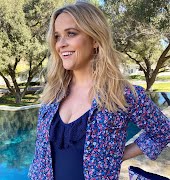 Image / Self / Real-life Stories
SELF, STYLE

Sometimes choosing an outfit is simply about getting dressed, but other times it’s about so much more.

Sophie White talks to transwomen Aoife and Laylah about style, identity and being yourself.

How do we find our style?

It’s impossible to boil this down to any one thing. We cadge ideas from our sisters, our friends, our friends’ sisters. We pick over magazines and, magpie-like, assemble the hundreds of tiny details and broader impressions that will eventually make up our aesthetic.

Many of us struggle with this process, though for the average cis woman [cisgender refers to anybody whose gender identity corresponds with that assigned to them at birth], there are plenty of other cis women to be inspired by. Winona Ryder, Sophie Dahl and Courtney Love were my teenage style coven. My “look” – it may be a shade generous to call it that – was a devoted approximation of these women’s style.

But consider never having had that – no inspiring people with whom you could identify. Imagine instead that in place of influence and representation existed hostility and antipathy. Trans identity is slowly penetrating mainstream culture. In 2014, Amazon Prime series Transparent became a landmark moment in TV for telling trans stories and giving work to trans performers like models Dara Allen, Casil McArthur and Andreja Peji. So what’s it like to find expression amid oppression?

Aoife Martin began presenting as a woman in her teens in the 1980s in Dublin but didn’t come out as trans until she was in her forties. She Tweeted about coming out in work at Dublin’s Mastercard offices, and since then she has become an advocate for trans issues, speaking at events and on the radio about #AcceptanceMatters, the Mastercard campaign to promote inclusivity. “I could’ve kept quiet, but I don’t want kids growing up ashamed to be themselves, the way I did. I grew up in an era when it was shameful to be trans. We were represented on television as either serial killers (Silence of the Lambs) or victims of serial killers; there were drag queen comedians too. Representation matters and positive representation really matters. When I used to dream of transitioning, I thought I’d wear short skirts and high heels, but it’s not like that at all. I’m happy in slouchy leggings and socks. Comfort is key,” explains Aoife.

The comfort factor seems, in this instance, to go beyond the practical. It’s the solace of realising that your physical identity, at last, aligns with your true, authentic one. “My big thing used to be not being seen as trans, but as woman,” explains Aoife. “It’s when I stopped caring that people stopped noticing. I don’t get stares now. I’m not sure if that’s because I ‘pass’, but I don’t care, and that’s the secret.”

Finding her way around the world of women’s clothes and make-up was tricky, as the kind of knowledge usually handed down from mothers and older sisters was not forthcoming. “In my teens, I loved the look of The Bangles,” says Aoife, “but rather than dressing up, I always dressed down. I grew up in a small village, which wasn’t the place to try out things. I just wanted to fit in and not get noticed. As transwomen, we have to find our own way, we have to navigate, to break in,” says Aoife. “I know a lot of transpeople who find it difficult to go into high street stores. It can take years to build up the confidence to do that. It can also take years to build up the courage and confidence to know what you want and what suits.”

For many years, Aoife avoided her office Christmas party. “After I transitioned, I felt I could finally go because I could wear what I wanted and feel comfortable in my own skin. Last year, I had my hair and make-up done. Cis women take these things for granted, but I’d never experienced this before. But I just went for it, and it was so liberating.” 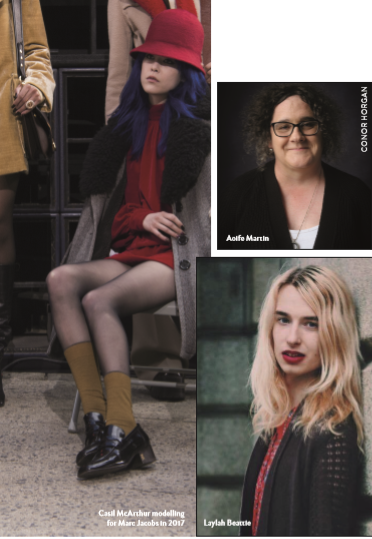 For 21-year-old Irish model and author Laylah Beattie, the route to asserting her individual style was surprisingly straightforward. From an early age, she was wearing women’s clothes and lipstick, she explains. “I was identifying as a boy because I didn’t know what being transgender was, but I was wearing female clothes and carrying handbags since about the age of 12. By the time I socially transitioned at 17 or 18, I’d already carved out my identity. I knew what colours suited me, what fashion I liked.” Laughing, she describes her style as being “aggressively feminine” from her early teens on. “People [in school] got used to me pretty quickly. It started with highlights in my hair and then once I realised I could bleach it at home, you couldn’t stop me.”

Growing up in a small town and attending a school considered to be quite rough, Laylah did have difficult and traumatic encounters, but she credits her love of reading and culture with helping her to develop a strong sense of self and a unique style that mixes distinctly Stevie Nicks vibes with shades of grunge. “I gelled with quite a popular group in school, so I had a safety net with them. If I was on my own, people would sometimes try to intimidate me. I would lose myself on Tumblr too. At 10 and 11, I was reading about people who were non-binary and who were pushing the boundaries of gender. It’s funny, though, in all of that time, I never stumbled upon a transwoman. I think if I had, I would’ve just gone,‘Oh, that’s me!’”

Caitlyn Jenner was Laylah’s first experience of a famous transwoman. “It’s getting better, though… every time I open Vogue, I see Hari Nef – a trans model who is just so amazing. When I began working here in Ireland as a model, I was only ever booked in for “alternative” shoots. But when I’d arrive, the photographer would be disappointed because I didn’t look alternative enough. I felt people didn’t recognise that I could just be an editorial model. That’s been very difficult to accept. We’re not moving in that direction yet in this country.”

Laylah’s personal style evolved organically, even while she was identifying as male. As she’s gotten older, she’s found shopping the high street relatively easy, even at 6’ 3” – “My friends think I’m so lucky, I always do well in the sales. I love Mango; TK Maxx is really good for women’s jeans with long legs and for long cardigans, so I will always have a soft spot for that shop.” Recently, Laylah was the first trans model ever to walk in the L’Oréal Colour Trophy catwalk show. “There were people in that room who are queer and part of the LGBTQ+ community, and so many of them came up and congratulated me. It really felt like something to be in that show.”

Follow Aoife on Twitter @aoifemrtn and Laylah on laylahtalks.com. This article originally appeared in the May 2019 issue of IMAGE Magazine. Photography by Jason Lloyd Evans and Unsplash.

How to face the end of days

“If this is it, then shouldn’t we drink in all the joys this wondrous planet we live on has afforded...

Mom is the loneliest number: Why we need Tinder for mums

Never underestimate the value of a good mom friend – someone you can talk about detailed sleep schedules with and...

Along with the Juicy tracksuit, the scrunchie and the anklet, the French manicure nail trend is ready for its modern...

Platelet-rich plasma (PRP) therapy, also known as the “Vampire Facial”, favoured by Kim Kardashian, brings life back to the undereyes.Possibly...

Mother-daughter relationships are hard. Yes, they can be rewarding, fulfilling, enriching and fun but they are also hard. There’s a...

Unsolicited sexts: ‘Why should we stay silent over the unacceptable actions of others?’

Broadcaster Muireann O’Connell has had enough. After continually receiving unsolicited sexually explicit messages on social media, she’s urging us all...

‘I was embarrassed’: Britney Spears speaks out after court appearance

The singer took to social media to try to explain why she felt she had to pretend to followers and...