For far too long, the concerns of women have fallen on deaf ears when it comes to the Irish health service.

In March 2021, the Coombe Women & Infants University Hospital launched the first dedicated clinic for the treatment of endometriosis, facilitated by a consultant-led multidisciplinary team with representatives from Physiotherapy, Dietetics and Pain Management. The Coombe’s Endometriosis Clinic will serve women who have received an objective diagnosis of endometriosis. From the March / April 2020 issue of IMAGE, endometriosis sufferer Kate Brayden says it’s time the condition is given due attention.

Four years ago, at the age of 21, I woke up with visceral burning pain all over the lower half of my body, and life has never quite been the same since.

An estimated 155,000 women in Ireland are affected by endometriosis, a disease as common as diabetes yet consistently underdiagnosed and poorly understood. The chronic inflammatory condition involves tissue – similar to that which grows inside the uterus – growing on organs outside of the womb. A hysterectomy is not a fix for endometriosis; in fact, there is no known cause and currently zero cure.

Less than 2.5% of publicly funded research is dedicated solely to reproductive health, though roughly one in three women will suffer from a gynaecological issue. Anyone, not just cisgender women, can have the disease, contrary to myth.

The fact which always halts me in my tracks, however, is that it takes an average of nine years to achieve a diagnosis of endometriosis, regardless of what country you live in.

I use the word “achieve” in terms of obtaining a diagnosis because it is truly a victory to reach this point. Symptoms of this disease can range immensely, fluctuating with hormone levels in the body, but painful menstruation, fatigue, brain fog, constipation, infertility, as well as pain during bowel movements, urination and sex are the dominant features. 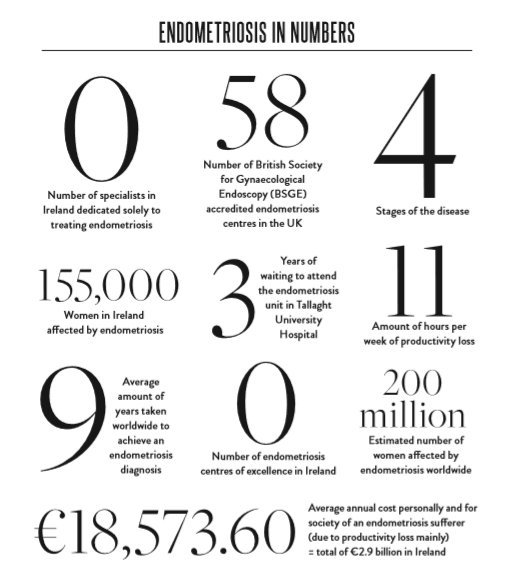 I was 21 years of age and in San Francisco on a J1 visa – a time when everyone else was worried about frat parties – when my chronic pain began. Once back home in Ireland, I saw numerous GPs who shrugged me off and told me my crippling pain “would burn out eventually”, blaming stress or contraception despite evidence to the contrary.

Most esteemed consultants shooed me out of their office and charged me unethical amounts after I waited months to see them, offering me no solutions or pain relief. After resorting to A&E, I was told that months, if not years, was the average wait to see a consultant gynaecologist who might not even be capable of helping me.

By the time I was offered nerve pain drugs instead of Panadol, I had already suffered through months of 24-hour burning pain and deteriorating mental health.

After more than two years in Ireland’s healthcare system, I flew to London to see Professor Wendy Reid, an esteemed professor of gynaecology, who was shocked at the low standard of testing and lack of care I had received; she prescribed Lyrica for me. This drug was the first thing to give me relief from pain in 24 months, yet the cause of my pain remained unknown.

Back in Ireland, I had to beg a gynaecologist for a laparoscopy to test for endometriosis after I demanded to have my periods stopped, realising my pain was significantly worse during my cycle. He charged me hundreds of euro only to tell me that the pain was all in my head, which was when I gave up on the system in Ireland.

I lost count of the number of doctors who told me that my pain was inexplicable.

When I spoke to other women about their Irish healthcare experiences, I saw that theirs resembled my own. The endometriosis unit in University Hospital Tallaght has a waiting list of three years, with Dr Aoife O’Neill having to balance her time between this unit and her other gynaecological work in the Coombe.

For many women, three years is far too long to wait, especially because this referral may have only arrived after a significantly long amount of time.

Aimee Brown, an endometriosis sufferer and health activist, describes her own experience of trying to get pain relief over the course of 16 years. “On many occasions, I was treated like an addict,” says Aimee. “The A&E department accused me of being there only for strong medication when it was the endometriosis specialist nurse who advised me to come to A&E for pain management in the first place.”

At the Dáil press conference and debate, in December 2019, held by Gino Kenny TD and the Endometriosis Association of Ireland, what became immediately clear to me was that my privileged upbringing was the only reason I had been able to successfully secure reduction in my pain over the last four years; if I hadn’t had the finances and support of my family, I could never have attended consultants across the UK and US, or even private pain clinics in Ireland.

This illness is heartbreaking, especially because of the funds needed to tackle it, and the inequalities it therefore highlights. Dr O’Neill explains that under her HSE employment contract, she is obliged to dedicate time as a gynaecologist in the public sector, dealing with urogynaecology, incontinence and antenatal patients.

This means that she cannot focus entirely on the endometriosis unit. Oncologists previously were trained in laparoscopic surgery before the National Cancer Care Programme was set up. “The creation of the National Cancer Care Programme here in Ireland took those cancer surgeons away from being able to utilise their skills for people with complex, benign gynaecological conditions like endometriosis,” explains Dr O’Neill.

In terms of treatment, Ireland simply doesn’t have the resources or the medical training provided for any gynaecologists to specialise. I queried Kathleen King, chairperson of the Endometriosis Association of Ireland, on the credentials needed to qualify as an endometriosis specialist.

“Traditionally, gynaecologists would build a reputation for treating endometriosis if they had taken an interest in seeing a large number of women with the condition. This does not in any way infer that they are expert or skilled in laparoscopic excision, surgery, or removal of the disease,” explains King.

Speaking to expert laparoscopic surgeon Dr Chris Mann in Birmingham, he expressed his shock at Ireland’s services: “I have witnessed an increasing number of Irish patients coming over to my clinic. I was amazed when I heard about the waiting lists in the public health system. If people come to me, they can be seen within two weeks.” My treatment abroad was staggeringly superior to any care I received in Ireland.

After three years, I decided to book a flight to Washington DC to see Dr Andrew Goldstein, a legend in his field of female pelvic pain. He diagnosed me with congenital neuroproliferative vestibulodynia, which is essentially being born with a ridiculous amount of inflamed nerve endings in your pelvis.

After I accepted his offer of surgical treatment to remove tissue containing the most nerve endings, he discovered black tissue during the procedure. It is currently being tested by a histopathologist specialising in this area in London, and I have been referred to see neuropelveology specialist Professor Marc Possover in Switzerland. This will be my last opportunity to finally discover the root of my pain, so hopefully the best is being saved for last.

The Scally Report of 2018 following the CervicalCheck scandal spoke of “institutionalised misogyny” and the “culture of paternalism” leaving women in the dark regarding their own health, and it’s hard not to compare this situation with the current state of endometriosis treatments in Ireland.

What endometriosis activists and the Endometriosis Association of Ireland have consistently campaigned for is an accessible, public centre of excellence, to be set up with expert laparoscopic surgeons. My hope is that someday soon in this country, those of us who are in pain can swiftly access experts in a centre where doubt doesn’t enter the room along with the doctor, and suffering is never dismissed.

This article originally appeared in the March/April 2020 issue of IMAGE Magazine.

Mandy Moore says her pregnancy was ‘unexpected’ due to endometriosis

An in-depth look at endometriosis: Causes, risks, symptoms and treatments

It’s time to redefine being ‘hormonal’

Endometriosis: ‘My pain is real’

An in-depth look at endometriosis: Causes, risks, symptoms and treatments

Lena Dunham Reveals She Had A Hysterectomy Because Of Endometriosis

‘I had to retire from work at 29 on medical grounds. I was devastated’

‘It got worse and worse’: Why don’t we take women’s pain seriously?