Endometriosis: ‘My pain is real’

Abby Norman, 26, is an American science writer and a patient, advocate and speaker for the Endometriosis Foundation of America. In 2010, during her second year at university, her weight dropped 40 pounds and she sprouted grey hair from her temples. She was repeatedly hospitalised in excruciating pain, but the many doctors she saw insisted it was all in her head. Unable to get out of bed, she had to leave school, returned to her home state of Maine with little money, and embarked on what would become a years-long journey to discover what was wrong with her. It wasn’t until she secured a job in a hospital, educating herself over lunchtime reading in the medical library, that she found an accurate diagnosis of endometriosis. Her memoir shows that women’s bodies have long been the battleground of a never-ending war for power, control, medical knowledge, and truth, and calls for the recognition of all women’s health issues.

Your experiences with endometriosis led you to have to leave school – how did that make you feel, especially given you were on your own after emancipating from your parents at 16?
It’s been hard for me to come to terms with. I’ve loved school my entire life, and was especially at home in college. Of all that I’ve lost, that’s been one of the most difficult things to endure. The sting of it hasn’t become less so with time. It’s largely internal – it’s just part of my identity, my love of learning and general feeling of being at home in that setting – but also a response to larger sociocultural expectations. Even now, when I read reviews of my book or people speak about it and they refer to me as a “college dropout” – that stings. It makes me wince. My friends say things like, “Whatever, you wrote a book!” but that’s apples and oranges to me, really. I still feel like it’s a monumental failing, even though I know it wasn’t so much that I failed, it’s just that it was taken away from me.

And you turned that situation into a positive thing by channelling your experience into trying to change the way doctors listen to women – tell me about how that came to happen?
Once other women started saying, “That happened to me/my sister/my best friend” or they would say, “I’ve literally had that exact conversation with a doctor before” – it was impossible for me to think, logically, that I was the only person going through this. And in a way, there was a sense of validation. I mean, if we’re all having this exact same experience, we can’t all be wrong. We can’t all be making it up. Strength in numbers, right? But I was also overwhelmed, and I still am, by how much these stories affected me.

What were the greatest stumbling blocks you faced as a patient, and can you tell me about the challenges you still hear women face?
It really does seem to begin and end with just being heard. Even now, I’m still having these same conversations with doctors. And it eats away at me, even still. I mean, here I am, I’ve got this medical record. I wrote this book. I’ve heard all these stories. I’ve talked to all these women. All these people, really. And still, because that power dynamic between patient and doctor is so intense, I still have conversations that leave me wondering if it’s all in my head. Even as I’m staring at the evidence to the contrary. Because if you hear it enough, from an authority figure, from society, wherever it’s coming from… and it’s loud, and you’re very tired… it does just wear you down.

Your site started a conversation about women’s health and got women to share their own experiences with menstruation, PCOS, endometriosis, and menopause. What are you hoping the book will achieve?
Ultimately, I felt like all I had to offer was my story, in the hopes that it would create a space for others to come forward and say, “you know, yeah, me too”. And then tell their stories. And let it become a conversation. I don’t have the physical ability or mental energy to do the kind of fighting that’s needed. That, I would love to do. I hope the book can be a tool, and that it can go where I can’t go. Do what I can’t do in some small way.

How would you like the way in which we discuss women’s health – in the GP, in the media, in life – to improve; what are we not talking about that we need to now?
To me, it’s really more than asking doctors to admit they’re wrong, or that the medical establishment, the larger sociopolitical landscape, harbours this deep bias. Doctors also need to be willing to admit when they don’t know. I think they’re often so afraid to do that – which is a reflection of the larger challenges in healthcare that exist, particularly in the US.

What do you think would surprise people most about your findings?
I think what will be remarkable is how little of it actually comes as a surprise to people, women in particular. I think, though, that for those who haven’t lived with this kind of knowledge, who aren’t chronically ill, or in chronic pain, or haven’t been at the receiving end of what can be a great deal of injustice in navigating a healthcare system that is largely accessible through one’s economic privilege, there will be something of an awakening.

To someone who doesn’t know what endometriosis is really like, how would you describe living with this?
Any condition that’s chronic, especially where pain is involved, is exhausting. Often, more so over time. And it’s exhausting in more than the physical sense. You have to devote so much energy to planning how you will live through a day. This work generally goes unwitnessed. It can be very isolating, frightening, frustrating… but above all else, just thoroughly exhausting.

What, if anything, has really helped or worked for you personally?
I have found strategies to manage pain and other symptoms day to day, but the nature of most chronic conditions is that they change over time. Your quality of life changes. Things that used to work for you no longer do. Or perhaps you can no longer afford them or they become inaccessible to you for another reason. For me, I’ve always found that deep penetrating heat helps. I take a lot of baths. I wrote a great deal of my book from the tub and am, on any given day, doing work from either a hot bath or, on very bad days, from my bed, with a heating pad and antiemetic medication.

And what advice do you have for women experiencing severe pain without a diagnosis?
It’s incredibly difficult to trust yourself when you’re constantly being told that you’re wrong, or being gaslit about your own body. Your own experience and perception of your body. But you are the only person who lives in your body. And that truth is yours. At times, it will be all you have. It’s your peril and your power. 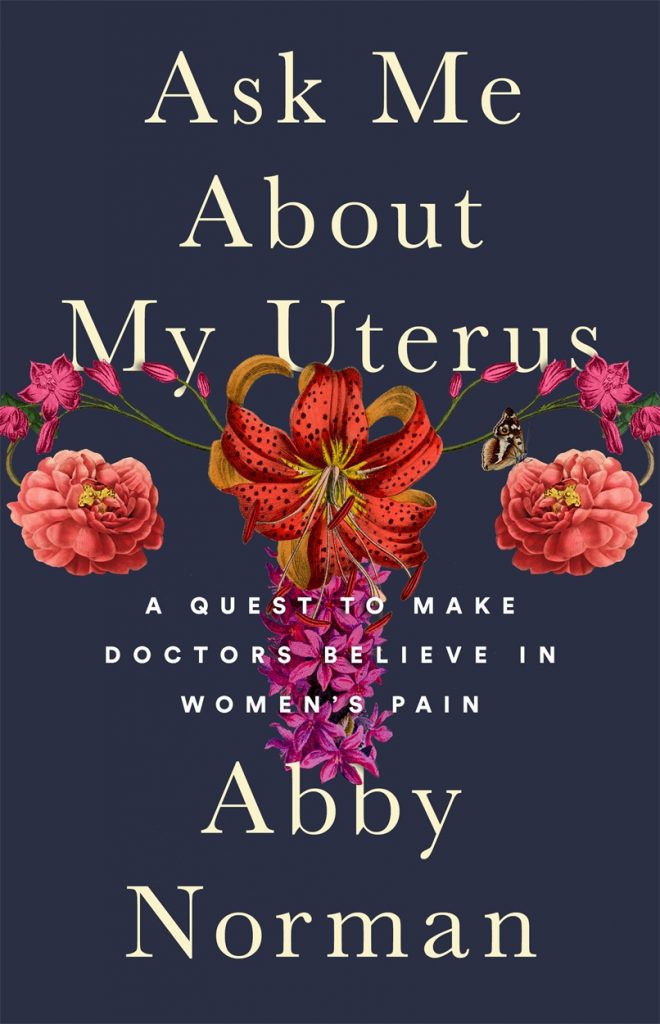 Ask Me About My Uterus: A Quest to Make Doctors Believe in Women’s Pain by Abby Norman (Nation Books, approx €23) is out now.