‘It got worse and worse’: Why don’t we take women’s pain seriously?

Have you heard the story of a woman going to the doctor about a health problem she’s having only to be ignored or brushed aside? You’ll have been in this scenario more than once is the truth; this story is not a new one, for so many women, it’s a grim reality

Research has consistently shown that doctors don’t take women’s medical problems and their pain seriously. They are less likely to believe that a woman is experiencing the pain she says she is, instead believing her to be being dramatic, or the favoured term, “stressed.” As a result, they are more likely to misdiagnose physical problems as being mental or emotional. To give you an example, artist Aubrey Hirsch has brought some of these stories and studies to life with her comic Medicine’s Women Problem. It tells the story of her own experience of Graves’ disease, a condition that causes an overactive thyroid gland, which took her five years to get diagnosed. 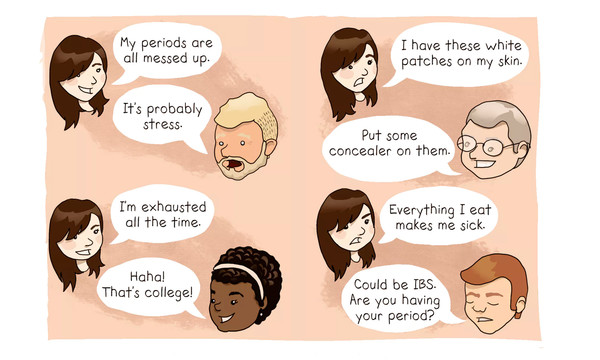 And yet figures continue to show that women are less likely to go and get a pain issue diagnosed, especially if it involves an area of the body such as the vulva or vagina.

Meave,* who recently turned 30, told IMAGE that she has been dealing with chronic health issues; namely pelvic pain and painful intercourse for over a decade. She said that it’s taken her years of her life to even come close to getting a treatment plan. “Because I have something that isn’t widely known – Meave has something called ‘Vulvodynia,’ also known as vulvar vestibulitis, a condition whereby women experience burning and soreness on the vulva, sometimes just from lightest touch on the area. Symptoms can be provoked or unprovoked – I was met with a lot of blank stares when my symptoms started years ago.”

“I found it very difficult to talk about, namely because I think the gynaecological services in Ireland are way behind where they should be in terms of the UK or US and because I felt I wasn’t taken seriously because my pain hadn’t many physical symptoms. I must have seen 10 doctors and spent an unbelievable amount of money before I got an option – outside of this country – that wasn’t, ‘it’s probably just in your head,’  ‘try to relax more,’ or, ‘it must be due to stress’ or even ‘have a drink before you have sex and it’ll help.'”

How do you explain adequately to a doctor that you can’t even insert a tampon without knife-like pain occurring? I know a few women who have these symptoms and the fact that we are getting dismissed by health professionals is deeply alarming and unfair. What I want to know is, would a man be left in pain the same way? I think we all know the answer to that.

And it’s not just doctors; generally, people don’t take women’s pain or health problems as seriously as a man. Just look at writer and actress Lena Dunham. She frequently speaks about what it’s like to live with chronic pain. She’s spoken out about her history with endometriosis and subsequent hysterectomy at the age of 31, as well as her battle with another disease: Ehlers-Danlos syndrome.

“This is what life is like when I’m struggling most with chronic illness. An Ehler[s]-Danlos syndrome flare means that I need support from more than just my friends… so thank you, sweet cane!”

Sia took to Twitter to share her struggles with the condition. “Hey, I’m suffering with chronic pain, a neurological disease, ehlers danlos and I just wanted to say to those of you suffering from pain, whether physical or emotional, I love you, keep going [sic],” she wrote. “Life is fucking hard. Pain is demoralizing, and you’re not alone.”

Hey, I’m suffering with chronic pain, a neurological disease, ehlers danlos and I just wanted to say to those of you suffering from pain, whether physical or emotional, I love you, keep going. Life is fucking hard. Pain is demoralizing, and you’re not alone.

Both women are not just echoing the continued battle for women to have rights over their anatomy, but the struggle that we continually face – to be fully heard and listened to when it comes to our own pain and health.  It’s important she says, to keep fighting on behalf of women everywhere.

In 2020, we are well past the point where we should have to scream to be taken seriously if we’re in pain, but we’ll keep going and keep shouting and fighting until our voices are heard.

More like this: ‘I am just hurting’: The thing to remember when talking about chronic pain

More like this: Exhausted with unexplained pain? You could have haemochromatosis

More like this: ‘Dry needling was a huge factor in helping me with my chronic pain’