In an unprecedented move,  Donald Trump has been permanently suspended from Twitter due to “the risk of further incitement of violence”

“After close review of recent Tweets from the @realDonaldTrump account and the context around them – specifically how they are being received and interpreted on and off Twitter – we have permanently suspended the account due to the risk of further incitement of violence,” the company said in a statement.

“In the context of horrific events this week, we made it clear on Wednesday that additional violations of the Twitter Rules would potentially result in this very course of action.”

Trump’s account was temporarily locked after the social media platform found him to be repeatedly violating its policies following Wednesday night’s riot at the US Capitol building in Washington DC.

Trump returned to Twitter late Thursday, in what appeared to be trying to calm the mayhem caused by his supporters but it was too little too late. 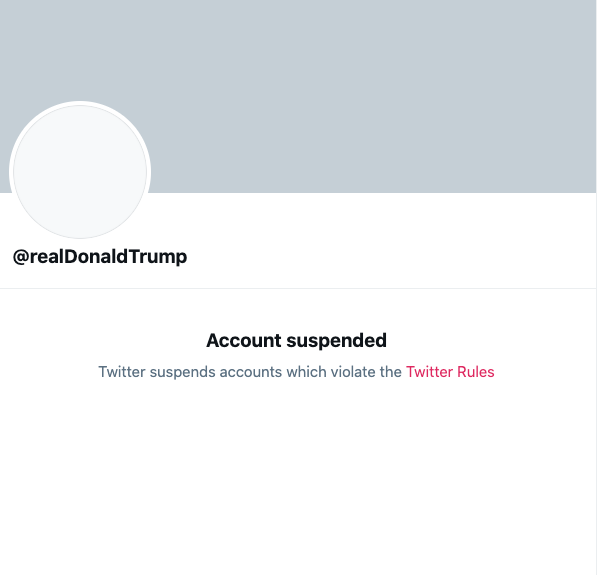 He acknowledged his presidency was ending and promised a smooth transition to Joe Biden, but shortly after Twitter permanently suspended the president’s personal @realdonaldtrump account, he tweeted from the @POTUS presidential account accusing the company of being in cahoots with the “Radical Left.” The tweets were quickly deleted.

Twitter explained in detail their reasoning for the permanent ban:

“The 75,000,000 great American Patriots who voted for me, AMERICA FIRST, and MAKE AMERICA GREAT AGAIN, will have a GIANT VOICE long into the future. They will not be disrespected or treated unfairly in any way, shape or form!!!”

“To all of those who have asked, I will not be going to the Inauguration on January 20th.”

Due to the ongoing tensions in the United States, and an uptick in the global conversation in regards to the people who violently stormed the Capitol on January 6, 2021, these two Tweets must be read in the context of broader events in the country and the ways in which the President’s statements can be mobilised by different audiences, including to incite violence, as well as in the context of the pattern of behaviour from this account in recent weeks. After assessing the language in these Tweets against our Glorification of Violence policy, we have determined that these Tweets are in violation of the Glorification of Violence Policy and the user @realDonaldTrump should be immediately permanently suspended from the service.”

Read more: What exactly is going on Washington DC: An explainer of the Capitol riots

Read more: US events this week only underline the necessity for a thorough investigation into the shooting of George Nkencho