Paul Costelloe’s London Fashion Week show this morning was an intimate and elegant affair inside The Waldorf Hotel in Aldwych. Elegance is what you expect from Costelloe, and it resounded throughout the collection, but there was more. Much more. There was a freshness and an unexpectedness to both the pieces and the styling that felt utterly modern.

Tweed, jacquard and wool were the textures that dominated and were quintessentially Costelloe, but in the mix this year was a PVC-like fabric that gave the sleeveless, turtleneck top-half of a full-skirted gown an incredible (and super-sexy) finish. This was red-carpet dressing for women who are confident in their choices and tired of predictable tulles. A high-waisted body-skimming tweed skirt with two thigh-high front splits was finished with two spectacularly sparse pieces of triangular leather over the model’s breasts. Sexy doesn’t begin to describe it. What a way to wake up on a dreary, drizzly Monday morning. The overcoats in navy wool with embellished sleeves and coloured tweeds were luxurious in their lengths and refined in their silhouettes. The usual Costello baby doll swing dresses appeared this year, but when worn with black over-the-knee boots and thigh-high socks, they felt sensuous and sophisticated rather than twee. My favourite piece in the collection was a simple but stunning plaid jumpsuit. There was nothing not to like about this effortlessly chic, timeless wardrobe staple. I’ll take two please… if only! 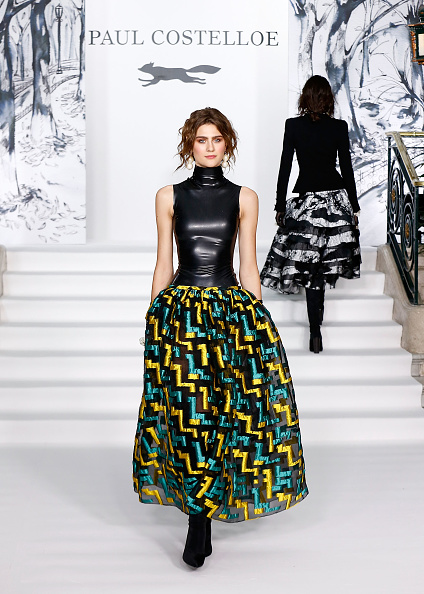 A model poses at the Paul Costelloe Presentation during London Fashion Week February 2018 at The Waldorf Hilton Hotel on February 19, 2018 in London, England.

It’s easy to think you can predict what Costelloe will produce each season, but both this season and last, he’s excited and surprised in equal measure. For a man who’s been doing what he does for decades, there’s a whole lot of life left in this brand.