In our partnership with Dove, IMAGE is on a mission to change how women view beauty. Scars, stretchmarks, lumps, bumps, curves and lines are all what make a body beautiful — something that we want to see reflected everywhere. We are asking friends IMAGE to reflect on their relationships with their bodies and how they have come to view the concept of beauty.

For Emma Sothern, the stares she received because of her hair loss over the past 22 years impacted both her confidence and her perspective on beauty. Here she talks about learning to embrace her body … and her inner diva.

I’ve had alopecia on and off for 22 years.

Don’t know what that is? Well, alopecia is an autoimmune condition – meaning the immune system attacks itself by mistake.

This attack focuses on hair follicles. They shrink to protect themselves, so that existing hair falls out and new hair can’t take root. This leads to widespread bald patches (alopecia areata), total hair loss on the scalp (alopecia universalis) or hair loss of the entire body – eyebrows, eyelashes, everything (alopecia totalis).

My first experience of alopecia was when I was 11. My mum had just died from Lupus – another autoimmune condition – and I guess the stress of losing her caused me to lose my hair.

That patch didn’t bother me. I had other things on my mind and it’s not like I cared about my appearance at that age.

‘Nothing to worry about’

But it became more of a concern when I went to boarding school. In a place with barely any privacy, I felt exposed most of the time. Not a great feeling, when you’ve a big ol’ patch of bald vying for attention.

So, my dad took me to the GP. “Alopecia,” the doctor said. “Stress-related… but not serious. Don’t worry about it.”

I looked at his wispy white combover – an attempt to cover his own prominent baldness – and thought, “well that’s easy for him to say. He’s old!”

Spreading upwards from the base of my neck and inwards from my ears, I could just about disguise the patches with an array of carefully placed clips. But playing hockey, running or swimming all became a mental game of “are my patches showing?” I won’t blame my ineptitude at sport on alopecia but let’s just say, my mind was often elsewhere!

Desperate for a quick fix, I turned to dermatologists and trichologists (hair doctors) – spending Saturday afternoons getting painful corticosteroid injections into my head. They helped, temporarily. But then they stopped working.

They left my scalp paper-thin and my immune system even weaker than before. (I was 16 and desperate. I didn’t think of the consequences.) 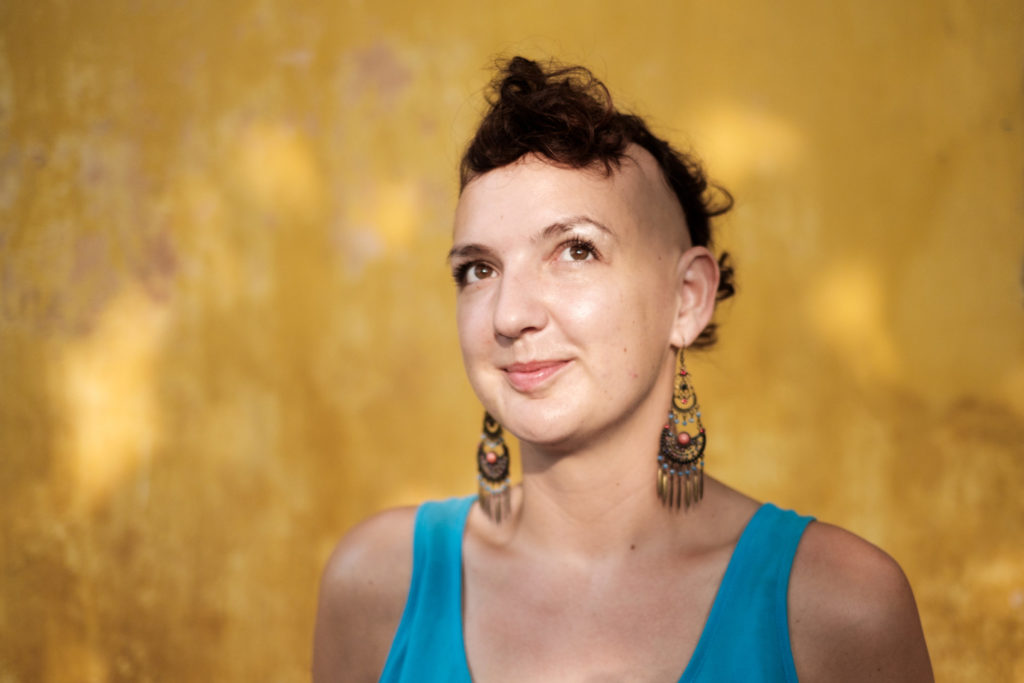 Here’s a timeline towards my bald truth:

Me at 19: Hiding under headbands

As a 19-year-old student, I was the girl who wore headbands. It was my look, and I was comfortable with it. Until my stretchy headbands couldn’t stretch far enough.

Me at 23: Finding love in Kenya

As a 23-year-old on her first big travel adventure, I was in Kenya volunteering for a mobile medical clinic. There I met Andy – who saw beyond the bald patches and loved me anyway.

Me at 24: Sticking to routine

As a 24-year-old playing house in Edinburgh with Andy, I asked him to stick hair extensions to my scalp every morning. It was our pre-work routine: “You boil the kettle, dear, I’ll get the sticky tape!”

As a 26-year-old copywriter, back in Dublin, I invested in a full wig. Because by then, my patches had grown too big to conceal.

That wig was everything I needed, for a while anyway. But eventually, the feeling that I was hiding, that I wasn’t being my true self – not to mention the headaches and the jagged scratches it inflicted on my poor noggin – got too much.

Me at 28: Enough was enough

I was sick of living what felt like a lie. Fed up with styling that bloody wig for hours to look like my old hair. And tired of still having to wear headbands over it, keeping it firmly in place so I wouldn’t have a heart attack with every gust of wind.

My favourite part of the day was coming home to our teeny Portobello flat after work. Before I was properly in the door, before I’d even taken off my coat, I’d fling my wig at Andy, whose bemused expression would quickly turn to one of sympathy, as I rubbed my aching head.

He disliked the wig even more than I did. He couldn’t understand why I’d waste so much effort, endure so much pain, when according to him I looked far more beautiful without it. Just being natural.

And one day, when I looked at my wigless self in the mirror, I thought: “Maybe he’s right. Maybe I am better off being 100% me.”

So, I asked Andy to shave my head.

I didn’t have much to lose. Apart from my remaining hair. Obviously.  I’d recently handed in my notice at work and the very next day, was due to fly to Indonesia for my first solo backpacking trip.

For the next two months it’d just be me. Me and a new, bald slate.

As Andy used a crappy pair of Boots clippers to rid me of my remaining curls, I felt a sense of freedom bubbling up. A sense of lightness. I was actually excited to see myself in the mirror. Would I suddenly turn into Sinead O’Connor?!

The answer was no, no I wouldn’t. 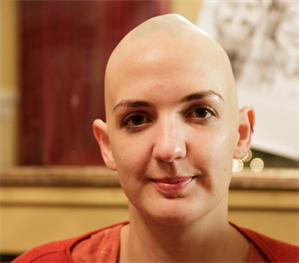 Unfortunately, the little hair I’d had before the big shave had been disguising a rather alarmingly large bump on my head. Without this hair, I looked decidedly lopsided. Mis-shapen. And the former shadow of this hair, impossible to get rid of, criss-crossed over my scalp like a cruel spiderweb. It wasn’t soft and pretty, like Sinead. Nor was it rocking or edgy. It was just – weird. And that excited feeling I’d had quickly sank right back down.

But I’d made a choice and there was no going back. So the next day, bald as a bumpy-headed eagle, I boarded a plane and set flight for the east. It wasn’t long before I realised that, as a Western woman travelling alone, I was going to stand out regardless of my hair or lack thereof.  I would be the subject of points and stares either way.

And whether I wore a headscarf or not I’d still get asked, fairly bluntly: “What’s wrong with your hair?” This direct approach was actually quite refreshing. It made it easier to talk about my alopecia without welling up. 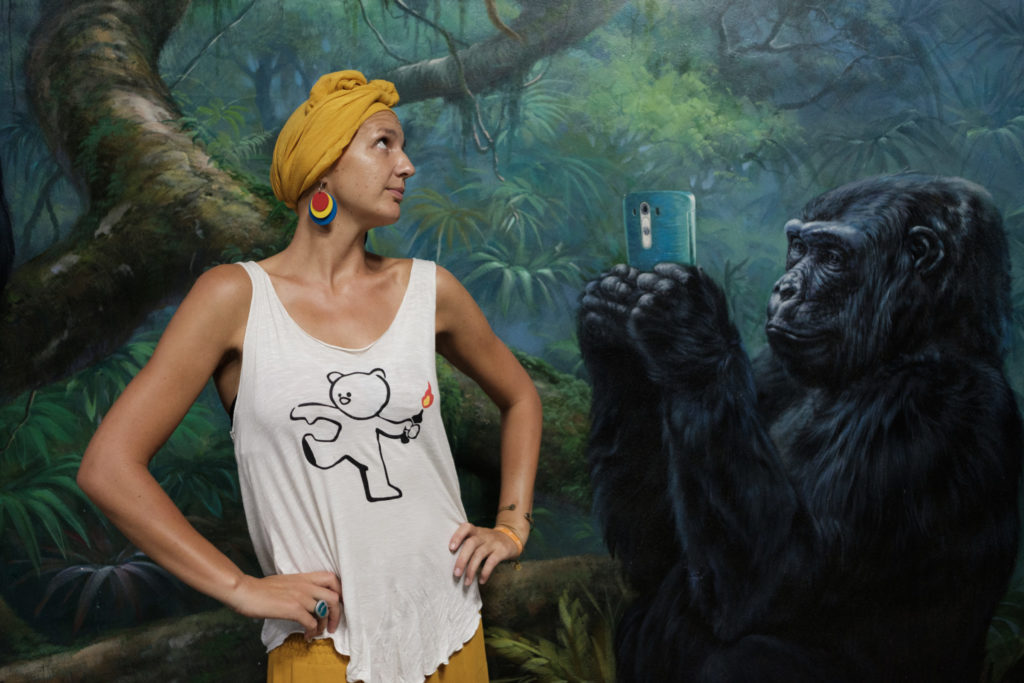 This openness also led to some amazing experiences. I received gifts of strange-smelling herbal concoctions – snail eggs and coconut being a particularly memorable one. I visited traditional healers for a range of other random treatments. Some of them worked, others didn’t. Either way, I began to accept my alopecia.

The weird thing is, before I shaved my head – when I covered my bald patches with clips, headbands and wigs – I felt more vulnerable. It was a constant sense of shrinking. Of hiding who I really was.

Whereas with my shiny head exposed, there was nothing to hide. My baldness was right there, out in the open. People could like it or loathe it. And that was their issue.

This new self-acceptance followed me home to Dublin when I came out of the hair closet and finally began speaking openly about my alopecia.

For the past five years, I’ve embraced the condition I used to hate. I’ve gone from a shy girl who’d hide under wigs to a woman who uses her head as a blank canvas to express herself.

Alopecia reignited my childhood love of glitter and fancy dress. Instead of hiding my patches, I decorate my odd floppy mohawk with feathers and fairy lights. I’m leaning in to and loving what makes me different.

I usually reserve these experimental looks for festivals, but even in my current home of Vietnam, I accessorise my balding noggin with mis-matched and colourful feather earrings. Or big heart-shaped sunglasses that Elton himself would be proud of. I’ve finally tapped into my own style and I don’t care what anyone else thinks of it. 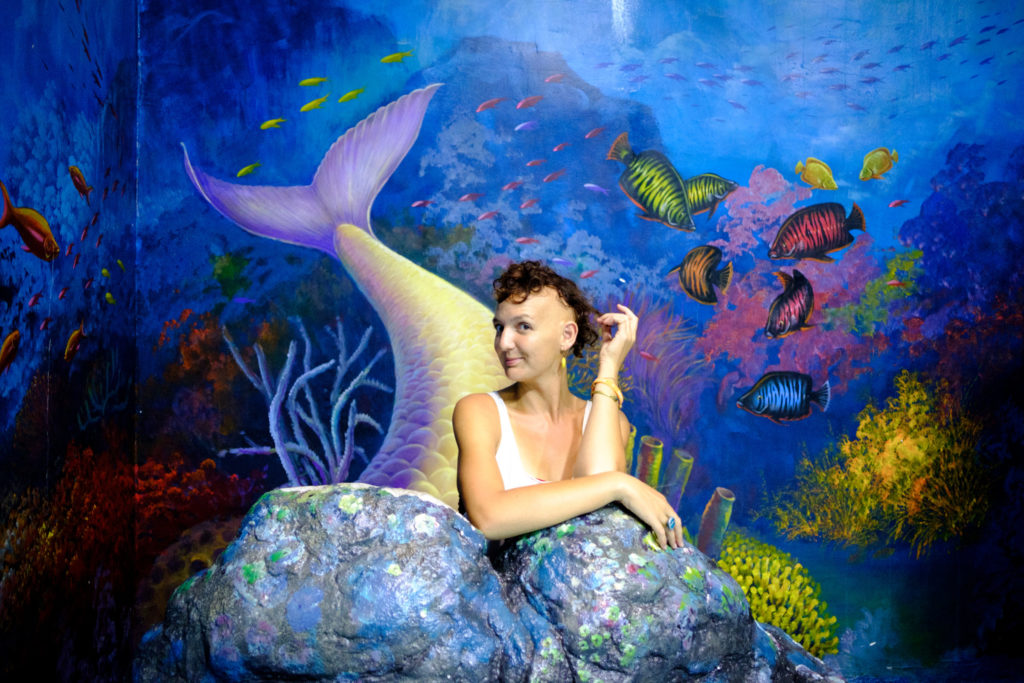 Alopecia has made me happier than I’ve ever been. Don’t believe me? Here’s why:

I’m happy that I can get ready in 10 minutes, with no hair to style. Andy’s pretty happy about this, too!

I’m happy that I feel like me, all of the time. (Yep, even in fancy dress!)

And I’m happy that alopecia has let me share my own bald truth – that bravery in the face of insecurity paints the prettiest of pictures.

That’s why I set up a hair loss website, Lady Alopecia. I wanted to empower other alopecians. To help them find that happiness, that acceptance.

Because I’ve learned that by accepting the things we can’t change, we’ve more room to grow and make the changes we can.

In my case, hair loss connected me with my inner diva: Lady Alopecia. She’s the Sasha Fierce to my Beyonce. (Not that I could come close to her Queen B-ship. Of course not.)

The goal of  the site is to inform and inspire those with hair loss. To find and express their own unique, beautiful self. And to change the notions of what makes us beautiful in the first place.

You might say someone has an attractive smile or gorgeous eyes. But it’s not about perfect teeth or striking features – it’s something much deeper, a self-acceptance that radiates from inside out.

Appearance alone does not equal beauty. Beauty shines as a result of a person’s energy, actions and kindness.

I’ll be honest. Sometimes I miss having long hair.

To toss over my shoulder, to feel more “girly”. But why do we associate femininity with long hair, anyway? Especially when we try so hard to get rid of hair from the rest of our bodies.

Still, I do miss it, once in a while. And there are days when I just want to blend in.

But I’ve made the decision to be Lady Alopecia. To embrace what makes me different.

Thanks to initiatives like #ShowUs, perhaps one day we’ll all embrace our differences. And be content with who we are, exactly as we are.

What a wonderful – and beautiful – world that would be.