In July 2014, Codilia Gapare from Chesire in the UK was diagnosed with breast cancer on the same day she had an interview with the Manchester Metropolitan University. The mother-of-two was offered a place and began her studies, but two months in, she found it difficult to balance studies while completing her treatment, and she had to drop out.

Related: Do not ignore this’: Vicky Phelan urges women
to listen to their bodies

While in recovery, Codilia had a brainwave: there were no fake eyelash options for cancer patients, particularly when they lose all their hair.

Her thought soon transformed into an actual product, called ‘C Lashes’. She then partnered with beauty brand Eylure, who have since released the lashes in Boots stores.

The lashes are specially designed with a larger, more flexible adhesive band, and a bigger surface area to help them stick to the lid; and when there are little-to-no natural lashes, this improves the process considerably.

Codilia wanted to create something that would help cancer patients feel more like themselves. In an interview with metro.co.uk she spoke of how difficult it was to lose her hair, saying, “being black, we always play with our hair. Losing my hair was a big deal. No one talks about how much hair you lose though. I lost my eyelashes, eyebrows, pubes, underarm hair.” 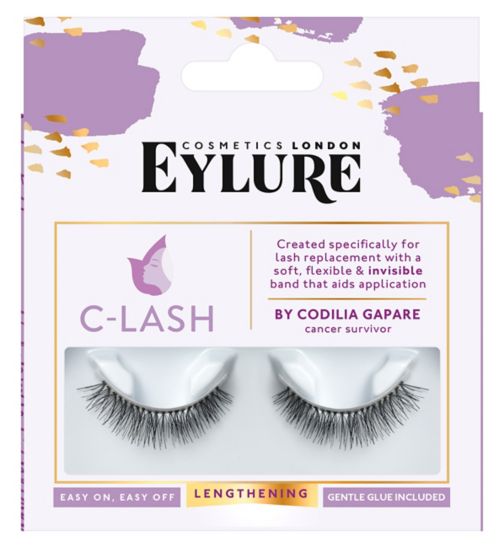 “But I wasn’t prepared to lose my lashes,” she continued. “When my lashes started to thin out, I bought fake ones, but I struggled because it took off all the remaining hair. I didn’t do it for attention, I just wanted to feel like myself. I just wanted to be me again.”

The lashes come in three different styles including ‘Naturals’, ‘Lengthening’, and ‘Volume’, and they are priced at €7.49 on boots.ie now.