This terraced home in Irishtown is flooded with light, thanks to a central axis

Getting light into an extended mid-terraced home is a persistent struggle; here Fishamble Architects introduce a central axis that solves this modern conundrum.

“When you’re an established practice, you’re probably in your sixties. Establishment comes late in the game in architecture,” laughs James Casey, who co-founded Fishamble Architects alongside Liam Mc Inerney.

The practice is very young – 2019 officially – but the pair met while studying in UCD, which they left a decade ago, and have been working together on-off ever since. 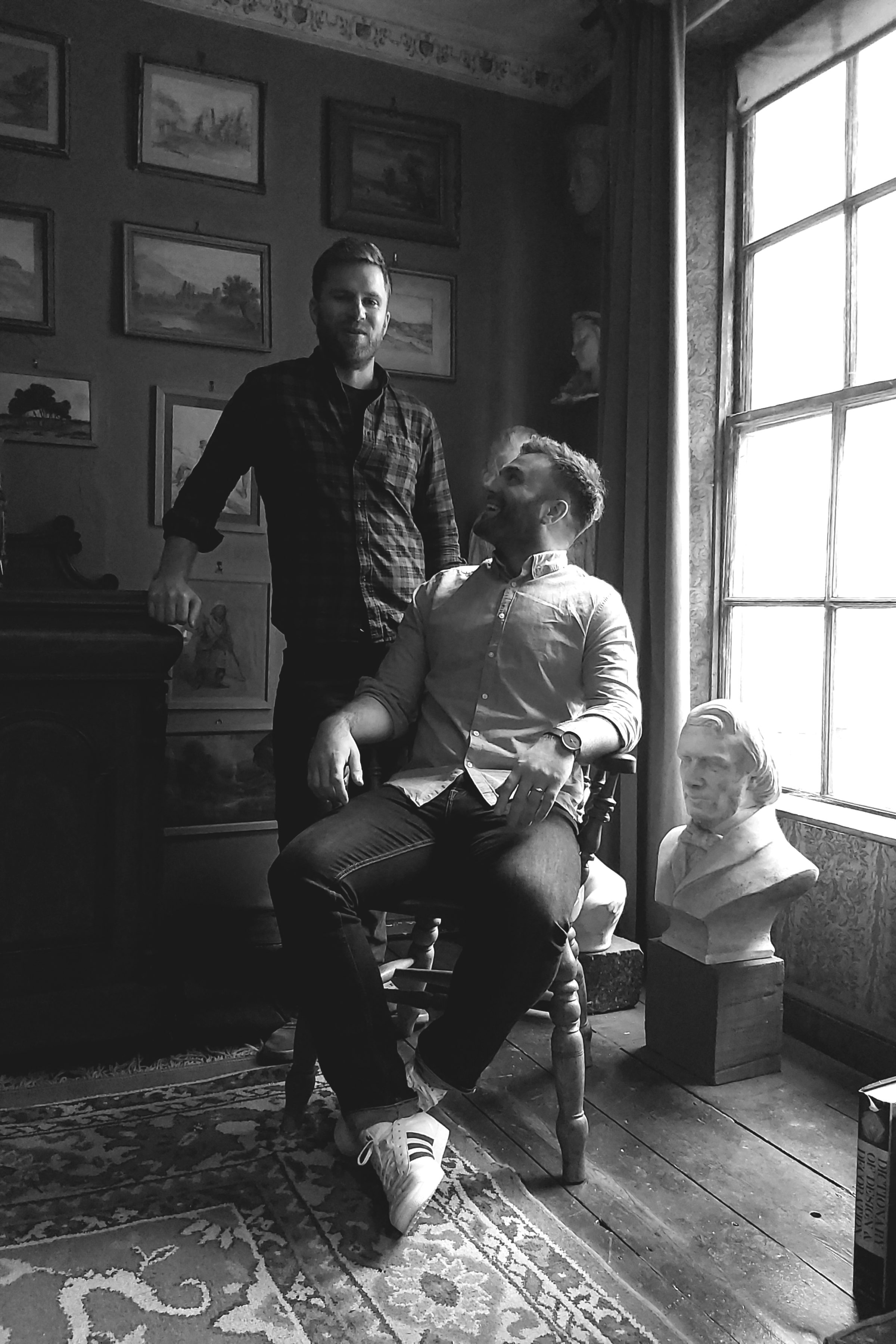 “Liam went to the UK to work for a bit and I stuck around here,” explains James. “We kept in touch and worked on various side projects and competitions together, but we were both working in different firms.”

“Over the years, we worked together when we could, but there was no set plan, it just kept happening that way,” adds Liam. “When I moved back from London, we were collaborating so much it just made sense to partner up and make it formal.” 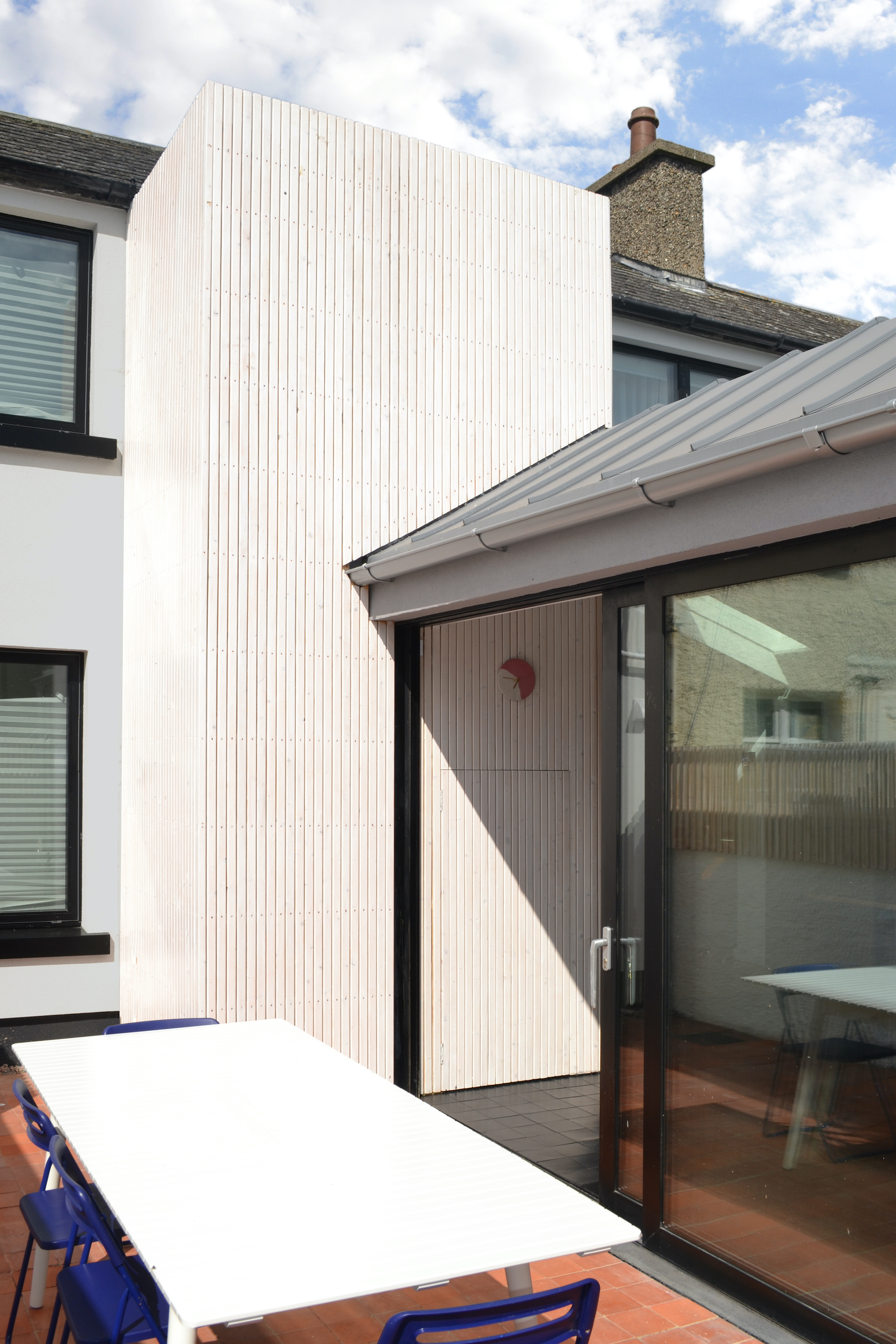 Recently, one of their residential projects, completed in late 2019, caught our eye for its clever solution to adding light and an extension to a mid-terraced property.

This former council house is in Irishtown, and the architects describe it as being “robustly built”, but that it was in “poor repair” when their client took ownership.

The brief was to make sure there were generous spaces as bedrooms, which saw them reduce three boxy bedrooms down to two on the top floor, and where the kitchen was previously on the ground floor became an office/bedroom, while a kitchen extension was then added to the rear.

“The client gave us reasonably free reign and we showed three or four different options to get to one that we were all happy with,” says Liam. 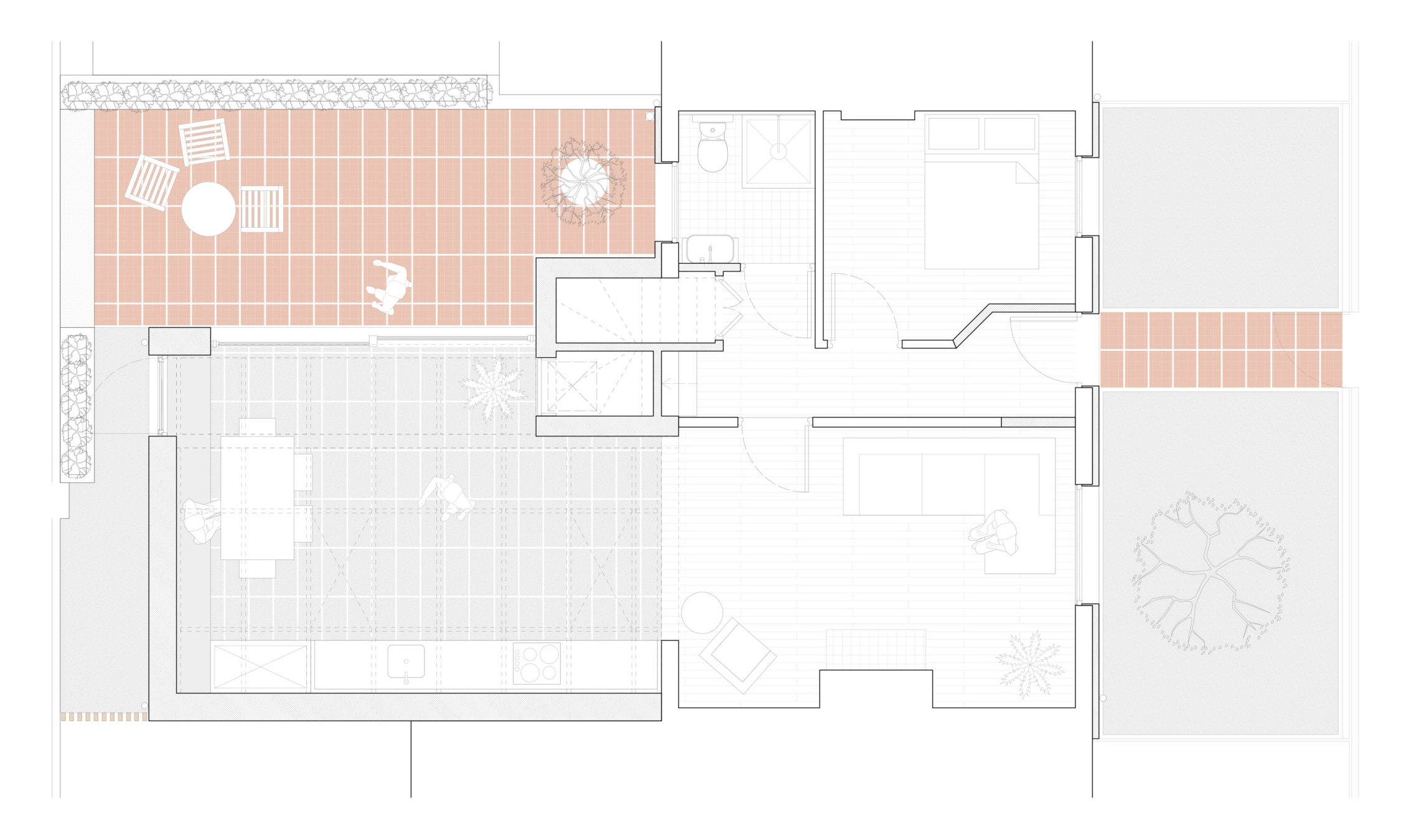 They started with removing a standard central staircase near the front door, and added a new staircase “effectively bolted onto the back of the house”, which the kitchen, courtyard and living room wrap around. The central axis has an almost flat glass roof – it is tilted to 3 degrees to allow rainwater to drain – and is clad in white deal externally, which Liam describes as a “very off-the-shelf, quite inexpensive timber” that they stained with an Osmo wax. 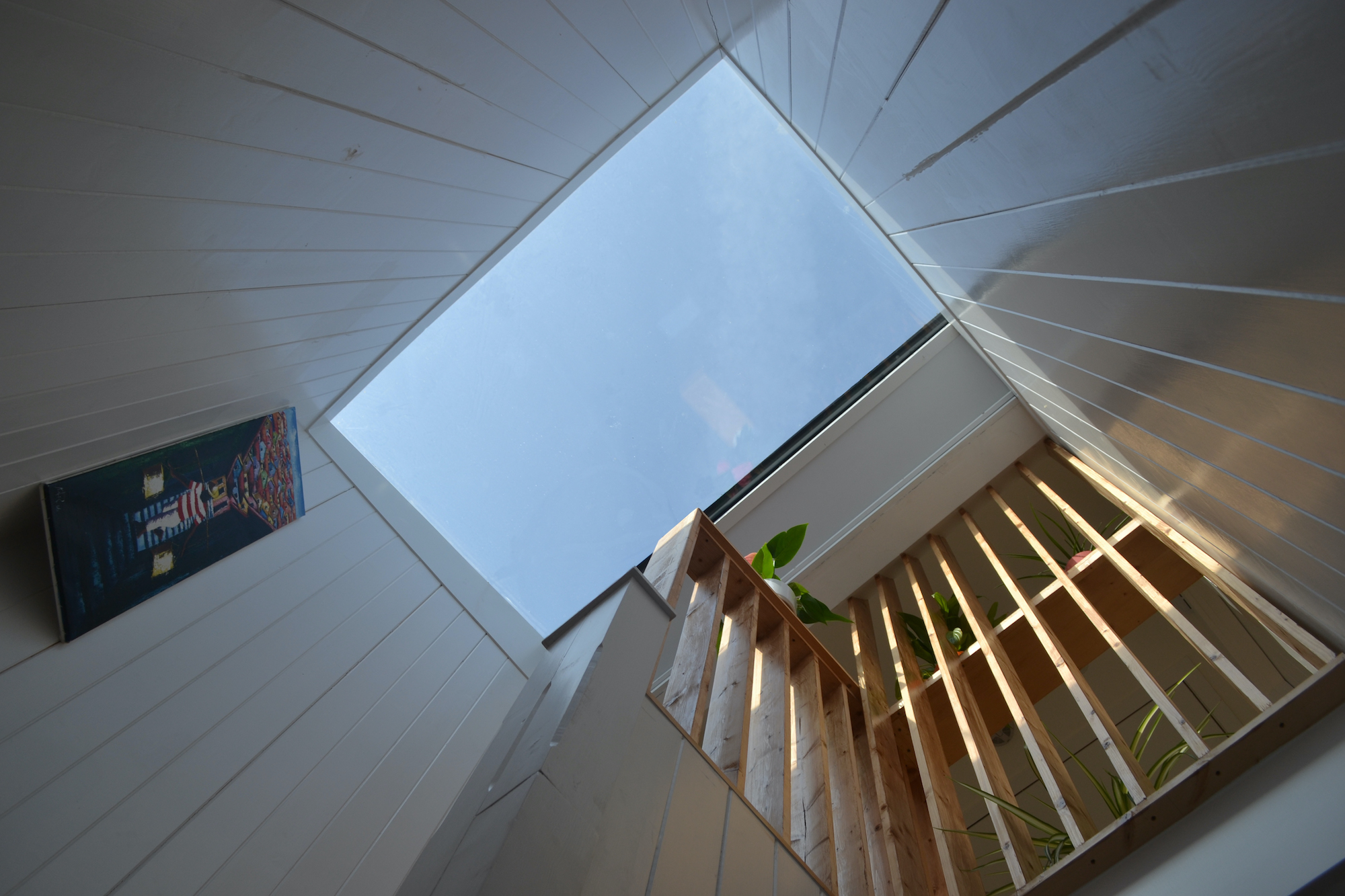 James mentions using it in the past, while in a former practice, on a house in Connemara and on a recent project in Blackrock. “It actually stands up pretty well in salt water conditions, so it should age evenly and gracefully.”

While often modern extensions on back plots will include a courtyard to allow light into middle spaces, sometimes you are left with a corridor, which Fishamble Architects wanted to avoid, particularly with such a small plot.

“I think what Liam worked quite hard to achieve with the plan was to ensure a kind of a sense of flow between the living and cooking and dining spaces, rather than kind of breaking that up into secondary elements,” says James. 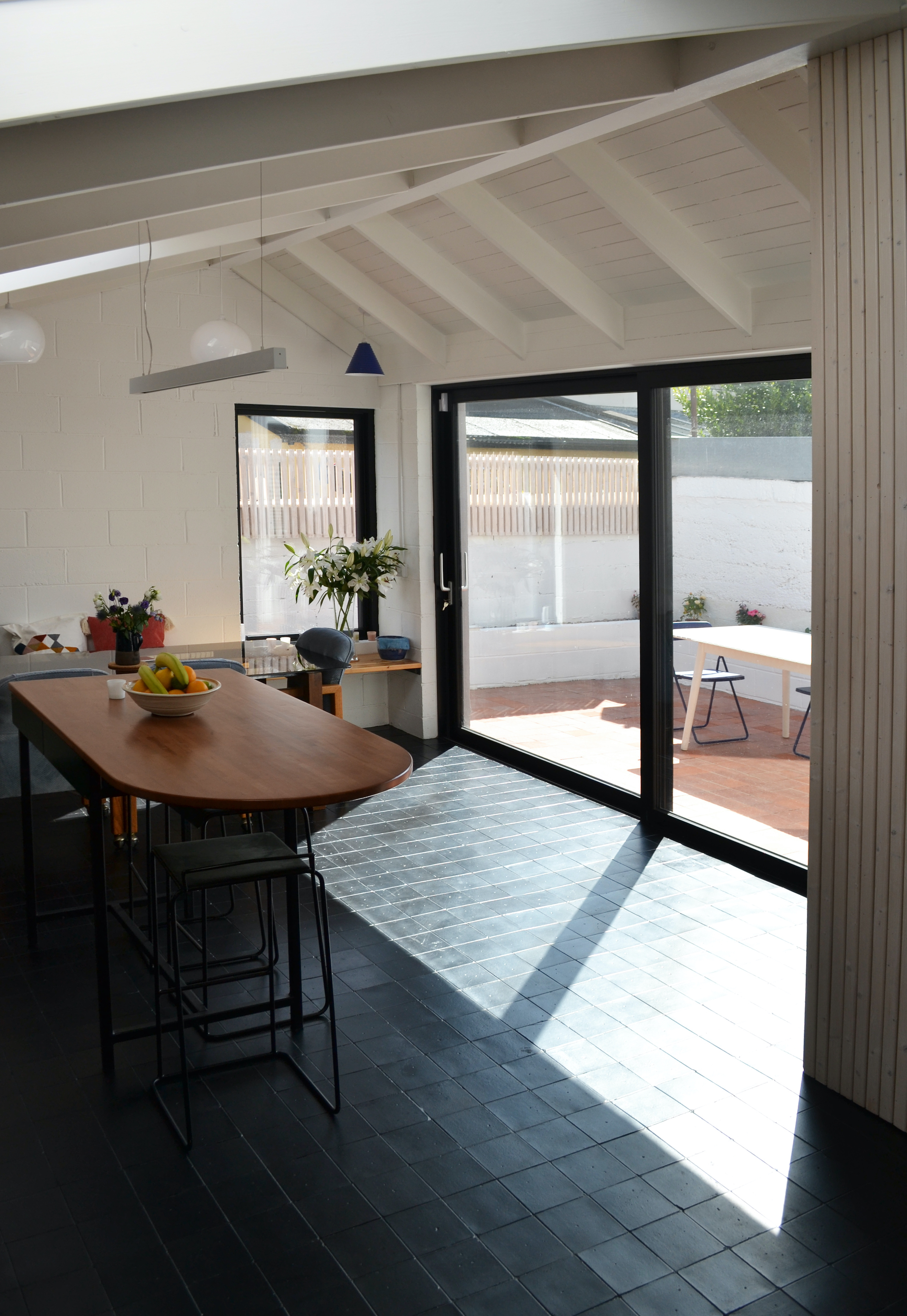 Using terracotta tiles, inside and out, helps with this flow, and Liam admits they were somewhat of a happy coincidence.

“We went to Landmark Architectural in Newcastle, County Dublin to look at a Douglas fir flooring that we used in the living room, hallway and downstairs bedroom, which was reclaimed from a convent I think,” he begins. “They just happened to have the black and red terracotta tiles on the day, and we had been looking for a stone or tile floor for the extension. We all liked them, it was a very easy decision.” 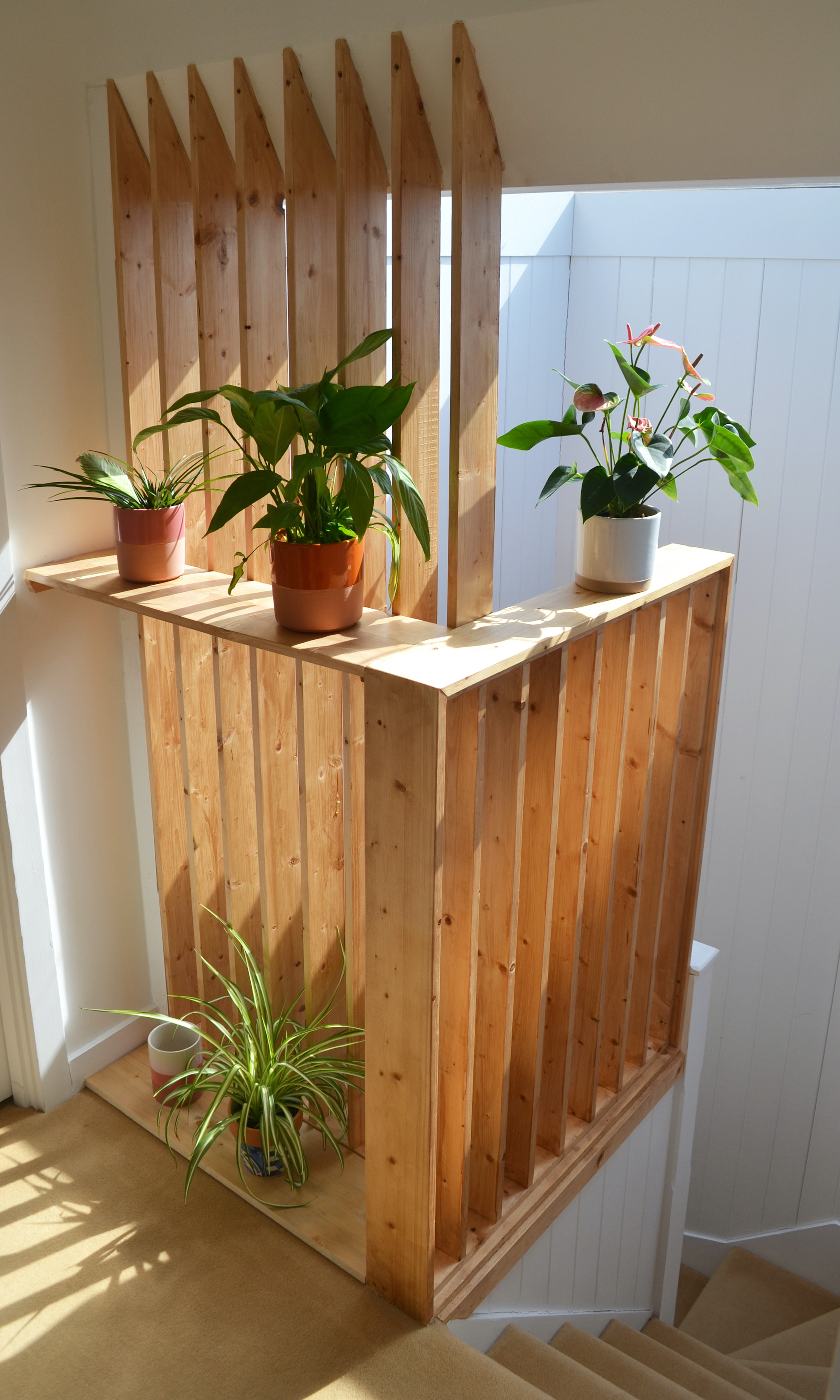 Exposing elements in the build was further discussed. “The client is from Limerick and her father a contractor. It was a discussion we had that he would’ve built a lot of extensions on their house when she was younger, and they were often, due to necessity, somewhat left unfinished,” says Liam. “She quite liked the idea of exposed block work and timber, so we went with it.”

It adds character to the newly build part, though Liam warns that although it seems you are saving on materials, often doing exposed block work can actually increase the cost on a building. “It’s more time-consuming, contractors need to be more careful with what they’re doing. When it looks easy and slapdash, a lot of planning can go in to make sure everything can be exposed.”

Thankfully, the client had a great relationship with the contractor and all parties worked closely to make sure it was reasonably simple. “Some of the block work isn’t pointed amazingly well, but we kind of like that, and once it was painted it, it works quite well allowing a bit of texture.”

Although you would expect the original house to be a little more aged and weathered, it went through such an extensive refurb, Fishamble Architects have almost flipped the order of old and new. “We made the older elements reasonably contemporary and well-finished,” says Liam. “It is a sort of a reverse contrast, where the new element is quite rough and textured, and the historic element is smooth and contemporary.”

Read more: This bright Dublin 8 extension is a masterclass in adding life to a house

Read more: Inside this extraordinary Portmarnock home with sustainable credentials

Read more: How an architect planned the layout of her own extension

Creative last-minute gift wrapping ideas to do at home

WIN an overnight stay in The Iveagh Garden Hotel