Why IMAGE Publications will #StandWithNurses

“We’re warning people. We’re trying to say this health service is not sustainable.”

“Trust us. Trust us now when we say this service is not good enough for you.”

Earlier this week, we spoke with two of the 40,000 nurses taking strike action this January. Citing unfair pay and understaffing as reasons for the strike, theatre nurse of 30 years Karen Eccles says, “We’ve heard all the promises. But in reality, we had more patients on trolleys last month than ever recorded.”

Related: Leo Varadkar is ‘saddened’ the nurses
will strike on a weekday

On Wednesday, January 30, members of the Irish Nurses and Midwives Organisation (INMO) will strike for 24-hours. Should their requests to the government not be met, the nurses will strike a further five days in February. We at IMAGE wholly support them.

‘Our action is to save lives’

“When you go into a hospital, nobody wants to wait,” says mature student nurse Corine Rush. “Everyone wants to be seen as soon as possible, and that’s completely fine. That’s normal.” But, with more graduates opting to emigrate and more experienced nurses entering retirement, understaffing in Irish hospitals has become a critical issue.

Understaffing doesn’t just affect the nurses who are left to pick up the slack, but also the patients who must wait longer to be treated. “The Irish Hospitals Consultants Association attributes 350 deaths to waiting times on trolleys in emergency departments,” Karen says. “It’s not good enough. Trust us now when we say this health service is not good enough for you. Our strike action is to save lives.” 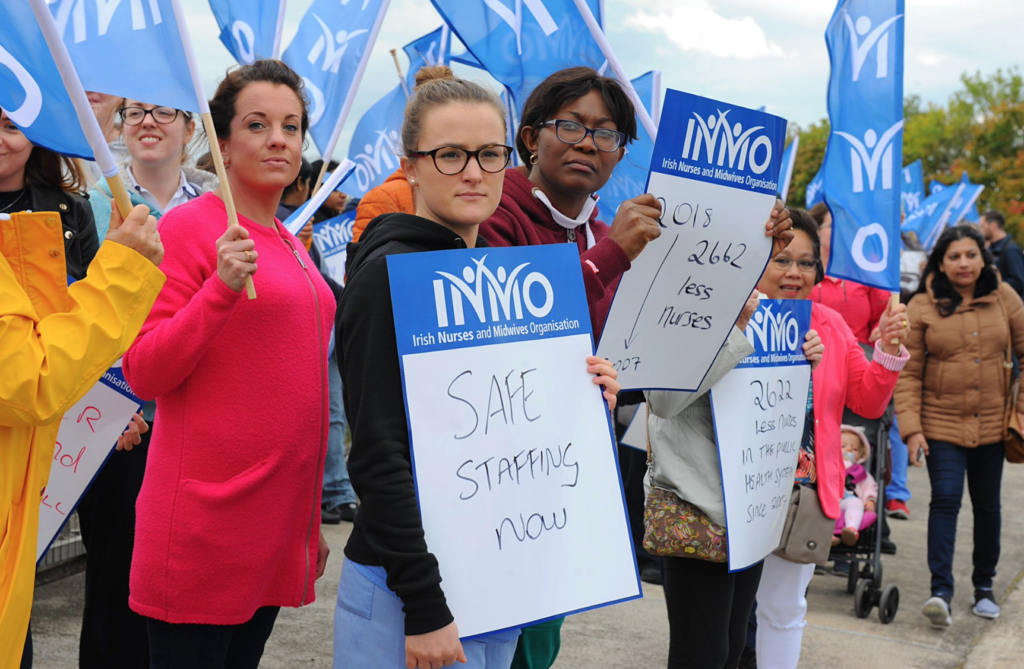 Nurses campaign for safe staffing levels in Blanchardstown. Photo via INMO on Twitter.

Why are nurses leaving?

The working conditions for nurses in Ireland are sub-par. While sufficient nurses are being trained here, better pay and flexible hours are calling them abroad. “More than 70% of the graduates last year have indicated to leave,” Karen says. “Australia beckons and our graduates are making choices to go… and I really wouldn’t blame them.”

“When you’re tired, you may not make decisions as quickly as you normally would…”

What’s more, older nurses are taking early retirement where they can. “There are a lot of [us] who are really burnt out,” she says. “Fatigue is becoming a big thing in hospitals, particularly with on-call staff. When you’re tired, you may not make decisions as quickly as you normally would. That’s the reality.”

“Nurses here aren’t looking for a pay rise; they’re looking for pay restoration, for their money back.”

Corine adds, “It’s counterproductive to say money isn’t the reason for the recruitment and retention issues we’re having; nobody wants to work for peanuts,” she says.

“Nurses here aren’t looking for a pay rise; they’re looking for pay restoration, for their money back. They want the money that was taken from them during the recession. They’re not looking for something they weren’t previously entitled to.” 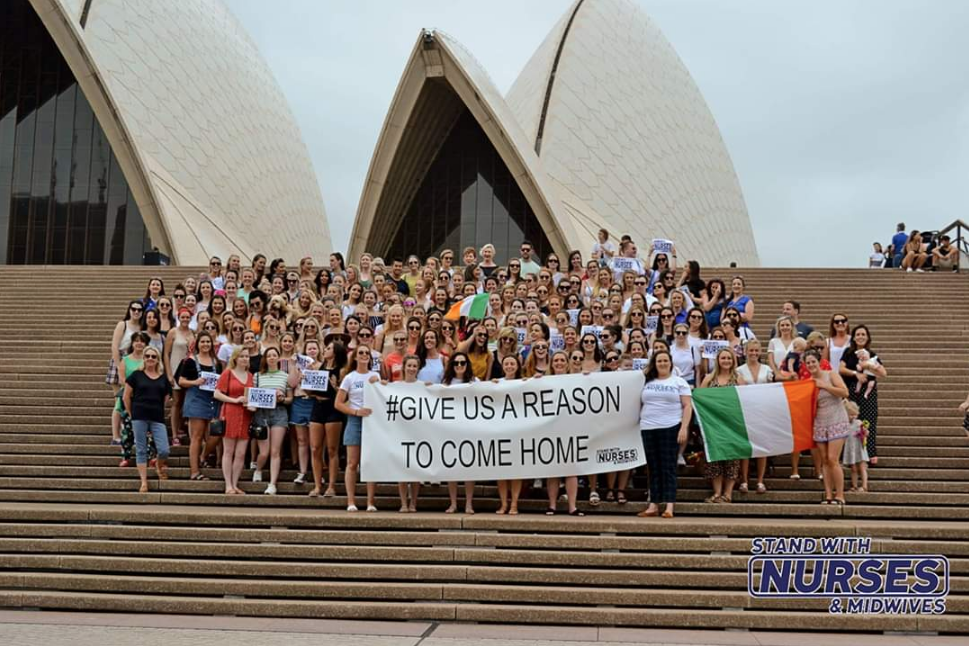 ‘There’s a lot of pressure on us’

The INMO insists a 12% pay increase will bring nurses into line with other healthcare professionals in the country, such as physiotherapists and speech and language therapists. The union is seeking pay equality for its members; arguing a pay increase will encourage nurses to stay in Ireland.

“I just don’t see how it’s fair,” Corinne tells us. “I know physiotherapists and speech and language therapists have a level of autonomy, and that’s not to be disregarded. Nobody’s arguing there’s a lot of pressure on them and they’re amazing at what they do.

“But nurses also have autonomy. There’s a lot of pressure on us too. It really bothers me when someone says, ‘Oh, I deserve that much money because I have autonomy’,” Corinne continues. “Yes you do, and so do I, and so do the nurses who are working ’til their backs are broken so that you get the care you deserve.” 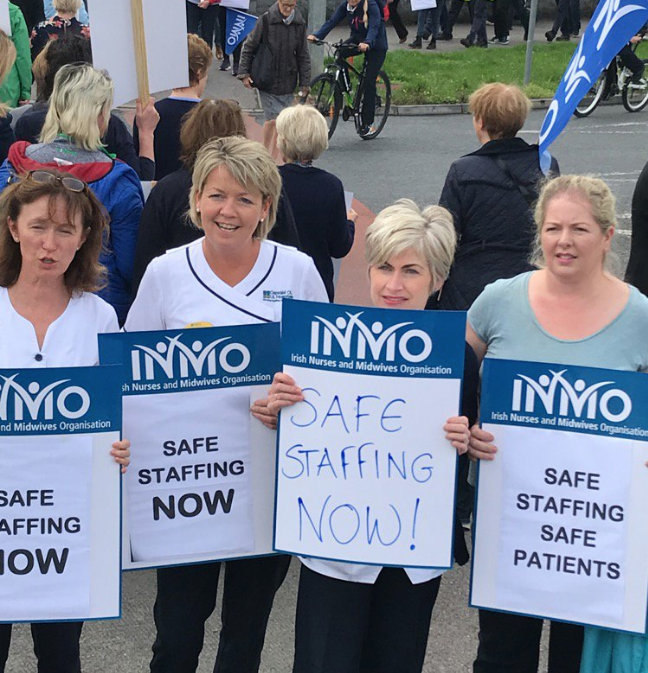 Nurses campaign for safe staffing levels in Limerick. Photo via INMO on Twitter.

If she could speak directly to the Taoiseach, Corinne says she’d say, “To pay someone less for an equally high-pressured job is just not fair. We have equal education, equal responsibility – if not more responsibility.

“Do you not feel nurses are worth your money? That the responsibility level they have is not worth being paid for?”

“We work the longest hours and get paid the least.”

“We’ve highlighted our concerns for years,” she says. “Not just to this government, but consecutive governments.

“If we don’t get nurses back into the country, the conditions are just going to deteriorate.”

What can the public do to help?

While the nurses have decided to strike on January 30, the government remains reluctant to meet their requests. That’s where we, the public, might be able to help.

“Patients must have a voice to say, ‘this wasn’t the best experience, this could be better and we want it to be better’. We don’t mind them saying that. We need that. We need the support of the public,” Karen says.

“You hand over the most precious individuals you have in your lives and trust us to care for them. Trust us now when we say this service isn’t good enough.”

“Trust us. Trust is an implicit part of being a nurse. You hand over the most precious individuals you have in your lives and trust us to care for them. That’s a very personal thing to me.

“Trust us now when we’re saying this service is not good enough for you. Don’t accept it. Trust us and support us.”