Why 1980s style always seems to be in fashion

My most vivid memory of 1980s fashion is of my older sister on her way out to a disco around 1985-ish wearing a shiny cerise shirt down to her knees, tight black jeans and pink winklepickers (bought for her by her then-boyfriend, which made them seem all the more glamorous). Her hair was artfully sprayed into a style that was Robert Smith-esque and her make-up was straight off a Desperately Seeking Susan movie poster. She looked like someone out of Top of the Pops, which was the highest compliment you could pay someone in those days.

She owned a “Choose Life” T-shirt, wore neon ankle socks and had an oversized stonewashed denim jacket that I longed to wear with fingerless gloves. I was only 11 at the time, so my experience of ’80s fashion was limited to leg warmers and scrunchies. By the time Hollywood Nights became my weekly haunt, the ’90s had dawned and the most stylish thing to be seen in was a pair of Levi’s 501s. It took the imagination out of getting dressed up, but as a shy teenager, I was more than happy to rely on this safe, acceptably stylish uniform.

RELATED What 1980s TV taught me about glamour

The ’80s has probably been the most polarising decade in fashion over the past 70 years. It-girl-turned-designer Alexa Chung once dubbed it the worst, but then she was only born in 1983, so she never saw it first-hand in all its unapologetic glamour and excessive fabulousness. Love it or hate it, the 1980s certainly had personality. Perhaps that’s what makes it such a challenging retro trend. It requires a do-or-die attitude. No other era demands such commitment. Like skinny jeans, ’70s flares no longer feel retro. Nineties clothes are now the basics around which we anchor our wardrobes – slip dresses, single-breasted blazers and straight-leg pants – while nodding to the ’60s is as simple as wearing a pilgrim pump.

Having said that, you don’t have to go all Saint Laurent to embrace this season’s take on the 1980s. Escada, the original label of corporate superwomen 30 years ago, played to its strengths and sent longer-length double-breasted jackets down the runway and bold-shouldered jackets (styled with rolled-up sleeves, just as Christine Cagney would have worn them) accessorised with belt bags and chunky gold chains. The collection didn’t ignore the evolution of workwear since the label debuted 40 years ago, however. Vibrant, oversized silk shirts that didn’t overwhelm because of their beautiful fluidity provided an easy-to-wear and perhaps fresher take on Escada’s original ’80s sensibility. 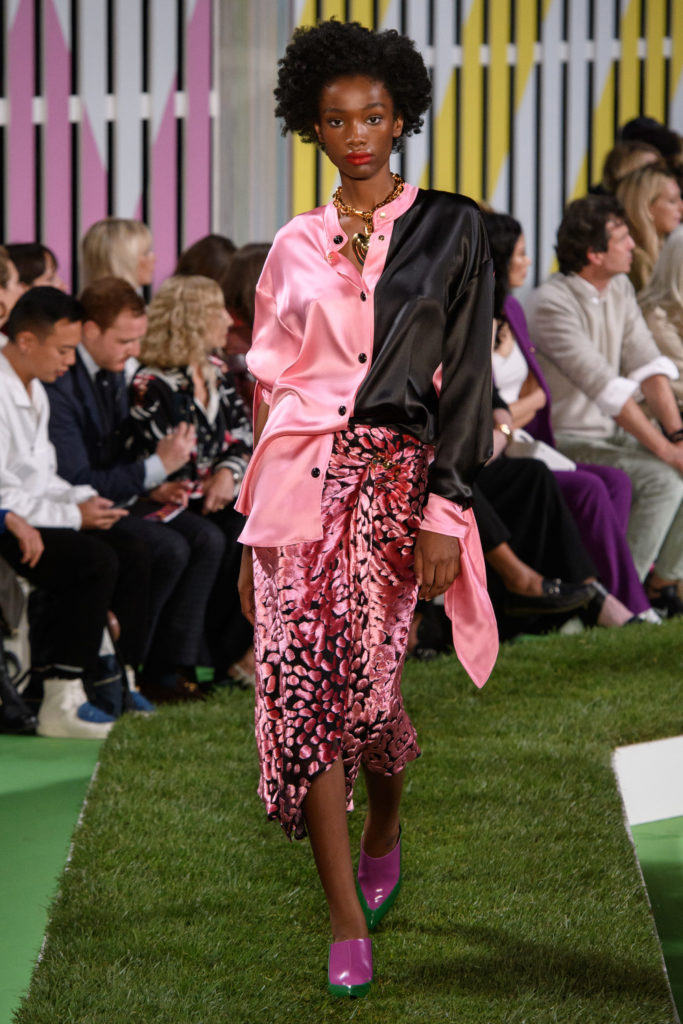 During a preview of his collection, Marc Jacobs stated, “I think there are plenty of people dressing women to go to Starbucks. It’s not of interest to me. If you’re going to get dressed up, get dressed up.” A truly ’80s sentiment if ever I heard one. From frothy Pierrot collars to extravagant bows reminiscent of Princess Diana’s early Royal outfits, this was a collection that paid homage to an era of fearless extravagance, but pick apart the looks and you’ll find more subtle statement pieces perfect for modern women who love nostalgic style; a pair of high-waisted, pleated, wide-leg pants, for instance, or an exquisite cream coat with sash belt and gathered sleeves. This was a show that cleverly embraced the OTT mood of the ’80s without failing to deliver on shoppable essentials. 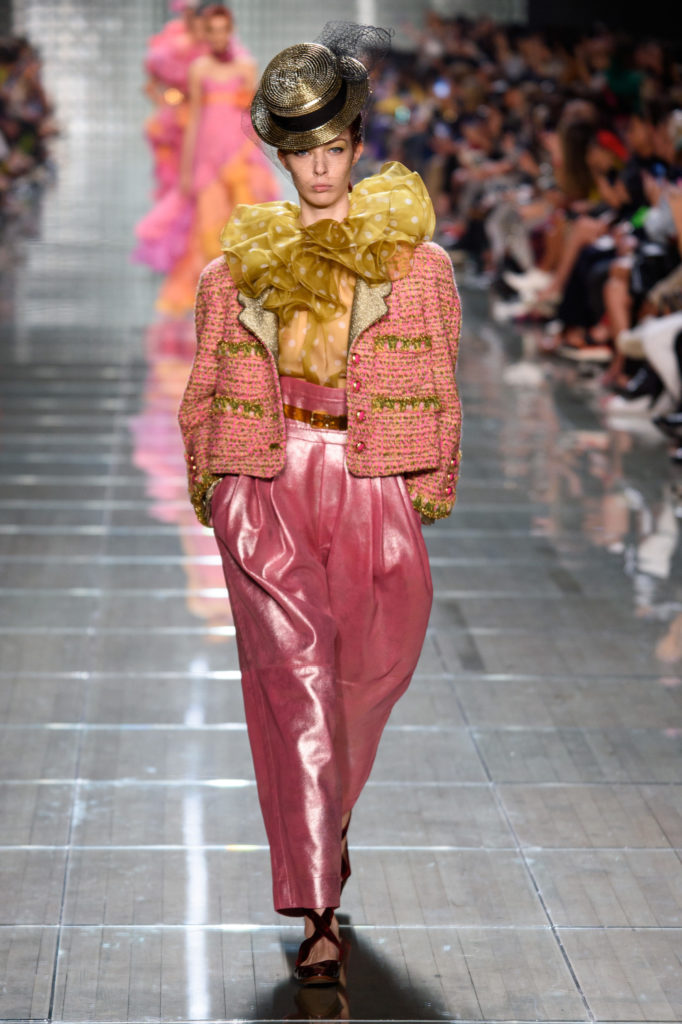 Much has been written about the relationship between ’80s fashion on the catwalks this season and last and the #MeToo movement. For the first time, fashion in the 1980s became a tool with which to even out the playing field between men and women in the workplace. If you dressed like a man, you would in theory be taken as seriously as a man and achieve as much as a man. Clothes gave women strength then, and a voice, and perhaps this is what designers wanted to imbue women with for SS19: confidence and power at a time when many seem to have been stripped of both.

What’s interesting is that besides Saint Laurent, and Celine since it fell into the clutches of Hedi Slimane, the super-sexy side of ’80s fashion has been mostly ignored this season. It may have been spring/summer on the runways, but there was only a modicum of flesh on show. Silhouettes were loose and skirt lengths modest (midi skirts have remained the most dominant length on the catwalks and our high streets since SS13).

Instead of high-octane glamour, designers embraced the highly saturated shades of the era, taking inspiration from the fun side of ’80s fashion as well as the empowering. Highlighter-style neon appeared at Koché in the form of yellow ankle socks (just like my sister’s), chartreuse coloured tights and cummerbund-style belts. Off-White chose this same shade of neon green for a deep-V, gathered-sleeve blouse and square-framed sunglasses with orange-tinted lenses. Balenciaga, the brand that first pioneered American football-style shoulders and boxy longer-length blazers, sent a stunning oversized fuchsia two-piece down the catwalk complete with white clutch bag. White bags and shoes continue to be the trend-aware woman’s accessories of choice – they have a way of bringing freshness and a contemporary cool to reliable basics. 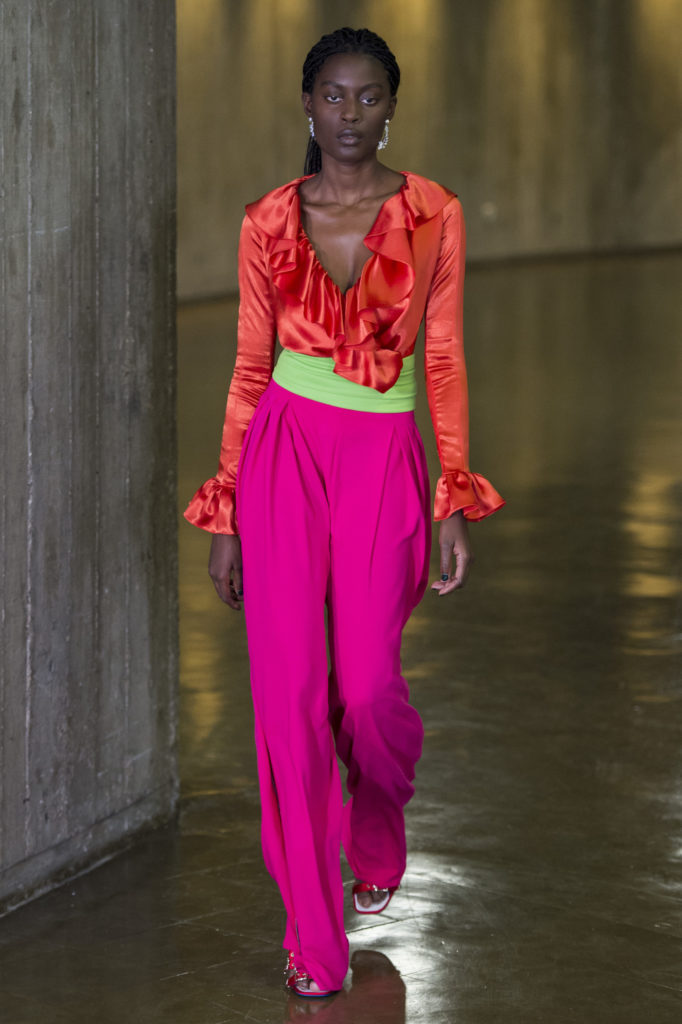 The energy and vitality of ’80s beach culture was also channelled at Etro, Chloé and Fendi among others. Tropical shades, paisley prints, bandeau tops and floaty kaftans had a “Club Tropicana” Technicolor glamour to them. The mood was optimistic, and maybe that’s at the heart of why women in 2019 want ’80s-inspired fashion – the sense of optimism, energy and fun it brings. What could be more empowering than that?