Have You Contributed To This Trillion-Dollar Trend?

Here’s why your fake Chanel just got you way more street credibility.

Today, it’s hard to differentiate the real from the fake. One quick Google search – and 0.5 seconds later – I have more than 9 million options to buy bootlegged goods?from all over the globe, all with ease from my phone. For the most part, it’s hard to tell a fake from a real unless it’s an obvious fake or you take the time to check the inside lining (fashion lovers will understand the significance of this).

The last 18 months has seen quite a shift for the fashion industry: we witnessed a dramatic change in rhetoric from many designers towards political and global retaliation (Maria Grazia?Chiuri’s femme-fetal indulgence at Dior,?Prabal Gurung’s ‘the future is female’, Balenciaga’s Bernie Sanders inspired collection, Hilary Clinton’s collaboration with top designers to boost her campaign efforts). And now – as though all rules have been executed – designers are even creating ‘bootlegged”versions of their own product (inception x10).

Counterfeit culture is rampant and showing little signs of stopping (unless, of course, you’re met with a million dollar lawsuit like Forever21). The dirty attitude that once stood against fake goods has lifted and both consumers and fashion houses are getting on board the counterfeit train.

One online fashion journal says that it was streetwear label?Vetements?under the direction of?Demna Gvasalia?in 2016 – who relaunched the fake fashion culture back into the cosmos.?As part of a sample sale, Vetements?recreated the brand’s’most popular pieces but slightly altered to give them an authentic ‘fake’ look – ironically.?For me though, it was?Alessandro Michele’s Gucci empire – ever heightened by their strong foothold on social media – who have laughed the loudest in the counterfeit?war thus far, with their falsified take of the original Gucci logo as ‘Guccy’. 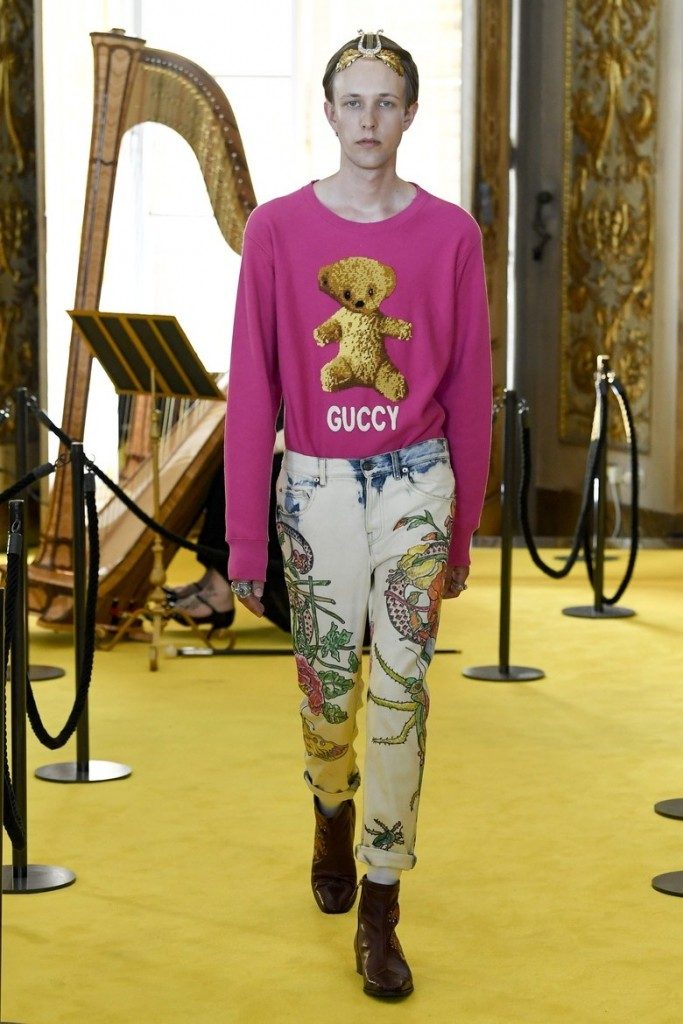 Gucci’s own “Guccy” debuted at the Gucci Resort 2018 show

Social media has excelled the counterfeit culture far beyond boiling point and is showing no signs of slowing down. It has enticed creatives around the world to push the boundaries of safe, trend-focused fashion with the simple addition of a floral motif or a small symbol (think of it as creative stealing. Besides, when is anything original in the fashion industry?). And I welcome it! It promotes competition within the creative industry and adds a new horizon of originality and spontaneity. It’s fresh and entertaining to watch.

What drives us to do it? Money – for the most part (unless you’re?this kid?who has a larger collection of luxury goods than we ever will in this lifetime). I can – like 99% of the human race – agree that paying in excess of €15,000 for a sacred?Herm’s Birkin bag?results in icky levels of extravagance – even if it is deemed a?better investment?than the stocks or even property.

Undoubtedly, this culture raises questions about the quality and relevance of brand identity among today’s generations, as well as fair trade and design longevity. Some believe the trend is just that – a trend. However, others say the fake fashion culture is having a positive effect on the economy and could be worth a dizzying?$2.3 trillion by 2022, according to The Business Of Fashion, with China and South Korea being among the biggest producers of counterfeit goods.

Irish revenue collected over €25,000?worth of counterfeit goods in just one day in Dublin this month.

Without a doubt, street culture is a booming force that’s reluctant to slow its gears. ?It’s unclear what might morph from this contemporary culture, but if it’s deemed acceptable to pay €15 for a plain?logoed t-shirt instead of €350, that’s fine with me. The adage “fake it ’til you make it” has never been’more apt.