The death of a sibling can result in a very complicated type of grief that is rarely acknowledged. Amanda Cassidy speaks to Katie-Anne O'Toole and her sisters about the tragic deaths of three of their siblings and how they are slowly learning to find light after loss...

“How is it even possible that part of our very own flesh and blood no longer pumps around our beloved sister and brothers? Three bodies. All gone. Buried beneath the pretty flowers that can never mask the ache that we feel.” Aishleen, Katie-Anne and Charlotte O’Toole know how it feels to lose a brother and a sister, and then yet another brother.

The three sisters, from a small village in Roscommon in the West of Ireland, also know how it feels to arrange three funerals, to pick the coffins and to choose the music that means the world to them and hope that it does justice to their siblings that have passed away far too soon. In May of 1996, their brother, 7-year-old Declan, passed away with a malignant brain tumour just six months after his diagnosis.

The family, parents Helen and Frank and children Aishleen, Fintan, Jacinta, Katie-Anne, Charlotte and Sheridan all ranged between the ages of 13 – 3 years of age. They were left devastated, confused and completely unbalanced.

“I remember watching our mother load the dishwasher slowly and achingly, with silent tears running down her face. Our father had to go out to work every day because although his heart was broken, the world went on. There was not a lot we, as siblings, could do except to watch our parent’s agony of losing their cheeky little boy, knowing there was nothing we could do to help fix things.

Even though we grew up in the same household, we all experienced the loss of our brother very differently. We tried to support each other but we didn’t know how. We just watched one another struggling with this new reality that nobody else outside of the family really understood. It was really, really heartbreaking.”

Experiencing bereavement as a child is confusing and often very isolating. Youth Psychologist, Alison Phelan says the loss of a family member can make children feel much less safe.

“You fear someone else will die too and wonder where they are gone. It is a loss of control and watching a parent go through the grieving process has a profound effect on a child. Often they feel guilty that they are the one who survived.” Katie-Anne said they all struggled to come to terms with the loss of their adorable little brother.

“As a child you are lonely. You are told you are resilient and you will move on. Move on from what? How can a child move on from something they do not understand, only fear.

We were stuck. This created a blockage in our minds and souls. Living with bereavement is like living with your hands up in front of your face, eyes wide, mouth straight and chin gripped. Constantly braced for impact. If it has happened once, who is to say it will not happen again? We lived with the absolute terror that a sibling could die. And, devastatingly, we were right.”

Katie-Anne’s sister, Jacinta died in January of 2016 at just 30 years of age from a brain aneurysm. Then, her brother Fintan died in April 2017 from what she describes as ‘absolute heartbreak’.

“Fintan grieved for his younger brother Declan since he was 13 years old. His mourning was long, lonely and etched on his skin, held in his broken and unkempt body. His sorrows were hidden in his long hair and bushy beard that he chose to keep to give him some sort of depth in his lamented body.

From the day Declan died, Fintan mourned the loss of his wrestling buddy and his cereal companion. Fintan felt he could never save his little brother and as a result, chose to live a life not worth saving. He became isolated and self-destructive. Fintan had just begun to come out of this spiral when he passed away from sadness.” 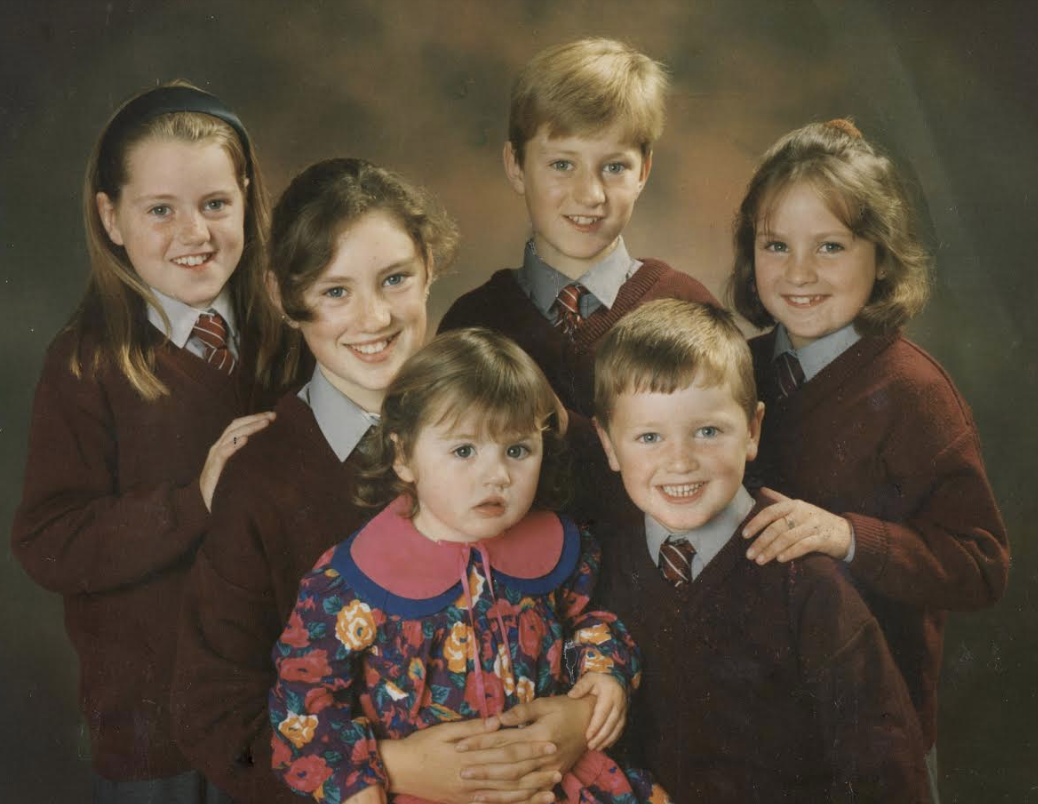 The relationship between brothers and sisters is special. We share our entire history – our lives entwined from birth. The joy of having siblings is being with that person and not having to explain a feeling. It’s a look, a smirk or an elbow dig. It’s squashing into the back of the car and not wanting to be the one that sits on the seatbelt.

Joy is sitting watching The Simpsons together at 6pm, walking home from school talking and shouting, “I’m telling on you!” It is having someone to share your room with, to laugh with (and at!) and someone to put your arm around you when you need it most. Losing that, especially at an early age, has a profound impact.

Now, the sisters have decided to channel their grief into support for others who are coming to terms with such loss. They set up Jacinta’s Smile – a foundation that aims to foster a sense of belonging and a safe place to be cherished while you grieve.

“We believe that there is comfort in great sadness. There is light in loss, and there is peace in despair. We have experienced the rushes of love, kindness and warmth rushing through us from all of the candles lit in our honour.

From people not knowing what else to do. We understand the physical pains, the anguish in the broken heart, the breathlessness in the panics, the tensed eyes, the anxious mind that wanders from being relatively ok to expecting it to happen all over again. We understand the body that is sore from shaking from the shock of reality that hits when you hear their name and another face turns that isn’t theirs.

We would like to achieve a sense of inclusion in something that can feel so isolating. We hope to offer a sense of being with another whilst saying nothing, there is no need to give an explanation. We want to allow those we come into contact with to have a place where they can lighten the tightrope around their heart. We will stand with them and hold their sorrows as they hold ours.

To anyone that has experienced the loss of a sibling, we are sorry. We understand that you now carry empty spaces with you that you feel cannot ever be filled. After the tragedy of going through this myself three times, I want you to know that there will come a day when the pain starts to unfold and fall away ever so slowly.

I’d like you to know that those empty spaces that you carry will slowly allow joy to seep in once more – those little tiny lifts of the heart will eventually start filling that gaping hole, one crack at a time.”

You can find more information on Jacinta’s Smile and support for bereavement here.

This article was originally published in June 2022.

Grieving at Christmas: ‘Lung cancer may have taken Martin but the memories of our Christmases past will remain intact’

Surrogacy in Ireland: ‘Having our baby took four failed transfers, four surrogates and three egg retrievals. He was born in Ukraine’