In this all or nothing world, we are in danger of cancelling vital conversations in favour of zapping those we don’t agree with into the abyss, writes Amanda Cassidy

‘Go kill yourself’, the tweet read, its vitriol undulled by the bright screen in front of me. Aimed at Irish TV presenter Laura Whitmore, the starkly audacious online comment was as a result of her appearing on a podcast to show support for the British Army during lockdown.

The 35-year-0ld had been promoting a podcast series for the British Army called The Locker in which the Love Island presenter interviews a female soldier about her life in a typically male-dominated landscape.

“Hear me talk about all things confidence, body positivity, being female in a male-dominated industry & overcoming insecurities with the inspiring Ella, a soldier in the @britisharmy,” she shared. 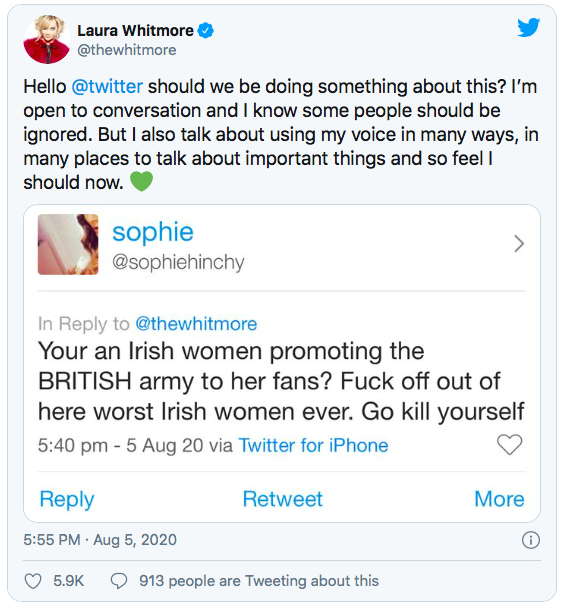 Later, Whitmore who hails from Bray, posted a tribute to the late John Hume, the man who worked tirelessly and successfully to promote peace in the North during the troubles.

Immediately she was attacked for being “two-faced” and a “traitor”.

“This is not about ignoring the history book. This is about progress and equality — something Hume promoted,” she wrote on Twitter, in response to the flurry of outrage.

But once the online mob decides not to accept whatever controversy is currently unfurling, there are immediate calls for the person in question to get canceled. And the language that is being used is unacceptable, intolerant and misguided.

Incidentally, this all happened on the same day that the inquest into the death of former Love Island presenter Caroline Flack was being held — another person who faced a torrent of abuse online after a domestic altercation with her boyfriend became a public soap-opera.

So where should we now draw the line between the truly deplorable actions of some and the victims of an insatiable internet mob? And why is the court of public opinion holding such sway?

A lack of due process doesn’t transform into a moral good just because you sometimes agree with those it sets in its sights.

And there is more to cancel culture once you fall down its sinister rabbit hole. Welcome to the world where splashy gestures and noisy dramatic posts are poor substitutes for genuine social reform. The Great Awokening risks encouraging empty signals in the guise of actual progress. It is the balm of piety without having actually done anything much (except maybe tweaking your Insta selfie to a sultry black and white). Slackivism at its finest.

The fall of people like Harvey Weinstein is one example of how this collective tisk-tisking can work in a more positive way. His subsequent conviction was because people felt safer together to reveal en masse via the internet how they’d also been hurt by him.

But this mechanism worked only after the judicial system had failed those victims. The danger in using this method as a way of taking all people to task, is that it is morally ambiguous, with economic agendas and various power plays also at work behind the scenes.

We now live in a world where something as weak as liking the wrong tweet can strip you of your career. People are being fired for missteps that might have happened decades ago or aligning themselves with those who fall out of favour depending on the online temperature of the day.

But there is no consistency. Have we already forgotten that Obama opposed same-sex marriage in 2008?

Being outraged is easy, but to direct it at the right person for the right reasons makes things a little more complicated.

Fear of saying what you want to say is now being replaced by carefully managed messaging that offends nobody… just in case. And the result is a dilution of actual helpful discourse, of conflict resolution, opposing views, and healthy arguement… maybe even education, respectful debate and genuine awakening. There’s now no room for learning or understanding, just a collective inability to probe further. It is the ultimate example of click and go.

The impetuous mob risks being blinded by their own self-righteousness. Being outraged is easy, but to direct it at the right person for the right reasons makes things a little more complicated. It is never as simple as right or wrong, and certainly not in 280 characters.

We all want to fight against what is wrong and set the right things right. And calling people out when they are wrong is often a brave and vital part of living in society.

But cancel culture is beginning to reek of settling old scores — of that rabid rush of power to the head becoming more of a motivator than any single cause alone. And when that starts descending into death threats against a celebrity then we know things have been taken a step too far.

Remember, hurt feelings don’t make you right. And as Laura Whitmore said herself, “you don’t have to tear down someone just to feel good about yourself”.