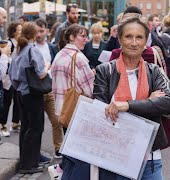 There's more than one way to make pizza in the garden, be it on a DIY wood-fired oven, on a regular barbecue or in a specialist outdoor pizza oven. Three chefs share their techniques.

We’ve all been lured by the curious delights of the middle aisle of certain supermarkets. Each time I scan the ads for incoming random items and spy an outdoor pizza oven, I’m reminded of the wok scene in Intermission; would I get the use out of it?

Of course, there’s more than one way to do anything, so we caught up with three chefs for their advice on making pizza outdoors.

In a DIY wood-fired oven 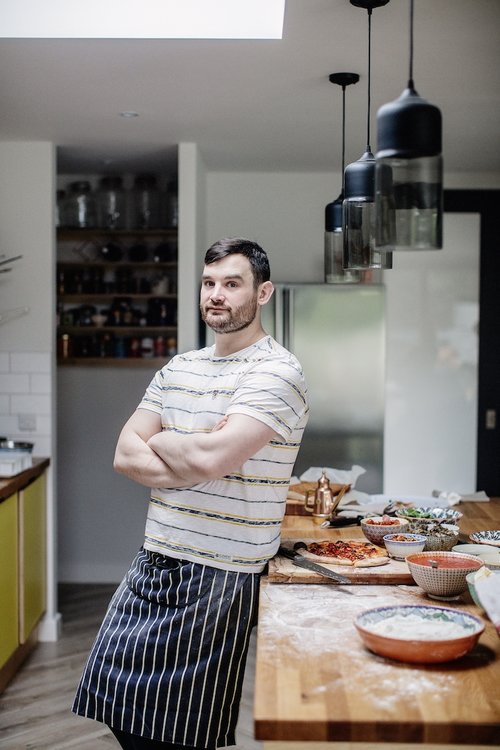 Reggie White knows good pizza, as anyone who has eaten his charred, puffy crust creations will agree. Reggie formerly worked his magic in Pi on South Great George’s Street in Dublin, leading the restaurant to be featured on and topping ‘best pizza’ lists in Ireland and Europe, and now a pizza place of his own is in the works.

We wangled our way into his home kitchen last year to photograph him preparing dough and it really was mesmerising to watch. Afterwards, he generously shared his dough recipe with us, and mentioned ambitions to create a garden pizza oven, which he has realised, albeit in a garden on the other side of the world.

“So far, I have built three ovens. Two in my parents’ garden in Abbeyleix and one in New Zealand here during lockdown. In short, it’s all about retaining heat and a good flow of air to create a good convection in the oven.”

While the images on his Instagram give a fair idea of the set up, Reggie is keen to point out that it isn’t ideal. “The oven I built here in New Zealand was built from what we had available in the shed during lockdown. The rationale with the cladding, wood and sand was to find a way to insulate the oven. Sand retains heat and the cladding and timber were simply to contain the sand. The metal part was like an oil drum but it’s for coconut cream delivered to a local factory.”

In Ireland, he has built home ovens with fire bricks from Dineen Refractories, a family-owned company in Laois, and he stresses the floor of the oven must be made of thick, heat-retaining material, like fire bricks, and that these can used for the dome too. 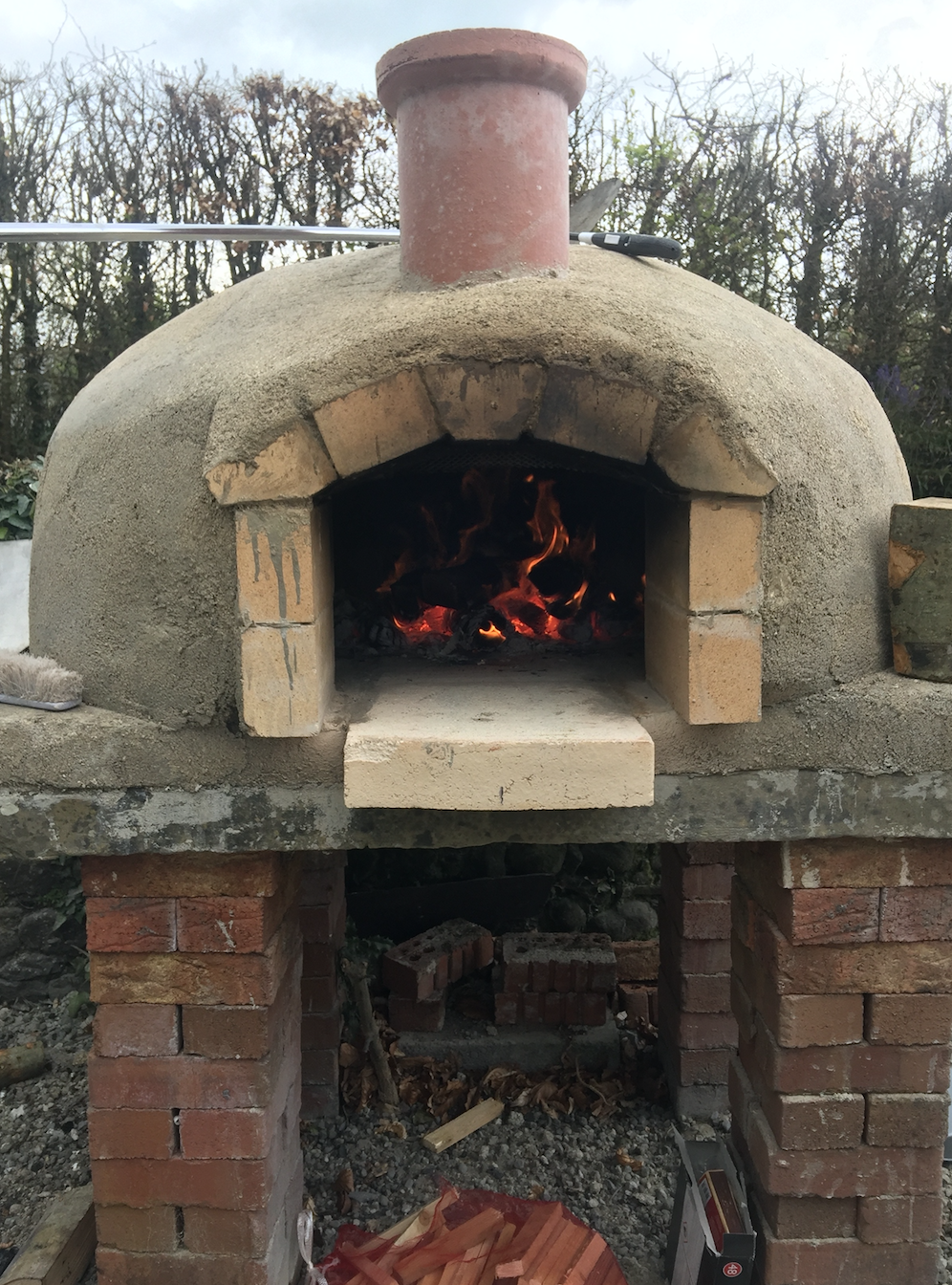 “The pitch of the dome mustn’t be too high as you want the flames to run along the ceiling over the top of the pizza. If the pitch is too high, the effectiveness of the flames is greatly reduced.” For insulation, he has used fibreglass and vermiculite, as the latter won’t crack like concrete does under high heat. 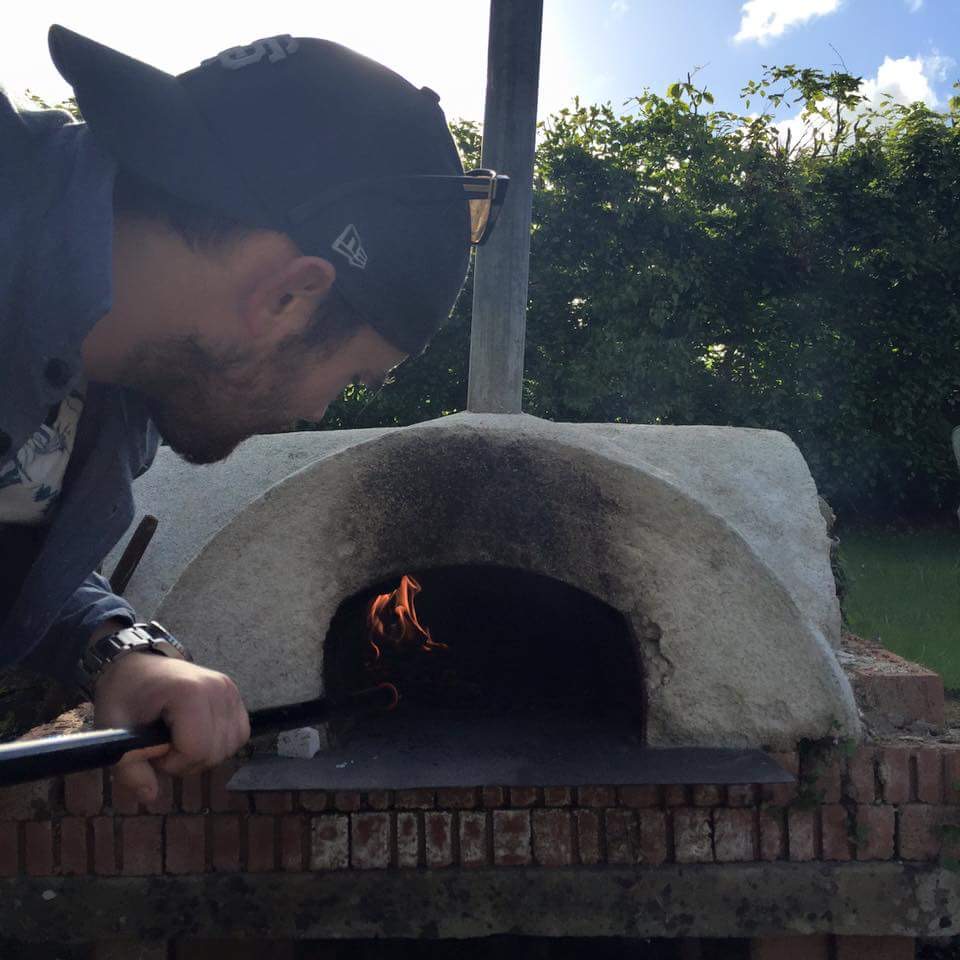 The door itself should only be big enough to get a pizza and logs in and out safely. “If the door is too small, not enough air will get into the oven and the fire needs plenty of oxygen to burn at the high temperatures needed.”

Finally, the flue or chimney for the oven is important for generating ‘draw’, he says. “The taller the flue, the greater the draw. The flue should be positioned at the front of the dome by the door. A tall flue helps the oven burn hotter and cleaner.”

If that all sounds like a little too much DIY for you, Reggie highlights that both Wood Fire Ireland and Dineen Refractories sell DIY kits for building a pizza oven. “The most important part of this is the experiences you will share with friends and family in the garden, it’s not about perfection. I’ve shared some amazing days with friends and family slinging pizzas in my mum’s garden.” 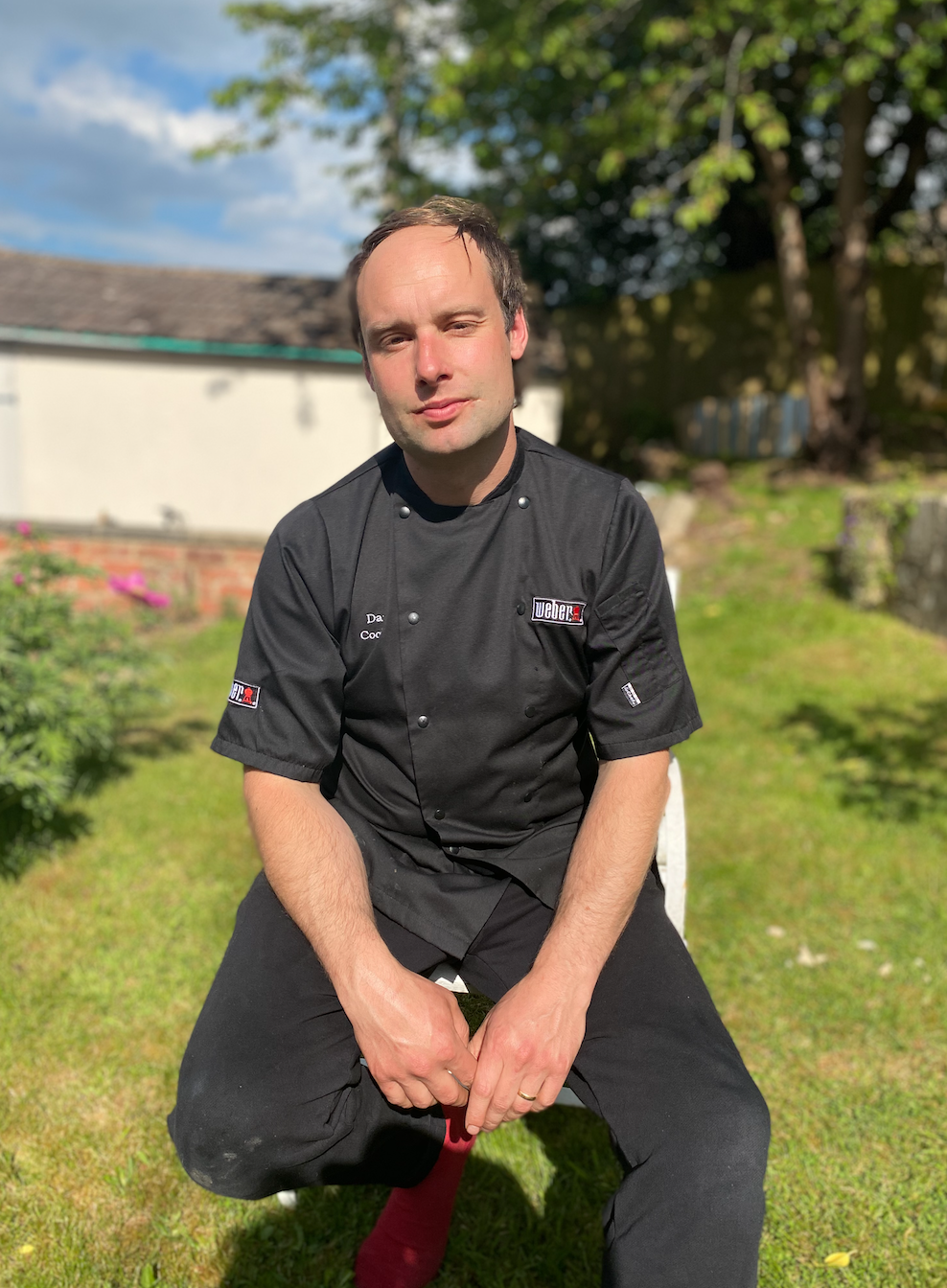 A high heat, homemade dough and good quality toppings are the foundation of a great pizza, says Dan Cooper, Weber’s Grill Master. The barbecue is a bonus. “You can get your barbecue far hotter than a standard domestic oven,” he explains. “The best pizzas are cooked upwards of 260 degrees / 500F.”

Speed is the other benefit. “If the barbecue is set up correctly and running at a good high heat it could take anything from 2-5 minutes. But preheat your stone in advance for at least 15 minutes and have it at 260 degrees before placing it on.” 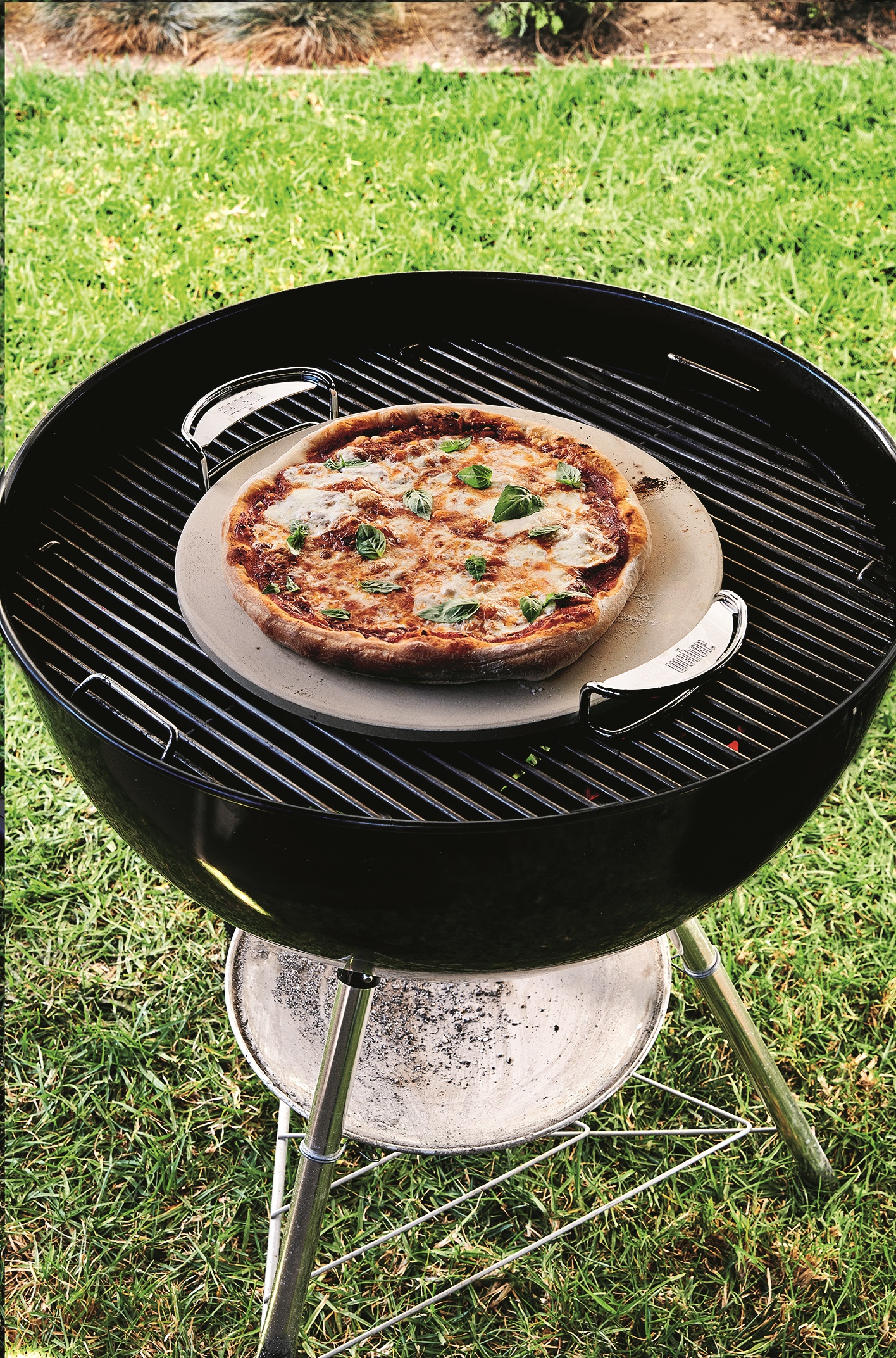 Dan says there is “no real difference” between cooking a pizza on gas versus charcoal. “Charcoal can have a slower recovery time so be careful not to lift the lid often. I would also allow slightly more preheat time before adding the pizza when using charcoal.”

Tools-wise, ideally you need a pizza stone to distribute heat and fill each pizza with light doughy air pockets, a golden crust and a toasty base. And while chefs are often private about their tinned tomato choices, Dan happily shares he rates canned San Marzano, but that “any good premium brand will do”.

To make a sauce, Dan mixes chopped tomatoes with a “a good dusting of oregano, a dash of extra virgin olive oil, sea salt and black pepper and a couple teaspoons of light brown sugar”, and to bake with grated mozzarella and add a good quality buffalo mozzarella after the pizza has been cooked.

In the dedicated oven

If you’ve been on social media during lockdown, chances are you’ve been served an ad for an Ooni oven, or a pal has shared a post to try win one. Gaz Smith of Michael’s and Little Mike’s has a gas one and rates it as it “heats up so easily, remains an even temperature, and it’s cleaned with a quick wipe to go back into its box”. Although it does require practice, as his first experience below shows.

Sometimes it just don’t turn out as you want, never going that wet again ?
Loads of mess & stress for mediocrity

Unsurprisingly, i *don’t* know better than the ooni site???? pic.twitter.com/4tgIk8UaQk

Quick cooking times is another appeal. “I’ve did one in 68 seconds, but usually it’s around 2 minutes.” For tools, Gaz says you need a peel, and preferably two. “One totally clean to put in the raw pizza – warm and dirty peels will make the pizza stick as you slide it in, and your hard work is undone, and one to rotate and remove the cooked pizza. A digital laser thermometer is nice to have. They cost a tenner and show your heat zones, as the front and back varies by around 100 degrees, it is so useful to see it for yourself.”

Gaz reckons Mutti pizza sauce is “faultless”, and if you have green fingers, homegrown basil is best. “If you’re like me who only has to look at a plant to kill it, then buy it. The planted pot bunches in the shops are good, but I usually murder them within a day.”

He advises to look for a “not chewy” mozzarella. “I crack mine open an hour before so it’s not too wet. Pay an extra euro for a good D.O.P. buffalo mozzarella, cheap plastic ones clog you up as they cool and harden. Fior di latte or burrata is amazing too.”

For toppings, if Gaz is going to a place where he knows it’s ace, it’s simple margherita. “Let the pizza chef do their thing. If I’m in the mood for trashy pizza, about eight things – and yes, pineapple too, it’s a great addition and I’m proud of it.” On the side? “Crunchy green salad and a cold beer, and if I’m brutally honest, a side of chips.”

The best salads, sides and dips to level up your next barbecue