Music can affect everything from mood to ambience to how your Christmas dinner tastes... so choose your festive playlist wisely.

Christmas day can be stressful for many reasons. As a child, it’s the worrisome pit in your stomach that convinces you Santa has forgotten you. As an adult, it’s the looming dread of hosting duties.

Hindsight is always 20/20 as they say though and looking back, we realise that Saint Nick always found his way down the chimney and cooking for many is only slightly more work than cooking for one. (That last one may not be true, but no point making you panic at this point, now is there?!)

Being on your best behaviour year-round is the only real way to ensure you’re on the nice list, but there are plenty of ways to take the pressure off when in charge of dinner and having a good festive playlist to keep you going is one of them. Sticking on the usual Christmas carols may seem like a great idea, but – much as we love her – most of us are sick to the teeth of hearing Mariah belt it out.

As always, Spotify has done the hard graft and compiled the information for us. Pulling data together from a variety of different playlists, Lakeland – experts in cooking, baking, cleaning and laundry since 1964 – analysed over 2,000 playlists on Spotify, containing almost 250,000 different tracks, to reveal the most popular songs (and artists) being listened to in kitchens around the world.

So, what comes out on top? Well, according to them, “A Sunday Kind of Love” by Etta James is the public’s favourite dance-around-kitchen tune, featuring in 168 different kitchen playlists. Elton John’s “Don’t Go Breaking My Heart” takes second (with 122 appearances), while Grover Washingon Jr and Bill Withers’ “Just the Two of Us” ranked third (showing up 119 times). 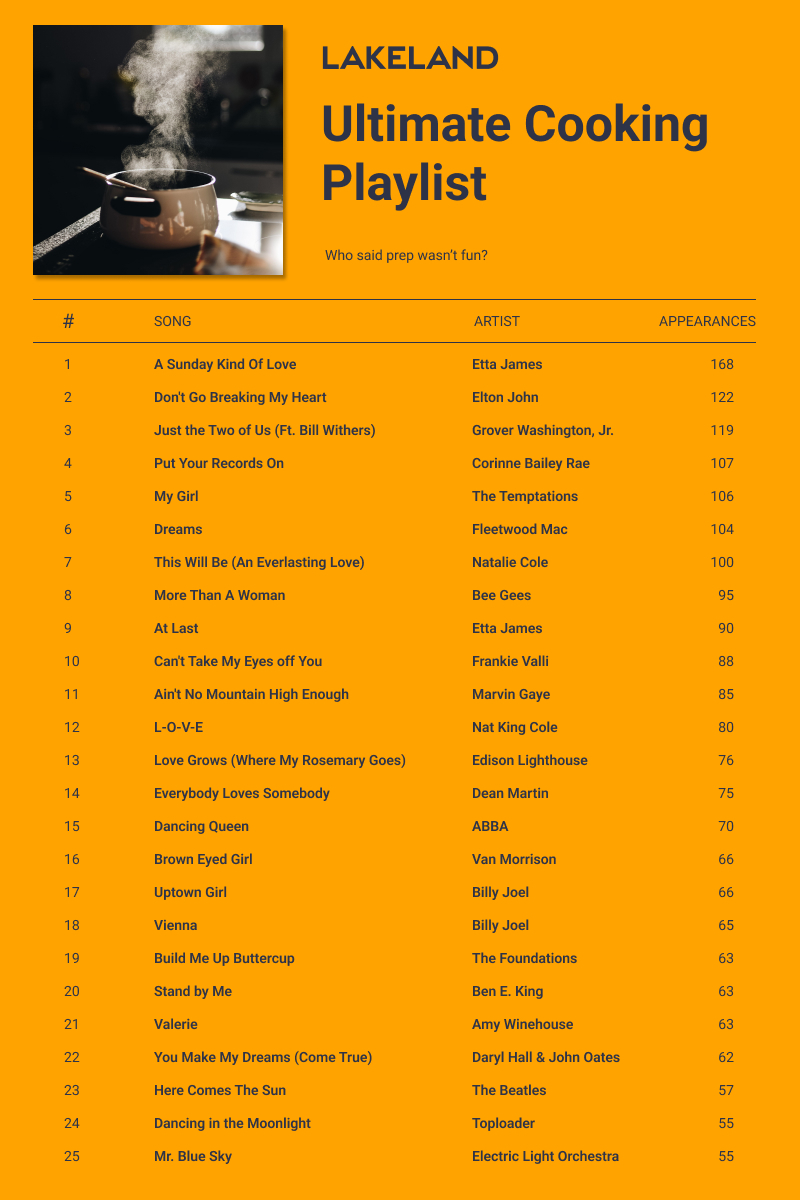 As for the best genres? According to their research, jazz, pop and R&B are the most frequently listened to and themost popular decade was the 1960s. Lakeland’s data also revealed the most popular artists to listen to while cooking, with Elton John, Frank Sinatra and Stevie Wonder sharing the top spot, each having five different songs in the top 100 most popular tracks. ABBA and Harry Styles followed close behind, both with four tracks in the top 100.

The importance of music goes beyond just boosting your mid-cooking slump though and it can actually have an effect on how your food tastes too. Scientist Charles Spence argues that “sound is the forgotten flavour sense”. In one of his studies, crispier bacon was rated tastier by participants and in another, crunchy crisps were seen as fresher. Spence’s studies also found that you can change someone’s perception of food by playing certain music for them. High music can bring out sweet tastes and low music can bring out sour tastes.

Even TV cook and food writer Nigella Lawson (of me-crow-wa-vay fame) has similar thoughts on the matter. She once complained that music in some restaurants is too loud and “drowns out the taste of food”. Turns out she was onto something though and experts have noted that if music is too loud, it can become a dominant influence over taste.

In other words, better pay close attention to your Christmas cooking playlist this year.

Stuck for leftover ideas? This recipe will use up the rest of your Christmas ham

How to cook the perfect steak at home, according to a chef