I'm not sure I'll ever buy pasta again now that I know how easy it is to make at home. It only requires two ingredients (flour and eggs), both of which you probably already have too.

Sunday lunch in our house never consisted of the traditional Sunday roast. My mother is from Argentina and her parents are from Italy so Sunday for them involved pasta, a tradition which was carried down to our family. Mum recalls watching her grandmother spending hours at the kitchen table painstakingly rolling and cutting pasta before it was cooked, tossed in sauce, and served in a bowl on the table for everyone to help themselves.

Sunday lunches with my mother would also consist of pasta – but shop-bought rather than homemade pasta. The pasta would be served in a simple sauce, followed by a meat dish; rarely would we have them both together. My mother’s memories of her mother’s hard work drove her to the conclusion that the process of making pasta at home was “too much work,” and took far too long.

Unusually, one of my close friends loves making pasta; we lived together for years, and for her, making pasta was as quick as waiting for the shop-bought version to cook. Granted, she was working as a chef at the time, so this was a daily chore for her. She claims you can’t beat pasta and wine night with the girls, and she’s right; we often spent hours in the kitchen with a bottle of red, I propped myself at the island while she rolled out the dough.

With two such opposite opinions, I decided to form my own decision on the matter. Taking the pasta maker from my mother and expert tips from my friend, I set aside a Sunday to make my own pasta at home.

You could research endless amounts of pasta recipes but at the end of the day, all you need is flour, eggs, a pasta machine, and a rolling pin … or in my case a roll of cling film because turns out I don’t own a rolling pin. I decided to follow a recipe from Tim Siadatan’s Trullo: The Cookbook; he keeps the process simple, straightforward, and easy to follow. 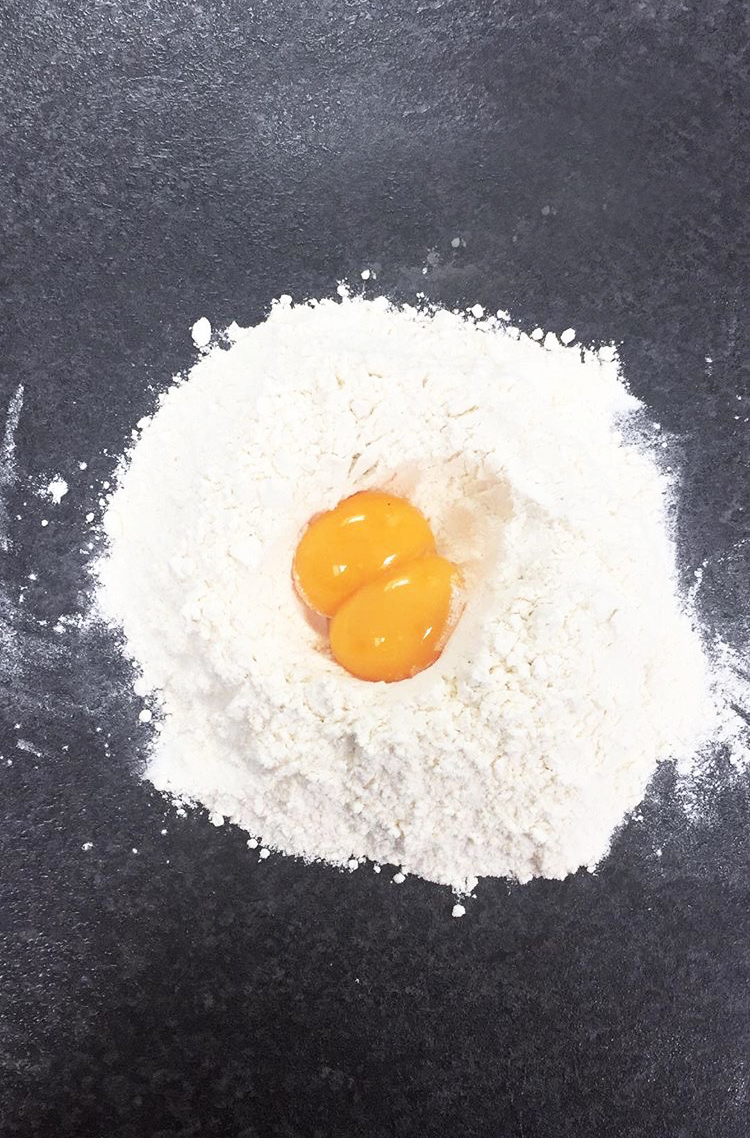 A serving for four people requires 200g 00 flour – a special type of flour that can be found in any good supermarket – and 10 egg yolks. The process is suspiciously easy.

1 Create a well in the flour, add the egg yolks, and use a fork to bind the flour and eggs together. Once the flour and eggs are well combined, knead the dough with your hands until the dough has an almost shiny appearance to it. Then roll the dough out to 1-2cm in thickness, cover in cling film, and pop in the fridge for at least 30 minutes to chill.

That’s the first step over. Almost too good to be true? I managed to fit in an episode of Great British Menu after cleaning down the counter before I had to do anything else. This is what Sundays are all about.

2 Once the dough has been chilled, take it out of the fridge and leave it to come back up to room temperature. It’s these little details that are important to remember. Rolling the dough while it is too cold can cause it to crumble, and then you’re back to square one. 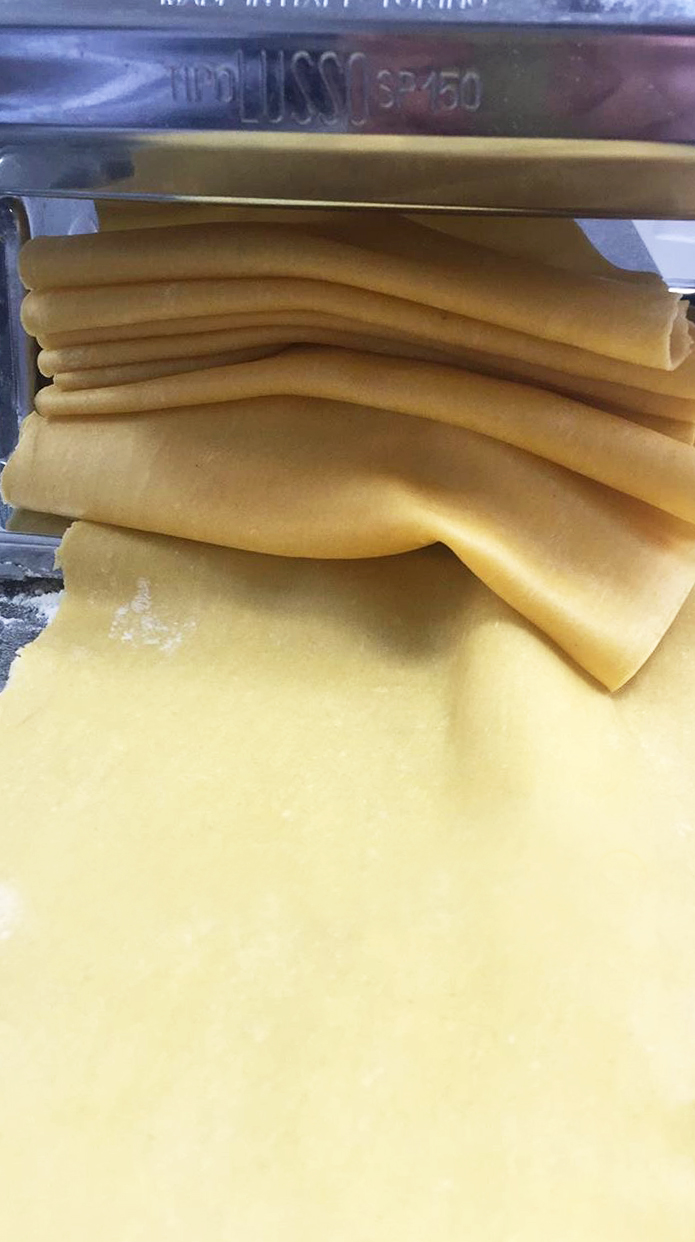 This is when you get your pasta machine set up and ready to roll because once the dough is back at room temperature is when the fun begins.

3 Set your pasta machine to its lowest setting (or the thickest) to roll your dough and work your way up through each setting, passing the dough through a couple of times on each one.

Tip: On the advice of my friend, I passed the dough through on the lowest setting a few times to make sure it was perfectly smooth and had a lovely sheen to it before starting the actual rolling process.

4 From here, the dough will multiply in size and you can stop once you’ve reached your desired pasta thickness – Trullo has a page dedicated to various pasta shapes in its book which is really helpful.

Most machines include an attachment to cut your spaghetti or tagliatelle shapes. I managed to leave that part in my parent’s house so the cutting was down to hand. I folded the pasta sheets and used a knife to make a medley of tagliatelle and pappardelle-shaped pasta and all that was left to do was cook and serve. 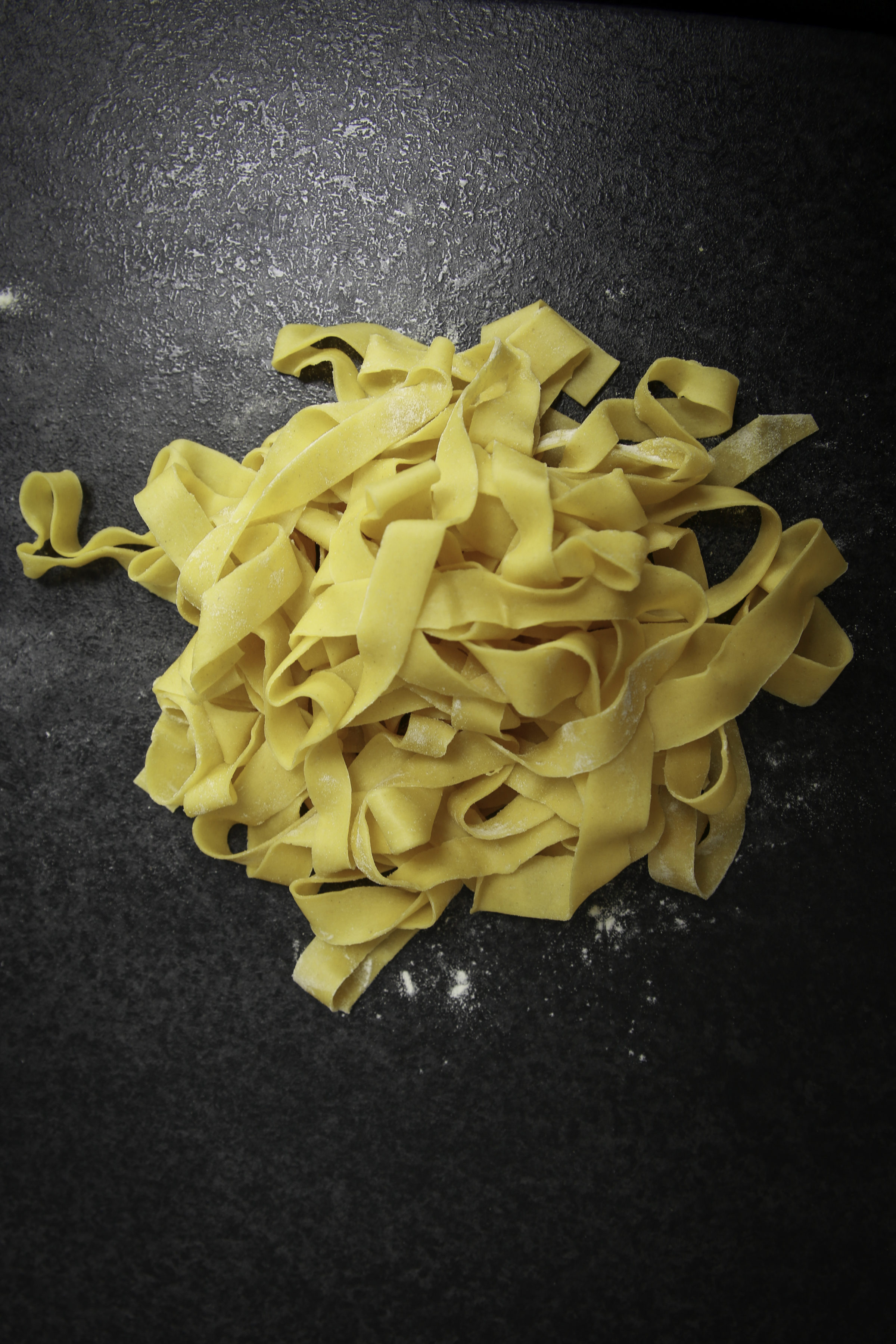 Pasta sauces are a whole other topic, so I decided to keep it simple and opted for garden peas, bacon lardons, torn mozzarella, and all fried off in a pan before being thrown in with the cooked pasta (which takes roughly three minutes depending on thickness, but you can judge fairly easily) and smothering it in parmesan. 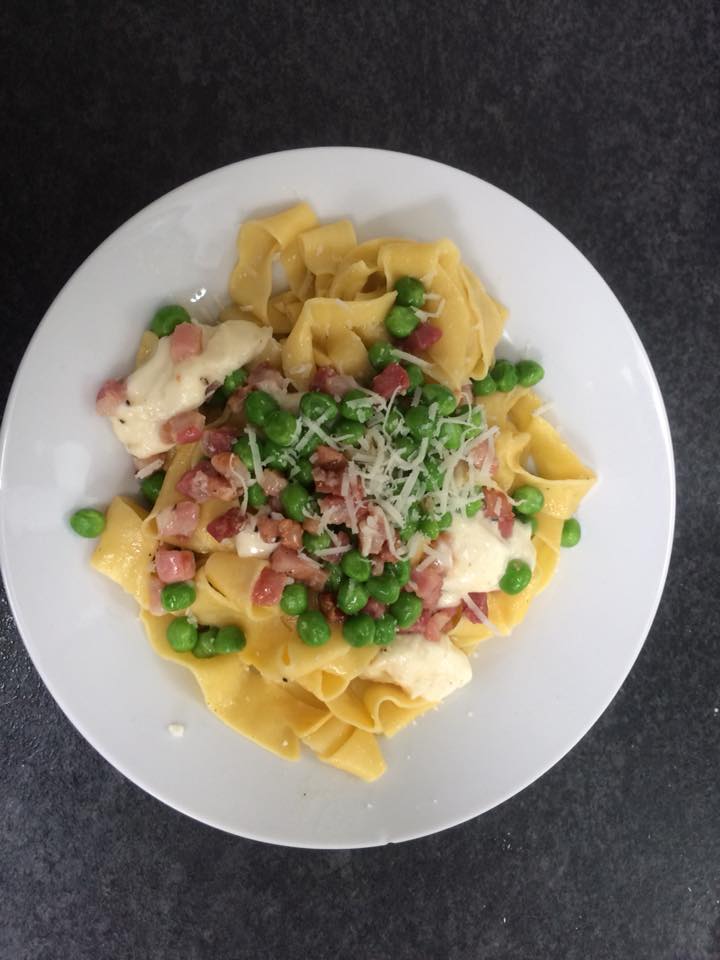 To say I was proud of myself is an understatement; I had visions of tears as I restarted the process for the fiftieth time because the dough wouldn’t come together or it didn’t roll out properly, but I am now a fully converted homemade pasta maker lover. It does take time but you should enjoy that.

The dough also lasts for a couple of days, so make an extra batch and pop it in the fridge.

I’m working on converting my mum, she got to taste the final product and was very impressed.  I’ve returned the machine in the hope she’ll give it a go herself. When I sent the finished photo to my friend she replied “You can’t beat wine and pasta night with the girls,” and she’s right. We’ve talked through life’s big worries at her kitchen island with a glass of wine while she’s rolled out the pasta; there’s something quite therapeutic about it. Give the girls a call, get the wine in, and get the pasta rolling.

This 19th-century terrace house in Ennistymon was transformed for just €25,000