In the second of our IMAGE x Dyson Self-Build Ireland series, we meet Anna, Conor and Jake, who have just moved into their dream home in Co Cork, and have plenty of helpful tips and advice.

Self-builds have surged in popularity in recent years. A complete labour of love, the payoff of seeing your dream home come together cannot be underestimated… but it’s not something people take on lightly.

Often a long and arduous process, there are several different factors to take into consideration before heading down the path of building your own home.

Just after finishing the process and moving into their own dream home, Anna, Conor and Jake have learned many lessons along the way. Below, they share their secrets on everything from budgeting to timing to what they wish they knew starting out. 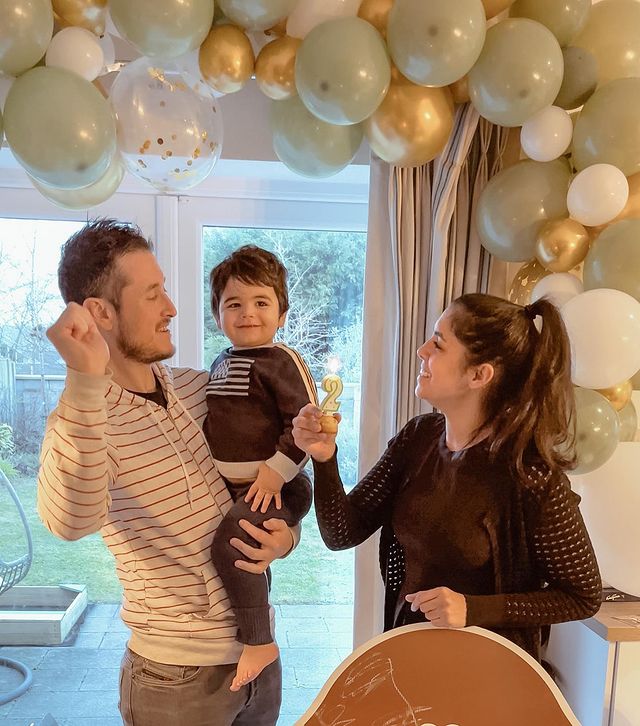 What was the land/building/space like when you first got your hands on it?
It was an open field on family land.

When did you start the project?
We had our first architect meeting at the beginning of 2018. We had to go twice for planning personally after a refusal. We found a builder quite quickly and the foundations were laid in August 2020. It took us 4 years in total to move into our home.

Has it stayed on timeline/budget?
Not really… We were hit with delays and price increases due to Brexit, Covid and more recently by the conflict in Europe. We were lucky enough to have started the build a while back so most of our prices were agreed on with our providers before the real hit but we were supposed to move in 8 months before we actually finally did move in. 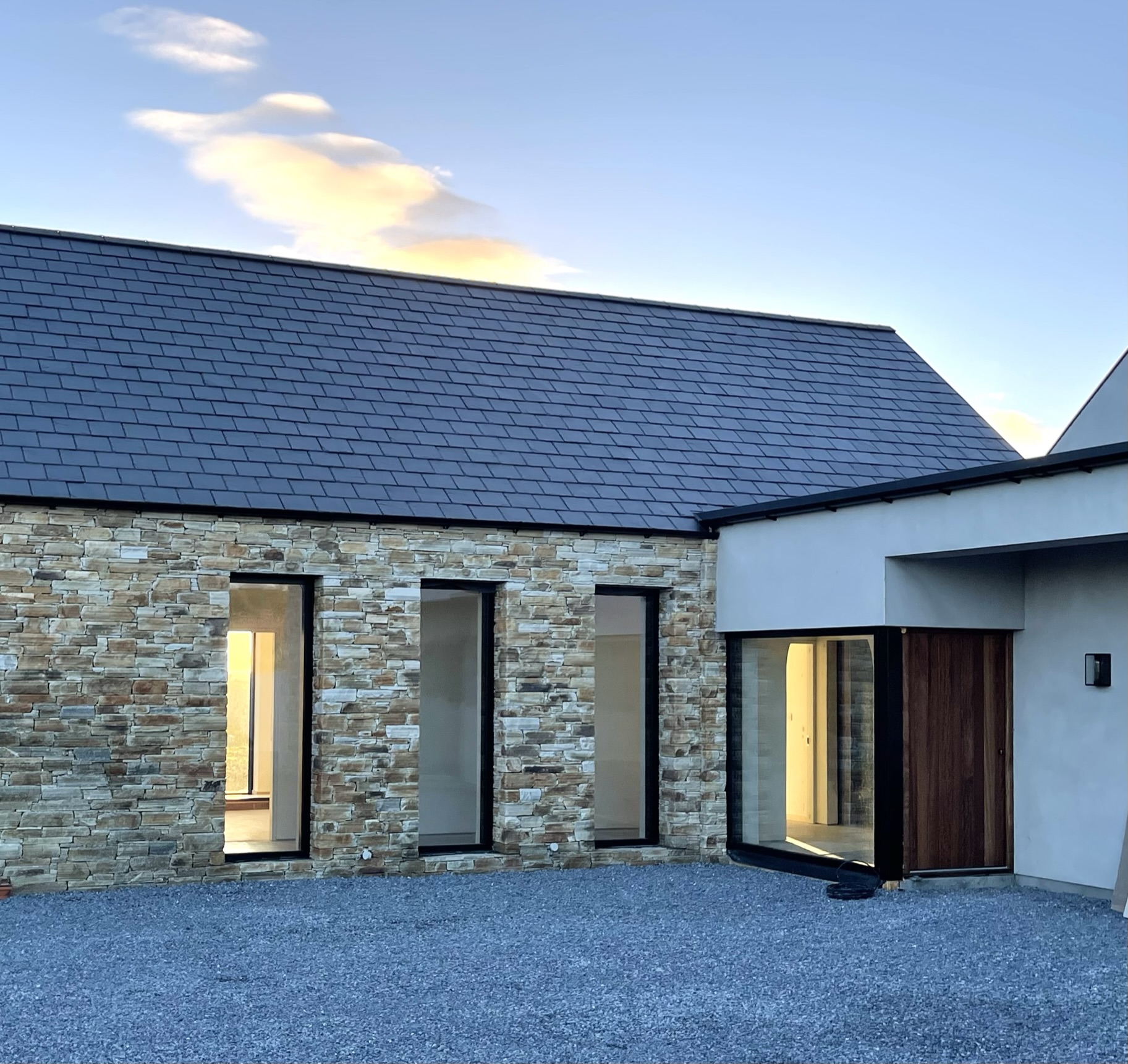 Did you stick with the original plan, or did it evolve as you progressed?
The original plan didn’t change much. We added a few features like some arched openings or a mezzanine. Our builder always told us that what costs the most in a build is when people change their minds along the way, so we have tried to stick to the plan as much as possible.

What hurdles have you encountered along the way?
Well… where to even start? All the side costs that need to be paid which are definitely to be considered while you’re saving – especially if you’re in counties where the council contributions are high. We were lucky to be working with a very transparent contractor so everything was clear from day one. Having said that, we found it difficult due to Brexit to have a real variety of choice for our bathroom wares or tiles or anything linked to interiors. Covid has slowed down the build itself as everyone knows. And now we’re seeing delays and increases on some raw materials due to the conflict in Europe. 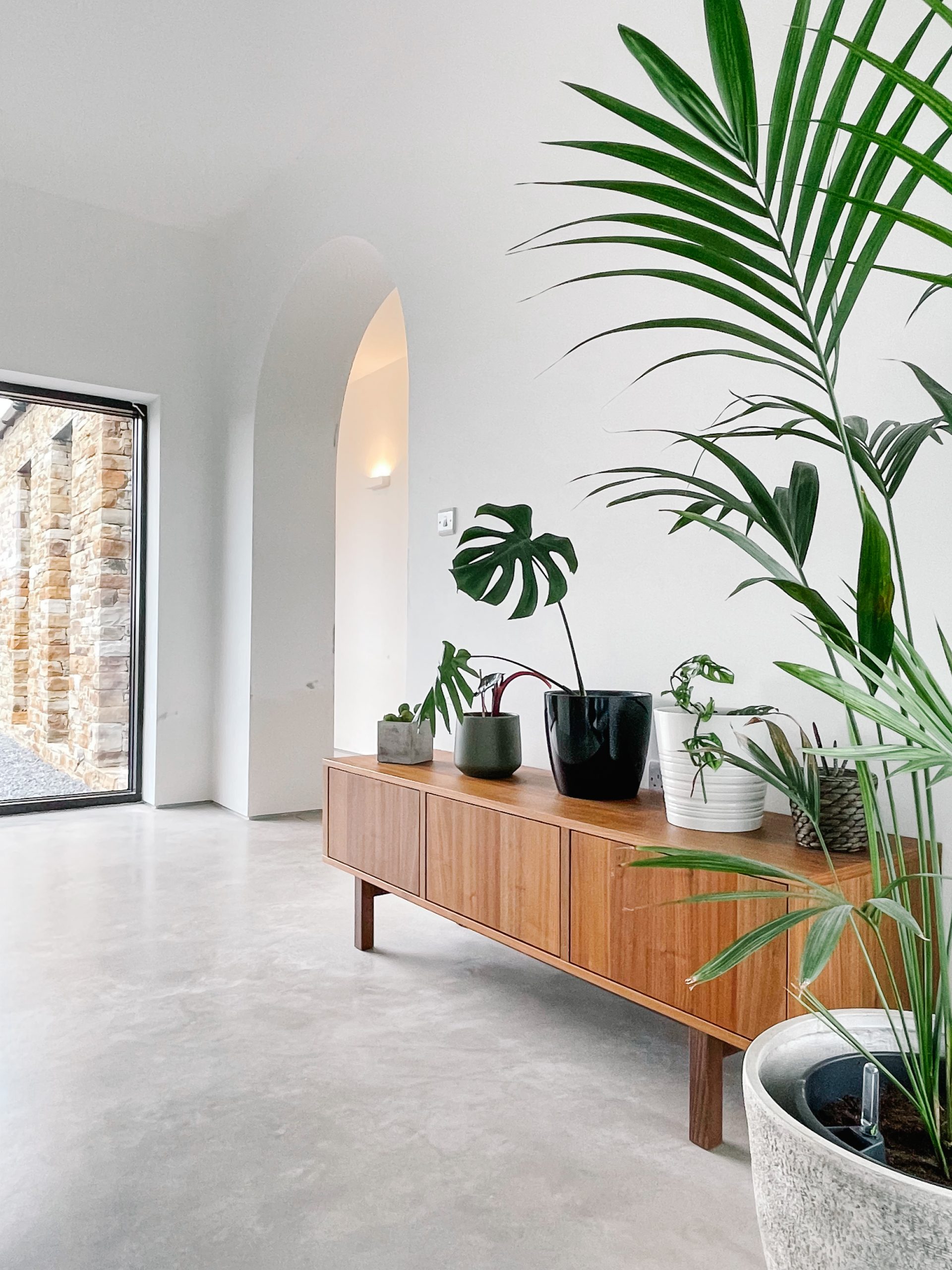 What aspect of it have you enjoyed the most?
Having a vision and seeing it come to life is probably what strikes us the most. We have spent hours researching, comparing and finding the perfect materials, equipment and furniture for each room. There is a real feeling of accomplishment. We’re very proud, it was worth all the tears, sweat and heated budget conversations!

What do you now know about renovation/rebuilds that you wish you knew when you started?
When you think the situation doesn’t look good, it can always get worse! We thought Brexit was the worst that could happen, well… 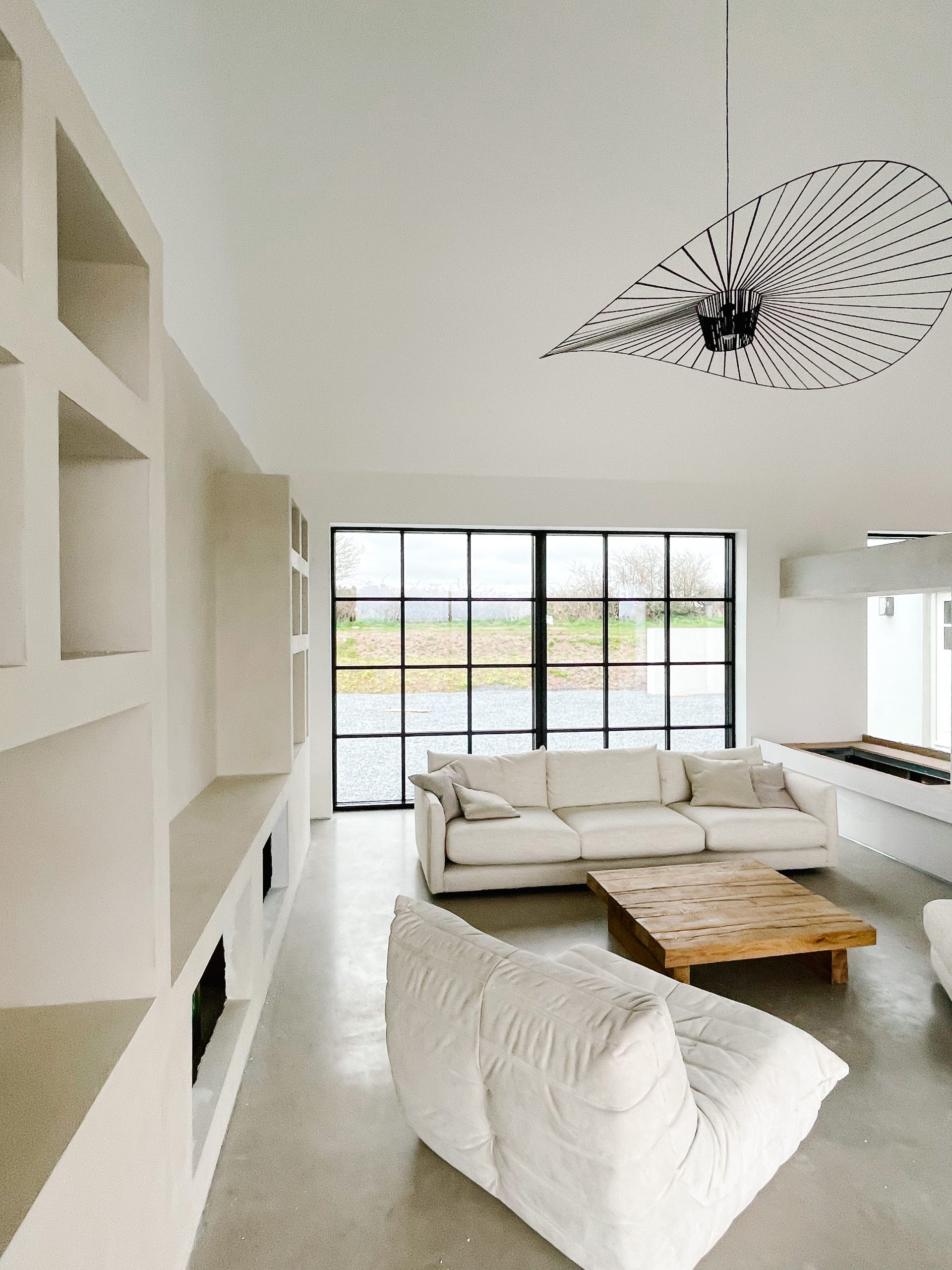 What advice do you have for homeowners who are about to take on a self-build/renovation?
Brace yourself! Patience and resilience are two skills that we have developed massively over the course of this journey. And also don’t settle for something you don’t really want to have in your house just because it’s convenient to others. Trust your gut, it’s your house so do what you really want!

How much will the project cost in total?
Let’s say a lot more than originally planned. We had to add 15 per cent to the budget, all down to special finishes and features we wanted inside the house.

How did you save money along the way?
We are both working for a bit company which gives employees stock options every year, which helped a lot. We’re also in our mid-thirties and forties, we have a good few years of savings behind us.

Did you seek finance? Was it difficult to acquire?
Yes, we have a mortgage with Ulster Bank. We will wait and see who we end up with!!! The mortgage process is not at all straightforward, there are a lot of documents and information to put together, before you even get a pre-approval. Especially since I’m French, I had to gather a few from my home country which can delay the whole process. Overall we were very happy with Ulster Bank. One thing though, with a self-build your funds are released through stages and some banks take very long to do so which can create some tensions with the providers. I would check on the bank policy when signing up for a mortgage. 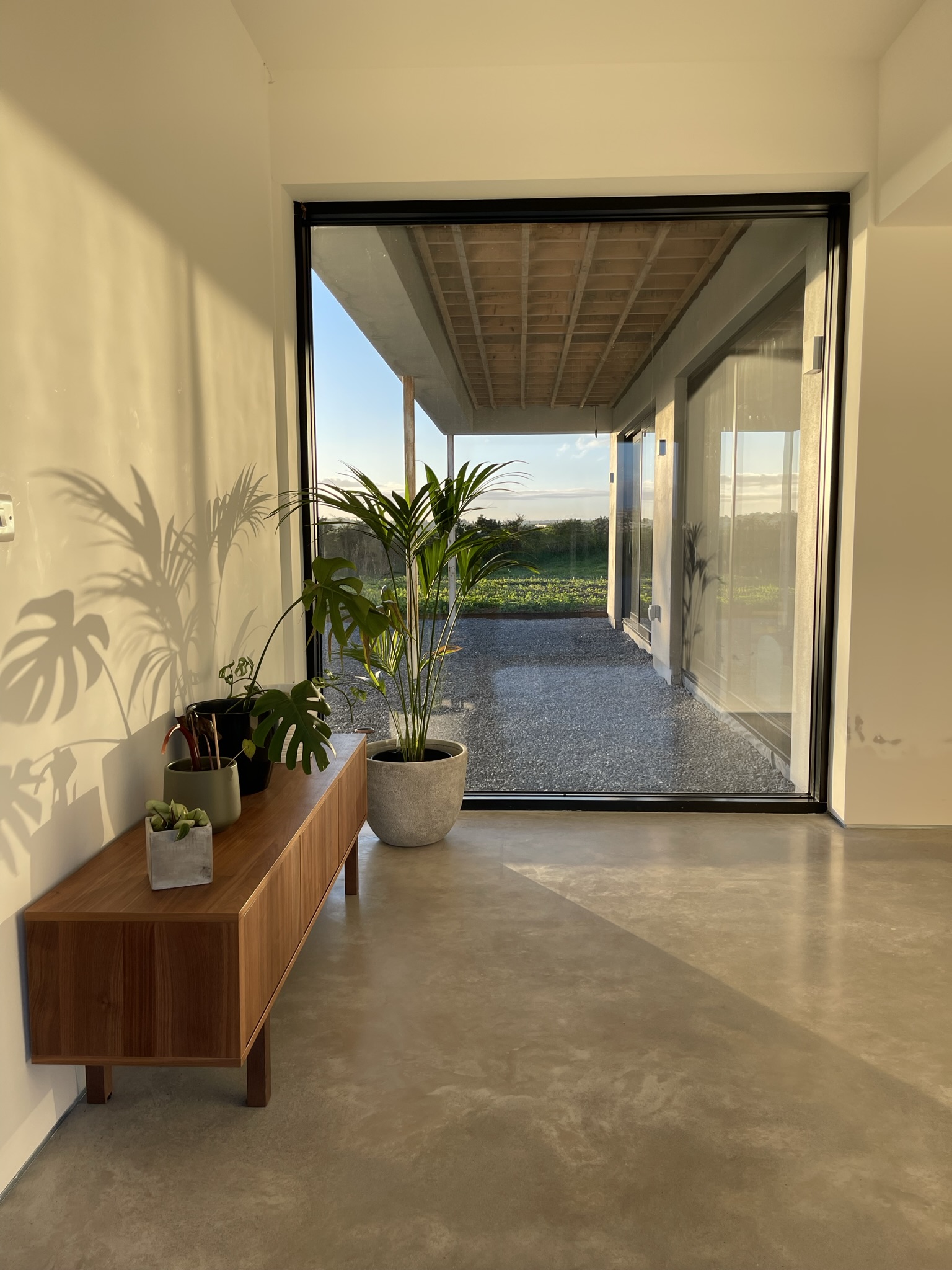 Anything else you want to add/tell me about the project?
We tried to mix a few styles for interiors but we think the particularity of our build is that we’ve used microcement in some rooms, the ensuite mainly, we have used polished concrete in the main area and applied lime painting which gives a Mediterranean/Aussie/French look that we just love. We’re using raw materials as much as possible. The house was designed to make the most of the natural light, it has massive windows and it’s south-east facing.

It takes bravery to follow your design dreams, particularly when those dreams require thinking outside the box. Dyson is, and has always been, a champion of design innovation and creative bravery. In this series IMAGE x DYSON salute Ireland’s brave self-builders who are making their design dreams come true.