Iconic Poolbeg chimneys may have to be encased in fibreglass

The Dublin City Council says preservation measures must be taken.

The poolbeg chimneys have been a landmark figure in Dublin’s skyline for nearly 40 years, and now, they are in desperate need of preservation.

The Dublin City Council recently announced that the chimneys may have to be encased in fibreglass or concrete to ensure their long-term survival.

This is expected to have mixed reactions since there was public outcry in 2014, when the ESB announced it was thinking of demolishing the chimneys.

FIGHT FIGHT FIGHT – Dermot & Dave have a scrap over the Poolbeg Chimneys! ??

Obviously, the reaction caused ESB to find a different solution and in 2015, a preservation measure was added to the towers instead. Steel caps were placed on top of the structures to prevent any further deterioration.

And while these caps have worked as a medium fix, regular maintenance costs a whopping several million euro.

“There may be a need for the structures to be encased in a new concrete or fibreglass casing”, said the Dublin City Council. “These interventions are likely to alter the appearance and integrity of the structures as originally designed.” 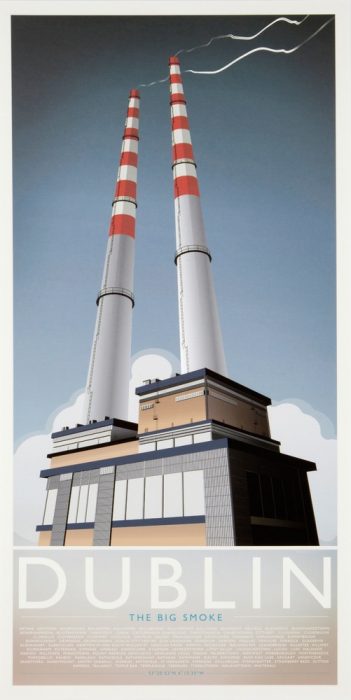 The signature red-and-white stacks were originally built in the 1970s with a projected lifespan of up to 40 years. They were a functioning part of the Poolbeg Generating Station until they were decommissioned in 2010.

Standing at over 207 metres tall near Dublin Port, they can be seen easily from most parts of the city and over time, they have become an iconic part of Dublin’s cultural landscape, dominating everything from cityscape prints to touristy tea towels.

However, before the ESB makes any alterations to the towers, they have commissioned specialists to carry out a condition assessment of the chimneys, an ESB spokesperson told The Irish Times.

For now, they have deferred any works until the assessment is finished and they know for sure how the fibreglass or concrete casing will impact the remaining lifetime of the chimneys.