The Return Of The Supermodels

The nineties were my formative years. I left school in 1993, when the supermodel fever was at full force. After growing up obsessed with fashion and hell bent on getting into the industry in some way, I was instantly and completely hooked on the coterie of gorgeous, powerful women who were taking over fashion. 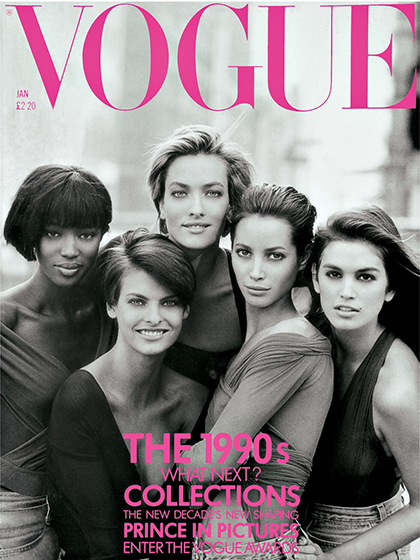 As soon as THAT Vogue cover came out on January 1st, 1990, shot by the inimitable Peter Lindbergh, it was as though fashion just came into focus. More so than it had been before. The models became mainstream – except, not really. They had an unbelievable beauty and presence, that oddly, was believable. They walked the line between fantasy and reality and they became the new celebrity, with actresses taking a back seat in terms of glamour.
That iconic video for George Michael’s Freedom €90, shot by David Fincher, showcased all the supermodels that featured on the Vogue cover became an instant cult classic. The models were seen in a way, they had not been previously as they lip-synched to the song. They caught the public’s fascination, as well as the designers and it is not an over-statement to say they ruled fashion’s new mood that championed strong women.

So, I for one, did a little giddy dance when I saw that Peter Lindbergh had re-called ?the girls? for a reunion shoot and Nowness filmed a video on set.
It features Cindy Crawford, Tatjana Patiz, Eva Herzigova, Nadja Auermann and Helena Christensen chatting about their memories and wearing chunky knits that hark back to the classic styling on black and white Lindbergh shoots from the nineties.
What struck me most of all was how extremely beautiful they looked as they have aged – it would obviously be that way, given their genetics and fairly charmed lives – but there is such a celebration in sparked in me to see the beauty of their lines, their maturity and worldliness that just comes with women over 40. Call me ageist, but I like it.

We become better as we age.
(And if we are photographed by Peter Lindbergh, of course!)