A prestigious award, a new fragrance, and a dance with Pharell Williams all in one night? This is the year of Karl Lagerfeld.

Do you think?he sleeps at all?

Life is good for Karl Lagerfeld. Not only was the fashion and design?connoisseur honoured with the Grand Vermeil Medal at his Couture Show last night, but he unveiled?Chanel’s newest fragrance in 15 years, and got down with Pharell Williams and Katy Perry – all in one night.

On the off-chance that you’ve not yet been to a Chanel show*, there is nothing quite like it.?His standards are legendary: where else would one come across a life-sized Chanel branded rocket that lifts 15 feet in the air? Or an entire supermarket with Chanel shopping carts and baskets, and even Chanel cereal, Chanel milk and Chanel toothpaste. And what about the Chanel airport?

Yesterday’s?autumn/winter 2017 haute couture presentation was a lot to take in as The Guardian put it, even by Karl Lagerfeld’s standards. His favourite haunt, Paris’ Grand Palais, was transformed by an almost life-size installation of the Eiffel Tower. Guests and models were dwarfed by the giant structure. 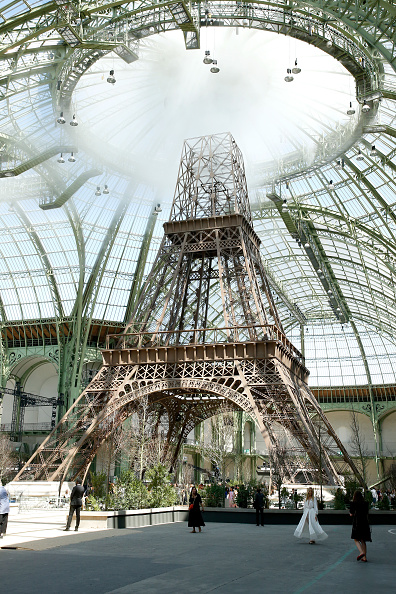 The clothes and models were every bit?Parisian and perfect: Coco pearl earrings hung delicately from the model’s ears and the classic boucle and tweed tailoring made a reappearance – as it does time and time again (but we never tire of it, Karl). We saw modern colourways and complex patterns with theatrical sleeves and volume. Accessories were kept to a minimum with traditional boater-style hats and simple clutch bags to compliment the sea of tweed jackets and skirt combinations. Tight, thigh-high black patent boots with clear perspex heels – gave the collection a modern edge.

His favourite muses were all in attendance including Tilda Swinton, Kirsten Stewart, Cara Delevingne, ?Ines de la Fressange, and, of course, Our own Rosaleen McMeel.

Incredible night @palaisdetokyo thanks to @chanelofficial and their pals @katyperry & @pharrell (the only man I would ever go to for jewellery layering advice). #gabriellechanelparty #editorslife #pharellwilliams #katyperry #chanel #fragrancelaunch #paris

And then, of course, there is the addition of ‘Gabrielle’, Chanel’s newest fragrance named ofter it’s founder Gabrielle Chanel – better known as Coco.?While the scent is yet to be unveiled, Chanel has released a teaser clip titled ?Gabrielle, A Rebel at Heart? – the18th episode of the brand’s Inside Chanel video series. Kirsten Stewart claimed in this month’s American Vogue that the scent “smells really good, especially on me”, so no doubt it’s a nose- pleaser. The new scent features?golden beveled bottle and a standout tuberose note distilled from Chanel’s private gardens in the south of France. How heavenly.

For all the Chanel inside scoop (and closeups of Pharrell?Williams singing and dancing) follow Rosie McMeel on Instagram at @rosaleenmc.

The best long-sleeved swimsuits to see you through spring