In praise of comfortable footwear: Emma Thompson wore trainers to accept her Damehood

I’ve always loved Emma Thompson. Her acting talent speaks volumes; in fact, she has to do and say very little to make an impact on screen – all the emotion is in her eyes. Sometimes, it’s a single look that says it all, as per The Remains of the Day. And on other occasions, she’ll let Joni Mitchell’s affecting tones fill a room ensuring no one can hear even one strangled sob, as she did in Love Actually. She appears on screen and it looks effortless; though her appeal has largely stemmed from the fact that she is always unashamedly honest in being herself. Thompson is an Oscar-winning force to be reckoned with – she has won two Academy Awards, three Baftas and two Golden Globe Awards during her 29-year acting career. But this hasn’t stopped her from dismissing the glossy sheen that goes along with those red carpets.

She has always favoured going against the grain when it comes to the expectant norms of high-profile events, be it in terms of her sartorial choices or her acceptance speeches. Remember when she famously carried her Louboutins in one hand and a martini in the other as she walked on stage barefoot at the 2014 Golden Globes? “I just want you to know, this red? It’s my blood,” she said of her red-bottom soles before chucking them, apparently in favour of pain-free feet. Well, Thompson continued her crusade for comfortable footwear at Buckingham Palace again today, where she was made a Dame for her services to acting and drama.

She threw out the regal dress code and paired her comfortable-yet-chic Stella McCartney suit with a pair of white vegan Stan Smith trainers, looking as stylish as ever, royal dress protocol be damned.

To accessorise, the writer and actress chose a poignant equal pay badge, which offset her black and navy suit perfectly. But more striking was her glowing skin and infectious smile; this is a woman truly at ease in her own skin, and this is perhaps, the most eye-catching detail of all. 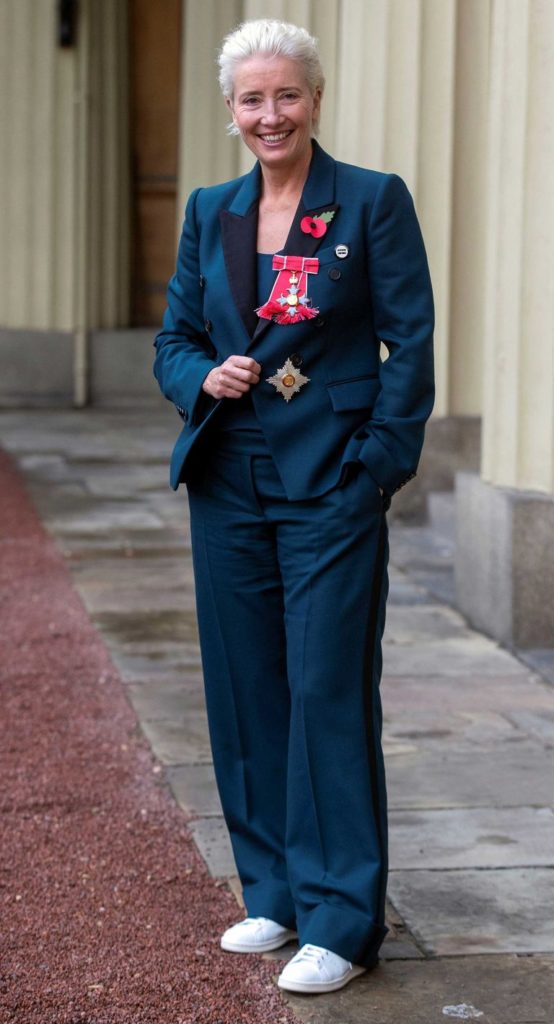 Thompson received the honour from Prince William and was joined by her husband of 15 years, Greg Wise, their daughter, Gaia, and their son, Tindyebwa Agaba Wise.

In accepting her honour, the 59-year-old also chose the opportune moment to shun tradition and instead of a handshake, jokingly asked the Duke of Cambridge if she could give him a kiss.

Congratulations to Dame Emma Thompson! Today at Buckingham Palace, the actor received her Damehood from The Duke for services to Drama. pic.twitter.com/1gSfaawBii

“If you’re first up, you have to be more formal on such an occasion,” the Love Actually star said, “but he’s looking wonderful and doing so well. He said, ‘This day isn’t about me, it’s about you’.’

Indeed, it was a day for the now dame, who doesn’t have to wear heels for any occasion should she choose not to – even when it comes to the royal family.

Oh, how we salute your choice, Dame Emma.