We go backstage with the MAC makeup pro team

To mark the 10 year anniversary since his debut show, Gareth Pugh returned to London Fashion Week to present his AW15 show last night. The anticipation in the run up to the show at the glorious V&A was intense as the fashion community awaited the dark prince of fashion’s latest vision.

And disappoint, he did not.?The show was dark in both production and tone as the models themed as ?Joan of Arc meets football hooligan? walked with edgy St Georges crosses across their face that makeup artist Alex Box applied with her fingers – each girl getting a slightly different interpretation of the design.

Working for MAC (who brought me along), Alex created the character with Pugh, and the models were described in the inspiration notes as, ?a tough, ball breaking, unstoppable woman. She’s adorning herself with a statement as opposed to makeup?.

Alex used her fingers to blend MAC’s basic Red Chromacare and basic Red Pigment into a paste which she then wiped down the face inthe shape of St Georges Cross. 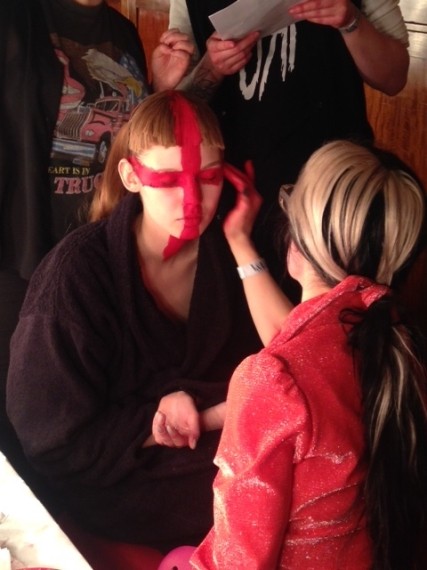 The atmosphere backstage was very calm and efficient as far as I could see, much more so than many I’ve worked on in my own makeup artist times. You could see the planning that went into such an event and all artists and hair people were working at top pace to get their girls moving along the conveyor line to ultimately end up with Alex for their red cross adornment.
The show itself was a stunning display of all that Pugh does best – tailoring, amazing shapes and fabulous fabric. All combined to show a dark side to Cool Britannia.

One of the UK’s best designers is back on home soil and you could feel the thrill in the air. This was a huge highlight of London Fashion Week 2015 so far.
It was an amazing piece of art and a pure joy to witness so closely.