Angela Scanlon: The Girl On Fire

From fashion styling to fronting one of the UK’s biggest TV shows, Angela Scanlon is having a moment and enjoying every single second. Rosaleen McMeel meets the Irish presenter, broadcaster and style influencer.

Angela Scanlon bounces into Johnnie Cooke’s restaurant in Brown Thomas, apologising profusely for arriving 40 minutes late. Before I can respond, I’m enveloped in a bear hug. An earlier meeting had overrun, she explains peeling off her cashmere crew-neck jumper and depositing her Fendi cross-shoulder bag on the table beside her. What the young TV presenter lacks in punctuality, she more than makes up for in personality. A ball of energy, she barely takes a breath describing how much she loved shooting with the IMAGE team the previous day. Thankfully, I manage to get her to pause long enough to put in her order for a crab salad.

Scanlon is an all-or-nothing type, born in Meath, but now based in London with husband Roy, who works in retail technology. She puts her heart and soul into everything she does, which is presumably one of the reasons she was chosen to co-present the BBC Two reboot of Robot Wars alongside Dara – Briain. The first episode garnered a cool two million viewers. ?It’s like you’re entering this parallel universe,? says Scanlon. ?It’s bonkers and wonderful and in a weird way feels perfectly timed because it’s pure escapism. You can [temporarily] leave behind Brexit and all the horrible things happening in the world, and there’s a huge amount of the audience who watched it as kids with their siblings.? After a 12-year-hiatus, Scanlon is excited about the show’s return, but also a little daunted to be fronting a series with a cult following that was so well loved. ?People are resistant to change,? she says, citing Top Gear as a prime example. ?But it’s heartening people still care considering there’s so much talk around the death of TV.? Robot Wars? marks a significant step for the Irish presenter who cut her teeth in the industry with RT? documentaries such as Oi Ginger , Full Frontal? and Total Exposure? before advancing to Getaways , the travel show, and as digital host on The Voice?for BBC. She co-presents a Saturday morning show on Virgin Radio with comedian Russell Kane and this summer has seen her standing in for The One Show? host Alex Jones, presenting to audiences of five million viewers upwards. 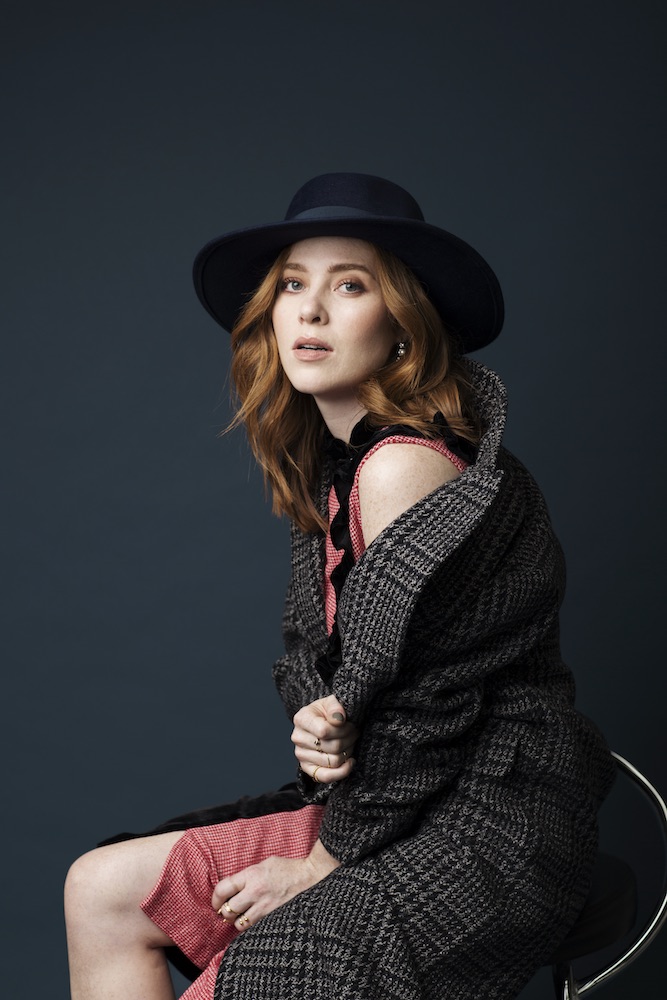 Despite her ever-evolving CV, Scanlon claims she rarely gets recognised. ?People give me a little smile, but I don’t think it’s recognition, just that I have a friendly face,? she says, before pausing and rethinking that claim. ?Well, that’s only sometimes: I have a lethal resting bitch face if I’m in my own little world.? The presenter’s refusal to take herself too seriously is one of Scanlon’s most appealing qualities and makes her relatable both on and off screen. But, I wonder, does she ever experience a flipside to her upbeat attitude?

?I definitely go quiet and very inward, especially when I’m tired. I work at such a high rate and so the crash off the back of that is silence for days. I struggle with that and I fought against it for a while, but now I think it’s cool, I’m just plugging myself in – it’s a recharging situation,? she says. ?I’ve started to take time off. It’s the first time in probably ten years that I’ll leave home without a laptop. I finally realise that I don’t need to pitch something to someone every single day. The problem is my head works at quite a rate so I need to put it out there some way.? Scanlon honed the art of pitching while working as a fashion journalist in Dublin. Back then she was also assisting stylist Aisling Farinella, who was happy to reunite with her prot?g? for our shoot. The two share an appreciation for Irish designers and it’s obvious that Scanlon learned a lot under Farinella’s tutelage, lending her a slightly irreverent approach to dressing. ?I love colour. I love Simone Rocha, Natalie B Coleman, Danielle Romeril. We Are Islanders have amazing trousers and Richard Malone is a brilliant new conceptual designer – I think he’s going to be the next J.W. Anderson. Things are more casual in London. I’ll wear flat shoes more often there because, on a practical level, you do more ‘schlepping? around. I’m open to’smaller brands like Sadie Williams who does gorgeous lam?-printed pieces, Ashley Williams (not related), and Gu?l Hu?rgel. I’m currently obsessed with dressing like?an emoji! Isa Arfen is amazing – she does lots of colour. She also does gingham. I really love anything that resembles a tablecloth or a tea towel.? 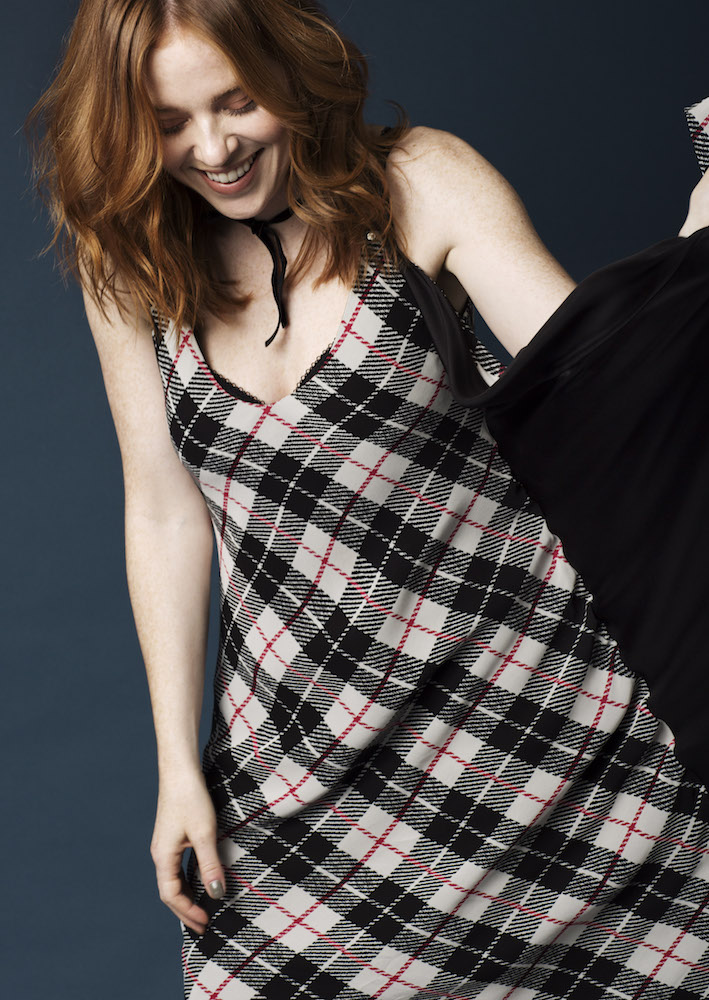 Her penchant for tiny checks brings us on to her interview with Ryan Tubridy when the Late Late? presenter mocked her ?picnic table? look. ?That was a Simone Rocha dress!? she says, incredulous at his reaction. ?Look, I know his personality and I take it as a compliment that in that moment he was comfortable enough to say that to me. That whole interview was chaotic and usually I’m the one being chaotic and the other person steadies the ship, but he has the potential to be very giddy, so it was actually very enjoyable in the end.? The 32-year-old describes her personal style as ?a kind of considered dishevelment?. ?I wear jeans and a jumper most of the time. I have two of these jumpers,? she says pointing to the royal blue knit that’s currently resting over the back of a chair. ?They’re like comfort blankets. My default is a jumper and a pair of jeans or a shirt. I enjoy a shirt on occasion. I either go for a uniform or I go nuts and really dress up.? Outside of magazine shoots, she rarely works with stylists, preferring instead to do her own thing. When?it comes to presenting roles, occasionally her brand of ?considered dishevelment? is overruled. She tells me she wanted to wear a jewelled tuxedo while hosting red carpet interviews at the BAFTAs, but the producer advised her to kick her look up a notch. In the end they connected her with the designer Nicholas Oakwell. ?His dress cost €28,000! I loved it, but I nearly ripped it off me at the end of the night because I was so full and it was so tight. I had to sit on the edge of the seat because I was in such pain, I thought my ribs were broken.? As for the jewelled tuxedo? It did get its day out at the BAFTA Television Craft awards, a slightly less formal affair. 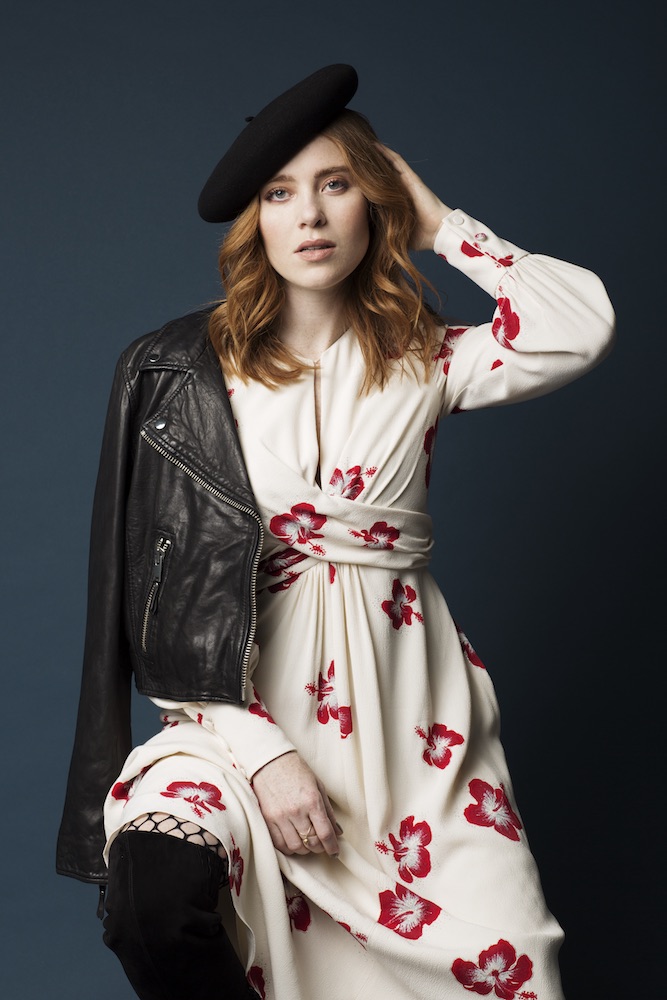 Conversation quickly turns to jewellery when I admire her glass locket from London brand Locquet – a wedding present from her husband – that contains an ?A?, a ruby and a tiny gold wishbone. Her interest in jewellery has evolved from decorative to sentimental, a symptom of growing older, she claims. ?I remember reading something by a New York jewellery designer, who made symbolic, talisman pieces. She said there’s something very powerful about buying jewellery because, aside from a watch, there’s nothing practical about it. If you buy a piece of jewellery, it’s purely for ornamental purposes so you’re more invested in it and I thought that was quite a romantic way to look at it.? The vivacious presenter claims that most of the jewellery she owns she’ll ?wear to death?. Her favourite is a gold heart-shaped ring. ?I bought it for €7 and it was just costume. I wished it was a proper ring so I could have it forever, so Roy got it made for me as a Christmas present. I haven’t taken it off since.? Scanlon knows what she likes and is confident in her choices from jewellery to clothes. This confidence translates equally to her career. ?Doing Oi Ginger , and the other programmes was like the beginning for me, because it was the first time I felt comfortable being myself. I remember the director Vinny Beirne saying, ?Just be yourself?. Being given permission to be myself was hugely liberating. It was confidence-building to know that a director had a massive level of trust in me to do what I wanted to do.? Scanlon describes Robot Wars? as ?pretty dreamy as gigs go?. She’s drawn to the weird and the wonderful and it has plenty of both. When I ask if she could ever see herself with her own chat show, she doesn’t dismiss the idea?but is measured in her response. ?I find it difficult to imagine because unfortunately, most chat shows exist with male hosts. In terms of looking to somebody, you don’t have that reference point. Ruby Wax was probably the last comedy genius.? RT? had mooted the idea of a chat show with her after she completed Full Frontal , but she felt it was premature. ?You need to have a number of years behind you and a level of maturity to be able to host a chat show. Look, we’ll see, but it’s all about timing and being really considered in the choices that you make.?

We wrap up our interview the way it began – with a warm hug – and Scanlon heads off to explore the shop floor. I see her disappear among the designer rails and something tells me she’s just getting started. 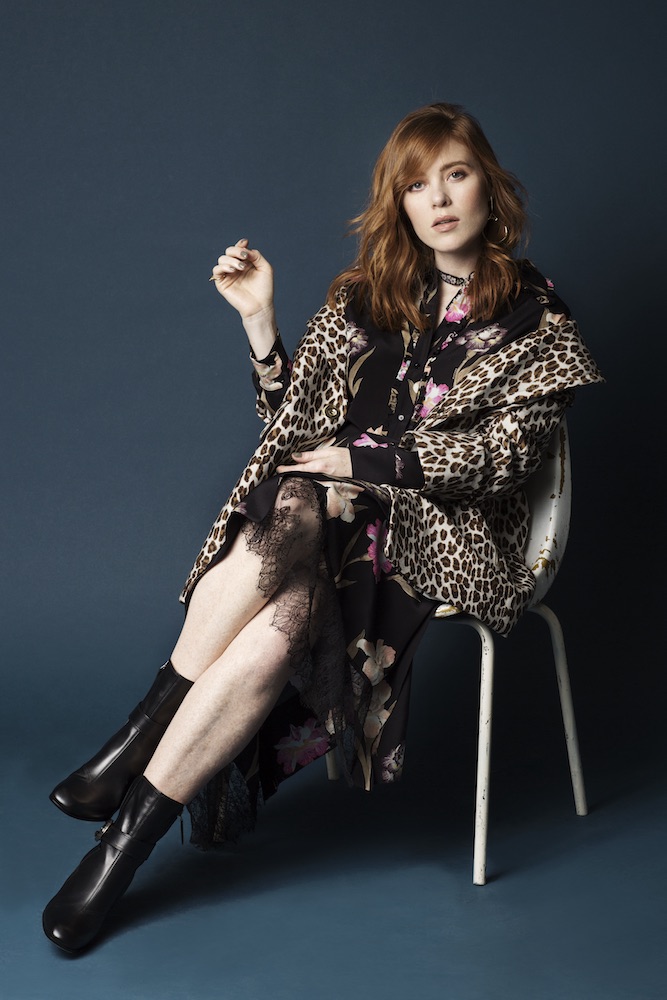 Read this interview and more in the IMAGE Magazine September issue; on shelves now.

Groundbreaking it ain’t, but the roll-necks versatility could make it your winter wardrobe transformer. There’s one item in your wardrobe...

The Duchess of Sussex’s status as one of the world’s biggest influencers has been cemented by statistics from global fashion...

For all the celebrated loveliness of a wedding, getting dressed for the occasion can be anything but. From the autumn...

“During lockdown, I felt like I lost my sense of self and my confidence plummeted. I had to figure out...

A year of no clothes shopping sounded so completely insurmountable to Sophie White that initially, all she had planned to...

Sporty turns chic. ‘Sports-luxe’ and ‘athleisure‘ are two of the more contemporary buzz words you’ve probably heard of that have...