Being an adult is realising that Carrie Bradshaw could never have afforded her lifestyle, her apartment *or* all the designer things she wore. That’s the true mark that childhood is over. Sigh.

We’ve long wondered how Carrie Bradshaw could afford so many fabulous things on what we can only assume was a less than generous salary. Turns out she was living a champagne lifestyle on a lemonade budget.

Recently speaking to Vogue for their “Life in Looks” series, SJP walked viewers through her personal style over the years, picking a few standouts to discuss – one of which was a green dress she wore in 2002 while pregnant and filming Sex and the City.

“I can tell you everything that I know about this outfit,” she says as the camera hones in on the perfectly colour-blocked look. “Ok, that is not a real Hermés bag, just so you know.”

“Pat had a person, and she was like, ‘Do you want one? I can get you one.’ ‘No, I don’t really, not… I don’t need one’. But this isn’t real,” she stated rather matter-of-factly before grimacing at the camera in light of the admission. 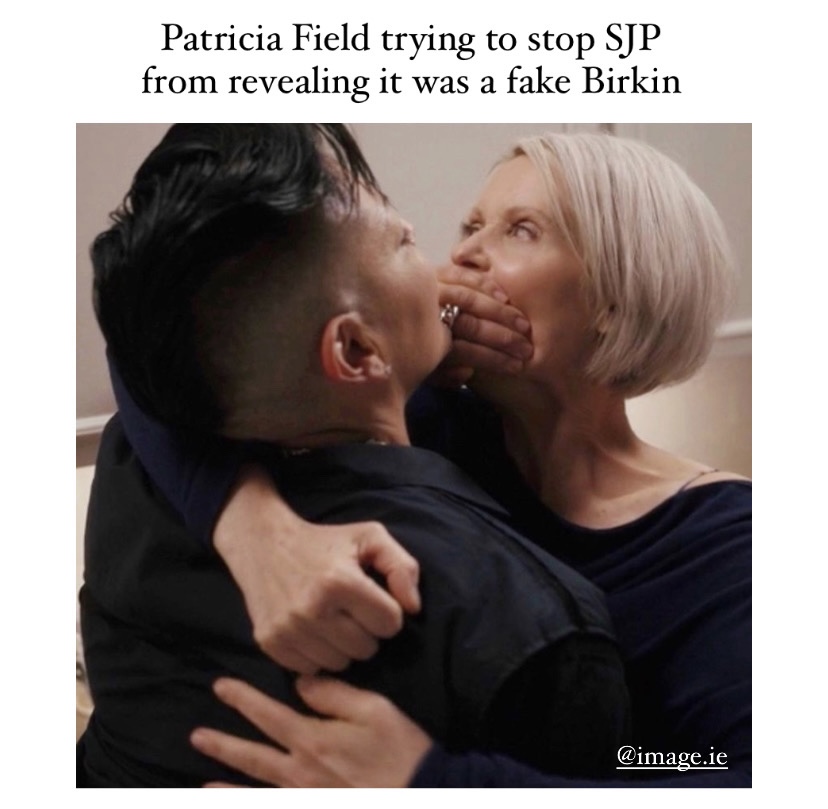 The dress, however, is real. “The dress is real and it’s Juicy Couture.” As can be seen from the photo, SJP was “super pregnant” at the time. Her SATC character was not though, so the Birkin was supposed to be used as a way to detract attention from her growing bump. “Super pregnant. Did our very best to… Look how big that bag is. I mean, that bag had one job to do and it did it very poorly. Maybe if it was a real Hermés bag, it would’ve done a better job,” she joked.

In other news, stylist Patricia Field, the woman behind all of the iconic outfits on Sex and the City and later Emily in Paris, also recently revealed what some of her favourite outfis from the second season of the breakout Netflix hit are, and they were unexpected, to say the least.

Top of her list was a get-up Emily wore in episode four, comprising a Marie Katrantzou dress, Vassilis Zoulias cape, brown Scorpios boots and a chequered hat from Shein with a vintage brooch. Second place was more surprising though and went to a high street outfit… from Pretty Little Thing. Yes, really. Worn by Mindy as she performs “Falling Slowly” while busking in Paris, the matching set is actually still available and costs less than €55 for both pieces.

Other items to get a mention include Sylvie’s Christian Siriano suit from episode 10, Julien’s colourful fashion show outfit and a tulle dress designed by Giambattista Valli for H&M. Worn by Lily Collins, who plays the series lead, the dress is very in keeping with Emily’s fairly out-there fashion choices, but many fans of the show have still been shocked to learn that Field would rank high street pieces so highly.

Commenting that she wanted to keep things interesting because “fashion these days has become rather monotonous and boring”, the stylist said that season two was “the perfect opportunity to develop Emily’s style as more colourful and optimistic”. Safe to say she definitely achieved that.

Newspaper print clothing is back thanks to Carrie Bradshaw