Dublin-based Rasa Levinaite opens up about her unusual hidden illness Arteriovenous Malformation (AV Malformation), which affects her right leg.  She tells Jennifer McShane how she copes with the condition, the countless surgeries she's had to undertake, and why she had to think carefully about some very personal choices as a result.

“I was four years old when my mum noticed that my left leg was quite longer and wider than my right leg. I grew up in Vilnius, the capital of Lithuania and I was lucky that there was a Professor who worked in the local hospital and was very interested in a condition known as AV Malformation (Arteriovenous Malformation or AVM) and he recognised that it was what I had,” Rosa explained.

AV Malformation occurs when a tangle of abnormal blood vessels connect arteries and veins which shouldn’t be connected. In the average leg, the blood should travel through the artery with oxygen-rich blood travelling to the end of the leg and then passing into the veins. Your veins normally carry the oxygen-depleted blood back to the lungs and heart. But AVM disrupts this vital process. Instead of blood going to the final destination it’s redirected into abnormal blood vessels. With time these abnormal blood vessels rupture. This illness can occur in any part of the body, the most common is the brain and spine.

The condition can manifest itself in the brain and other more perilous areas of the body, so Rasa says she feels lucky that it only affects her leg. 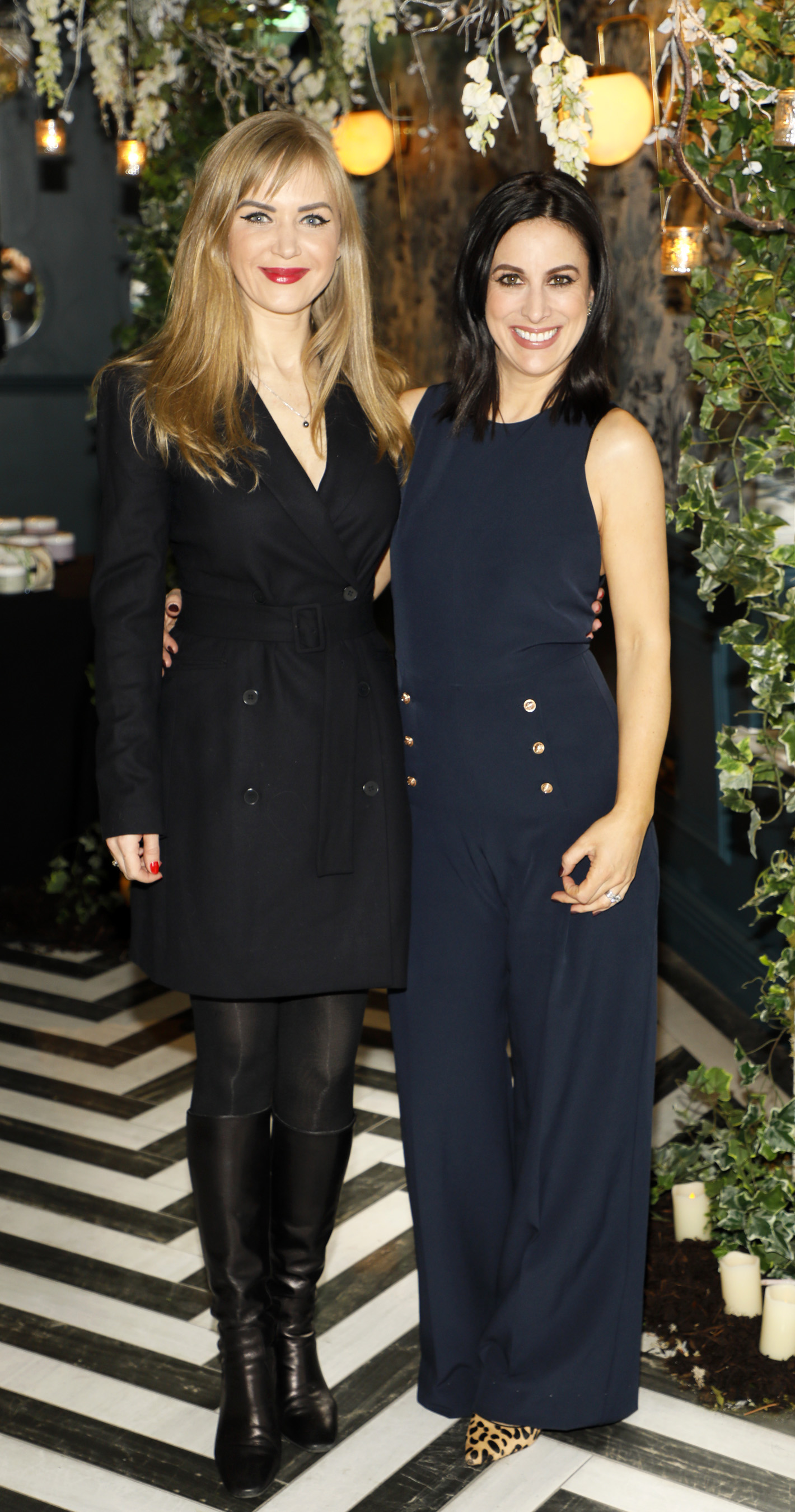 “I am actually lucky to have it in my leg. It usually starts when you are still in the womb and there is no explanation as to why it happens. The main treatment is embolisation – a process where they deliberately block the abnormal blood vessels.”

Surgeries were commonplace for Rasa as she grew up, some of which were very successful until more abnormal cells began to grow.

“I had my first surgery when I was nine-years-old. They did take out a lot of unnecessary veins and arteries which made it better. But they couldn’t go deeper and do embolisation as we didn’t have the necessary equipment in Lithuania. It did stop it in its tracks temporarily, although I ended up with one leg 4cm longer and about 2cm wider, which I’ll have for the rest of my life,” she continued.

She explained that the process of Embolisation is quite dangerous, as you’re working so close to the nerves, and after one surgery, significant nerves were damaged, leaving unable to lift her foot for almost a year. And as new abnormal cells may always continue to grow, there’s a chance surgery will always be needed.

“After that, I had more than 10 (I lost count) surgeries and embolisations, the last one I had one-and-a-half years ago. And I know I will have to go back for more.”

Being that her condition is hidden, she says no one would ever know unless she showed them her CT scan. “As I don’t show my leg in public, no one knows, unless I show them the MRI photograph. However, she adds that for years, her scarring left her with little self-confidence. 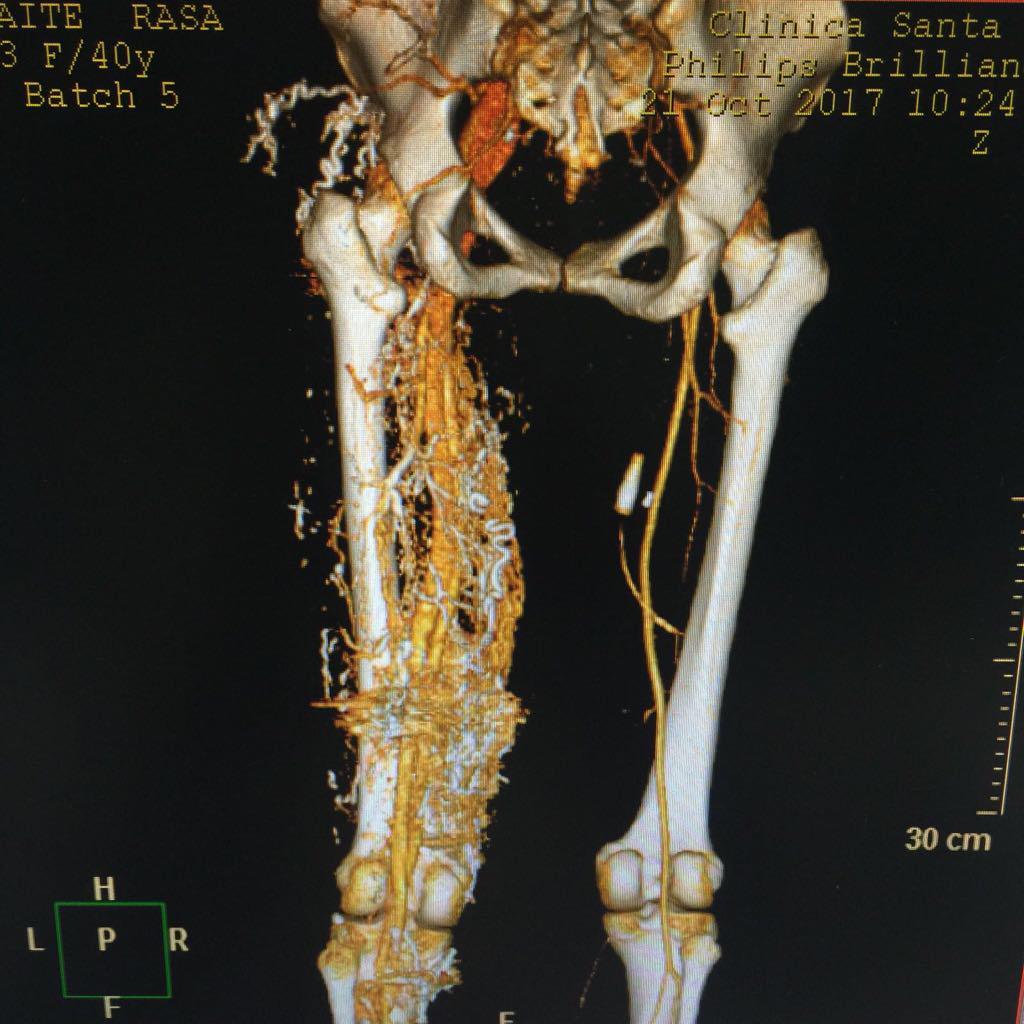 “It wasn’t easy, after my first surgery as I was left with a huge scar throughout my leg. I was embarrassed about it. It got worse in my teenage years. I would always wear jeans – even if it was 30 degrees. I also had to wear special insoles in my shoes to reduce the difference between my legs. This meant I couldn’t wear sandals or normal shoes, just closed shoes or boots. If a group of friends would go to the lake or the sea, everybody would swim and enjoy themselves and I would just sit there fully-clothed, sweating and creating silly excuses about why I didn’t want to go swimming or even get into a bikini.”

“When I was 29, I went for one of my surgeries and asked for plastic surgery. They did what they could, it definitely looks better but I still have a scar from the top to the bottom of my leg. But with age, I learned that it is what it is, and I should enjoy my life. I still have some restrictions but I don’t have a problem going to the beach full of people. At the end of the day, I’m not the only person in the world who has a scar.”

Reaction to her leg, Rasa explains was mixed when she was growing up, but she finds it easier to deal with now.

“To be honest, I feel lucky. I could have lost my leg if the doctor didn’t realise that I had AV Malformation. I remember a girl at a hospital very similar to me who lost her leg – she was 16 years old.”

The condition is restrictive in more ways than one as Rasa explains she has been advised not to have children as she could lose her leg as a result.

“This illness is definitely harder for women because if you have it, it’s extremely dangerous to have a baby. If you have AVM in your brain it can be fatal. I was advised not to have kids as there was a very high chance that I lose my leg. I knew the woman with AVM in her arm, she also was advised not to have the kids but she decided to risk it. She lost her arm straight after her baby was born.”

Her illness, she says, has given her drive to succeed. “I don’t want to scare people with this condition, and there are lots they can do increasingly year-on-year, but like all rare conditions, funding and research can be slow. It has focused me throughout my life, I studied accountancy and came to Ireland over 17 years ago, I worked my way up to now owning The Wicklow Street Clinic. I suppose what doesn’t kill you makes you stronger!”

She says awareness and early detection of the condition are key to survival rates, so she’d like to see more tests done, particularly to young children.

“I want people to know more about this illness and do critical embolisations on young children, as harrowing as it can be for them. With new technology they might be cured for life, so watching out for potential symptoms, such as differences between limbs in young children is very important – be it swelling or an anomaly due to AVM. Some people have been fully cured of this illness with early detection but many have not.”

“I would also like Ireland to have specialists and the correct equipment to deal with this illness. It’s not easy travelling back-and-forth to have surgeries; it would be so much easier just go from the hospital straight home and have a specialist right there if you need them. The technology is much better now than 30 years ago, so if you find this condition at the beginning before it has a chance to grow out of hand (with a web of abnormal blood vessels) it means you have a good chance of getting rid of the illness for good.”