From the car-crash that killed his baby daughter to his son’s brain cancer; the heartbreaking tragedies Joe Biden overcame

The new First Family has had its fair share of tragedy, writes Amanda Cassidy

It was a tearful farewell – the last before he took up his new post.  Last night Joe Biden spoke from the heart as he thanked his supporters in Delaware who he said had stuck by himself and his family in good times and in bad.

And there had been plenty of bad.

A week before Christmas in 1972, his former Neilia was driving the family’s station wagon when it was hit by a truck. Reports at the time suggested the car was thrown 150 feet into an embankment, such was the force of the impact.

The family was pulled from the wreckage of the car and rushed to Wilmington General Hospital, but it was too late for Neilia and their 13-month-old daughter Amy, who were pronounced dead on arrival. Their two boys were luckier. Beau sustained a broken leg and Hunter, a fractured skull.

Speaking in his personal memoir Promises to Keep, Biden says instinctively he feared the worst. He watched his sister answer the phone in his office and got a tangible feeling of Neilia’s loss. “She’s dead, isn’t she?” he is said to have responded.

It was difficult to manage his grief while also caring for his two young and now traumatised children but he credits his sons for having saved him too. He wrote about how suicide seemed tempting, such was his devastation, but he also knew he could never abandon Beau and Hunter with their mother and sister also gone.

“The incredible bond I have with my children is the gift I’m not sure I would have had, had I not been through what I went through,” he said in a speech to Yale in the 1980s.

After a desolate time of anger and grief, Biden ultimately returned to the Senate and focused his well-being on his sons.

In 1975 he met student Jill Jacobs. They married two years later and they went on to have a daughter together. But the bond that Beau Biden and his father shared as the boys grew up was special.

Together the brothers went to Archmere Academy, the same Catholic high school their father attended. There Beau was called “The Sheriff” among friends. He served in the military and won a bronze star.

Sadly, in 2010 Beau suffered a stroke, on the cusp of his political career. He underwent surgery, chemotherapy, and radiation but in 2015 his health took a turn for the worst. He died aged just 46. The statement the family released at the time was heartbreaking.

“The entire Biden family is saddened beyond words. We know that Beau’s spirit will live on in all of us—especially through his brave wife, Hallie, and two remarkable children, Natalie and Hunter.” 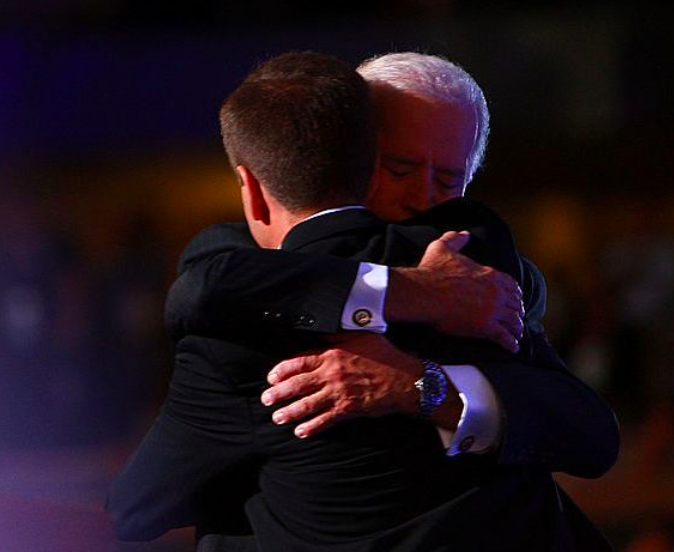 In an interview a few months later the former Vice President tearfully recalled his late son saying, “Beau should be the one running for president, not me. Every morning I get up Joe, not a joke, and I think to myself, ‘Is he proud of me?”

“Beau had a way of instilling courage and calming me,” he wrote in his memoir. “Beau would always grab my arm just before I walked onstage and pull me back toward him until I was looking into his eyes. ‘Dad. Look at me. Look at me, Dad. Remember, Dad. Home base, Dad. Home base.'”

Hunter, Joe Biden’s second son was embroiled in the 2020 election campaign after a hard-drive from a laptop that reportedly belonged to him was given to Trump ally Rudi Guilliani. Hunter Biden is also in recovery after addiction problems.

Despite the litany of tragedies, the closeness of the new First Family reigns. Hunter named his son Beau while his late brother Beau also named his own son Hunter.

And in Delaware this week, as Joe shed a tear for the place that saved him. He even referenced Ireland in his emotional speech.

“James Joyce is said to have told a friend, that when it comes his time to pass when he dies, he said, ‘Dublin will be written on my heart.’ Well — excuse the emotion,” Biden said, his voice cracking.

After a pause, Biden said: “When I die, Delaware will be written on my heart. The hearts of all the Bidens. We love you all. You’ve been there for us in the good and the bad. You never walked away. I am even more proud to be standing here, doing this from the Major Beau Biden facility.”

“Ladies and gentlemen, I only have one regret: that he’s not here, because we should be introducing him as president.