More than €67 million was announced this week for infrastructural projects across Galway City. But locals are keen to maintain the city's quirky charm, writes Amanda Cassidy

Cities, like dreams, are made of desires and fears, said Italo Calvino, but all the best have pretty decent architecture, a buzzy food scene, and smart places to stay too.

This month Condé Nast named Galway as the friendliest City in Europe, describing it as Ireland’s “alternative city – more boho and leftfield than Dublin and Cork, a place that draws buskers and artists, dreamers and schemers like a magnetic force.”

But at the same time it beat off places like Lisbon and Reykjavik, Galwegians were pointing out that the European City of Culture 2020 had come up against some imagination problems that were more nightmares than dreams.

Take the 43 ugly orange bollards that were installed last year in the ‘hatched’ area at the upper end of Woodquay to prevent illegal parking in the middle of the street. Locals have described them as “eyesores” with one business owner noting that it marked a distinct lack of ambition when it comes to solving problems. 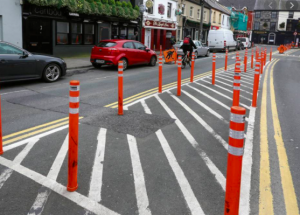 Galway has an abundance of culture, food, cobblestone streets, and lough views to make up a tourist itinerary many times over.

The worry is that some Irish cities lack the grace and grandeur of their European neighbours, not out of integrity, but out of a lazy problem-solving approach by the Council. Take Málaga in Spain, with its pretty road dividers made up of 7ft-high flower bollards, or the painted bins in Lake Garda in Italy. Public city benches in Girona are magnificently tiled, and even the roundabouts in Norway are adorned with perfectly-manicured gardens.

We have the natural beauty in this country, but it’s the cities that keep the visitors coming back. Luckily, despite this blip in the landscape, Galway has an abundance of culture, food, cobblestone streets, and lough views to make up a tourist itinerary many times over.

This week it was announced too that Galway has received almost €70 million in funding to build a new pedestrian and cycle bridge across the Corrib as well as regeneration projects at Nuns Island in cooperation with NUI Galway and a riverside campus to regenerate the area.

It will feature an artistic performance space and an enhanced public area. But the most anticipated part of the investment in Galway is dedicated to Woodquay, the Cathedral Plaza, and Fishmarket Square.

The iconic McSwiggans, a stalwart of Galway life, continues to be the culinary Mecca showcasing the best of Ireland’s Western fare against the backdrop of its most vibrant quarter

The funding comes at a time when there is a huge culinary and entertainment focus on Woodquay. From traditional Hugh’s bar, the buzzy vibes from McGuinn’s Hop House, Caribou, and the trendy refit of the Hole in the Wall, it’s become the place to gather preCovid times, and will no doubt be the spot where we all rediscover our social lives in the coming months.

The iconic McSwiggans, a stalwart of Galway life, continues to be the culinary Mecca showcasing the best of Ireland’s Western fare against the backdrop of its most vibrant quarter (plus, the steak is to die for).

It’s worth remembering that Woodquay was so-called because of the 150 feet wooden quay that ran the length of it, a second docks for the city. After the Corrib drainage scheme caused the land to be reclaimed, the land-meets-sea-vibe is what’s made this part so special.

Throughout its history, this area always had a plethora of pubs and family businesses, a marketplace buzz that can be compared to SOHO in London or NYC’s East Village.

It’s a reflection of its inhabitants, the unique people of Galway, the artists, the dreamers… and that’s why it was voted number one in the Condé Nast poll.

Don’t fancy Dublin Airport this summer? Here are 9 of the best beaches in Ireland (and the places to stay nearby)

The Great Getaway: The best things to see and do around Galway this Easter