Think hearty meaty goulash, but with a refined twist, an abundance of paprika, saffron and foie gras around every foodie corner. Amanda Cassidy was far from hungry in Hungary as she feasted her way through elaborate and well-considered menus in the city known as the ‘Paris of the East’.

Admittedly, I didn’t know much about Budapest when I set out. It’s rare that I travel anywhere without a great deal of research, but this trip wasn’t your usual city break. We were heading over for the Hungarian Grand Prix – the pinnacle of motorsport, Formula 1 at its finest.

Along the way, we’d heard that the Hungarian gastronomy scene was on the up, so between races, we explored many of the colourful markets, internationally recognised restaurants, honest street food and lively cafes across both Buda (one side of the River Danube) and Pest (the other).

Related: Under-the-radar places to travel to this summer 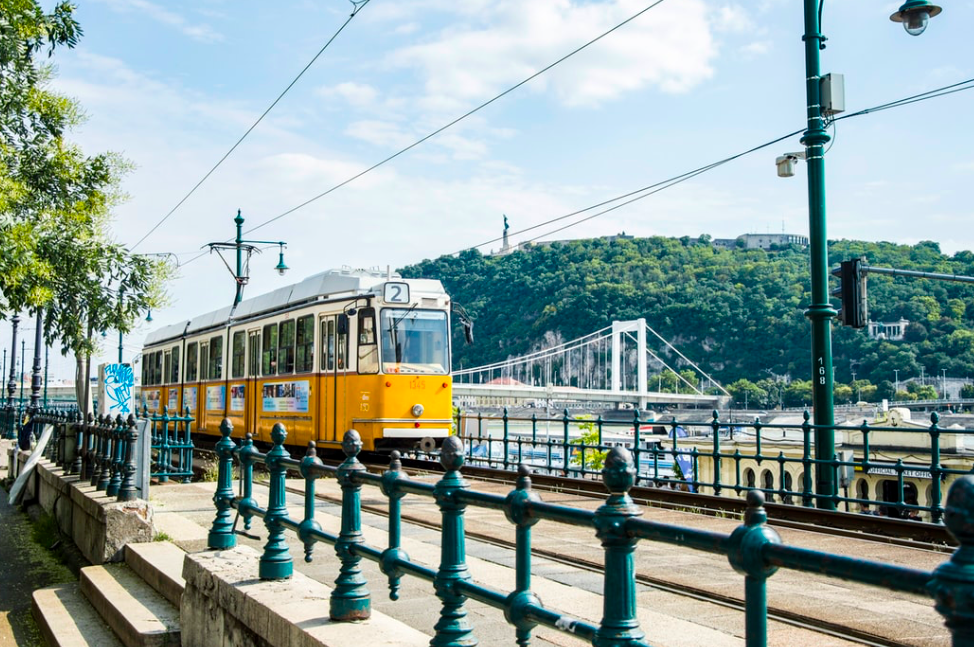 Our first discovery was the amazing pop-up bar scene. You will find these bars, known as ‘ruins’ down secret passageways, in dilapidated buildings, bursting with shabby chic charm. They are chaotic and eccentric and are very much a part of Budapest’s social scene. The first (and arguably most famous) ruin bar is called Szimpla which opened in what was once the Jewish ghetto. It was a small bar opened in an abandoned building offering affordable drinks to a bohemian hub.

The movement towards recycling alternative spaces for sociability exploded. Other ruin bars opened and slowly became a key part of the city’s social scene. They drew in crowds of locals as well as tourists. Places like Instant and Fogas Haz gained traction and now welcome thousands of visitors every year.

The other must-do in Budapest (between meals, of course) is a dip in the city’s thermal baths. In fact, some Hungarian doctors still recommend thermal water treatment to their patients. The city’s baths originally thought up during the Ottoman Empire, underwent a revival in the twentieth century. The one we visited was the Szechenyi thermal baths in the heart of City Park (Varosliget). Outside it looks more like a baroque palace but inside there are nods to Art Nouveau style. We sat back in the 35-degree water admiring the mosaics and relaxing our exhausted legs after a day tramping around the Hungaroring.

(Admission costs about €6.50 per person, the baths are usually co-ed and swimwear is mandatory!) 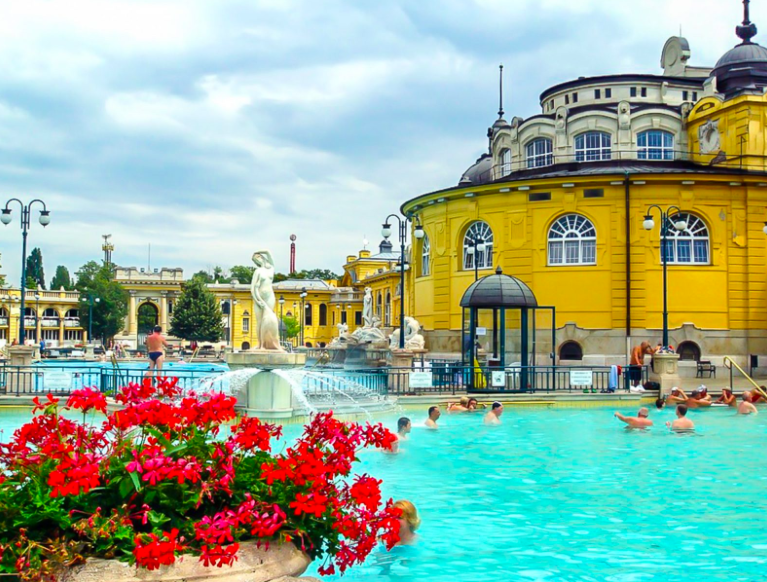 But the food scene is what really puts this city on the map in my mind. There is a lot of meat, but it is prepared in such different ways, it doesn’t seem too heavy. Expect to try Kolbász (sausages), Langos (a popular street food consisting of warm flatbread served with cheese, garlic and sour cream) and Tokflzelék (a light vegetable dish seasoned with dill and served with sour cream).

If you enjoy a drink, the Hungarian wines should also be an essential part of this dining experience.

We started at the Great Market Hall – a colourful, elaborate indoor market where we walked past stalls and stalls with bundles of garlic, dried red chillies and mountains of vibrant vegetables alongside strings of sausages and pretty displays of chocolate. It is busy and hot, and you elbow your way into the longest queues up to get your meal of typical Hungarian fare; bread bowls of tender goulash, the Langos flatbreads we mentioned, cones packed to the brim with sausages, all served with a frothy lemonade or Frappe (sweet wine mixed with fruit juice).

Portions are mesmerizingly huge, space is limited, but it is delicious Hungarian street food at its finest. 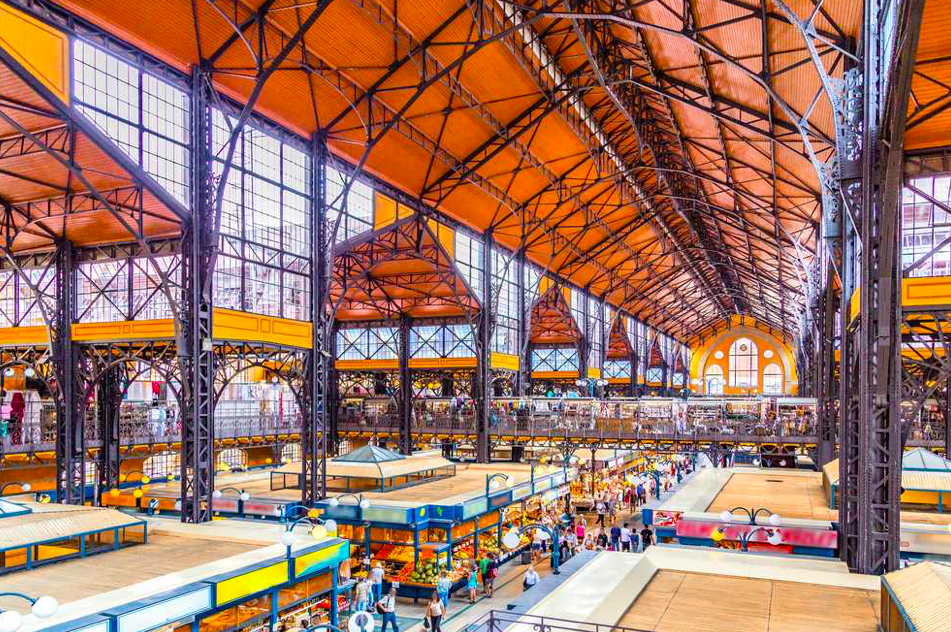 A year ago, Budapest hosted the Michelin Gala, one of the most prestigious gastronomic events in the world. There it was announced that its prestigious Onyx restaurant had earned its second Michelin star. The restaurant is situated in Pest by Vorösmarty Square, next to the famous Gerbeaud Cafe.

The chef there is Ádám Mészáros, who serves dishes like water buffalo steak tartar with oxtail, oysters and mushroom carpaccio or a free-range egg served with potato foam, Mangalica pork and truffles.

We went to Barosso, a tiny, romantic bistro in a side street near the chain bridge with an outdoor terrace and fairy lights. I had the creamiest St. Marcellin cheese with fruit to start and melt-in-your-mouth beef cheek bourguignon with vegetable tarhonya.

My dining partner went for the scallops with raspberries and the rabbit paprika stew with dumpling brulée (it had been recommended by our waitress). We finished with an apricot sponge cake made with cottage cheese – a speciality of the area and some sweet Hungarian dessert wine, Tokaji Aszú 2008. 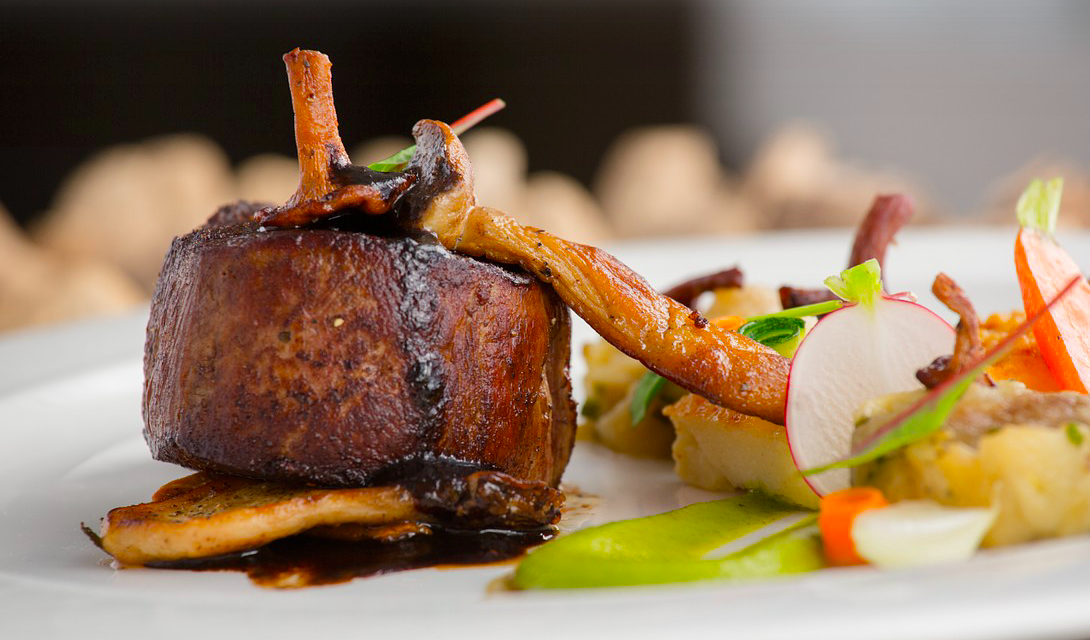 Another evening we ventured across to Buda to a stunning restaurant called Zona. The service was impeccable, prices reasonable and food glorious. We sat outside admiring the river lights feasting on veal tenderloin, foie gras and dill paprika sauce with king prawn, fennel, couscous tabbouleh, mango hollandaise foam, the deeply soulful sounds from the live music within the restaurant drifting out gently as we ate.

I love it when things under-promise and over-deliver. The weekend in Budapest was just that – a dining delight that we completely underestimated.

This is a city that wowed and winked as pretty as the lights floating down the Danube. Definitely worth a visit in 2020.

Read more: A life-changing experience on the Camino

Read more: All I wish I’d known before going to Universal Orlando

Read more: What its like bringing the kids to the Maldives