The world devoured the TV adaptation of ‘Normal People’, and we’ve been patiently waiting for Sally Rooney’s next project to debut ever since. The good news? 'Conversations With Friends' will hit BBC Three and Hulu this Sunday with an RTÉ release soon to follow.

Word that filming for Conversations With Friends had gotten underway slipped out back in April last year when the series’ official Twitter account shared a photo of a clapperboard alongside the words, “it’s day 1 of filming #ConversationswithFriends in Northern Ireland! We’re so excited to bring this world to life.”

If they’re excited to bring it to life, then we’re doubly excited for them to do so as there’s been a Sally Rooney-shaped hole in our lives since Connell and Marianne left our screens and we’re keen to fill it as soon as possible. That void was temporarily filled by the release of her third novel, Beautiful World, Where Are You, but we finished that in one day… so it was short-lived, to say the least.

For those of you who have held off reading the book (for whatever reason), Conversations With Friends is the Sligo native’s first novel. Set in Dublin, the plot centres on two college students, Frances and Bobbi, who find themselves unexpectedly entangled with an older married couple, Nick and Melissa. Frances, the narrator, is a 21-year-old writer and poet.

Where she is quiet and reserved, her best friend (and former lover) Bobbi, is outspoken and self-assured. They clash, but it works somehow.

Another coming-of-age story where relationships – romantic and otherwise – become blurred and broken, it tells of infidelity, intimacy and the at-times crippling pain that comes with having loved and lost.

Seeing that there was a huge appetite for all things Sally Rooney, Hulu immediately picked up the author’s first novel for the silver screen and it wasn’t long before we had a cast, release date and now, an extended trailer and first-look photos too.

As with Normal People, Oscar-nominated Irish film director Lenny Abrahamson was brought on board for the project. He worked closely alongside Rooney herself, who previously commented that she was “so pleased” to be involved in the production of the series. “I’m confident we’re going to find fresh and interesting ways of dramatising the novel’s dynamics, and I’m excited to watch the process take shape,” Sally said of the collaboration.

Abrahamson also said he was thrilled to be involved, praising Sally and her source material in particular: “I love Conversations With Friends, its depth, humour and freshness, and it’s an honour to be involved in bringing it to the screen. I’m particularly happy that my connection to Sally and her work is set to continue,” he added.

Alice Birch will return to write a number of episodes following her work on Normal People. 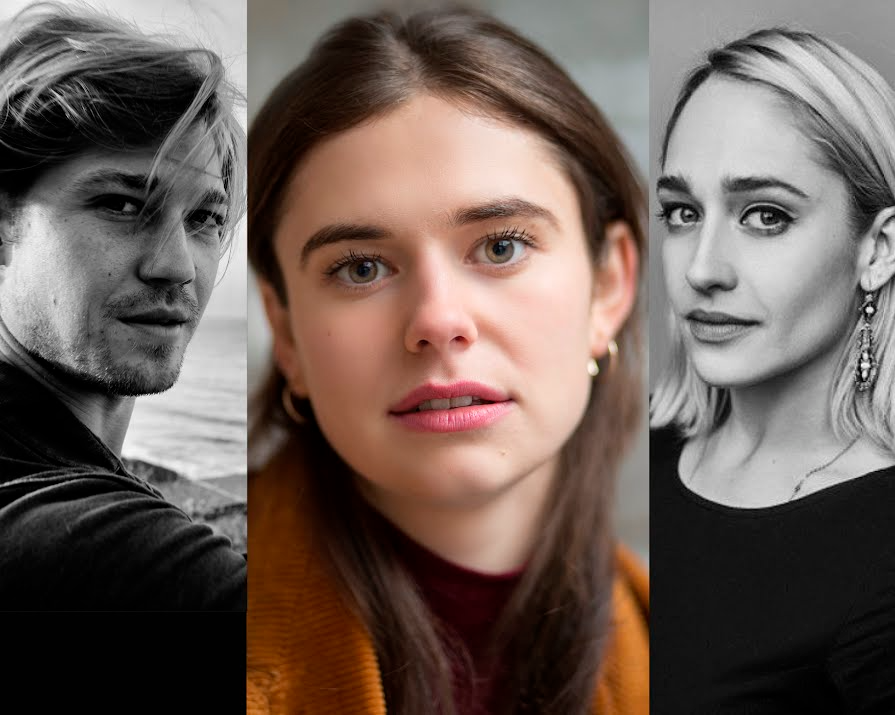 Cast announcements were made around this time last year, with emerging talent Alison Oliver set to play Frances. Hailing from Cork, she shares a surprising connection to Normal People star Paul Mescal, and coincidentally trained at the same acting school as him. American actress Sasha Lane will play Bobbi.

While two relative newcomers were chosen for the central characters, production opted for more established names for the older couple, casting Joe Alwyn from The Favourite (and yes, T. Swift’s boyfriend) as the bored yet charming Nick, and Jemima Kirke from Girls and Sex Education as Melissa.

But they were all really, really well cast according to Kirke. “What became more and more apparent the more we shot was that we were all really well cast – it was almost like there was some sort of conspiracy that we weren’t aware of, and suddenly we found ourselves in, like, a Hitchcock movie in a room all together,” she told Vanity Fair. “It was almost like [the casting directors] had a sense of humour, or they just weren’t telling us everything. There was an essential piece about each of us as people that were shared with the character.”

Commenting that the making of Normal People “unlocked the proper way of adapting Conversations With Friends”, Element Pictures co-founder, Ed Guiney, said that the story was “better told in a longer form that allows you properly live with the characters and their choices”.

Ranging from group shots of the core four, to an intimate portrait of Nick and Frances in a car and one of Bobbi and Melissa having a drink, the images really help to paint a picture of what viewers can expect from the series. Everything from the costumes, to the lighting to the body language tells a story… and we’re sold hook, line and sinker.

Very much hoping that lightning will strike twice, the new series differentiates itself from Normal People which played out as “an intimate romantic drama”, by revelling in the messy dynamics between four complicated characters. “What we’ve ended up with is something that has a kind of aesthetic family resemblance to the other series, but is definitely its own thing,” Abrahamson agreed.

Of course there are expectations, but the team has stayed focused on making the show the best it can be… international success would be a bonus.

Last month, producers baited us in yet again with an extended trailer for the series. Set to an original track by Phoebe Bridgers, the two-minute whirlwind has given us more than enough to get excited about and we’re currently counting down the days until its RTÉ release date on Wednesday, 18 May.

Taking the form of a 12-part series, the TV adaptation is set to air on BBC Three and Hulu on 15 May 2022, with an RTÉ release date to follow on Wednesday 18 May.

Photography by Enda Bowe for Hulu.

This stylish Victorian Rathmines home is on the market for €1.95 million

Inside this unique woodland home in Cork on the market for €750,000