It takes great bravery to do something completely different; enormous guts, both on the part of the architect and the client. But when you do take that risk and hold your nerve, it can pay off in spades. Joseph Kearney had passed by the triangular patch of waste ground for years, on his way to and from his own Victorian home. Then, following a life-changing period – the death of his wife, and the decision to take early retirement – he bought the site in 2004 and started to dream. “It was a time when everything was up in the air,” he says. “You don’t know where the pieces are going to fall, but you have to grasp the opportunities.” 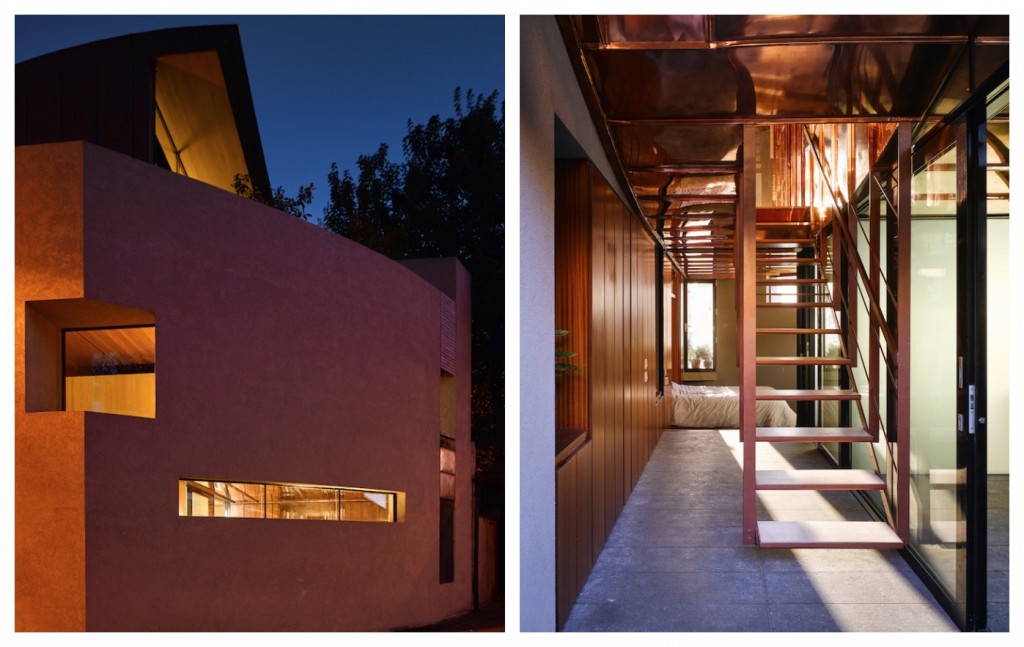 Now, thanks to an excellent creative relationship with architect Tom Maher, and strong input from his son, Alex, Joseph revels in a house of magical light effects, where even something as simple as having your morning coffee becomes a wonderful moment. Although neither Joseph nor Alex have a background in design – Joseph worked for Telecom Éireann before his retirement – they are both quite creative. Nevertheless, it was a very long process. Initial drawings had been submitted, and planning permission approved, but then the original architect had become too busy, so it was back to the drawing board. “Tom was a recommendation,” remembers Joseph. “And when he showed me his ideas, and said he wanted to use the same material – copper – inside and out, I thought he was joking, or softening me up for something else.” 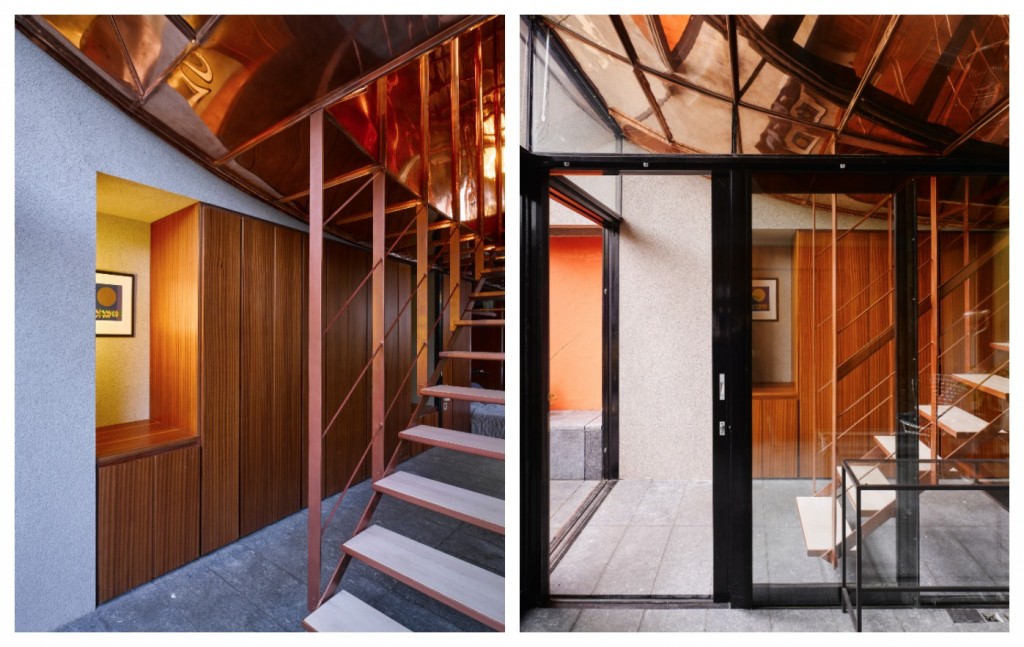 But Tom, who had spent a number of years working in an office with a view of the copper dome of Rathmines church, was completely serious. And he was right. Inside, the copper ceilings on the ground floor reflect light, which is also cleverly bounced off windows and mirrors, giving glorious plays of gold all day long, all year round. “Lie in bed,” Joseph tells me, “and you can see the reflections of people and pigeons outside.” 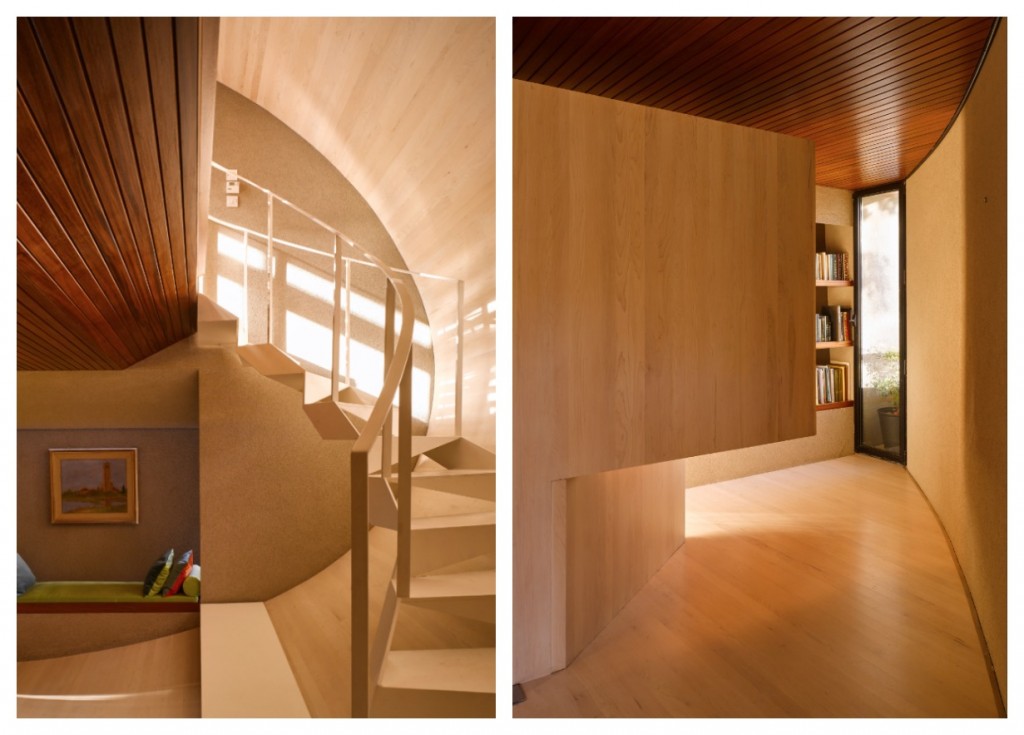 Downstairs there are two bedrooms, “we use one in winter and one in summer,” says Joseph, showing how one is bright and airy at the front, opening via French windows to the patio; while the other is a cosier nest. In each, the bed can be flipped up into a recess in the wall – James Bond style – to create a multi-functional space. In the summer room, the windows can slide back to create a garden room with ease. Tom worked closely with Joseph and Alex to design the furniture: the beds, storage and kitchen units, and the pair of bathrooms, that cleverly, like a yacht’s head, are miracles of space-saving features – such as the slatted floors that lift up to reveal baths.

Was Joseph the dream client, I wonder? “We had our differences of opinion,” says Tom, with a smile. “But they were always creative. You might meet a client and they’d say ‘no way’ when you’d suggest something, but Joe and Alex would go off and have a think about it. You can’t ask for more.” 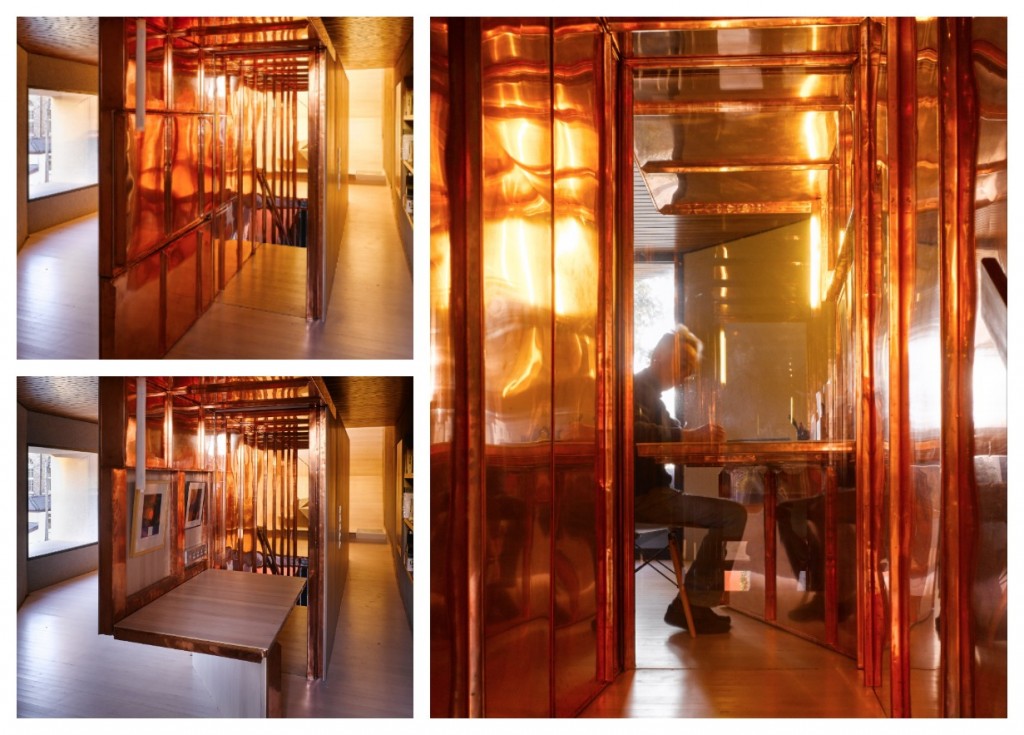 “The whole build took about ten years,” says Joseph. “But I knew I had to carry on. There were times when I did wonder what would happen if I gave up and bought an apartment?” he pauses at the thought. But he was in good hands, as Tom kept the project on track. Having studied at UCD, Tom set up Bates Maher, with Kevin Bates, who is now a director of Scott Tallon Walker. The practice was awarded Ireland’s highest architectural accolade, the RIAI Gold Medal, in 2013 for Poustinia, the retreat centre in Co. Tipperary. The pavilions of the centre show the same attention to material, detail, and the unique atmospheres that successful architecture can create, as does Tom’s house for Joseph.

We move up to the top floor kitchen for tea and cake, and I’m completely beguiled by the view of the copper dome of the church. “After living in a period house, it took a while to find the measure of the space,” he adds. “But living here has been wonderful. I was always attracted to Modernism, growing up.” Artist Patrick Scott was a family friend, and Scott’s works dot the walls. “It’s every generation’s chance not to repeat the past,” he adds. “You’re not expecting clients to change their lives,” says Tom. “But you might open up ideas of living in a different way.” And that’s how you make a new future.

This Rathgar home with a stylish garden studio is on the market for €1.85 million