An Irish-Canadian and their 1965 Airstream restoration that’s an artistic ode to the era.

“I rang animal services and explained that I’d just gotten this camper van to refurbish and found it full of animals: rats, mice, possums – a big possum. They asked, ‘Are they in your workshop? They are? Well then, that’s not our problem. Good luck though!’”

So began Eoin Murphy and Robin Grundy-Murphy’s 13-month overhaul of a 1965 Airstream Overlander in their Toronto workshop, their last North American project before they returned to Ireland in the summer of 2018 to set up Borien Studio. 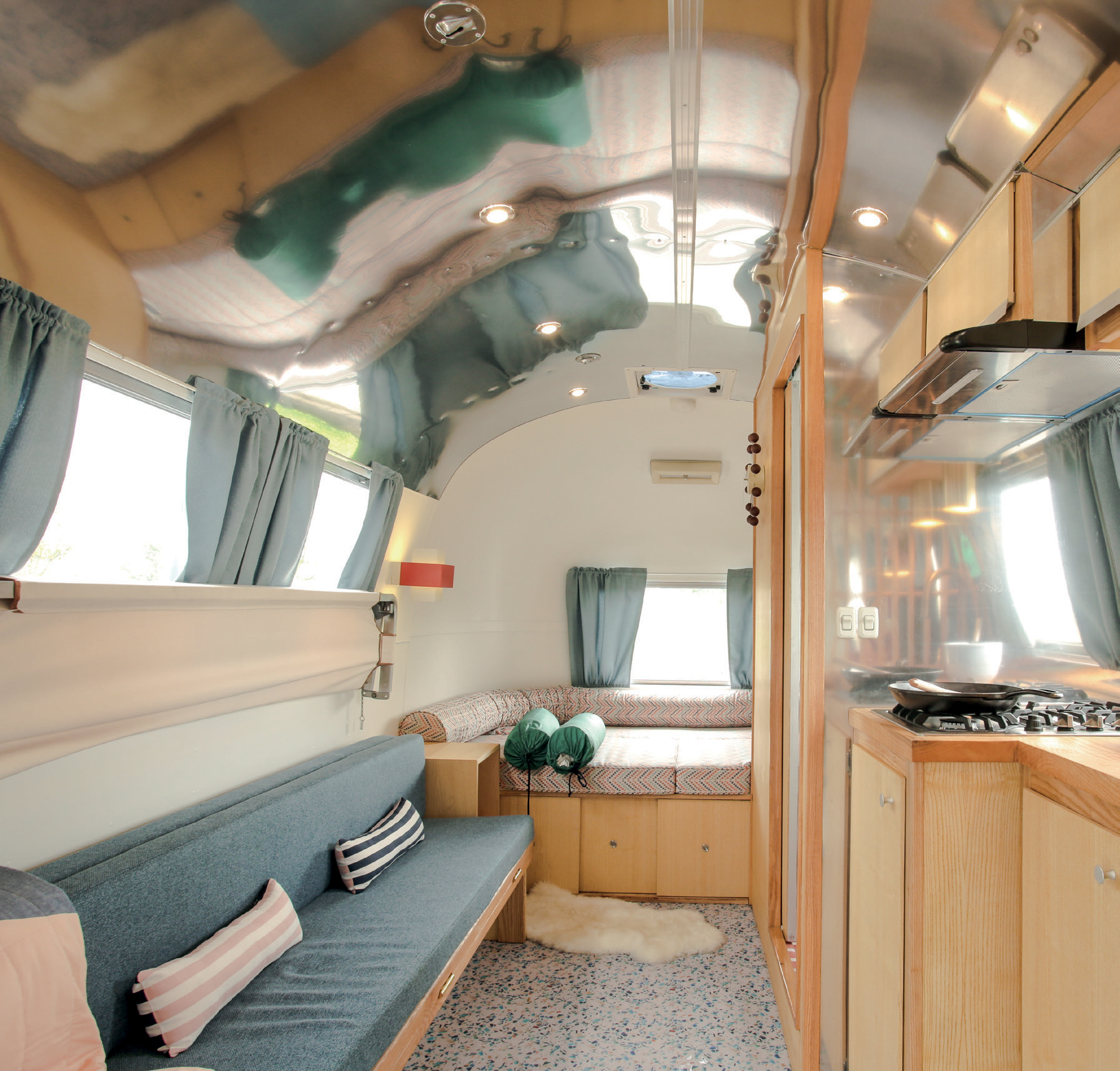 It belonged to an American man Eoin had met while doing an art installation with his friend Maser in Fayetteville. He asked if Eoin and Robin would be up for taking on his Airstream. “Over five years or so, he asked us many times to restore it in Arkansas,” explains Eoin, but the couple lived in Toronto. “Eventually he said he’d send it wherever we wanted it, and we could take as long as we want with it. It was a dream project to be handed.”

However, the first few weeks weren’t quite dreamlike, as they set about removing “50 or 60 wild animals beds” that had lived in the camper during its long sojourn. Robin quickly interjects, “When he says ‘we’ he means ‘I’ because as soon as something moved in there, I was out the door.”

After dealing with the possums, they slowly stripped everything back to begin the Airstream restoration. “A lot of people would have torn everything out”, says Eoin “but we meticulously cleaned each bit and saved everything we could, from old hinges to brackets for the original bunk beds, and all of the badges.” 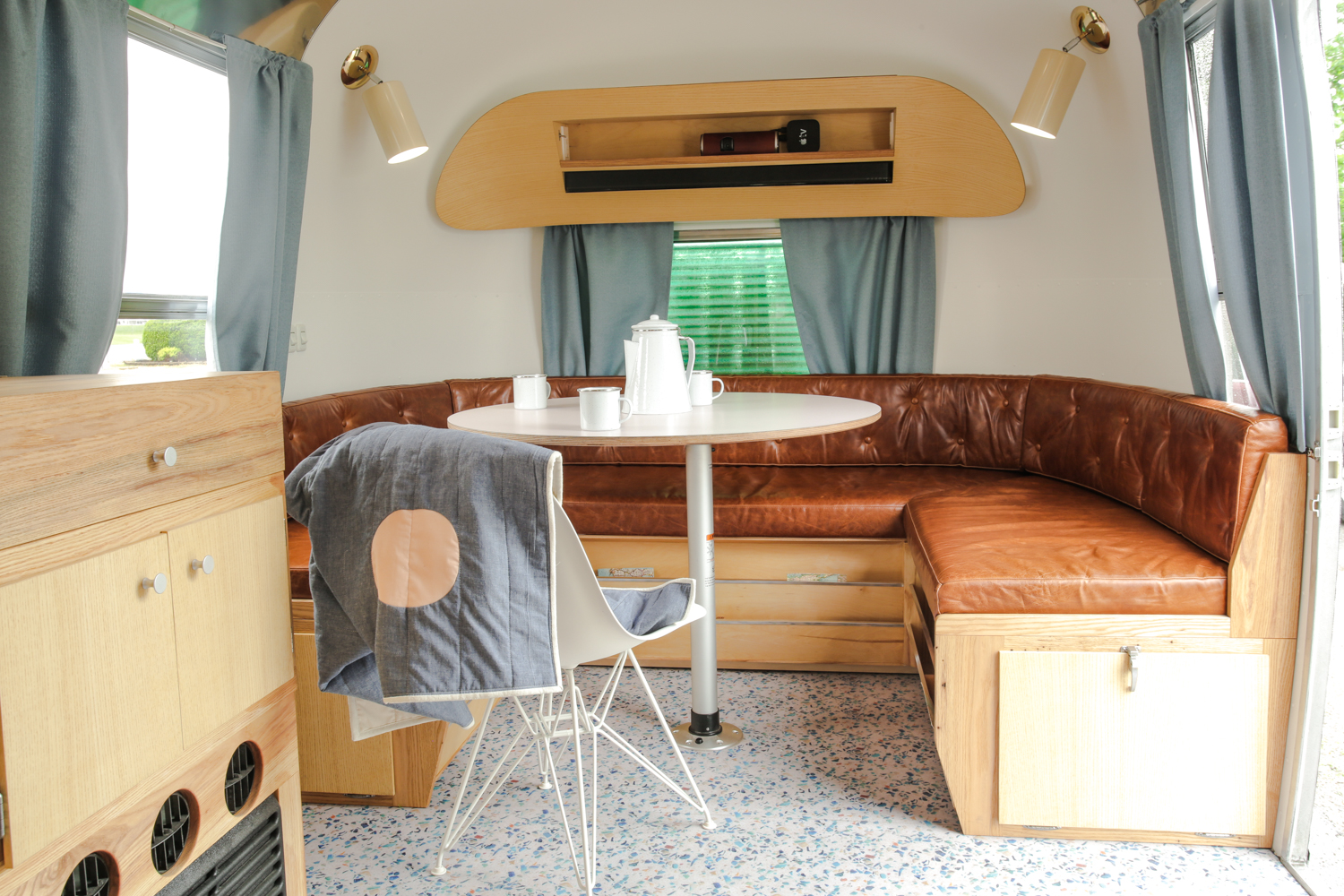 Once it was cleared out, the space began to take shape in their minds. With such a dedicated community around Airstreams, they felt both a responsibility to honour it, but also saw an opportunity to do something outside the box. Except, this wasn’t a box. In fact, there are no straight lines at all, which meant that every single measurement had to be based off the floor.  “We could have done it super authentic, but we wanted it to have modern luxuries too, like the shower and the sound system,” explains Robin.

The idea was to create a luxury, communal space, so the back has a day bed area; a sofa and bunk sit by the ash kitchen and then a “bar/schmooze area,” as Robin calls it, next to the dining table, where a bar flips up for entertaining.

Their first task was to remove the Airstream’s inner skin, which makes the already lightweight frame made from aeroplane aluminium very pliable, so Eoin could get to work. They wanted the camper to have everything necessary to go off the grid, adding solar panels, an inverter, a composting toilet, moving the batteries and having a new water tank reshaped to fit in the chassis. 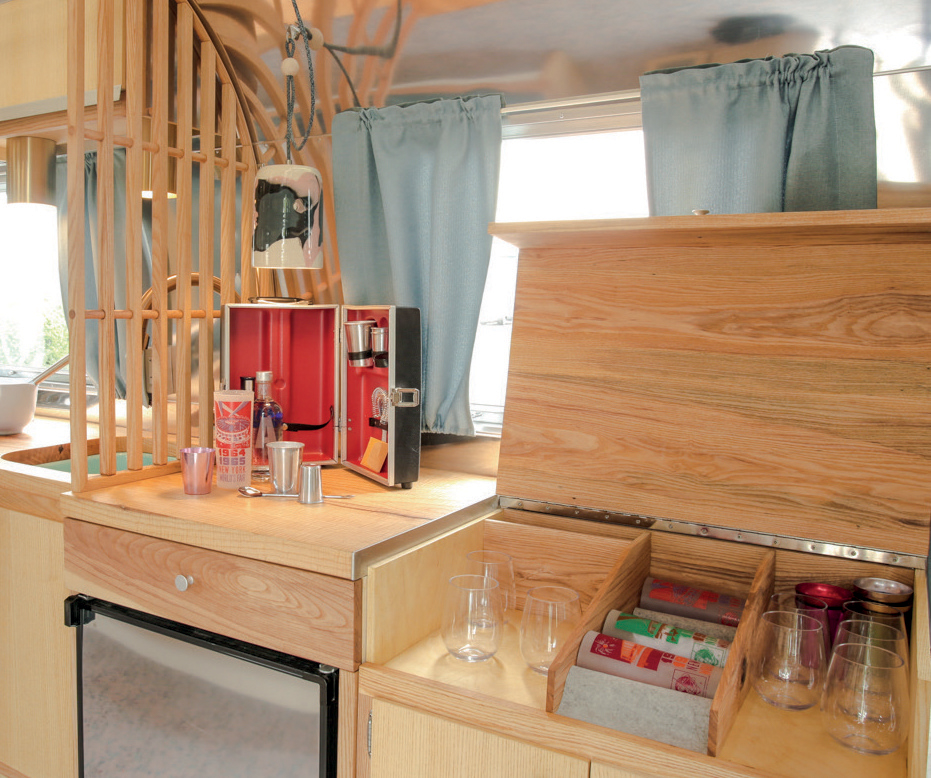 Next were the electrics, with Eoin figuring out the logistics and working out different draws. “It’s like building a house and a car,” he emphasises. When all the inner skin of the Airstream had been replaced, it was Robin’s turn. “I felt bad, because all the work Eoin did – the grinding and stripping and the chemicals and the wiring – that’s all thankless and invisible. And it’s the part that took the most time. I just iced it.” But the icing was no easy feat either.

Aside from having to modify just about everything, such an open-ended brief was both a luxury and a hindrance. “People don’t usually say you can do whatever you want, so you have to figure out, well what do I want?” Robin points out.

The design eventually came down to two orange wall sconces that Robin spotted on Ebay from Denmark. “I just fell in love and then everything started to click off them. I found a fabric and then this area came together and then the floor and my brain started seeing it all together.” 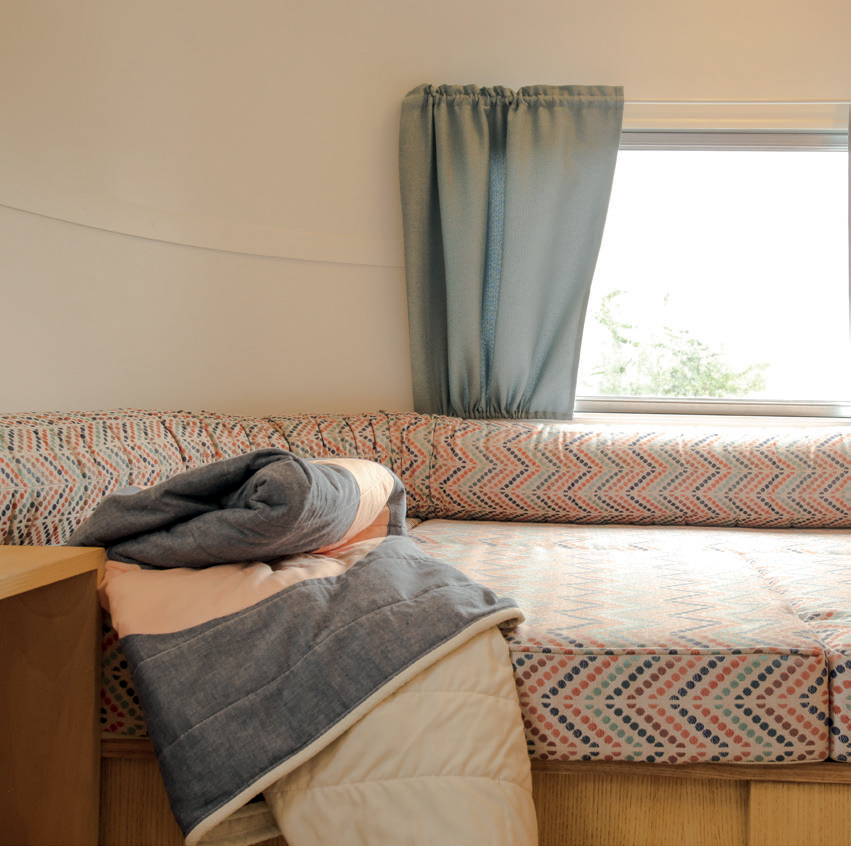 With so many considerations, it would have been easy to take the utilitarian option, as many Airstream owners have done, but this camper has plenty of luxury packed into its 14 square metres. The bathroom floor is made of a single piece of maple that they had dyed pink with an Alexander Girard-esque pattern on top, “a little nod to the 1960s,” and Robin sourced flecked Melmac tableware and a cocktail glass set from the 1965 World Fair in its original packaging. In the dining area, a seamless leather sofa swings around one end of the Airstream. “I think three full cows went into that,” Eoin says, “But the client owns a beef ranch so we knew he’d notice a seam.”

Now back in Ireland, they’ve set up shop in Co Wexford where they’ve established their design studio, Borien. Current projects include a built-in timber sofa for an architect and a working-from-home pod for a small back garden, known as the WFH Pocket. “We had the idea after speaking with many friends and colleagues who are trying to make due in the city Center with a two-up, two-down layout and zero room for a home office. One friend is an architect working on a changing table,” explains Robin.

From tackling feral possums to creating high-end experiential design pieces, we have yet to see what this duo can’t do.

Read more: Is the garden home office the future of working from home?

Read more: This ingenious home in The Liberties is full of small space ideas

A vegetarian chef on her favourite meat-free Christmas recipes

Vegan and cheap as chips: A recipe for artichoke paella

Deliciously Ella’s tips for kicking off a plant-based diet