In the fourth of our IMAGE x Dyson Self-Build Ireland series, we meet Fiona and Michael McGeogh, who have taken on the mammoth task of building their own dream home in Co Mayo.

Self-builds have surged in popularity in recent years. A complete labour of love, the payoff of seeing your dream home come together cannot be underestimated… but it’s not something people take on lightly.

Often a long and arduous process, there are several different factors to take into consideration before heading down the path of building your own home.

Fiona and Michael McGeough (and their three children, Jack, Paddy and Maggie) are currently in the midst of building their own dream home. Deciding to keep it local, they’ve chosen a family site in Co Mayo – close to where they’re both from. Fiona works with the Self-Build and Renovations Ireland Facebook group, while Michael is a maintenance electrician. Below, they share their secrets on everything from budgeting to timing to what they wish they knew starting out. 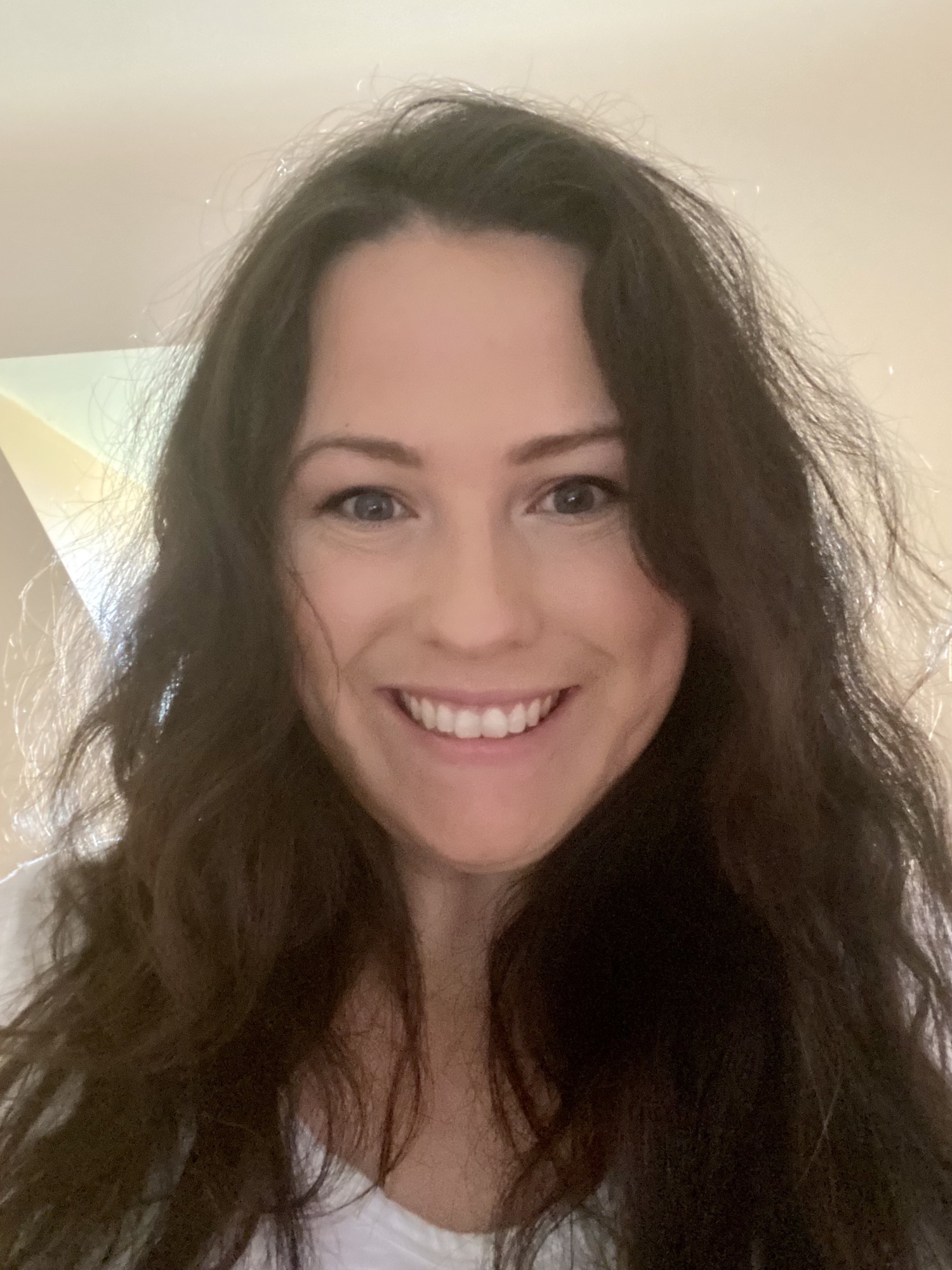 What was the land/building/space like when you first got your hands on it?
We were lucky enough to have the opportunity to build on a family site. With several sites to choose from, I think some people may have thought we were a bit mad at first when we chose this particular site as it’s very remote, but that’s exactly what we loved about it. You can see for miles, with lake views to the front and mountain views to the rear.

As the site is elevated and at the foot of a mountain, our engineer advised us to build a bungalow, so we wouldn’t interfere with sight lines. Given the location of the site, its lack of neighbouring houses and a water connection, he also advised that we first make a pre-planning enquiry. This is where you seek the advice from the planning authority before actually applying for planning permission. It involved us sending a site location map to the planning authority. They will in turn visit the site and respond with any observations they might have.

When did you start the project?
We were granted planning permission in October 2020 and we’ve been building ever since! 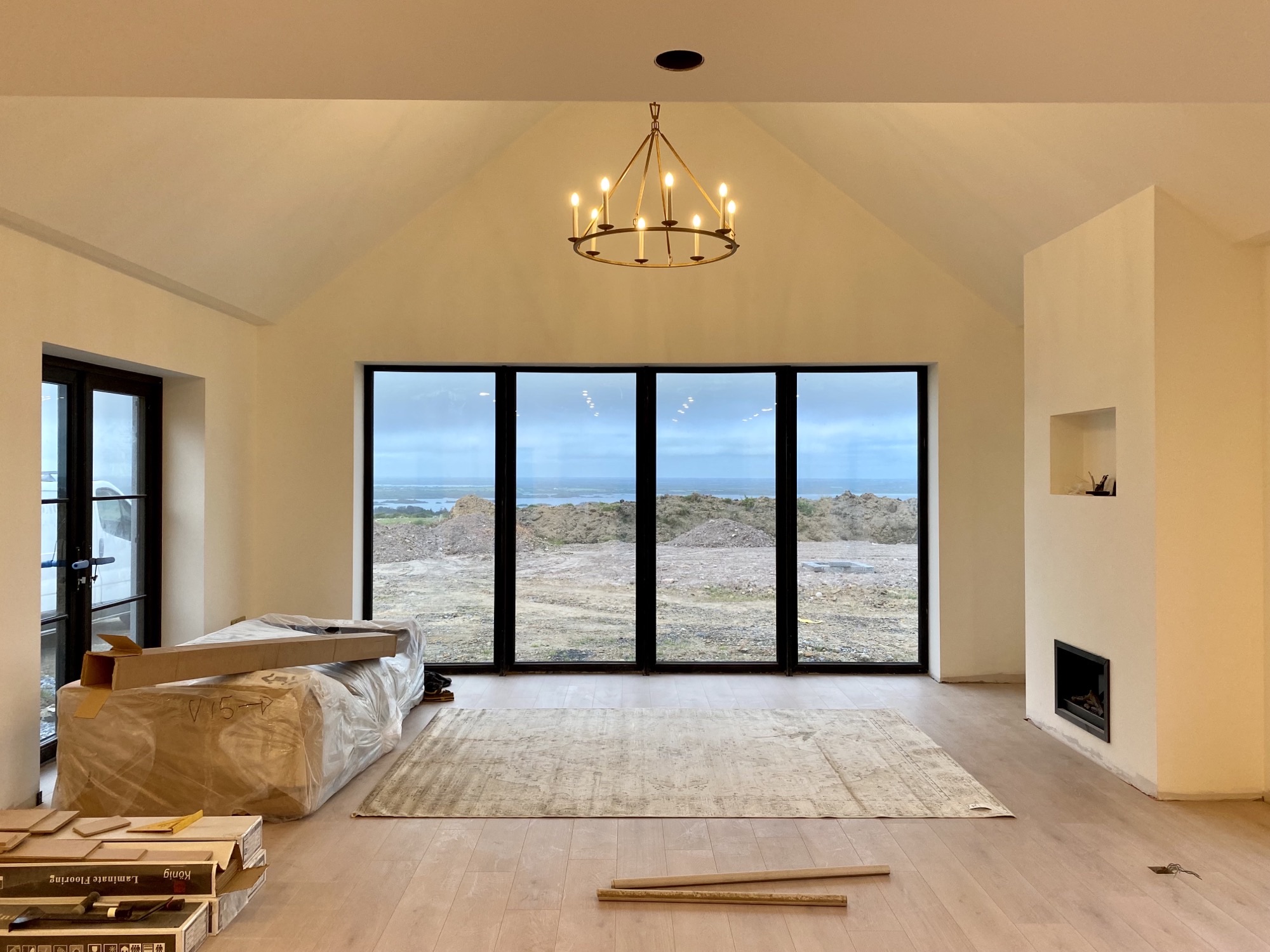 Has it stayed on timeline/budget?
No and no! As it’s a direct labour self-build project and we’re doing a lot of the work ourselves, we never really set a “move in date”, but I certainly thought we would be in by now! We had no major delays, but trying to balance work and family life while self-building isn’t for the faint hearted. You just have to do what you can, whenever you can.

Regarding budget, I think I definitely came into this self-build naive about budget. Like most people who build,  I had a “magic number” in my head of how much I thought it would cost to build a home and boy was I way off! Fortunately for us, a family member who had just completed a self-build created a Bill of Quantities for us before we had even secured a mortgage. This gave us a much more realistic idea of how much it would cost to build our dream home before we broke ground. I can’t imagine how stressful it would have been if we had to figure out the actual cost as we went along. Once you’re mentally prepared and you have the time to get your head around the budget, it makes it much easier to make some of those sacrifices to stay within budget.

We’ll probably run slightly over budget (less than 10 per cent), but this is mainly down to certain decisions which were within our control. For example, we had initially budgeted for fibre cement roof tiles, but opted for natural slate instead. We managed to avoid most of the material price increases by ordering items in advance.

Did you stick with the original plan, or did it evolve as you progressed?
Structurally, we very much stuck to the original plans. It’s a very simple H-Shaped design, with the living area on one side of the house and the bedrooms on the other. We really took the time when designing the house to think about how we live our lives as a family, how we carry out everyday tasks. We took into consideration all the things that worked in our current home and applied it to the design. We then took a look at all the things that don’t work and figured out how we could improve them and incorporate that into the design. I think practicality and functionality are the backbone of good design. We haven’t moved in yet, but I hope this is something we’ve achieved. 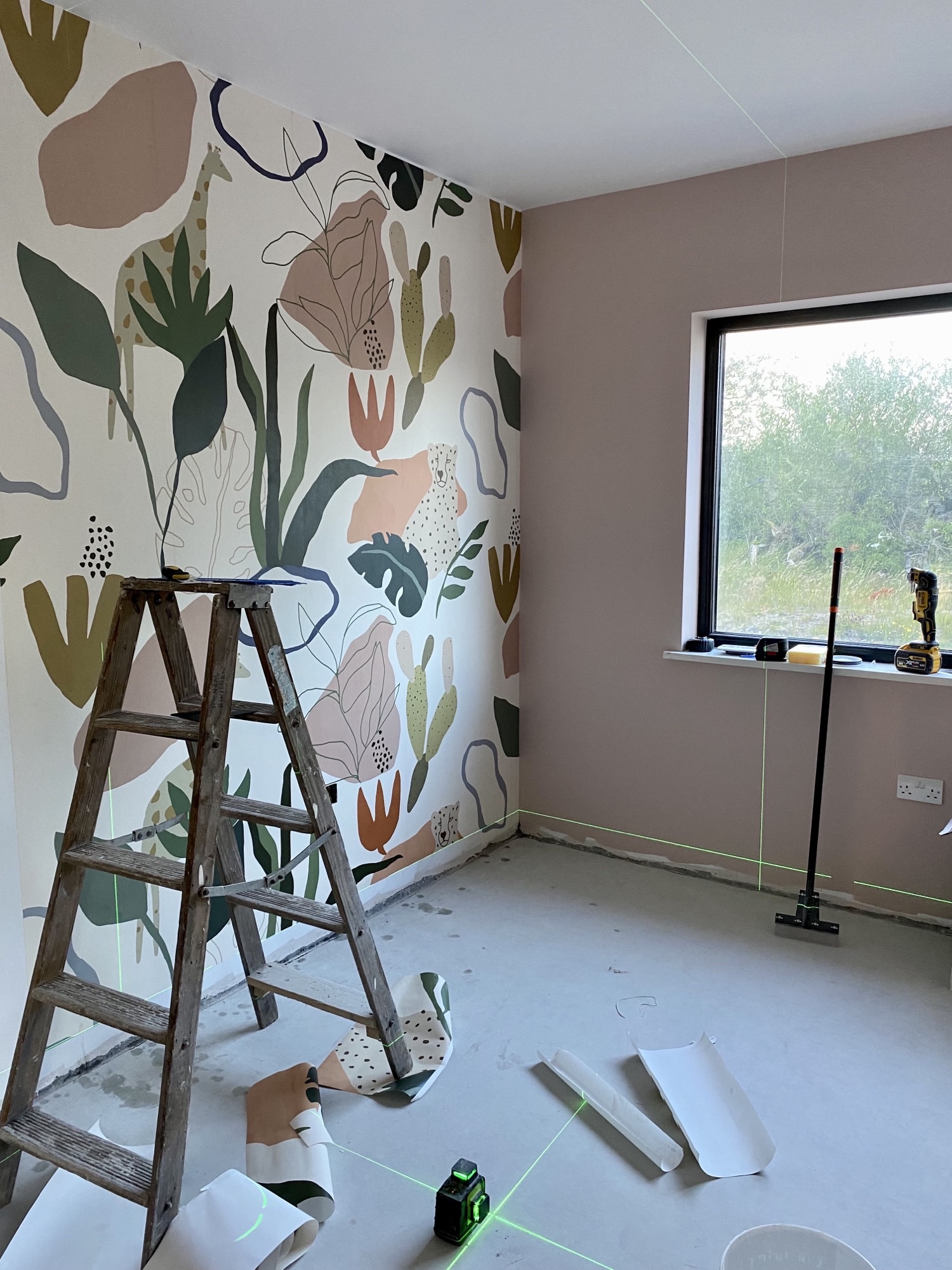 The interior design of the home however has changed and evolved from the original plan. I think with online influences such as Instagram and Pinterest, my interior taste will be ever changing. I’ve tried to keep the decor of the home quite classic and plan on adding personality with changeable pieces such as cushions, rugs or pieces of art, but have kept the bigger and more expensive pieces, for example the sofas, dining table, bed frame, relatively simple, so if I do feel like switching things up down the line, it won’t cost me a fortune.

What hurdles have you encountered along the way?
I think the biggest hurdle we’ve encountered is our site location. The logistics of getting larger items, for example our roof trusses to the site, has been challenging as the road that leads to the site is very narrow and winding. Even now, towards the end of our build, we’re still having difficulty getting items such as white goods delivered as the courier trucks are just too big and we end up having to make other arrangements for collection. That said, I still think it’s totally worth it!

What aspect of it have you enjoyed the most?
I think what I enjoy most about a direct labour self-build, is the complete control you have over the project. Although the countless decisions can be tiresome it gives you the opportunity to create your home exactly as you want it, as every decision you make has a knock on effect on the next. You have no choice but to really take the time to think things through and consider your options. It’s also extremely rewarding to look back and see how far you have come and how much you have achieved.

What do you now know about renovation/rebuilds that you wish you knew when you started?
I knew how much time and energy would go into building a home, however knowing something in advance is very different to actually experiencing it. I think the biggest surprise for me was realising how consuming a self-build is. It takes up a huge amount of space in your head. Even when you’re not building, you’re constantly thinking about it, constantly mulling over decisions that need to be made and people who need to be called. I look forward to the day that it’s not all I think about! 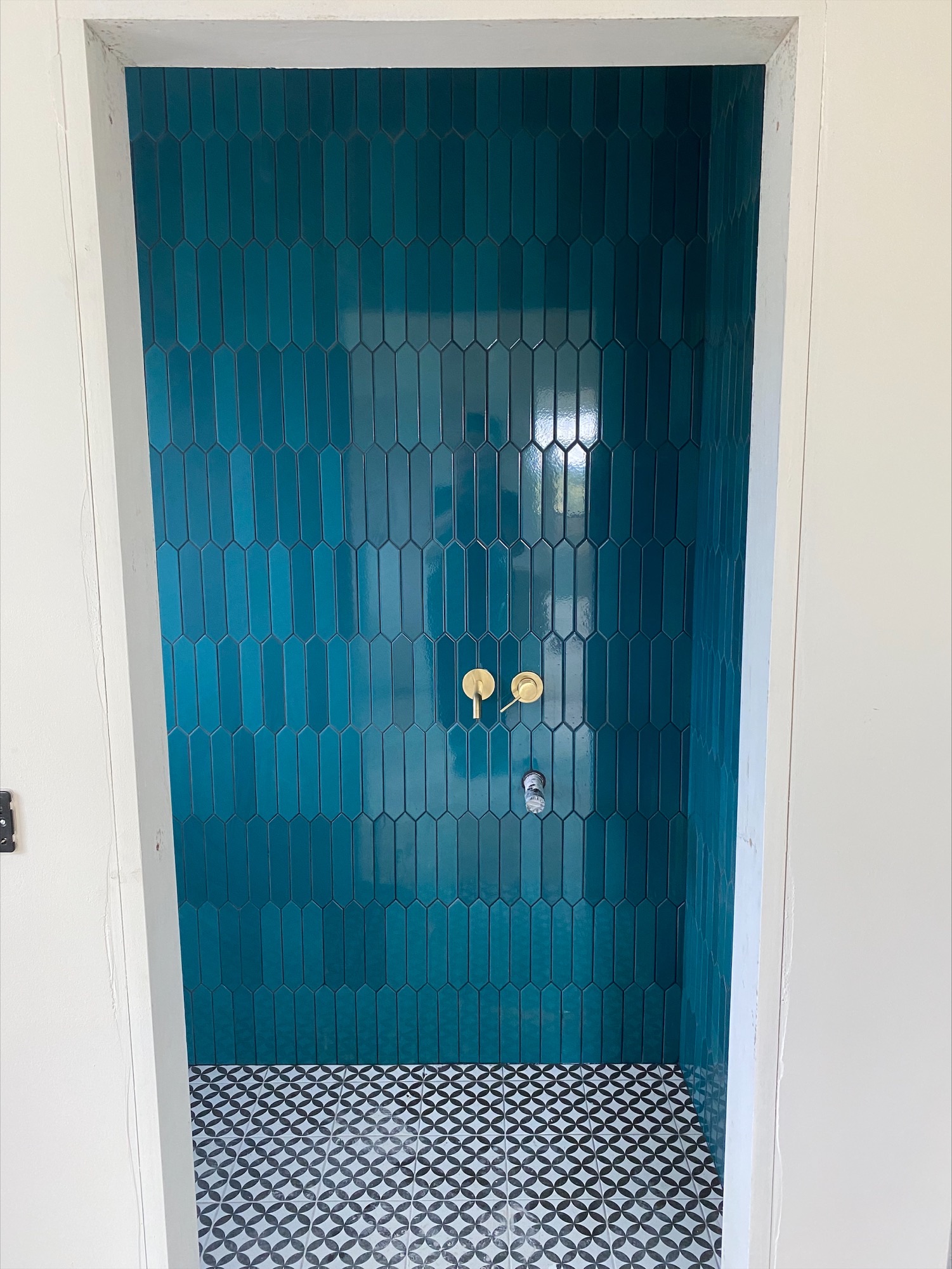 What questions do you wish you asked your builder/architect?
Believe me, I don’t think there’s any question I didn’t ask. That’s what they’re there for, to offer you their expertise. Most people have no experience in building, so there is no question too simple in my opinion. The more informed you are, the sounder the decision you’ll make.

What advice do you have for homeowners who are about to take on a self-build / renovation?
My first piece of advice would be to invest in getting a Bill of Quantities, particularly if you are going the direct labour route. It will be money well spent, especially given today’s current financial climate. Even having a ballpark figure of how much individual items will cost you and what quantities you will need of each, will allow you to shop around in advance and obtain the best quotes. A €100 saved here and there can quickly add up to thousands over the course of a self-build.

My second piece of advice is to really take the time to consider the design of your home. At the early stages of the build, when drawing up the plans of your house, listen to your architect’s/engineer’s advice, but if you feel something is not practical and it will not work for you and your family, don’t be afraid to speak up and address it. After all, it’s you who will be living there, not them. If it’s possible, chat to someone who has already gone down the self-build route and take their advice onboard, as they have experience and more importantly hindsight! Also, where you can, try and make your home future-proof. For example, living with a baby or toddler is very different to living with a teenager, so try and consider how your home may need to evolve later in life.

My final piece of advice would be, don’t sweat the small stuff or the big stuff. Those all consuming problems, big or small, that you might obsess over one day, will very quickly become a distant memory.

How did you save money along the way?
To be honest, the pandemic helped with this. We started building in October 2020, so we’ve built right through Covid. Hard and all as restricting our movements was, it also restricted our spending. There were no weddings, no holidays, no school/work runs; all this contributed to our savings. 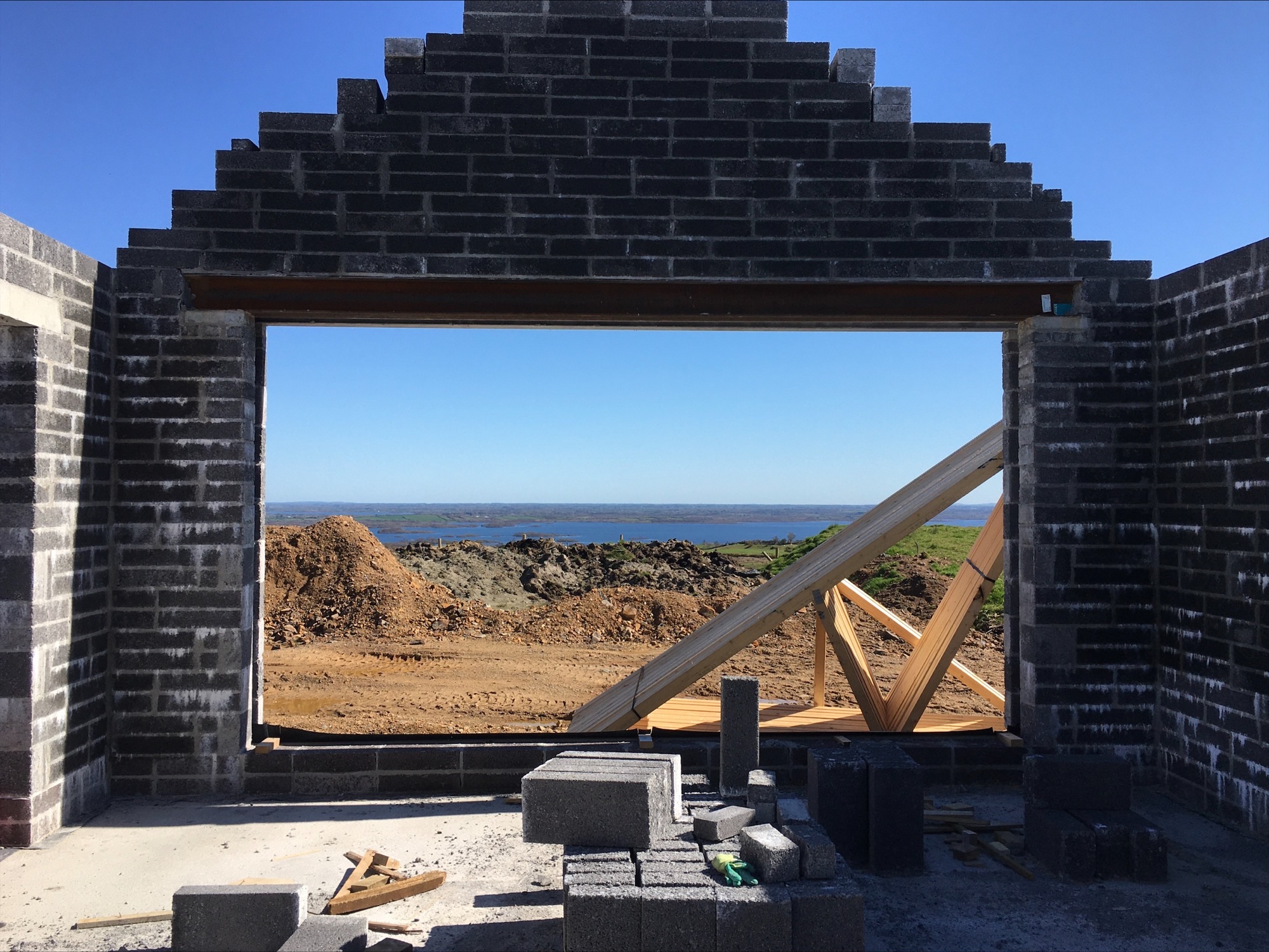 Did you seek finance? Was it difficult to acquire?
When we first started contemplating a self-build, we made an appointment with our bank to see if we were even eligible for a mortgage, and if not, what we needed to do to become eligible for one. This was a very casual meeting, no paperwork, just ourselves. It’s a great first step to take and really helps to get your head around the financial side of things. After our plans were drawn up and we had a rough idea of how much we needed to borrow from the bank, we returned for another appointment and were given mortgage approval in principle. Once we were granted planning permission and submitted all the necessary documentation to the bank, we were then offered a mortgage. It sounds straightforward, but like everything build-related, it does require a lot of time and patience.

Anything else you want to add/tell me about the project?
We’re building a 2700 sqft bungalow via direct labour in the west of Ireland with my husband and three children.

It takes bravery to follow your design dreams, particularly when those dreams require thinking outside the box. Dyson is, and has always been, a champion of design innovation and creative bravery. In this series IMAGE x DYSON salute Ireland’s brave self-builders who are making their design dreams come true.

3D-print me a house, please: Is this eco-affordable pod the solution to the Irish housing crisis?