New York meets Dublin in this ODOS Architects-designed modern Ranelagh house for a transatlantic couple and their dog, Trixie.

Arriving at this home is something of a surprise. Turn down a narrow lane, and Autumn Duncan and Ian Dempsey’s house is hidden behind a wide white wall.

The wall is actually a rather brilliant gate, opening up to a secret courtyard and a house that unfolds through glass and poured concrete over four remarkable levels.

Autumn is from Ohio, via California, but met Irishman Ian, who works as a financial trader, when they were both living in New York. So how do you balance such different backgrounds and design traditions, and create the house of your dreams?

Step one: find the site. The couple had been looking in their chosen Ranelagh/Portobello area for some time before they spotted the vacant site, which had been used for parking. But isn’t it an expensive risk to build yourselves? “It actually worked out about one quarter cheaper,” says Autumn, “and it’s so nice to get something you made, something that suits your life.”

Step two: choose your architect. Ian came to ODOS Architects via recommendations, plus research. “I gave them a spec, and when I met them, I knew we were on the same page,” says Ian. “The top-level list of things we wanted: how many bedrooms, parking?

“Light was important because I work long hours during the week. In the longer months, I wanted to pull in as much light as possible; and in the winter to have interesting lighting so it feels nice when you’re in the house in the dark.” 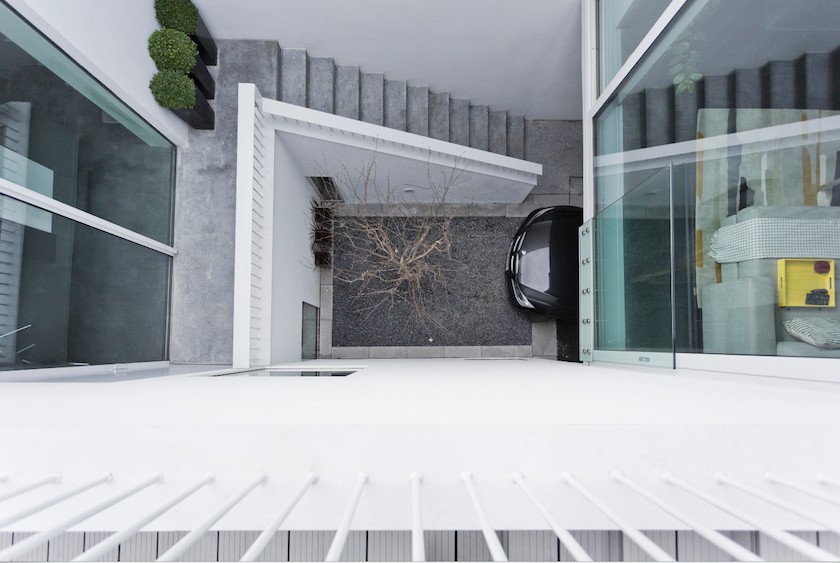 Another part of Ian’s brief was for an outdoor space off the bedroom. “That had come from an apartment I’d had in New York that had a balcony, so you can check what the weather’s like before you get dressed,” he laughs.

“He’s very good at seeing the bigger picture,” says Autumn. “I’m more detail-oriented, so I did more of the interiors.” “Some of these modern houses can be a bit minimalist,” adds Ian. “Neither of us are into pure minimalism, so Autumn warmed it up.” Autumn agrees: “We work well as a team.” 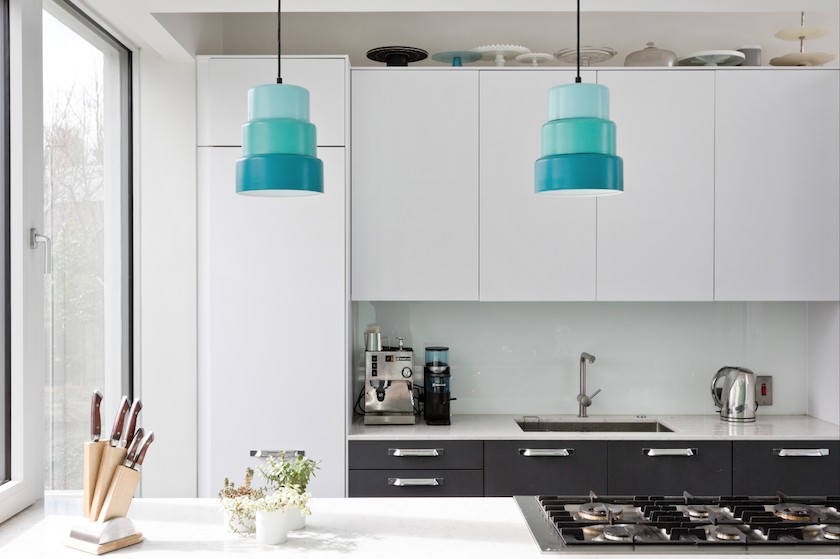 In return, Dave O’Shea from ODOS says both were clients who came with their homework done. “This was never going to be a standard build,” he explains. “They were very interested in exploring something unique, so it was challenging — in a good way.”

We’re sitting in the kitchen, which is up a level from the courtyard, and which has one huge glass wall out to the garden. Patterns of light and shadow play across a pale green wall beside the dining table and, when Autumn turns on the overhead crystal-dripped light fitting (a Verona Horizontal Glass Cylinder by Impex) it creates a cascade of glitter across the space. As we talk, a flight of birds add their shadows to the mix. 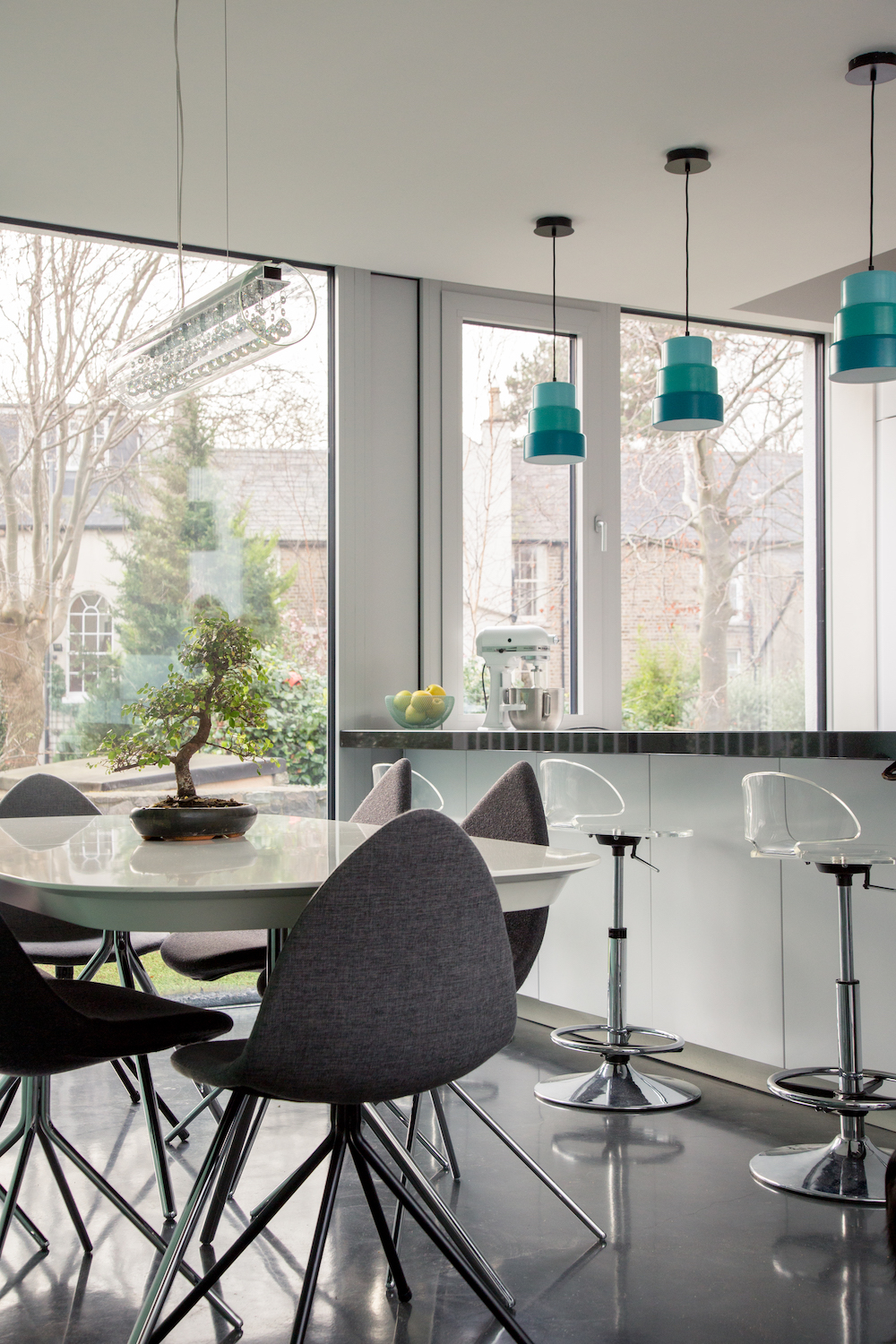 There’s also a large Britannia range in the Porter & Jones kitchen, perfect for Autumn’s cake business, Lark & Owl, with just the right amount of what Autumn describes as “Americanisms” — including the huge fridge and the waste disposal in the sink. “The builder was so sceptical of that,” she says. “He kept saying, ‘Are you sure?’ I was, and I love it.” 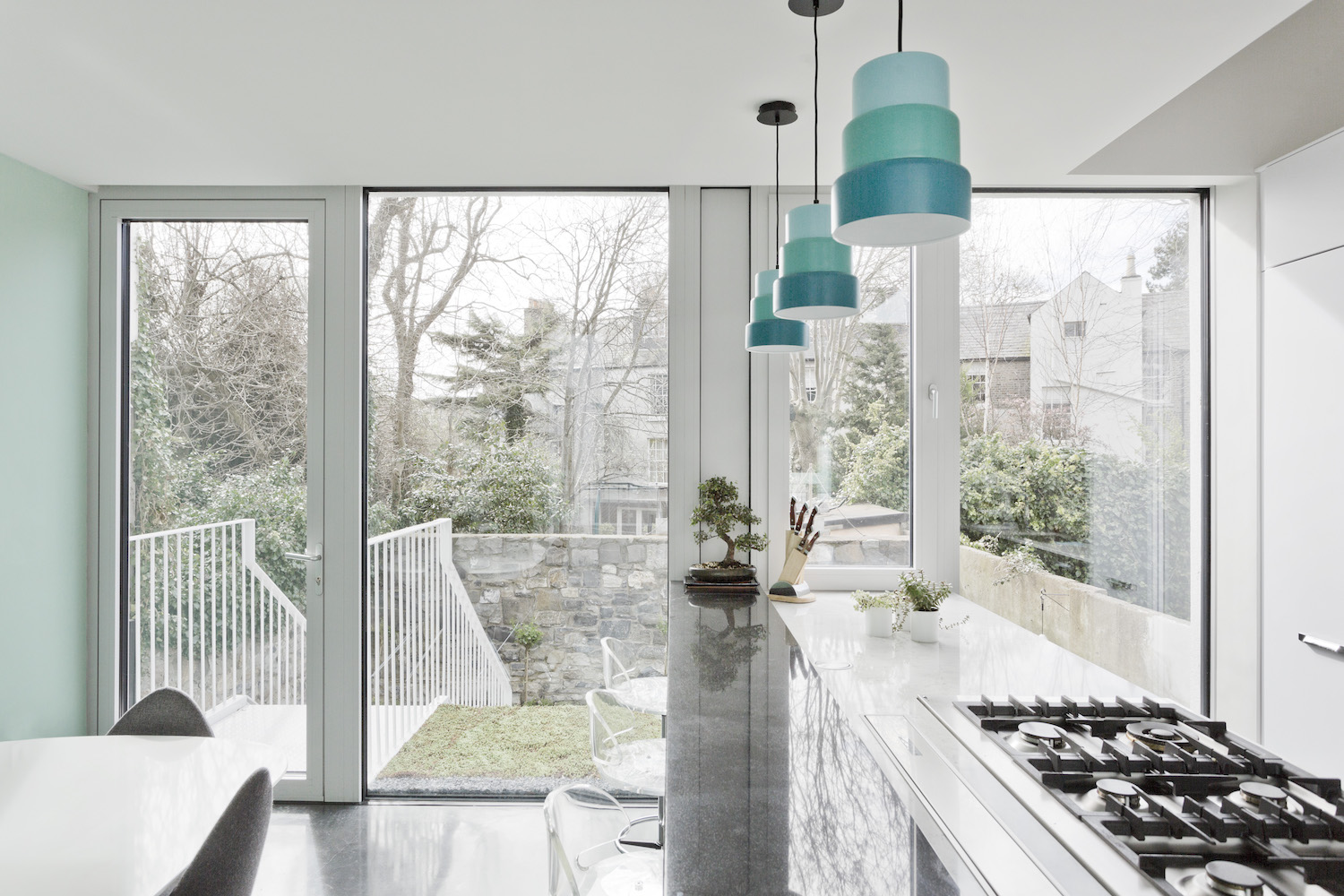 Like many builds, it took a little longer than expected, and the couple ended up moving in for Christmas 2014, six months before the house was finally completed. “I woke up with builders every day,” remembers Autumn ruefully. “But it was a good thing because we could make sure everything was just how we wanted it.” Going through the house, what stands out is both Ian and Autumn’s attention to detail and their frequently witty taste. 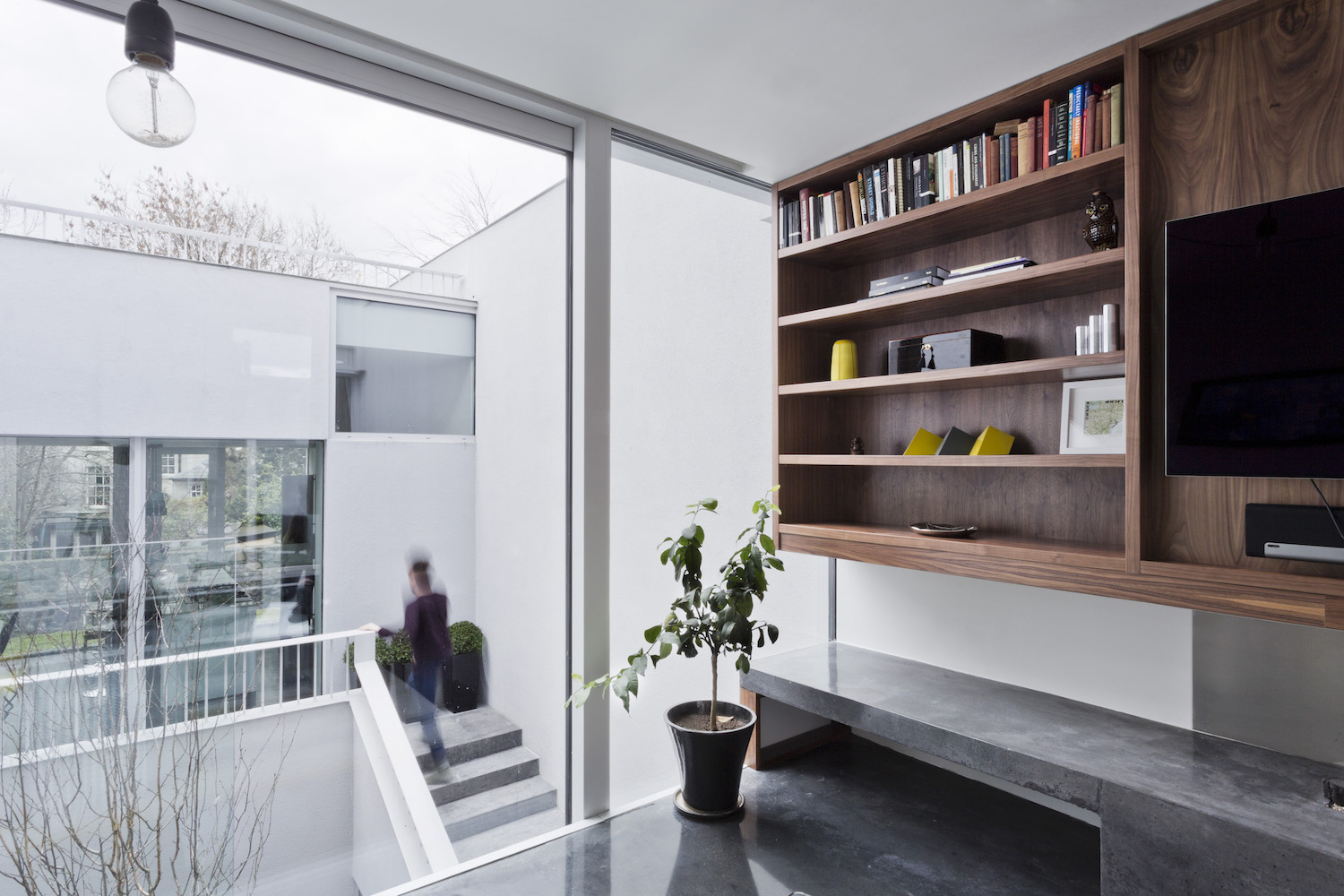 Next door to the kitchen, the downstairs WC is a decadent dark space, with black tiles, a poured concrete sink surround, and references to “Jack” everywhere. There’s a signed photograph of Kiefer Sutherland as Jack Bauer in 24, a framed Jack from a pack of playing cards, and a large Jack from the children’s game. “When we were dating in New York, we’d go out to dinner, and Ian would say ‘I’m just going to The Jacks’, and I thought that was mad. What was the ladies’ called? The Jill? So when we came to do this space, I thought yes, it’s got to be The Jacks!” 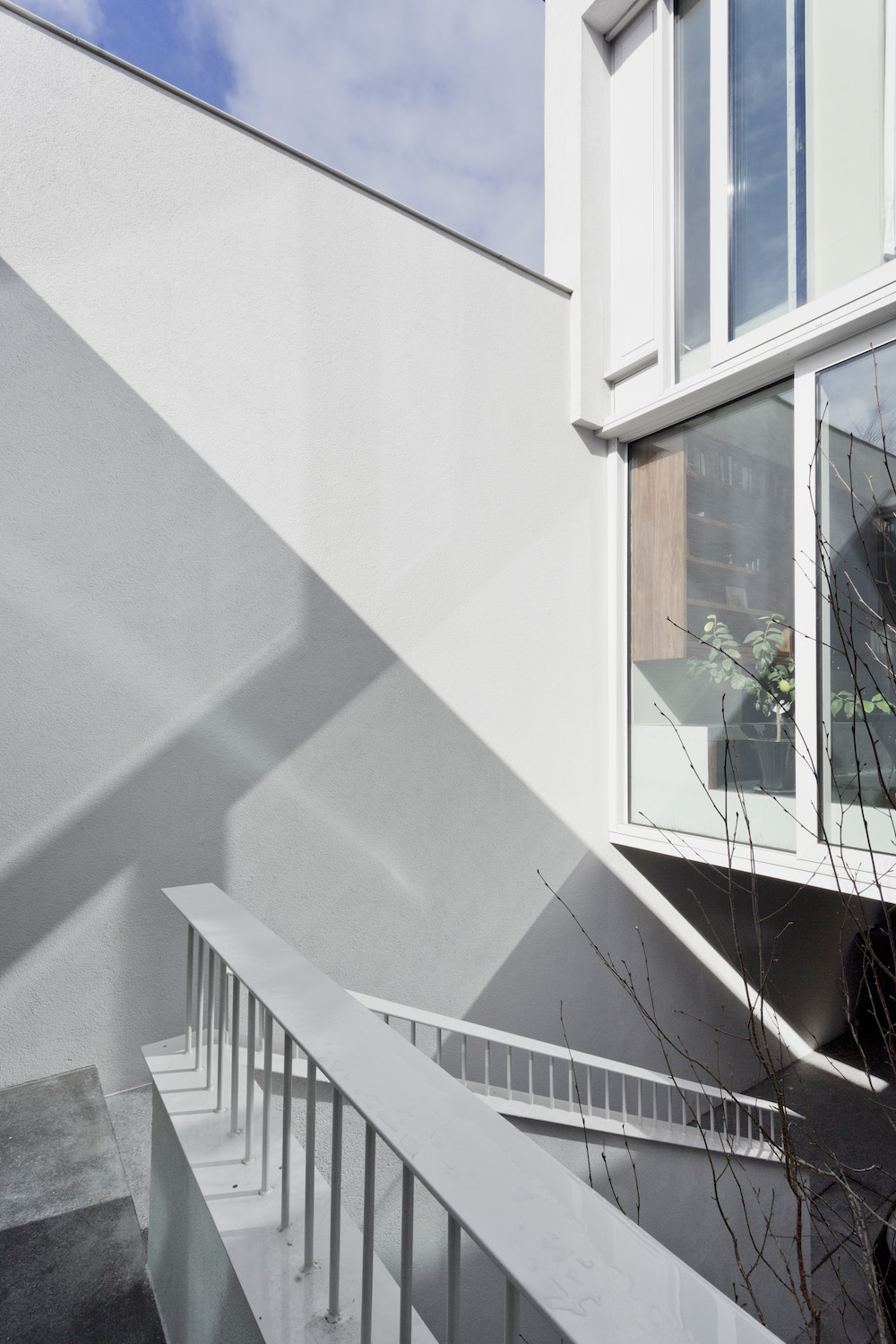 Trixie, the couple’s happily exuberant puppy, follows us up the stairs to the living room. Here, Ian’s taste for mid-century furniture is present in an Eames chair, its walnut is picked out in a wall unit, which the couple worked with the architects to design. It was then built by Jan Watté of Watté Woodwork.

Hidden in the corner is Ian’s favourite: a drinks cabinet that caters to the couple’s taste for classy cocktails (nurtured in New York) and Autumn’s love of glassware. There’s clever storage, a fridge, and enough space to chop, pour, shake and stir to your heart’s content. And Autumn’s favourite? A Manhattan, naturally.

At garden level, there is a pair of guest rooms, while all the way up top is the master bedroom, which opens onto the roof terrace. It’s surprising in Dublin, when space is at such a premium, that there aren’t more of these clever solutions to getting your outdoor fix, while still having somewhere to park your car. This one is sheltered by walls just high enough to give some privacy, while still letting in lots of light.

You feel as if you’re up in the trees with the birds, and it also provides a lovely open feel to the sleeping area. Bringing ideas you’ve found, discovered or dreamed of from your life experiences around the world is one of the most wonderful things about working with the right architect to design your own home. 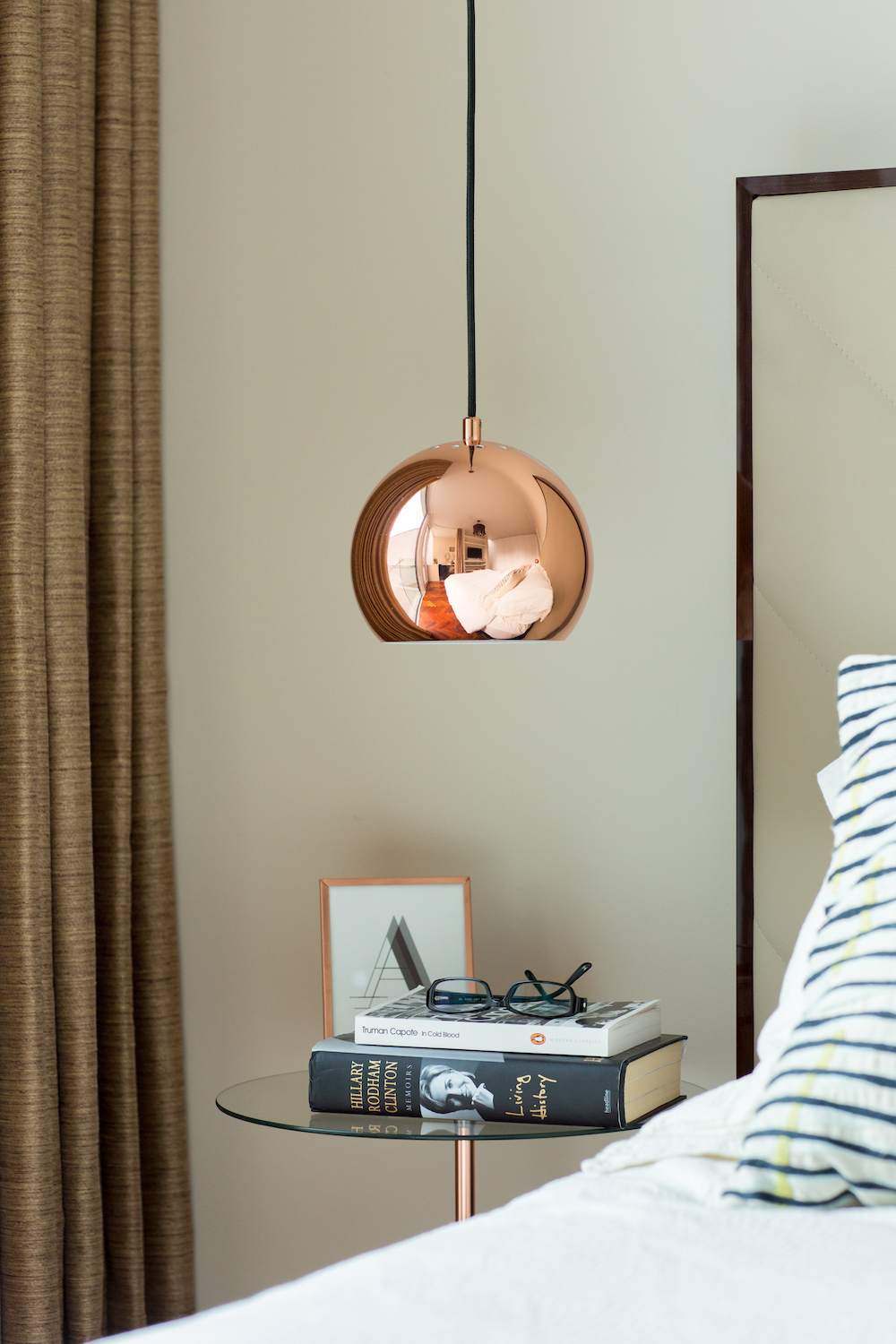 “Yes, there were some nightmares,” says Autumn. “They couldn’t get the lorry through the lane to pour the concrete, so the enormous hose had to come up and over the neighbour’s house. And I was waking up at 7am to builders for six months. But I never had a moment when I thought it wasn’t worth it.”

“You go through stages,” agrees Ian. “There’s this process where you question your sanity, and all these things that inevitably happen – but just a few months into living in a smashing house you’re ready to do it all again.” “It’s great to see our ideas in place,” says Autumn. “To look and say, Oh yes, that worked.'”

‘The Devil Wears Prada’ celebrated its 15-year-anniversary this year and the cast and crew have been divulging previously unknown secrets...

Flirty, naughty, sexy? Just when did Halloween costumes start having to be any of those? The creeping trend has taken...

Love fruity, hard seltzer? The Pure Piraña van is giving away free drinks around the country

Hard seltzer has been the drink of the summer and Heineken’s new Pure Piraña is no exception.Surviving a heat wave...

No better way to celebrate the changing of seasons than with an autumnal forest walk at one of these Irish...

They’re a neat way to clear some clutter, or just display some favourite pieces.

There are some movies that are designed to make us feel good; to stimulate, to uplift and soothe the soul...

More and more of us have been filling our homes with leafy companions, so we've asked Caitlin Owens from Belfast shop Coffee and Cactus for her advice on caring for them.