What to Cook Tonight: Chicken Rye Schnitzel with Mustard Sauce

Ah, one of the best midweek meals (and – hurrah – one that the kids have taken to as well). If you don’t want to make the mustard sauce, just serve some mustard (I prefer English here) on the side. I like it with?a sweet ?and ‘sour cucumber salad?tossed with dill, or?pickled or braised red cabbage. Little waxy potatoes too, please.

Method
Put the thighs between two sheets of greaseproof paper and flatten them with a rolling pin. (Bash them, but not so violently that the chicken flesh starts to break up.)

Set out three broad shallow soup plates (or something similar). Fill one with the flour and season it well, the next with the eggs and the last with the breadcrumbs.

Make the mustard sauce. Melt the butter and gently saut? the shallots until soft. Add the vinegar, whack up the heat and reduce to about 1 tbsp. Add the wine and boil to reduce by half, then add the cream, mustard, lemon and salt and pepper and heat through. If it becomes too thick (the lemon juice will thicken the cream), just let it down with a little water. Set aside to reheat later.

Season the thighs, then dip each one in the flour to coat, then the egg, then press into the rye crumbs. Set them on a non-stick baking sheet as they are ready.

Heat half the groundnut oil in a large non-stick frying pan. Cook the thighs over a medium heat for four minutes on each side. The coating should be golden and the chicken cooked through. Sprinkle with salt and pepper and quickly squeeze lemon juice all over the schnitzel. Quickly reheat the sauce. Serve the chicken immediately with the sauce. 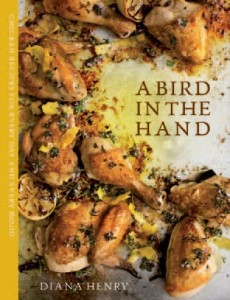 Extracted from A Bird in the Hand: Chicken Recipes for Every Day and Every Mood by Diana Henry (Mitchell Beazley, 2015), winner of the James Beard Award for Best Book Single Subject at last week’s ceremony in New York. Her next book, Simple, is out in September. Photograph by Laura Edwards.