On the only road into Cobh, you come across a long bridge where you can see Belvelly Castle on the other side. The road then takes you right past it, giving you a nice long look. The castle has been part of the view since the 14th century, when it was built, but it’s recently had an update. Couple Anne and Garry Wilson renovated the building, turning it into a family home, and commissioned Meath-based Irish sculptor Orla de Brí to create an installation on top of it.

Entitled ‘Quiet Listening’, the sculpture features a three-metre bronze human figure facing a five-metre gold-leafed bronze tree. Orla explains that the couple gave her the freedom to create whatever she felt best suited the historic building. “I went down very much to immerse myself in the castle, and just see what kind of ideas would pop up,” Orla explains. “It was quite daunting really, when you see the castle in such a beautiful location, and you’re very conscious of coming up with an appropriate idea that’s visually striking.” 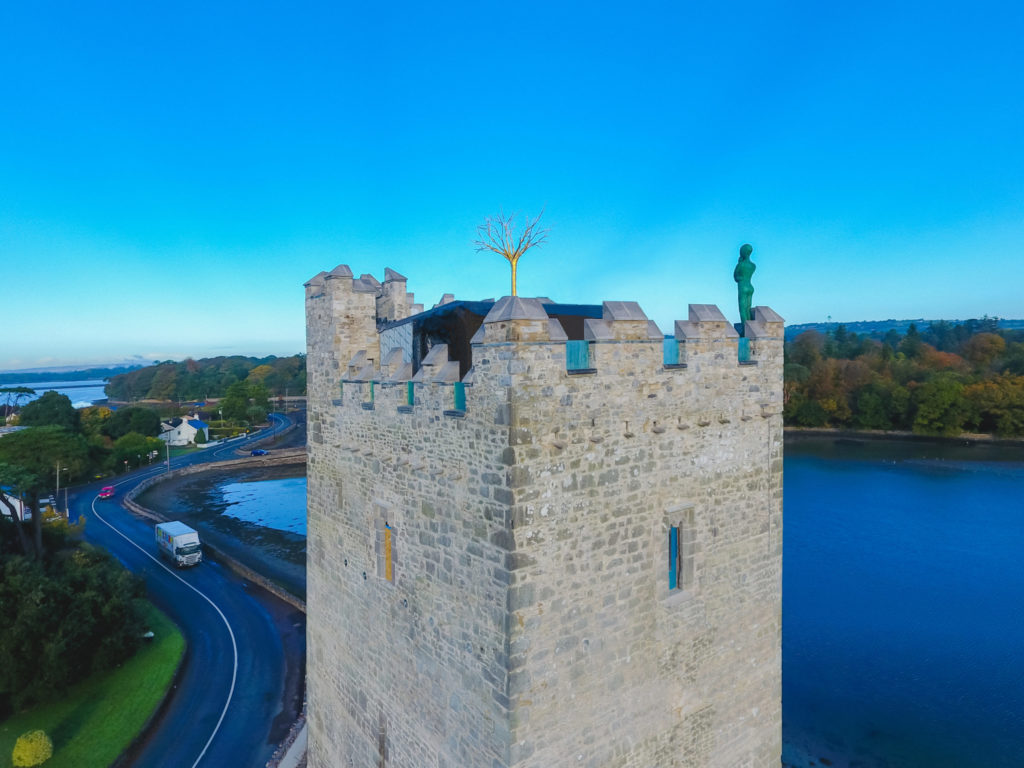 Once in the castle, Orla said she was struck by the fascinating stories the couple told her about the building. “I don’t think I spoke for 20 minutes. The sculpture kind of came from that. It was me trying to turn a feeling of listening and contemplating into a three dimensional piece.”

She said this process took her some time, but stemmed from the idea of incorporating a tree. “I use trees and branches in my work a lot, and there was a tree growing inside the castle when they bought it. So I was thinking about how nature had started to take back the castle. Trees are also a symbol of new beginnings, and that kept coming back into my mind as well, and then the idea of listening to stories from the past. So it’s all those things coming together.”

Once she had her idea, the long and physical process of actually making these huge figures could begin, which took over a year. Orla first carved the human figure out of a large polystyrene block. Once completed, the figure was covered in brown packing tape, and then painted with modelling wax. Finer details were added at this stage. The figure was then cut into three sections, and acetone was poured into the polystyrene to dissolve it, leaving a hollow wax shell.

These shells were sent to the foundry, to be filled with molten bronze. Orla explains that she got it back like a jigsaw, the head and shoulders, the torso and the legs. “Then I started cleaning up all that bronze, there’s an awful lot of sanding in sculpture. You use a series of different sanding heads, and then you start welding it back together again.” 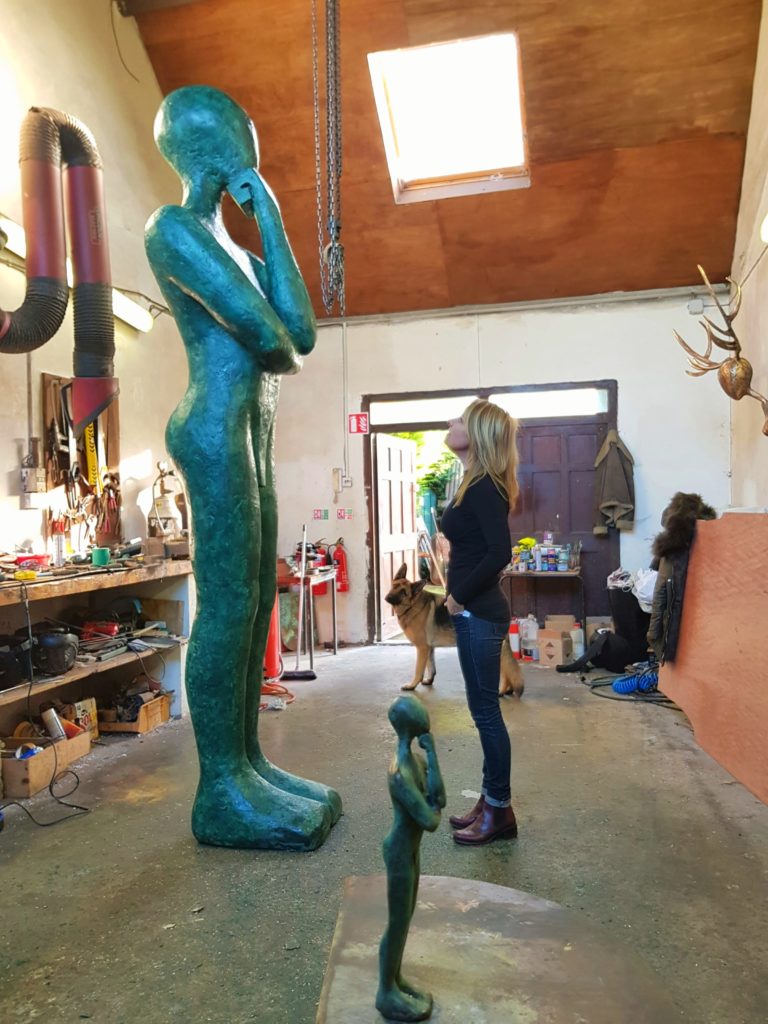 The next stage was patination,  where the bronze is heated and chemicals are added to create different colours. “The reason I made the figure green and the tree gold was to honour the building. They were the colours that you see on grand domed Cathedral roofs or churches,” Orla explains.

As well as being time-consuming, the process is also extremely physical. Sculpting, welding and sanding piece of this scale are challenging, and the sheer weight of bronze also takes some consideration. “At the studio I have a pulley system that can lift two tonnes,” Orla says, “so as the bronze gets heavier, you have to strap it up and move it.” But physically, you’d want to keep fit to do it. You have to love it, because it’s hard work.”

The tree was created through a similar process, but in many more different pieces. Orla actually took moulds from real branches. Once they were cast in bronze they had to be carefully arranged to look as natural as possible, and the whole piece was gold-leafed in two sections by a craftsman in Birr. Orla was delighted with the finished effect: “The colour of it is just beautiful. Even if the sky is grey, it has this gorgeous warm colour, and when the sun hits it, it just glints and shines.”

The finished piece had to be installed by crane to lift it on top of the 80 foot castle, and now can be seen from all around. “It was a private commission,” Orla says, “but in many ways it’s like a public commission as well,” and the local community has embraced this addition to their landscape, allowing it to take on an endless variety of meanings. “There have been all sorts of responses locally,” Orla explains. “I wanted people to be able to take something from it as they went past, so even a child could look up and see that it’s man and nature. But people will also take different meanings from it themselves, which is really nice as well. They’ll see stuff in it that I haven’t seen.” orladebri.ie