Watch: Shia LaBeouf Locked Himself Inside A Lift For A New Art Project

A lot has been said about actor Shia LaBeouf in the past; he frequently grabs headlines (and not always for the most positive of reasons), and thanks to his latest series of art projects, he is going down a slightly different route and making himself more accessible to his fans.

Have any LaBeouf fans ever dreamed of being trapped in a lift with the man? Well, students at Oxford University had the opportunity all day yesterday. As part of his latest project, entitled #ELEVATE, the Transformers star, alongside collaborators Luke Turner and Nastja Sade Ronkko, were in the motionless elevator for 24-hours. Visitors could enter and discuss whatever they wanted.?He only emerged to speak at to a group of Oxford students yesterday evening before returning to the lift.

?How do we do this and not feel douchey about it?? LaBeouf asked at one point, according to Variety. ?How do we make this egalitarian like the Internet? Let’s just move the talk to the elevator.? 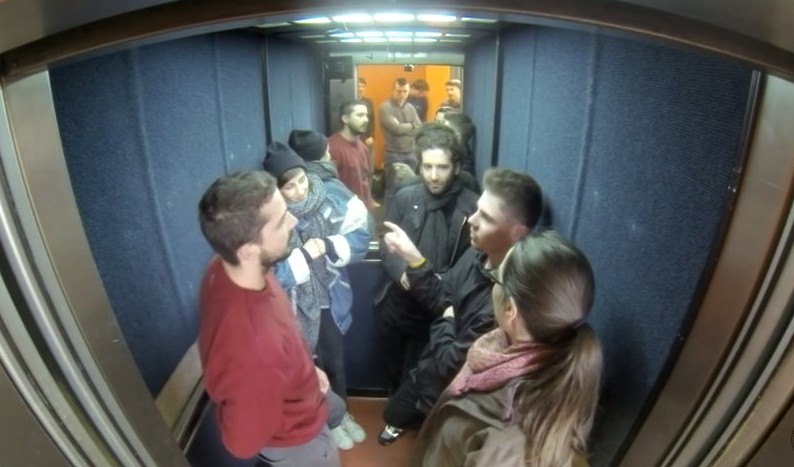 This project is latest in a line of performances including #ALLMYMOVIES, in which LaBeouf watched (you guessed it) all his movies, and #TOUCHMYSOUL, a call center involving LaBeouf and his performance partners.

Reports say that during the “enforced act of intimacy” the actor was asked a range of questions including ?what’s your favourite Saturday?? and has played a game of ‘snog, marry, avoid.’ Other topics broached included how his parents feel about his art, which animal he would want to be and which movies he wants to see.

You can watch highlights of the whole thing below (it was live-streamed on Youtube) but skip two hours in to see LaBeouf interact with the students.

Say what you want about the man, he knows how to keep people talking.