Attracting bees to your outdoor patch is a cinch, with a little forward-planning. We speak to two flower growers in Wicklow for their picks of bee-friendly flowers.

No matter what size patch you have – be it a windowsill, balcony or full-blown garden – we should all focus on increasing the amount of bee-friendly flowers in our outdoor spaces. The good news is, it doesn’t have to require a lot of effort.

Bees don’t know the difference between weeds and flowers, and the former are valuable food plants, so if you can bear it, leave the dandelions, clover and the lawn alone.

“All wild flowers and weeds are great for bees,” says Britta Baranowsky of The Flowerfield, who grows seasonable and sustainable blooms in Tinahely, and who is chairperson of the Flower Farmers of Ireland association.

“But the list is really endless. My Iceland poppies are just starting to flower now and I’ve spotted lots of bees enjoying them already. If you sow them now, you will get flowers in late summer and again around now the following year.” 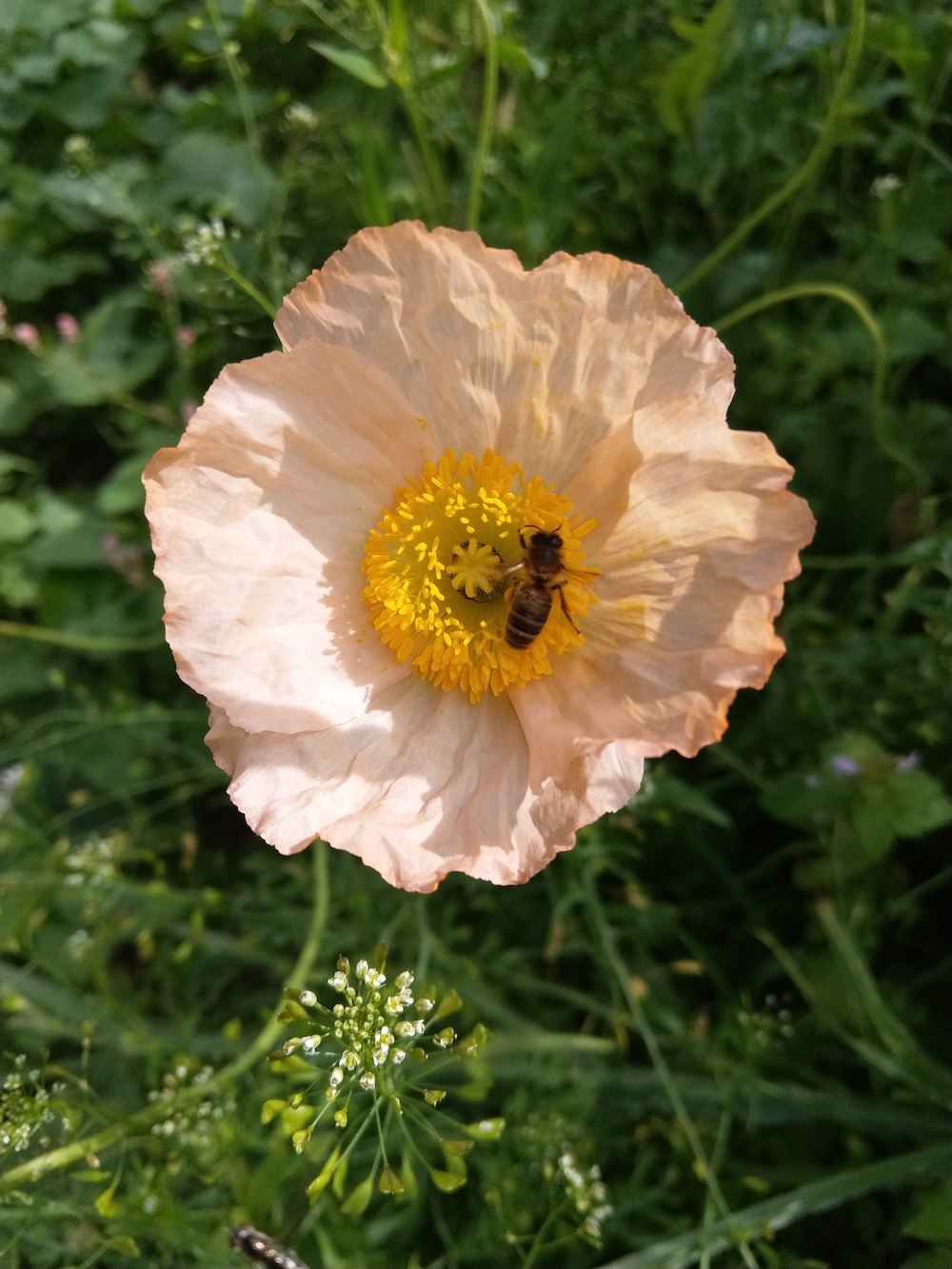 Double flowers like roses, and flowers with long trumpets like fuchsia, shouldn’t be a priority if you want to attract bees, as the pollen can be difficult to get at.

Although it’s best to have flowers and flowering trees all year in the garden, everyone has to start somewhere. In early summer, Britta says to look to “the whole mint family, as well as thyme, oregano, chives and the whole allium family”.

Meanwhile, Fionnuala Fallon, the noted garden writer, who established a sustainably-managed flower farm (The Irish Flower Farmer) in Manor Kilbride with her photographer husband Richard Johnston in 2015, has plenty of space-dependent advice for pots, balconies and gardens.

Overall, she advises “to keep new plants well-watered, deadhead faded flowers regularly, protect against slugs, use a good-quality compost if you’re growing in pots or containers – a soil-based one is slower to dry out and is best for perennials and shrubs.”

And to maintain, “Give container-grown plants regular liquid feeds of seaweed or tomato feed during the growing/ flowering season once they’re established.” Below is Fionnuala’s list, and do note that if there is an ‘E’ after the plant name, it means they are edible for you too.

“Floriferous, long-flowering, drought-tolerant, compact perennials such as the invaluable Mexican fleabane (Erigeron karvinskianus), which produces its clouds of tiny, daisy-like pink-white flowers for months on end, and the purple-flowered, ornamental oregano (Origanum ‘Rosenkuppel’)

All of the above, plus some fast-growing, floriferous annuals including cosmos (examples include the tall, white-flowered Cosmos bipinnatus ‘Purity’ and the more compact, ruby-red flowered Cosmos ‘Velouette’), both of which also make excellent cut-flowers.

Annuals such as borage, cornflowers (Centaurea cyanus), sunflowers (Helianthus annuus) and the super-fast growing Phacelia tanacetifolia – this is typically used as a green manure but if you let it flower, its silver-blue blooms are absolutely adored by pollinators.

Many trees and large shrubs are also an excellent source of nectar and pollen – examples include our native hawthorn, hazel, alder, rowan, crab apple, willow, horse chestnut, ornamental cherry, most fruit trees and common garden shrubs such as berberis, forsythia, potentilla, mahonia, viburnum and cotoneaster, but these are generally best planted between late autumn and early April.”

Read more: This garden in the Wicklow Mountains blends into the wilderness

Read more: ‘Just like bees working together to keep a colony alive, we too need to think as a community’

Pressed, dried and captured in resin; the best dried flowers for your home