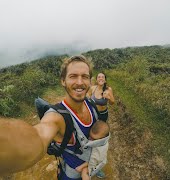 Mark Arigho of Arigho Larmour Wheeler Architects saw the potential for a family home amongst the Scot's pines of this triangular back garden.

“I think when people hear an architect is designing their own home, they imagine it’s completely wide open and you can do anything,” begins Mark Arigho from Arigho Larmour Wheeler Architects, of the home he designed in the suburbs of Dublin. “But life’s not like that, and all the things that give a building context; the site, the environment, the neighbours, the brief – they all combine to form a unique piece of architecture.”

His resulting family home is certainly unique but nestled within an area of protected trees at the foot of his in-laws’ back garden, it didn’t initially seem like the ideal site. However, the magnificent collection of Scot’s pines were part of the draw, and once the site area of shrubbery and brambles was cleared, the vision became clear.  “I think we were all shocked at how much space there actually was.”

The plan was to create a home that felt like it was in the trees, as supposed to beside it and Mark wanted to get as close as he could to them. The triangular site was slightly awkward, but with views into the neighbouring garden, a pedestrian lane, and a main road, the idea was to maximise the feeling of space and blur the boundaries of the relatively small property.

Designing with the help of his partners at Arigho Larmour Wheeler Architects, Jane Larmour and Patrick Wheeler, Mark also took inspiration from the neighbouring homes.

“In our area there’s a lot of rough-cast pebbledash, as well as Tudor-effect cladding from the Arts & Craft movement, so we took that as a design starting point and brought it into the 21st century,” he explains.

Try out this delicious aubergine dip with smoked paprika

Originally intending to use a reclaimed brick with a light lime wash, the prohibitive price and sheer height of the two-storey eastern facing wall – “we didn’t want it to seem too monolithic” – he settled on a Roadstone soapbar, a long brick about 100ml in height, and wooden cladding on the upper floors to group the windows and break up the building.“I wanted to get the texture of the reclaimed brick because they’re a bit bashed up, so I asked the bricklayer to knock the soapbars out of sync. He thought I was crazy,” laughs Mark, “but he eventually got what I meant”. Covering it all in a light lime wash, the building has the texture they craved, and a visible structure that would have been lost in a pebbledash.

To protect the tree roots that creep under the site, they decided to raise the entire house a metre off the ground on mini piles joined by a concrete ring. “It was just another hoop to jump through,” explains Mark of their conservation efforts. “We knew it would be worth it – to be within a metre of these incredible Scot’s pines. From the upper floor windows it feels like you’re in a treehouse.”

They complemented the soapbars with a poured concrete floor that spreads throughout the ground floor, bookended on by two exterior stoops at the front and kitchen doors. “We wanted to keep the amount of materials to a minimum and the idea was that the concrete just flowed out and lightly touches the ground outside. With the boys too it’s been great, watching them run in and out, trailing dirt. It’s very practical.”

Sitting here on the kitchen stoop, you feel utterly surrounded by nature, the nearby road is drowned out by rustling leaves, chattering birds and busy squirrels. The dappled light streams in through the windows and it seems that the entire project has been a triumph in considered, contextualised design. I ask Mark if there have been any particular delights since moving in, and he’s thoughtful for a few moments. “I think it’s more contentment with how it all turned out, that the design came to life exactly as we had envisioned.”

I press for examples and he points to the two windows in the corner of the kitchen. “There was a temptation here to drop down these windows so you could sit down and see out. But that corner is actually closest to the boundary fence and if it was any lower you could see it, and the game would be up.” Inspired by Luis Barragán’s trick of putting obstacles in the way, Mark held firm and now the windows that frame a view of uninterrupted forest.

“It’s brilliant,” Mark smiles, “it really gives that sense of space, that isn’t actually ours, and I’m so pleased it worked.”

It’s a perfect example of what Mark, Jane and Patrick return to again and again when tackling a project – context. “You can’t shoehorn ideas from one project into another, every project is completely different. You need to look at what’s there and come up with ideas that serve that particular project.”

Mark has used the surroundings and the architecture of his neighbours as a stepping stone to creating something unique and unusual, and yet equally at home among the trees.

This stunning Georgian house on Clontarf’s Strandhill Avenue is on the market for €1.5 million

Zac Efron just put his LA home on the market for €4.86 million and it’s the ultimate bachelor’s pad

It looks like Zac Efron is preparing to make a...

Pillow Queens: ‘the goo Irish people have for local music is magnified during these very strange times’

Ready to freeze in half an hour: Try this apple crumble ice cream

These flavourful and nutritious breakfasts are a great way to...

For the day that’s in it: Ballymaloe’s quintessential Irish stew