See Inside an Austrian Winter Wonderhome

We visit a winter wonderhome in Austria: a traditional Tyrolean ski chalet expanded into a modern extension…

On a sunny slope above the medieval mountain town of Kitzbühel in Tyrol, artist and photographer Alfons Walde – famous for his ski scenes and winter landscapes – lived and worked until his death in 1958.

His Tyrolean villa, built in the 1920s, is still inhabited by his family today. Now young Austrian architect Monika Gogl has added a contemporary glass, steel and stone house – with around 290 square metres of habitable space – with the goal of respecting the extraordinarily scenic site and the traditional existing house. 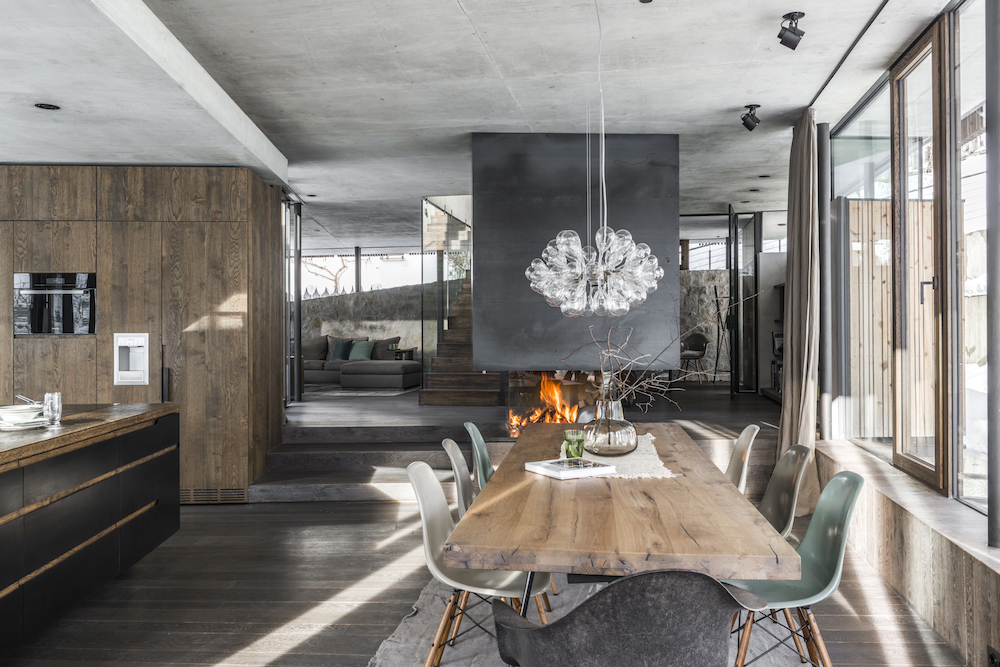 The client – a granddaughter of Alfons Walde – requested an open, light-filled room with the garden and the beautiful backdrop of the Kitzbühel Alps integrated into the living space. A listed building on the eastern half of the site had to remain untouched. “The biggest challenges were positioning the new construction on a difficult slope, the narrowness of the site and the architectural conflict with the existing house,” explains Monika. The spatial concept presents the new building as a contemporary counterpoint to the old house. Both buildings stand independently of each other as examples of construction from different epochs. “We tried to adapt the new construction to the topography of the site,” Monika continues, “and embed it as well as possible into the terrain. The changes of level in all three storeys create differentiated zones while maintaining the open plan.”

The 50-something couple who commissioned the new building live in Vienna, but use their house in Kitzbühel more and more. They started off visiting on weekends and holidays, graduated to spending about half the year there, and plan to move to Kitzbühel for good once they retire, as it is such a family-friendly spot. The client’s mother (Alfons’ daughter) still lives in the old house next door, while the couple’s children often spend time in the new house, sometimes with their young friends in tow. For this reason, Monika calls Haus Walde a Generationenprojekt – a multi-generational domestic project that must fulfil many varied needs. 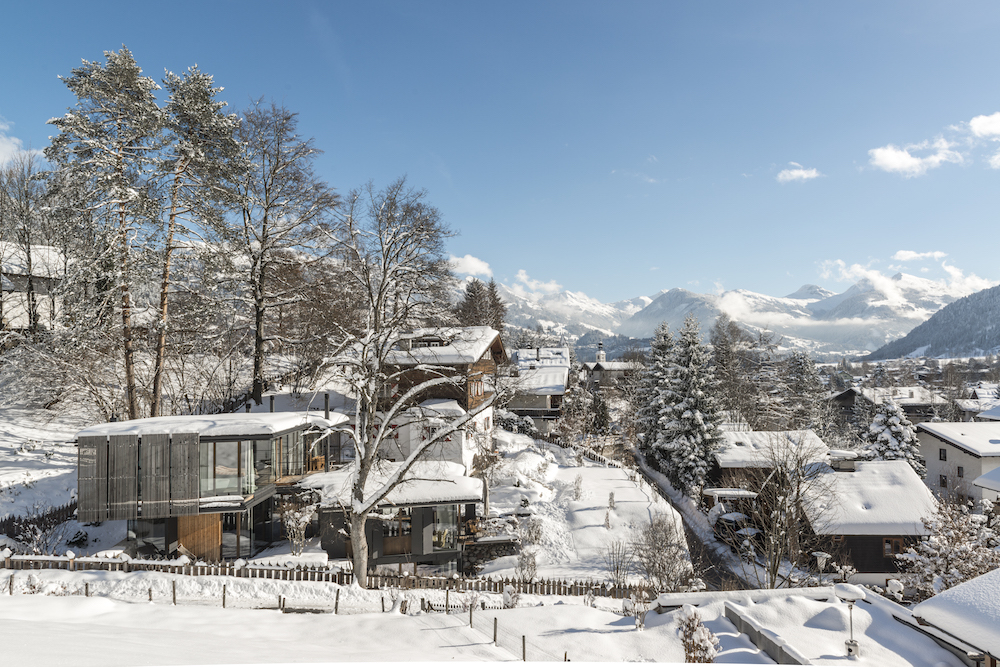 For the internal materials and colours, the clients requested that the new interior should reflect traditional Alpine chalets and their typical finishes – wood, steel, stone – but in a contemporary way. Monika was given carte blanche to design key interior objects such as the kitchen, table and hearth, while the owners added only a sofa and low table of their own choosing to complete the main living space. Monika also commissioned German designer Isabel Hamm for the bespoke glass chandelier and glass pendants, which punctuate the Alpine interior with a touch of glacial glamour.

The central element of the ground floor is an open fireplace which sends surplus heat to the geothermal heat pump and creates a cosy atmosphere. As a modern contrast to the earthly materials of wood and natural stone, the ceiling in the ground floor is made of exposed concrete. In the bedrooms, oak dominates floors and the ceilings.

Outside, to the rear, a natural stone wall gives the residents ‘backing’ from behind, while the large-scale glazing opens up varied views on the wonderful backdrop of the Kitzbühler Alps. Moveable facade elements of wood ensure a feeling of spatial openness, while safeguarding the family’s private sphere. The multi-layered structure of the facade and the interlaced rooms result in a complex spatial experience. Terraced roofs with projecting canopies adorn the exterior, while the interconnected inner rooms are further enlarged by generous terraces without thresholds. Swaying over the stream along one edge of the site, the west-facing terrace enlarges the living area, making optimal use of the limited space. Cleverly, the long pathway between the on-street carport and the basement, which is lit from above, serves as an art space for pictures and sculptures. Art, as you might imagine, will always take pride of place in Haus Walde.
gogl-architekten.at