We repealed the eighth: here’s what’s next for women’s health in Ireland

As it’s the week of International Women’s Day, we’re looking at the status of women’s healthcare in Ireland; how far we’ve come and what’s still to be achieved. We spoke with Professor Mary Horgan, the president of the Royal College of Physicians of Ireland and consultant in infectious diseases at Cork University Hospital, to find out what’s next on this healthcare journey. Here we cover everything from cervical cancer to the impact of Brexit on Ireland’s healthcare system…

We repealed the eighth amendment, winning back our bodily autonomy, and the cervical check scandal was exposed – but each of these issues is stand-alone; there’s no higher body, or “overarching strategy” as Mary describes it, to deal with women’s health as a whole.

“2018 was a really busy year for women’s health, and I think it highlighted the lack of an overarching strategy,” Mary says. “Usually crises occur, and then they’re responded to, but it’s not as planned as I think it could be.

Related: Breast cancer awareness –
how to check your breasts at home

“I certainly would call for an overarching strategy for women’s health; starting at adolescence, when you’re preventing pregnancy and protecting against sexually transmitted infections; through to the pregnancy era; then onto menopausal and post-menopausal issues that women have. I think that they’re the three main areas of women’s life and health,” she says.

Cervical cancer can become a thing of the past

Over the past six months, it was suggested that Australia could be the first country in the world to eliminate cervical cancer. It’s expected the disease will be completely eradicated by 2028, and it’s all down to their commitment to the HPV vaccine and cervical screenings.

We asked Professor Mary Horgan if the same could happen here. “Absolutely,” she tells us. “The HPV vaccine is really, really good at preventing cervical cancer, and that combined with a screening programme (that not only looks at cells but also doing HPV testing), would go a huge way in eradicating HPV.”

Related: Vicky Phelan urges women to listen to their bodies

HPV – or the human papillomavirus – is passed from person-to-person, usually during sexual activity. It can lead to changes in a person’s cells, which in turn could lead to cancer. For that reason, it’s vital that all girls are vaccinated before they become sexually active.

“We’ve seen a number of high-profile patients, including Laura Brennan, who’s been a huge advocate for that,” says Mary. “So [eradication of cervical cancer] is absolutely doable with the right political will, and the will on behalf of the health service.”

But first, the HPV vaccine must be gender-neutral

For Ireland to truly make HPV (and in turn, cervical cancer) a thing of the past, the vaccine must be made available to boys. This is for two reasons.

“First of all,” Mary says, “it’s for herd immunity. The more people you have vaccinated against preventable diseases, the less likely they are to pass it on to females.

“And secondly, a lot of the cancers HPV causes are not just of the cervix; but also of the head and neck (which boys can develop too). So it’s really important that the vaccine is rolled out to as many people as possible.

“We’ve called for a gender-neutral vaccine for HPV, which I understand from the minister will be rolled out in September.”

Forward-planning is essential if we are to improve women’s health in Ireland. In addition to having vaccines against preventable diseases, Mary says, “I would encourage all women to undergo screening for cervical cancer and breast cancer, but also to remember post-menopausal issues like osteoporosis.”

We need to educate ourselves on how we prevent these common illnesses. For example, “If you ever see older ladies with a ‘dowager’s hump’ because they’re hunched over, it’s because of a loss of bone mass, or osteoporosis, which is often preventable,” she explains.

Prevention is better and easier than the cure. By planning ahead and ensuring you’re getting the correct nutrition, such as calcium and vitamin D, you can prevent conditions like osteoporosis from ever developing. “Weight-bearing exercise is also really good for prevention of osteoporosis,” Mary advises us.

Maintaining good, general health is really challenging, Mary acknowledges. “Whether you’ve got kids or not, life has gotten so much busier.

“I personally think that the usual good diet with exercise is really important – and I don’t mean running marathons or anything like that. But good, daily exercise for 30 minutes is not only good for your physical wellbeing, but it’s also hugely important for your mental wellbeing. That’s been shown time and time again.

“It just clears your brain of all the things that come into it during the day. So regular exercise – of any type – for at least 30 minutes is important,” she says, adding, “And never do what I do and go to the supermarket hungry!”

Brexit’s impact on healthcare in Ireland

With Brexit looming ever-closer, Mary warns it could have a negative effect on healthcare here in Ireland.

“There was funding that was made available in the early nineties to provide cross-border services,” she explains, “so, for instance, Letterkenny hospital in Co Donegal has a shared care model of cardiology with Altnagelvin hospital in Co Derry. That allows for free movement across the border for patients to go in and use the services they have in the north.

“And there’s a whole range of these services right around the border – that, because there is no border, it’s seamless,” she says.

Related: A second Brexit referendum could be
on the cards if delay is rejected by EU

“I am (and the presidents of my sister colleges in Scotland and England are) of the view that people need to consider the patients at the centre of any Brexit deal that may happen, because free movement really has improved patient care in the border area,” Mary tells us.

“The other area of concern is heart surgery for paediatrics, which happens in Dublin,” she says, “so the kids from the north come down to Dublin for that, which is a lot easier for families than flying over to England for long periods of time. It’s nearer home. And that could potentially be impacted if there’s a border put back up (in terms of delays in transfers, and so on).” 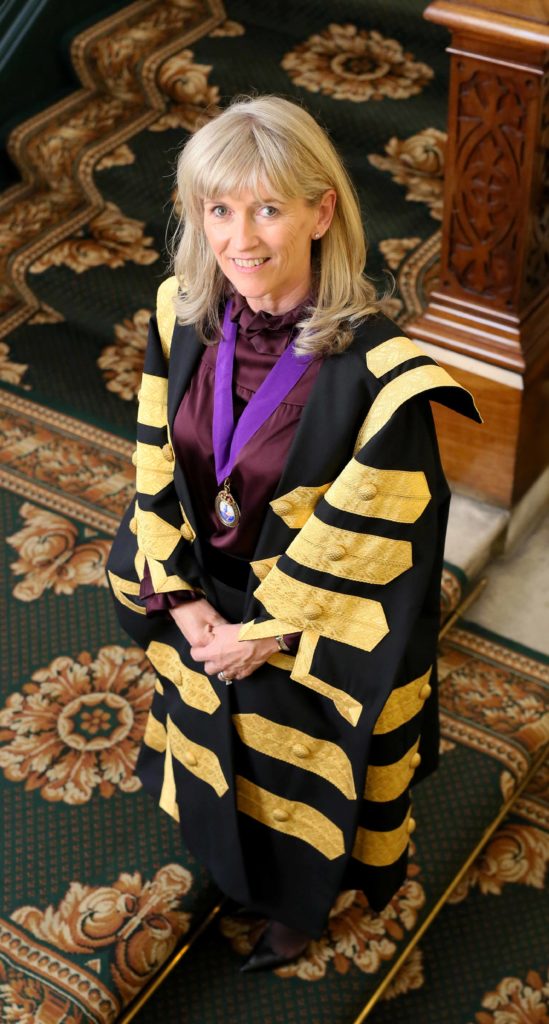 After chatting about women’s healthcare, we asked Mary about the number of women entering the medical profession. We already know that nursing is a female-dominated industry, but are many women becoming doctors?

“Believe it or not, most of the students in medical schools are females,” Mary says. “Certainly those that come straight from secondary school into medicine, those classes are predominantly female.

“With the graduate-entry classes (those who have a primary degree first and decide to come back to study medicine), those classes tend to be half-and-half between males and females.

Supports for women in the industry

Given the high number of women who are studying to become doctors, we wondered if there are supports in place should they choose to become mothers. Mary says there are.

“The HSE supports training part-time, or half-time, and obviously trainees would be entitled to maternity leave like any other worker in the healthcare service, so there is flexibility,” she says.

Related: My life as an emergency nurse

“What I would like to see more of is when those trainees are in consultant posts like I am, that they should have more flexibility in working part-time, working three days a week, for the duration of whenever they feel it’s important to be with their children – and then come back full-time.

“To be able to change the type of work-week they have, depending on their responsibilities. I certainly would be a big supporter of that flexibility,” Mary says, “so that we can retain really good graduates here and respond to what’s important to their family life.

“The ‘one size fits all’ model of doctors needs to go,” she says.