After an impressive career spanning two decades in TV production, Debbie O’Donnell would be forgiven for taking some time out from this fast-paced industry. Instead, she’s taking things to the next level.

Having cut her teeth as Series Producer of Ireland AM for eight years, before becoming Series Producer and Executive Editor of Xposé, she won IMAGE’s Creative Businesswoman of the Year in recognition of her extensive achievements. Earlier this year, she decided to leave the security of a station staff job and set up her own media and production agency, Seahorse Media.

What made you decide to leave your role in Virgin Media and set up on your own?
Having spent 20 years in the entertainment and lifestyle industry, I felt it was time for me to leverage my expertise and create my own brand. Creating something new is a passion, I love a project and the bigger the better! There’s no better time than now; my two boys are getting bigger so I have more headspace and energy to work on new projects.

What were the highlights of working in Virgin Media?
The people. I have worked with so many fantastic people over the last two decades and built so many friendships along the way. I’m lucky to have worked with such interesting and talented people both on and off screen. Also, the challenge of creating new shows. When we launched Ireland AM it was into a new broadcast market in Ireland. There was no Irish morning TV 20 years ago, everyone was listening to morning radio so people needed to be convinced to change their morning routines and that took time. It required a lot of grit and persistence, but gradually people started turning the TV on in the morning and so Ireland AM became an essential part of their lives. Starting something new in TV isn’t for the faint-hearted, you need to be fully committed from the start. As they says ‘if you build it they will come’. After Ireland AM, I launched Xposé. To be honest, at the time I wasn’t 100% convinced that it would work. The premise of the show was to have the girls filming each report themselves, then edit and present, all while in heels! But we tweaked the format, the filming was left to the professional cameramen (and women) and the rest is history.

Greatest lesson you learned working in TV that can be applied to all roles?
Firstly, success is 99% determination and hard work and 1% talent. My degree was in Sociology and Psychology and my Post Graduate degree was Public Relations. But the fact that I hadn’t studied broadcast media or journalism was never going to stand in my way. Secondly, the show must go on, whatever drama or technical difficulty is happening. Some of the most interesting things happen minutes before you go to air. Working on a show is all about a team effort and it needs the team to pull together to make it happen. It’s never about one person – ever. Finally, treat everyone with the same respect no matter who they are. It’s the person that you least expect that may have the greatest impact on you.

Why did you decide to go out on your own?
It’s never easy but after 19 years in the same company, it was time. I wanted to create something new, to begin a new chapter in life and in work.

What does your job entail now?
My job is about building a business. My expertise and experience are in content and telling stories so that is the focus. I love a new challenge and that’s what a new business is, a challenge.

What have you carried from your old job to your new role?
A strong work ethic. For the last 19 years the focus has been on delivering a polished show to a strict deadline so that is ingrained in me and my work practises. Never cut corners, deliver your very best, always.

How different is it being your own boss?
I’ve always worked to my own agenda; Andrew Hanlon was my boss in TV3 for over 17 years and thankfully he allowed me the freedom to run with my own vision on both Ireland AM and Xposé.

Did winning IMAGE’s Creative Businesswoman of the Year impact your career?
Winning the award has had a huge impact on me and my career. In fact, it was an instrumental part of my decision to take the next step and set up my own company. It gave me the nudge that I needed, a great confidence boost. I’m so thankful to IMAGE for that. 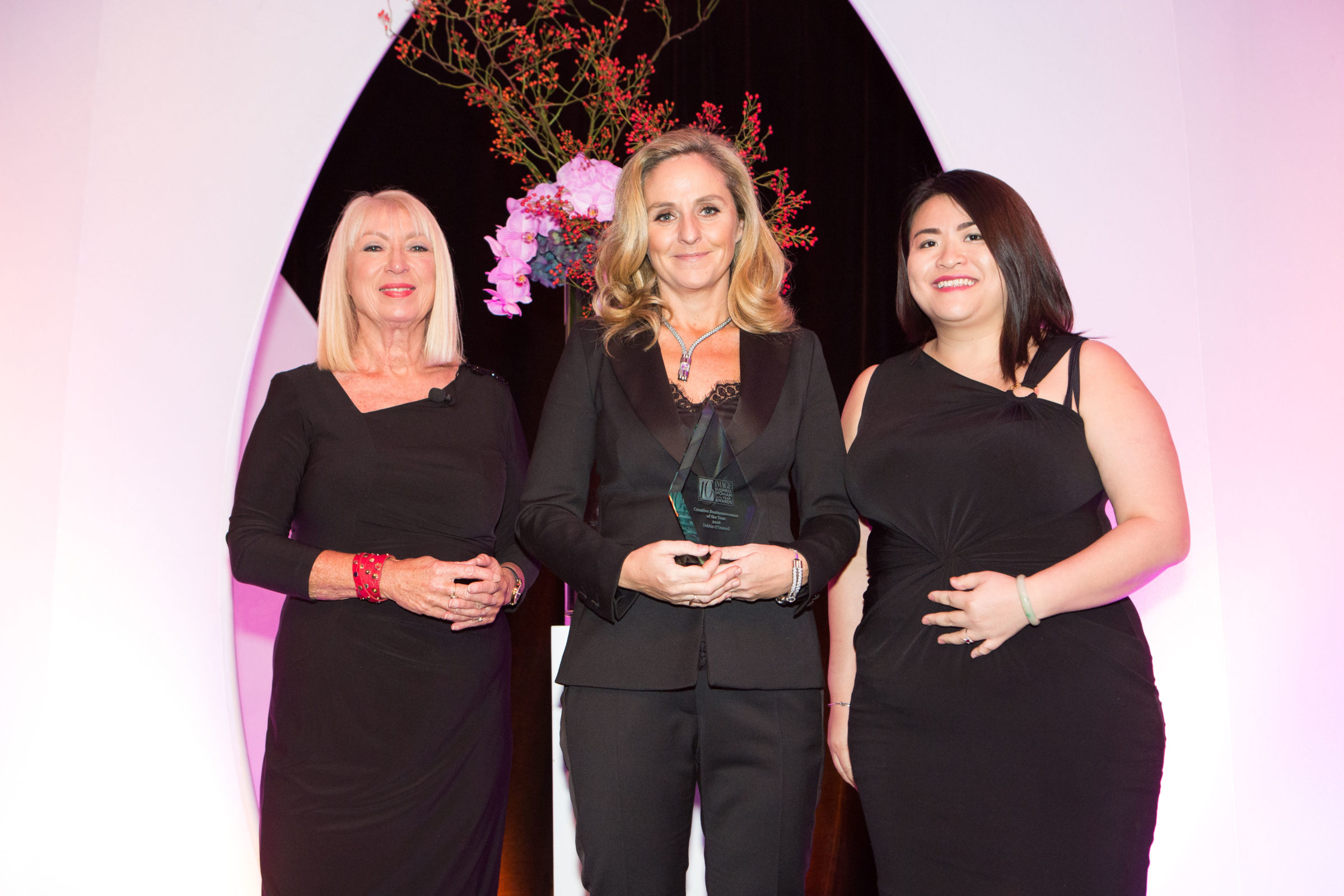 Debbie O’Donnell, accepting her award for Creative Businesswoman of the Year, pictured with Anne Doyle and Hazel Chu. Photograph by Kieran Harnett.

What qualities do you think successful women have in common?
Determination, positivity and motivation. Successful women don’t ask for permission or forgiveness. They make decisions and stand by them. They’re not afraid to admit when something is wrong and will always support and stand by other women.

How have we seen the movement towards gender equality progress in your industry?
I have always worked with, for and alongside women. More can be done to get more women’s voices on the airways. Virgin Media has always had women’s voices on air. With shows like Ireland AM, Elaine, to Xposé, women’s voices have dominated the daytime shows for many years. We need to keep women’s voices on air either as presenters or as contributors. This is vital.

How can young women be more confident in the workplace?
I think good role models are essential. It’s so important that we provide examples for younger women so they can confidently develop and progress in their careers. It’s important for women to believe there’s a clear path in their career so they can progress. Training is key as well, either on the job or formal training. I have always worked with students straight out of college, usually journalism students who are super bright and dynamic. Their voices need to be heard, after all they represent the voice of a new generation. With positive leadership and encouragement, we will create the next leaders of the country, in every business and discipline.

Is there anything else you want to achieve in your career?
Absolutely! I have only started. I want to create something new that will give other people a platform and a voice.

Which women inspire you?
My mother and my sisters play a huge role in my life. Also, every woman who is brave enough to have their voice heard on TV inspires me. It takes courage to stand in front of a camera and each time a woman’s voice is heard on our airwaves, it makes a difference. It may be the one voice needed to make a difference to someone’s life at that very moment. More women need to be heard and having the courage to step in front of the camera paves the way for others.

What advice would you give to anyone going out on their own?
Surround yourself with a few key, strong people who will guide and support you, people who will also say ‘no, you’re losing the run of yourself’ when they need to. These people are the pillars that will help you build your new business or career. Also, identify mentors that can help you, people who you admire and will take the time to talk you through the highs and lows that will come with any career change.

What advice would you give to anyone looking to pivot in their career?
Go for it. There is never a ‘perfect’ time – the time is now. You have more experience and opportunity than you think.

The IMAGE Businesswoman of the Year 2019 takes place on Monday, November 25, at the Clayton Hotel, Burlington Road, Dublin 4. Tickets for the prestigious awards event are now available here.