One Family’s Escape to the Wicklow Countryside

Just as the Celtic Tiger began to roar, Philip Judge and his wife stumbled upon a century-old cottage in the wilds of the Wicklow countryside. So they escaped Dublin city in pursuit of a new dream? 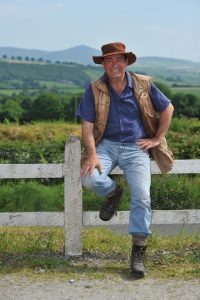 I never meant to live in Wicklow at all. When my beloved and I made an offer on a small cottage in sight of the Yellow Mountain, it was because we couldn’t afford to buy in the city. The Celtic Tiger was prowling Dublin at the time, but its yowling couldn’t be heard in this far corner of the garden county. So we clung to our low rent flat in town and figured that a small, pretty property in the wilds which we could occasionally visit and possibly let was plausible and alluring. We looked at a place, made a speculative offer and were startled to have it accepted. Despite our dodgy profession as actors, we had mortgage approval by the end of the week and we did the deal. A pal I hadn’t seen for a while came to see the show I was in at the time – in the bar afterwards he asked if I’d done anything interesting recently. Still stunned, I said, ?I think I bought a house.? I’ve spent longer choosing a new beach towel.

Our newfound bolthole was well inland and beach towels weren’t necessary, but we bought wellies and tweeds and started to spend our weekends here to observe the changing seasons. The spring dawdled into summer, which ambled into autumn, and I really noticed the difference. We explored the surrounding area and discovered the river flowing languorously through a forest of ancient oaks. We picnicked beneath the same trees in May amidst the bluebells. In June, we found a fantastic pub on one side of a steep valley. We sat outside sipping our pints among the roses and felt we could almost reach over and pluck a sheep from the facing hill. And every morning admired the view from the front door across the fields to Sliabh Bu?.

The house was on an acre so the Beloved planted fruit trees and I planted vegetables. My carrots were flaccid matchsticks and my onions were shrivelled pebbles, but my lettuce was prodigious. Any visiting friends from the city were forced to take sacks of the stuff back to town with them, and if they didn’t make grateful cooing noises, they weren’t invited again. A year or so passed. The Tiger’s roar reached our valley, and the cottage doubled in price, but the fruit trees were blossoming, the vegetable patch had become a kitchen garden, and we knew we were rooting in. Then the property bubble burst like a grenade in a cow pat. Along with most of the rest of the nation, we were squeezed and had to reluctantly let the flat go.

Now we certainly weren’t going anywhere, but we had been here long enough for even a lifelong city boy like me to feel comfortable. We made friends at a gentle, unhurried pace and had our two sons. They, of course, are locals, and through them, we have both integrated even more. The Beloved is a vital member of their school’s board of management and I am a decorative member of their GAA club’s committee – when I was accidentally elected vice chairman, the Beloved laughed for days. I have learnt to ride, and from time to time I help our neighbouring farmer friends herd cows – often without getting kicked. The weather is naturally a challenge, but even in the dreariest winters, I get out and about with my chainsaw to keep our wood burning stove alight with a vivid merriness that brightens the gloomiest day. 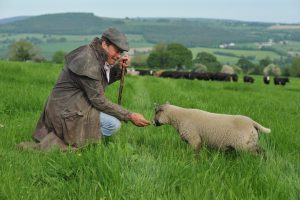 As I often tell the boys, we live in a part of the world where other people come on holiday. Mostly they snort derisively, but right now they see my point. On the horizon across the valley Sliabh Bu?, the Yellow Mountain seems aptly named. Golden cornfields predominate and studded across them in pleasingly uniform ranks, the harvested bales are drying in the warm air. There are meadows of light green pasture interspersed amongst the yellow. Dotted with drowsy cattle, they make a geometric contrast. An oblique patchwork draped across the gently tilted hills, it is absurdly beautiful. It looks like an ad, but it is real, and I live here. 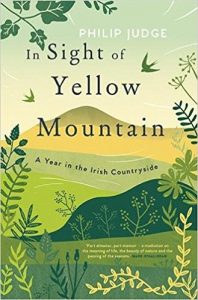 Philip Judge’s memoir, In Sight of Yellow Mountain: A Year in the Irish Countryside (Gill Books, €14.99) is available now in all good bookstores and online at Easons.com and Amazon.co.uk.