As their first tome lands in bookshops across Ireland, the DirtBirds comedy duo, Sue Collins and Sinead Culbert, tell us how it all got started…

If you’ve yet to watch one of the DirtBirds’ sketches or catch one of their live shows, well, I’m not sure what you’re waiting for… The pair have been selling out venues across the country for the last three years with their unique comedy act, turning the ordinary lives of Irish women of just about every nationality, social class and county into something worth giggling about. And now they’ve taken their writing from the stage and screen and packaged it neatly into a new book, which is set to stand out on the shelves of your local bookshop.

For those who don’t yet know them, the DirtBirds are Sue Collins and Sinead Culbert – two Irish women, both parents, who’ve worked in comedy for many years, doing stand-up and writing, whether for the stage or screen.

I’ll pause here for a moment to confess that I’ve personally known Sinead for six years now. Always one to bring laughter to a dinner table full of friends, she’s a natural in her field. But even I was taken aback when I first saw her perform on stage. It takes a certain level of natural talent, honed to perfection over a long career full of hard graft, to be able to make an audience laugh the way I saw the people all around me do. And her friend and colleague Sue is very much her equal in that regard. The chemistry between them adds that extra something special to their act.

After watching them on stage and online, I began to wonder how it all started. “I was doing stand-up, and writing comedy,” says Sinead, “and Sue, who used to be part of [Irish comedy trio] The Nualas, was doing character comedy and stand-up. We were both gigging in the same comedy club one night, and a couple of weeks later, somebody emailed me a review of that very show. The reviewer was a woman and she said her two favourite acts that night were mine and Sue’s, and she commented on how relatable the comedy was that we had both done. So that gave me an idea, and I rang Sue and asked if she’d want to write comedy with me, as I had an idea for a sitcom.”

That was not only the start of Sinead and Sue’s working relationship, but a solid friendship and a match made somewhere special, if not in heaven. “We got on very well from the start. Now, Sue’s side of the story is that I stalked her,” laughs Sinead.

“We worked on that sitcom together and BBC Three picked it up. It was called DirtBirds. It was very close to getting made, but there was a change in the commissioning editor, and so it got shelved, but we had all this material, and had done three years of development on it, which was amazing – it was like comedy bootcamp; we had to have a well-crafted joke every 30 seconds, or it was no good, so it was an amazing experience for us. And then we had all this material and all these characters and nowhere to put them. Then my husband and my sister and Sue’s friends all suggested we put them online. We put one sketch up and were shocked by the reaction. People just thought it was very funny. And then we put the beauty bloggers from Dundalk – Dee and Andrea – online, and that went completely viral; I think there were like 70,000 views in a day or something, which for us was incredible, and then it just grew from there. The feedback we kept getting was just how relatable it is, that people can really see themselves in the stuff we do.”

Taking it literally to the next stage
“We were on a radio show on LMFM, and the DJ asked, ‘So, when are you going to do the live show?’ So we started writing our first show, which was DirtBirds Live. We had no idea how it would sell, but we put it on in An Táin in Dundalk, which is a 300-seater venue, and it completely sold out.”

All the DirtBirds shows have been hugely successful from the start, with predominantly (but not exclusively) women in the audience aged anywhere from 20 to 85, illustrating just how relatable the comedy is to Irish females today, whatever their age. “There are more and more men coming to the show, which is great. For so long, we’ve been listening to men talk about their lives; or when they spoke about women, whether they were talking about their marriage or relationships, it was funny and may have been somewhat accurate, but it was always the male perspective. DirtBirds was women up on stage, talking about being married or in relationships, having kids, and living ordinary lives with ordinary struggles, but in a funny way.”

The duo’s second show, the Self-Help Tour, was even more successful as word spread between friends, sisters, daughters and mothers about just how funny their shows were. The pair became so busy that Sinead had to finally quit the day job to focus all her time on writing and performing, and Sue continued to juggle her own projects around their hectic schedule. Oh, and each of them is a busy working mother – Sinead is mum to Sophia (11) and Leon (seven), while Sue is a mother to two teenage boys – Vivian (14) and Milo (13) – and 11-year-old twins, Seanie and Lily. Any working parent will know the struggles of juggling work, childcare, and chauffeuring kids to and from activities. Add touring the country, working late nights gigging and early mornings writing before school-runs, and there’s little time for much else, but these two don’t seem to be ready to stop anytime soon.

The book
Which brings me to the pair’s new book, DirtBirds’ Self-Help Guide, which has just hit bookstores. Think of it as the light relief we all need in a world filled with anxiety, rage, sadness and despair. The first chapter, entitled “Rising Above the Crap – The New You” should give you a hint at the contents, and you’ll just have to take my word for it: this is a book that belongs on your Christmas shopping list for that friend who’s constantly stressed out and needs a good giggle. It’s even the perfect size for her handbag.

So how did Sinead and Sue go from writing stand-up to writing a tome? “We were approached by Ciara Considine of Hachette Ireland, who had seen our shows and thought there was a market for it. It made so much sense because that’s what we do – we write comedy! It’s a parody of a self-help book, and the antidote to this Insta-perfect life we’re all supposed to be living. We joke about the crap advice you’re given as a parent, the myths about perfection, which doesn’t exist. It was a really enjoyable process. Parenting is a struggle, and we’re trying to say, ‘You’re not on your own – we’re all in it together, and it’s tough. And it’s time we laugh about it and just have fun with it. That’s what life is. I think the pressure on women is enormous now – you’re supposed to have the BMI of Elle Macpherson, the patience of Mother Teresa, the arse of Jennifer Lopez, and a glittering career, and it’s just impossible! So we talk about how parenting is a pain in the arse – people don’t feel comfortable saying that because it makes them feel guilty, but we love our children; parenting is very rewarding, but it’s tough. And we also talk about fitness tips – how to love your muffin top. The constant struggle women have with dieting – you try desperately to lose those four pounds and then you go out one night and put it all back on going to McDonald’s on the way home. I think we need to give ourselves a break. We wrote one sketch on how to put your make-up on when you’re driving a car, as there’s just no spare time in a woman’s life these days.”

Feast or famine
Speaking of no spare time… How on earth do two busy working mothers manage to fit writing a book into an already extremely busy schedule of shows, sketch writing, and school-runs? “We wrote this book over the phone,” Sinead says, deadpan – she’s not joking this time. “We would get up at six o’clock in the morning. Sue would be in her house in Dublin 8 with her four kids, and I’d be in my house in Lusk with my two, before we got them ready for school. A lot of the content was inspired by what was going on in our own lives at that particular time, as women trying to juggle everything. We generally aim to write a sketch every week, but we have to have one every two weeks anyway. First you have to write it, then you have to film it, and then edit. And then we’re gigging every weekend, and working on writing the next show, which will hopefully be ready in the new year. We’re very lucky – there just seems to be a real need for women to go out and have a laugh at their own lives. We’ve heard people say things like, ‘I just watched two hours of my life on stage.’”

If you haven’t seen DirtBirds on stage yet, I highly recommend you get your favourite gal pals and book tickets for one of their shows ASAP. Their first Vicar Street gig is on Friday, January 24 (might I suggest you get tickets for a special friend and hide them inside a copy of the new book?). Show number three is currently being written, and the theme is No Filters. “We’re halfway through writing that, and that’s always the joy. It’s literally us laughing at perfection, so we’re very excited about that. We also want to write a sitcom. That’s the dream. We’ve started writing a script, but it’s at the very early stages.”

The real highlight of their job, Sinead says, is making a difference to audience members. “I got a message recently from a girl who was very sick, and she was allowed to come and see us. She said it helped her enormously to come out and laugh solidly for two hours. For us, that’s the job done. That’s really what’s important.” 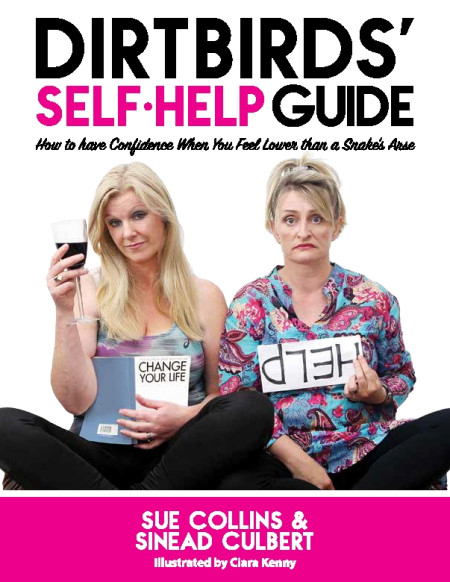 Haven’t seen one of their sketches yet? Watch on YouTube here.

‘I had a lot of anger and resentment towards how my treatment of my eating disorder was handled’: Evanna Lynch on the cathartic nature of writing her memoir