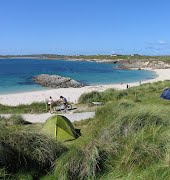 What to Make: A Toasty Nutty Salad with Raw Artichoke

FOOD FOR A HAPPY GUT by Naomi Devlin. Headline 2017.

Method
First, make the dressing: Put the garlic into the clean jar with the mustard, salt and lemon juice or vinegar. Pour in enough oil to 2-3 times the quantity of lemon juice, or 3-4 times the quantity of vinegar. You will be able to judge this by looking at the side of the jar, where the oil will float on the juice/vinegar. Shake the jar vigorously until a creamy emulsion forms, then taste and adjust the seasoning, adding more oil, lemon juice or vinegar, salt, or a little honey or pomegranate molasses if it’s too tart or your salad wants a little sweetness. Close up the jar and store the dressing in the fridge for up to 3 days. Give it a good shake before serving.

Cook the bacon very slowly in a dry frying pan over a low heat until crisp all over, about 10-12 minutes. Set aside when it’s ready, but don’t wash the pan.

Melt the duck (or other) fat in the bacon pan, add the bread chunks and fry gently until golden brown on all sides, about 5 minutes, then set aside to cool on kitchen paper.

Toast the walnuts in another frying pan over a low heat, moving the nuts around frequently to prevent burning. When the skins are starting to crack and the nuts are touched with golden brown, about 15 minutes, tip into a clean tea towel and rub as much of the skin off as you can. Set aside to cool.

Peel the artichokes and slice them into wafer-thin coins, preferably using a mandolin. Drop them straight into a bowl of cold water with the lemon juice added.

Add the extra honey to the dressing, so that it tastes mildly sweet. Put the rocket and watercress leaves into a mixing bowl and dress with half of the dressing, tossing to coat.

Divide the leaves between four plates, placing a mound on each. Scatter the toasted walnuts and cro?tons over the leaves and dot with pieces of cheese. Drain the artichoke coins, scatter as many as you dare over the salad, then top with the crisp rashers of bacon and drizzle with the remaining dressing. 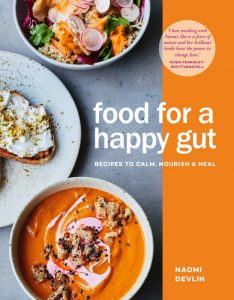 Extracted from Food for a Happy Gut by Naomi Devlin (Headline, approx €23). Photographs by Laura Edwards.

What to eat tonight: Fearne Cotton’s haddock burrito with a punchy salsa and homemade guacamole