I Proposed to My Husband On Leap Year

According to Irish legend, back in the 5th century St. Brigid of Kildare bitterly complained to St. Patrick that women had to wait far too long for men to propose and so he generously decreed that on one day every four years a woman could propose to a man. Progress! Leap day is a day that’s added to February every four years, making it a 366 day year. Author and event curator, Aoife McElwain tells Sophie White about the day she proposed to her now husband.

I had a radio show playing indie music for a few years and I was at a gig and started talking to this guy. He said, “you’re really familiar, have we met before?” I said I didn’t think so and then he asked if I had a radio show. “I recognise your voice,” he said. It was cute because I didn’t really have a huge listenership. So what had happened was that I had interviewed the band that he lived with, who were all his pals, a few months before and he had listened because of that and then he just kept listening which was really nice. So then we had a short MySpace courtship! And we’ve basically been side by side ever since.

He really encouraged me to start a blog which lead eventually to my writing. It wasn’t seen as a step towards a career back then, there were no expectations. It was just about having fun and we mainly thought it was cool to be able to put our hobbies online.

The year we got engaged, I kind of knew that he was probably going to propose that year. I wasn’t in a rush, I genuinely wasn’t, it was nice because we knew that we wanted to be together. Then at Christmas, a friend was like “It’s a leap year! You could propose.” She was only joking, but I thought “that’s exactly what I’m going to do!”

I took his mother out for dinner a few weeks before to ask her permission which was so lovely. She said “yes!” So our families knew, my mum and dad were very into it as well.

On the 29th of February, I brought him to the Iveagh Gardens and found a secluded tree and got down on one knee and said “will you marry me”. It was lovely and so fun. I can still see his face when I close my eyes. It was exactly the face I wanted to see, he thought it was really funny but also knew that I was serious because that was a fear I had: Would he take me seriously?

I was also kind of conflicted because obviously I believe a woman can propose to a man any day of the year! I was like: Am I perpetuating something here?!!

I brought a pin for him, a family heirloom. It was inexpensive but something that my mum had found for me. She had bought it years ago on a family trip so she gave me that to give to Niall.

Check out their gorgeous and highly individual wedding here.

After feeling stuck on a treadmill of busyness and burnout for most of her working life, Aoife McElwain had an epiphany in the autumn of 2015. “I had to figure out how to cultivate a slow, more sustainable approach to work. My way of doing that was to launch a series of talks to discuss whether it was possible to slow down at work and still keep up. When I tell people about my book Slow at Work  they often say ‘Woah, I need that book in my life.’ I always reply ‘Me, too. That’s why I wrote it.'” 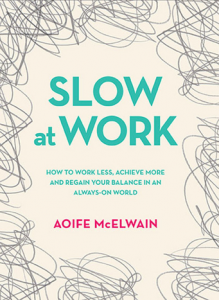 ‘We had our rescue dog Walter brought up for photos’: The small details that made this Irish couple’s wedding truly special