Getting To Know Millie Mackintosh

Millie Mackintosh launched her career as one of Made in Chelsea’s premiere season stars. Four years on, she’s left the orchestrated drama far behind. We meet the woman who is making a name for herself as one of celebville’s most likeable lifestyle ambassadors.

Life after a stint on reality television can be a surreal next chapter in a millennial celebrity’s life. Some disappear into the Sidebar of Shame sinkhole, striving for some semblance of relevance when the paparazzi need someone to stalk in Ibiza. Others seek more throwaway midweek television schedule fame in the jungle, or on a makeshift ballroom floor if they’re feeling particularly lower middle-class. 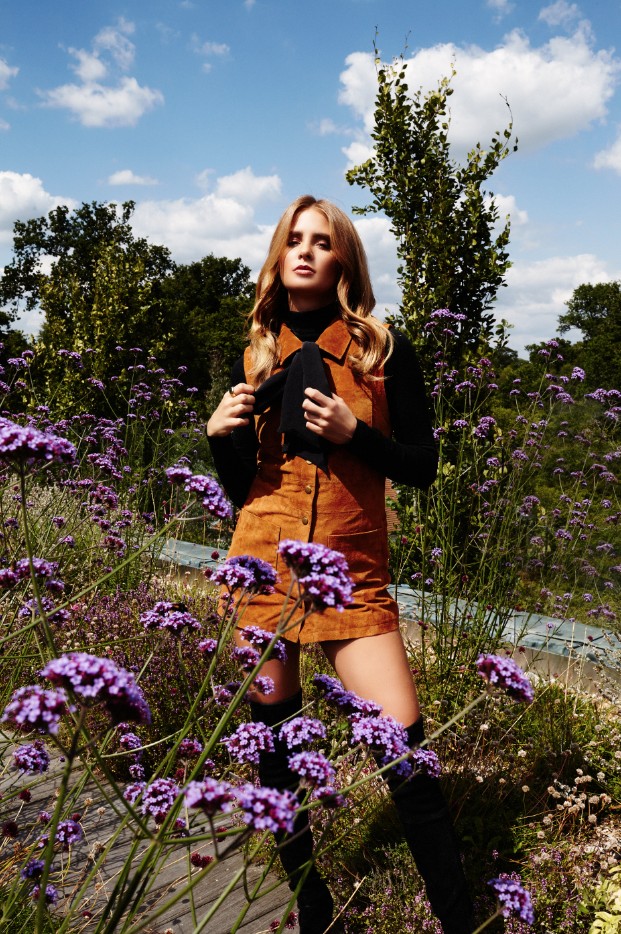 Then there’s Millie Mackintosh, a descendant of the inventors of Quality Street, former Space NK make-up artist, and now a budding lifestyle entrepreneur who began her career on Channel 4’s surprise smash Made in Chelsea, a show which repeatedly won us over despite the toff accents and ridiculous storylines. Since Mackintosh left the show in 2013, she has established herself as a fitness and healthy eating guru, as well as consistent style icon. The 26-year-old has a regular fashion line – next season promises a Little House on the Prairie vibe – and has recently published her first book, Made: A book of style, food and fitness. ?It is a pinch-me moment when I sit back and think about it,? she tells me as we overlook Dublin’s skyline from The Marker Hotel’s rooftop bar. ?Sometimes everything is so fast-paced that you barely stop and actually absorb it all.?

FOOD
This ?journey? began over two years ago, when Millie decided to get in shape for her wedding to musician Professor Green. She met with a personal trainer, only to be told the shocking news that her body fat percentage was far higher than it should be, hovering at an unhealthy 27 per cent. It was a wake-up call that saw her overhaul her life. Mackintosh banished the pre-packaged food that was making her tired. She now combines recipes from her nutritionist friend Madeleine Shaw and food writer pal Gizzi Erskine. Although both are ?quite different on the food scale? – Shaw tends towards gluten- free and dairy-free, while Erskine is ?a bit more indulgent and cheffy? – this healthy balance ticks the boxes for the young entrepreneur. Millie doesn’t cut out whole food groups – she still eats carbohydrates. ?I wouldn’t say I’m on a diet,? she stresses. ?I’ve just adapted my lifestyle to being more healthy. You can enjoy those things which are more indulgent when you want to, but not have them all the time.?

Mussels with ginger, onions and cider

A photo posted by Millie Mackintosh (@milliemackintoshofficial) on Nov 14, 2015 at 9:38am PST

Mackintosh’s slightly laid-back approach is soothing to hear. Especially when it is becoming apparent that orthorexia nervosa, an eating disorder which sees sufferers going too far when cutting out food groups, is an emerging problem, thanks to the media’s obsession with clean eating. Millie tries to avoid feeling guilty about what she puts on her plate.

?We have to be careful with talking too much about having a treat, because then you can associate that with guilt,? she says. ?You’ve got to not be too hard on yourself, and I think it’s just about making those healthier choices when you can. So you have to think, ?I just had a three-course dinner. I’m just going to work out extra hard tomorrow, do some cardio.??

WORKING OUT
Exercise is another recent passion of Millie’s, with which she is now intractably associated. Her Instagram is devoted to clips of her testing new machines in the gym and sharing tried- and-tested toning exercises with her followers. However, spending a couple of hours every day in a sports bra wasn’t something the younger Mackintosh thought she’d ever embrace.
?I hated it,? she insists about her past relationship with exercise. ?I wasn’t sporty at school. I wasn’t picked for any teams. I wouldn’t even enjoy going for a walk. I used to hate running. I still hate running. I’m not good at swimming.? Now she’s an evangelist for getting out and breaking a sweat, finding time every day for spinning, Pilates and boxing. She tones with a ready supply of lunges, barre moves and weight training. And then there is her relationship with Russell Bateman, the trainer behind the controversially named Skinny Bitch Collective.
?You do get a massive endorphin rush after,? Mackintosh says of Bateman’s classes. ?You never know exactly what he’s going to throw at you. Sometimes he throws in something new. It’s always challenging.?

A photo posted by Millie Mackintosh (@milliemackintoshofficial) on Oct 3, 2015 at 8:30am PDT

Millie is fantastically open about how her journey to daily gym visits wasn’t a straightaway success. Despite her naturally slim frame, her fitness levels weren’t always in a good place. ?When I first started, I couldn’t do a squat, I couldn’t get my knee to the floor when I did a lunge. My muscles were already tight,? she admits. ?It’s about realising it’s a transformation that is not going to happen overnight.

CHALLENGES
It is this honesty which has inspired her followers to hold her up as a role model. However, amidst all this positivity, trolls do bear their bitter teeth. ?Claim to be a fitness fanatic, yet you can’t even manage a pull-up – pathetic,? one wrote under a recent post. How does she shake these kinds of comments? I don’t have time to think about it and let it get me down,? she replies cooly. ?Also, I just think it’s ridiculous when it’s some troll sitting behind their computer. I get that it’s really hurtful to lots of girls. There should be more done to stop it online.? As for substantial moves to combat this very modern mode of bullying, Millie can only speak from her own personal experience. She was bullied in secondary school and her defence mechanism was to try laughing it off, although it doesn’t sound very funny.
?I’d say any bullying I experienced made me a bit tougher,? she admits, drawing parallels between all-female boarding schools and the fashion industry. ?Unfortunately, that kind
of bullying which happens at school, happens through life in different situations,? she observes. ?You can learn to be strong and not let the bullies affect you; you have to think of them as insecure themselves or realise they’re projecting their own feelings of insecurity on you.?

It helps when you surround yourself with cheerleaders, and Millie is lucky to have a supportive family. In fact, she’s dedicated Made to her two grannies, one of whom gifted her?a mini-skirt and the advice to ?just get your legs out – no one is going to notice your skin? when the teenage Millie was struggling with acne break- outs and her self-esteem. ?I think it’s quite funny,? she giggles. ?I don’t know if it’s good advice for everyone …?

Not your average Saturday night

A photo posted by Millie Mackintosh (@milliemackintoshofficial) on Jan 16, 2016 at 6:44am PST

Getting over things and moving on is a specific skill of Millie’s. While she describes the past few years as ‘surreal? and a ?whirlwind?, from the outside, it looks like she has it all plotted. Yet, Mackintosh talks about anxiety in some of the final chapters of her book, writing about the breathing exercises and meditation that help her keep all-consuming fear at bay. While she is thankful for Made in Chelsea, her spell as a scripted reality show celebrity ?was a really crazy time? and a stressful period in her life. Life after the show saw her ?working out what I wanted to do and finding a healthier path for myself?. With Made, it appears she has succeeded.