From the Corner of the Oval Office is a memoir from Beck Dorey-Stein, Barack Obama’s stenographer during the last five years of his presidency. It begins with Beck, unemployed and broke in Washington DC, on a fruitless job hunt. Desperate, she answers a vague job posting on Craigslist, which turns out to be a job in the White House as Obama’s stenographer, recording some of the most powerful speeches of his presidency on and off the camera.

Throughout the book, Beck flies around the world with Obama on Air Force One and learns to navigate the hierarchies of the ‘Vagiant’ (the nickname for senior female members of Obama’s team), all while excelling in her career. Although, her time in the White House isn’t without its own personal drama, as Beck’s relationship begins to unravel under the strains of her new job and she pursues a disastrous affair with a senior White House colleague against all good advice.

The following is an exclusive extract from From the Corner of the Oval Office. 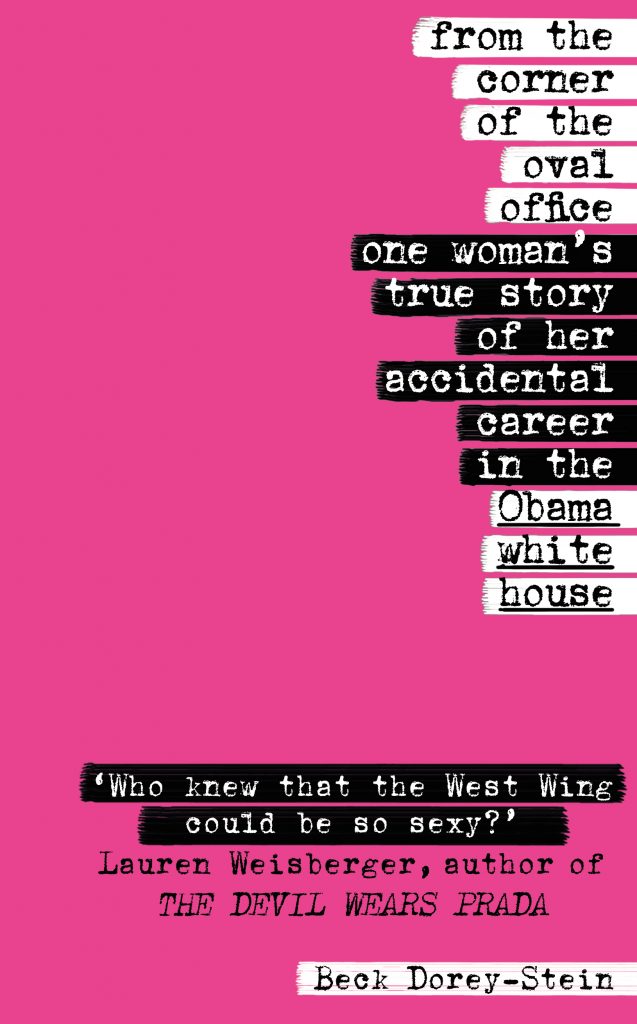 On a night like this, I pray for the voice of God.

Any minute now, President Obama will deliver remarks in the East Room of the White House. Across one parking lot, down three hallways, and up five flights of stairs in the Eisenhower Executive Office Building, I lie on the couch in my little office as the setting sun drenches the room in flammable orange. The Voice of God is the anonymous person who announces the president. I wait to hear him.

Any minute now. I’ve become so good at waiting. Remember when you were small, those rare nights when you would return to your elementary school after dinner to perform in the holiday concert or the spring play? You’d run ahead of your parents and past your sleeping classroom, toward the sound of kids laughing, teachers shushing. Each step pulsing with kinetic mischief, your heart racing to be in this sacred space at such a magical hour. Round the corner to the big kid hallway and there they are, all your friends, already lined up in their matching black pants and white button- downs, beckoning for you to join them because tonight, anything can happen. You’re in the right place.

Finally, I hear the Voice of God and walk over to the closed- circuit television to turn up the volume. A minute later, the president appears on the screen, cracks jokes, and takes his characteristic pauses before addressing the topic of the evening. He speaks eloquently, evenly, sincerely. Applause drowns him out when the president blesses the audience and the United States of America. I type the transcript, proofread it, and send it to the press office before zipping up my jacket, putting on my backpack, and closing the wooden office door behind me.

It’s past nine as I walk through the empty hallways at the end of the night. The black- and- white marble floor echoes with secrets and electric possibility.

For the past five years, this house was my home. For so long, this was the only place I wanted to be. Not anymore. Ever since November, each day here feels like a funeral. I have the hallway to myself— even the janitors in their blue aprons pushing their heavy cleaning carts are somewhere else. Doors left ajar reveal bare desks, naked walls, empty black frames, piles of paper next to overflowing wastebaskets. Each room diagrams a different stage of an inevitable divorce.

I walk through the slow automated glass doors of the EEOB and into the chilly darkness of another January night. From the top of the Navy steps, I see clusters of people loitering under the streetlamp after their West Wing tour. The only sound is the hollow clank of halyard against flagpole. This place already feels more like a memorial, less like the well- oiled machine I’ve known it to be. A full moon hovers just above the White House like a flag at half- mast.

This is my school. This is my house of worship. This is my everything— and it is disappearing with each passing day.

I walk by his car and drag my finger across the bumper, knowing agents are watching from their idling SUVs. After waving goodbye to the new guard stuck on night duty, I scan my badge, hear the buzz, the click, the groan of the gate, and walk out onto an empty Pennsylvania Avenue.