Skin deep: ‘Flatulence, carbs and awkward dates. This is life with Crohn’s’

If you’re one of the millions of people worldwide living with a chronic health condition, whether it’s itchy eczema or psoriasis; a hidden illness like fatigue, depression or PTSD; or a physical disability; you’ll know it’s not just skin deep. These conditions impact the lives of women every single day – physically, mentally and emotionally. Our latest series ‘Skin Deep’ dives into some of the most common and rare health conditions and shares the stories of the people who have them…

When Jade Hanley was booking her once-in-a-lifetime graduate visa to NYC, she never imagined cutting it short. Extreme cramps and diarrhoea, exhaustion and malnourishment quickly landed Jade in A&E in Manhattan. A short time later she was diagnosed with Crohn’s disease; a debilitating chronic inflammatory bowel disease (IBD) that affects the digestive and immune system in many different ways.

Around 20,000 people in Ireland are living with Crohn’s disease right now. Crohn’s causes the stomach to twist and turn and can result in intense episodes of bloating and discomfort. For client services executive Jade, a young woman taking her first steps on the career ladder, spending the day running back and forth to the toilet was not part of her plan.

Research is increasingly linking the stomach and digestive system to mental and physical wellbeing, dubbing it our “second brain”; affecting our mood, our mental functioning and our day-to-day comfort levels. And with the number of people diagnosed with Crohn’s steadily climbing, it’s time we got to grips and understand what it is and how best to treat it. Here, Jade gets real about living with Crohn’s.

Let’s get right to it, what’s it like living with Crohn’s?

So evil. I was diagnosed in 2017, one month before my 23rd birthday. I was on my J1 graduate visa in New York City at the time but because I was so sick, had to come home halfway through the year and cancel my internship. I was very sick for two weeks straight and ended up in A&E in Manhattan and was diagnosed four weeks later.

I have never felt so scared and vulnerable in my life. I’ve always had a pretty low immune system and dealt with IBS (irritable bowel syndrome) in the past, but this was on another level. I was in isolation for a few days in the hospital because they had no idea what was going on with my body – if it was viral, an infection, or something worse. I also had a cancer scare, so you can only imagine the fear. After I was diagnosed, there was a slight relief, but I was hit with a wave of depression. I constantly questioned “why me?” and felt very sorry for myself.

How did you know something was wrong?

As you can guess, a bowel disease doesn’t sound too pretty. Last year, when I was really sick, I suffered from chronic inflammation in all parts of my body; from my neck, arms, stomach, and legs, right through to the muscles and joints (one word: moonface). I’ve lost and gained weight more times than I can count. I was completely malnourished from constantly vomiting and going to the toilet to the point that I didn’t recognise myself in the mirror.

Thought I’d post something different on here for a change. I’m not one for posting about my personal life (I don’t need too much attention surprisingly) but I feel this is something that needs to be said and made aware of, even just for my own piece of mind and Instagram seems to be a good social media platform to raise awareness. I was recently diagnosed with Crohn’s disease which is a chronic inflammatory bowel disease. Not many people know exactly what it is or how it affects your body. Basically my large intestine does not like me at the moment and my body is an inflamed mess, which is affecting other parts of my body both physically and mentally. This all started two months ago while I was in New York and unfortunately this led to me having to cancel my J1 graduate visa so it’s been a difficult journey. I don’t know how long it will take me to get into remission but I’m still on the road to recovery. My friends and family have been amazing so I have to thank them for the support. Other than that here’s some sexy photos of me in my hospital gear ?? enjoy xx ps if you see me and I look like a chipmunk it’s cause of these goddamn steroids #chipmunkcheeks #crohnsdisease #ibd #irritableboweldisease #awareness #hospitalgownsareoddlycomfortable

How are you now?

I’ve been going through a good spell during the last few months and I’m in remission at the moment which is great. I have to really just take it day-by-day. It’s tough though because when my friends are heading out and doing things after work, my body tells me to go home and rest. Other than that, I’m moving forward. Staying positive is essential.

You work in a fast-paced industry that requires you to always be ‘on’. How do you juggle work and Crohn’s?

I’m young, but the energy levels are that of an 80-year-old. I go through phases of being full of life and energetic and everything falls into place. But it can turn just as quickly.

I’ve always made sure to get rest, eat well and listen to my body before the week commences. I also make sure I give it my all and work to the best of my ability so that my colleagues and managers can see how much I love doing what I do, despite having to take a handful of sick days every so often.

Do you have a self-care routine?

I love a good bath. Whenever I have muscle or joint pain it really relaxes and soothes me, especially if I’m feeling anxious. I also love using face masks. Right now I’m using Image masks and my skin looks and feels amazing afterwards. I was on steroids last year to treat my Crohn’s and I broke out in bad acne and dry skin as a result. Image Skincare has been my saviour.

Flatulence: talk to me.

I drink a lot of liquids to help with that, but that also helped the bloatedness and so the cycle continues. I’m very aware if I’m in the toilet for longer than 5 minutes – especially in work (and most of the time I am). It’s an embarrassing disease to have, especially for a girl. A few of my male friends would always mess around and say that “girls don’t do number 2’s, they just don’t”. Going the toilet is a completely natural part of being human, and we shouldn’t be embarrassed by it, but I do because of the stigma associated with it. That’s the problem with being a girl in this situation, it’s embarrassing and no one likes explaining their toilet troubles.

I’ve known my boyfriend Dave since I was thirteen years old. We were (and still are) the best of friends. Before we started going out we would talk to each other about everything and anything (besides my toilet troubles). We started officially going out at 18 and soon after that things started going downhill for me and my bowels. I started getting the runs constantly, letting out a lot of gas, bloated stomach, the whole lot. It got to the point that I just had to rip the bandage off and be like “okay look – I go to the toilet more times than the average person, if I fart it’s because I genuinely can’t hold it in or I’ll explode and if I eat that pizza we just ordered, prepare to pause the movie for 25 minutes, at least”. The result? He didn’t care in the slightest! 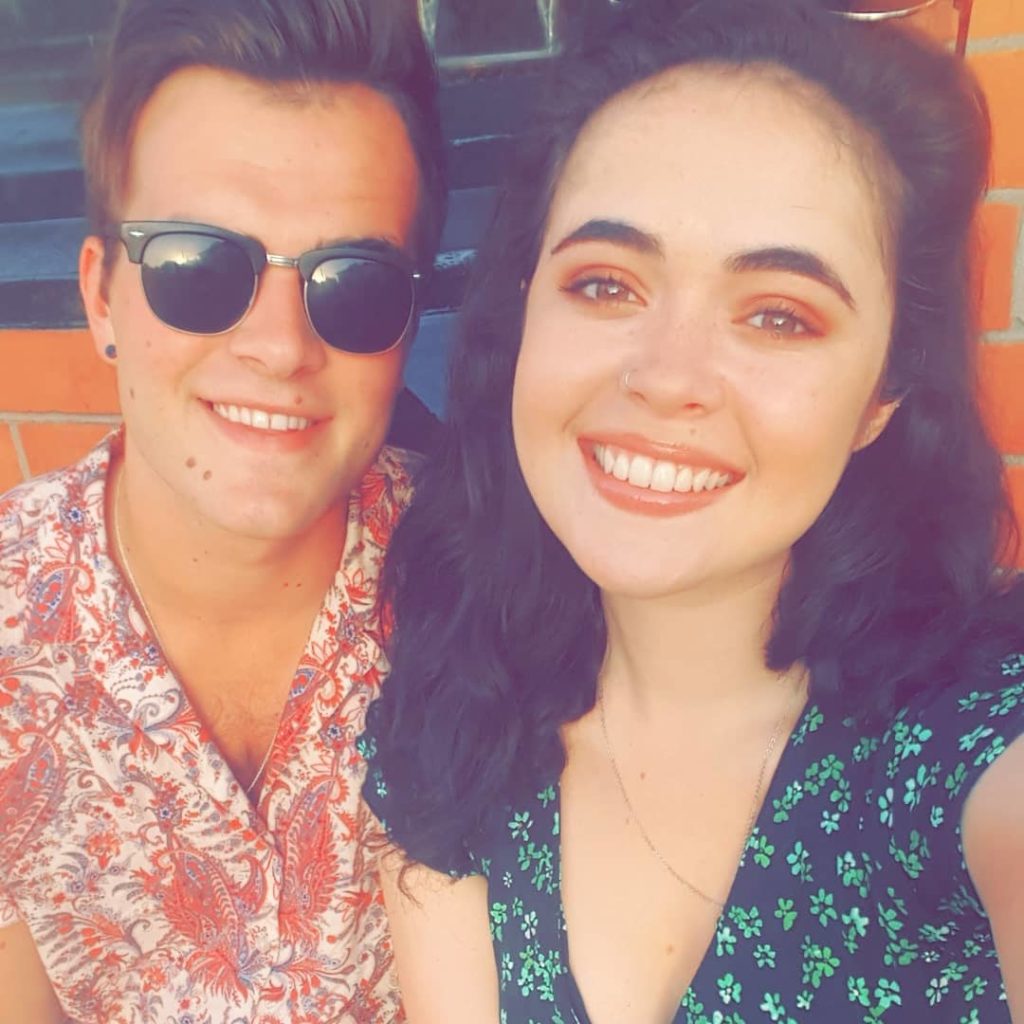 So, how has Crohn’s disease affected you on a day-to-day basis? Do you feel restricted by it?

Yes, big time. I don’t feel comfortable doing the same things I used to do before the diagnosis. I know a lot of it is in my head, and I’m trying to get over that. I believe in mind over matter 90% of the time, but I’m still a little apprehensive about a few things. I want to push myself and get back playing hockey this year, too.

Peppermint tea. I used to take a lot more medication which made matters worse, but thankfully I don’t anymore. I cut out gluten and dairy and I’ve seen a massive difference. Intolerances are so common these days, I would definitely recommend anyone with toilet troubles to get themselves checked. The problem could definitely be your diet.

What is the shittiest(!) part about living with Crohn’s?

I’ve had such a bad relationship with food since I got diagnosed that I don’t even know if I will ever enjoy it as much as I used to. I love pizza, so I seriously miss that. One part that has been difficult is my mental health; the medication, depression, and anxiety about everything can occasionally get the better of me. I felt alone at first, but there are support groups available and I volunteered for the Irish society of Colitis & Crohn’s disease, which helped for a while, but I got too sick and busy with other commitments to keep up with it, which is a shame. Thankfully, I have my family, close friends and another-half for support.