‘The best of 2019’: Twitter reacts to watching Netflix’s The Irishman

The Irishman is coldly enthralling, it vividly depicts the glamour of mobster life in the 1950s. But even the most powerful figures in organised crime can’t escape the harsh reality of ageing in this sprawling epic. The lack of women’s voices is highly noticeable, but this is Scors­ese’s best in years. Read on for our review and some social media reaction

In 2019, it seems the greatest directors among us fear their best days have been and gone. We saw it through the kaleidoscope of melancholy in Quentin Tarantino’s Once Upon A Time In Hollywood, and now Martin Scorsese takes a cooler approach on the subject. The Irishman (premiering in cinemas next week and released on Netflix November 27) isn’t a warm feature. It’s slick, modern and long, clocking in at three-and-a-half hours running time. But it has the same impact – you know you’re watching a master craftsman at his best: a film that’s steely, ominous and stylish.

Scorsese, working from a script by screenwriter Steven Zaillian who adapted the 2004 memoir I Heard You Paint Houses (a eu­phemism for splat­ter­ing the walls with blood), tells the true story of Frank Sheeran (a brilliantly refined Robert De Niro), a World War II veteran and unassuming truck driver who, in the 1950s, suddenly finds himself drawn into the criminal orbit of Russell Bufalino (a fantastic, elegant Joe Pesci), the sinister boss of the Pennsylvania-based Bufalino crime family. 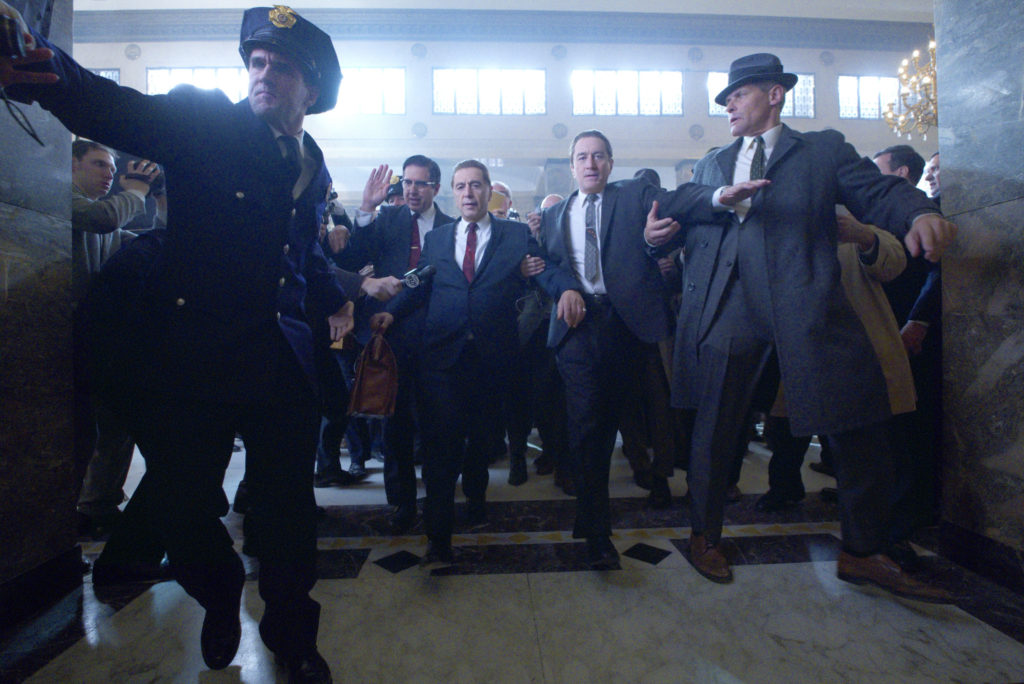 Sheeran, who quickly became a trusted mob soldier and hitman, rose through the ranks and was required to work alongside fellow mob boss Jimmy Hoffa (played by Al Pachino, who gives the most extraordinary performance of the film). Hoffa was no ordinary public figure – the labour leader was hugely popular with his Teamsters Union and mired in underworld connections (obviously) – so the pairing seemed a natural choice. Sheeran served as Hoffa’s right hand for years and the two became firm friends, their families intertwined, until a problem surfaces: the top bosses, Hoffa and Bufalino, begin to clash and Sheeran, loyal to both, is caught in between the two.

The film depicts the ebb and flow of the mob underworld in the usual Scors­ese style – with echoes of his previous gangster films obvious throughout – but is fresh and new at the same time. There’s also plenty of black humour throughout which eases the ever-building tension but Marty avoids the pitfalls of say, The Wolf of Wall Street where the scenarios never veer too over the top even while trying to get a laugh from the audience.

If you’ve heard anything about the film, you will have heard of the revolutionary de-ageing technology the director used to make younger men of the now aged, veteran actors (the story spans decades so we meet them from their thirties onwards). If you think it’s a gimmick, it’s not, and it’s so artfully done, that you very quickly forget it’s been applied at all – such is the skill of the actors on screen. In the hands of lesser actors, using such drastic techniques might have posed a problem, but these are not lesser and it shows.

They age into their later years (as well as regain youth) and Scorsese goes to great pains to show that no matter the man, age finds a way to humanise and make vulnerable even the most powerful

Ultimately, it’s a slow burner, one best taken in at a leisurely pace, taking note of the differing narrative threads. 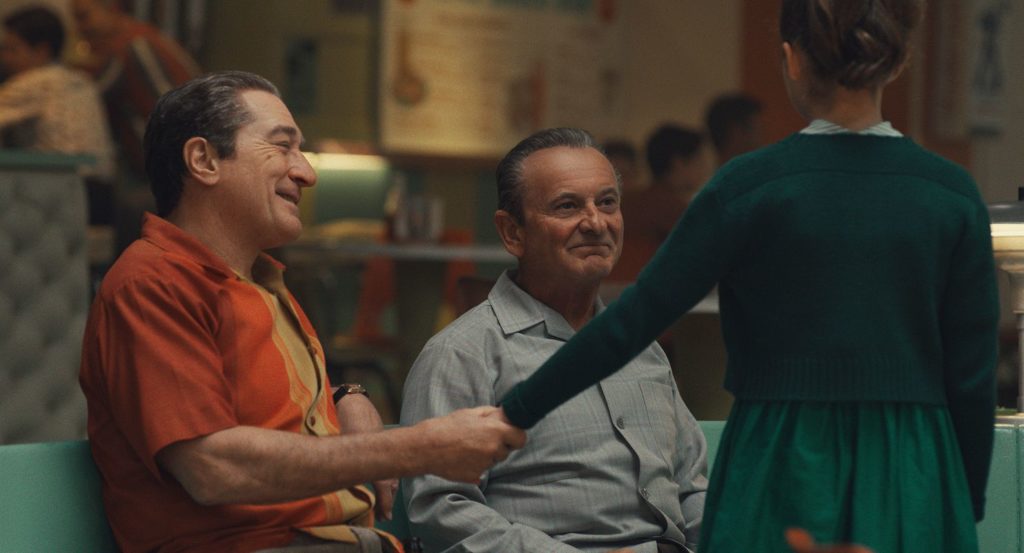 A lack of female voices

The absence of women’s voices in The Irishman is particularly glaring; [Anna Paquin] says so few words you’d forget she was there

For all the film’s highlights and even though this is a male-dominated film, the absence of women is notable. A mention must be given to actress Anna Paquin who, playing Peggy, the adult daughter of Sheeran, says so much, while saying nothing at all. She’s enigmatic on screen but even so, her silence and the absence of women’s voices in The Irishman is particularly glaring; she says so few words you’d forget she was there, and the other females in the film serve as token wives who also have little to say. Lucy Gallina, who plays the younger version of Peggy, is much more prominent. But they still both have a noticeable lack of dialogue. Both Gallina and Paquin do a lot with the little they’re given to work with — and it speaks volumes about the skill of both.

“If the story doesn’t call for it…It’s a waste of everybody’s time,” is what the director said when asked of this at a press conference and while he makes a valid point, he’s never gone out of his way when it comes to featuring multi-faceted, diverse female characters on screen. And it’s noticeable and a shame.

In an era when we’re seeing the rise of women both on screen and behind it – Scorsese’s reasoning that Paquin’s character is more powerful saying only a single sentence throughout, is an interesting one, to say the least, and will no doubt be the subject of much debate.

Here’s what Twitter had to say about the Netflix premiere on Wednesday:

#TheIrishman is not just another Martin Scorsese gangster drama. A much deeper film about what loyalty means, what brotherhood means. It portrays duty, betrayals, regret and mortality in a way I haven never seen before. The absolute best of 2019. pic.twitter.com/3YQNXfR4Bo

#TheIrishman is definitely a different kind of film to the usual mob capers, don’t expect a Goodfellas or Casino. Pacino, De Niro and Pesci are great though and will no doubt receive deserved acclaim. The last half hour is the kicker for sure. Nice work Scorsese.

The de-ageing effects for Pesci and DeNiro are so incredibly done, its like watching Pesci back in Goodfellas days when it first came out #TheIrishman

#TheIrishman is available on Netflix today. It’s a movie Martin Scorsese and Robert De Niro have been talking about making for decades. It was worth the wait. https://t.co/cHsEXzTGWa

#TheIrishman – At 209 minutes it is a long film (maybe the longest that I’ve ever seen) but every minute is necessary. It’s a very detailed story which fleshes out the characters well and brings to life the true events and people behind it. A great drama overall.

#TheIrishman is classic Scorsese ?
It feels like Goodfellas & Casino with how the story is being told but it’s also still very different.

DeNiro & Pacino killed it & Joe Pesci ‘s role was a different than what he usually plays but he was great too!

A film like what they used to make. Class is permanent. What a swan song for some of the greats of cinema #TheIrishman #irishman

#TheIrishman had all the film craft and brilliance of Goodfellas and Casino but with real melancholy and heart. What a movie.

I just finished #TheIrishman it was just brilliant. A wonderful film, they are all so good. The real gift is seeing them all together again. For me it is just seeing Joe Pesci again, and he is at his terrifying best. That sitting close in your space, it is masterful.

The Irishman is now on Netflix